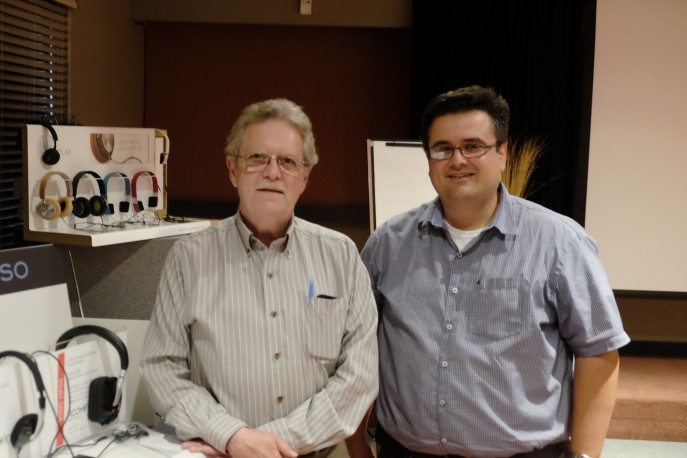 So during this summer, my good friend Frank Iacone drove up to Toronto, Canada with his family for a visit. It was great to see my longtime friend and his wonderful family, but we also had some business to take care of…that was to meet someone in the audio world that we’ve both admired for a long time: Mr. Paul Barton (the Founder and Chief Designer of PSB Speakers). Both Frank and I have both owned PSB Speakers through the years and have always been impressed with their sound and performance; especially when comparing them to much more expensive gear.

The visit started with a brief introduction to Paul and the history of PSB Speakers. Paul actually started PSB Speakers while he was an engineering student at Waterloo University in Ontario. Having gone through 4 years of engineering in Ontario (at the University of Toronto), I was amazed how Paul found any time to set aside to create any company, let alone a internationally renowned audio company!

I barely had any time left over for my girlfriend (now my wife) or much of a social life; let alone working in a startup for which I would be fully responsible.  Long before Paul studied engineering, his first love was music and playing his beloved violin. In fact, his father was skilled enough with his knowledge of both woodworking and acoustics that he built Paul his own violin.  Paul mentioned how impressed he was with his father to do this and to take the time and put in the work to build a son his own violin, certainly is a testament to his father’s workmanship and support for his son’s love of music. I was happy to find that Paul and I shared many similarities during our meeting.  Like Paul, before I completed my studies in Engineering in an Ontario university, we both came to this profession being previous lovers of music. Paul is a violin player and my instrument was the trumpet. While I have to admit I’m not the huge fan of classical music that Mr. Barton is, I do appreciate it very much.

A few years ago, The Lenbrook Group (owners of PSB Speakers) acquired the world renowned British audio company NAD. This acquisition has brought to their portfolio a very highly respected company that can offer products upstream of their impressive speaker offerings. Everything from CD players to digital-to-analog converters (DACs), to amplifiers; a one stop solution for all your 2 channel needs. As well, both PSB Speakers and NAD Electronics have ventured into the world of personal audio with the release of the highly touted PSB M4U 1 & 2 and NAD HP-50 headphones. I have owned both and thought they both sounded incredibly clean, natural and balanced. The trend of more and more bass has been concerning to many audiophiles like myself and it’s great to see audiophile products released to the public that can show the youth of today just what good  sound really is. We were told that new inner-ear monitors were going to be released soon and both Frank and I were very excited to be able to review these for Headphone.Guru when they were released; especially knowing how impressed we were with their full sized headphones.

Being both engineers and having a solid appreciate for an objective approach to audio, Paul and I discussed his pioneering work with the NRC (National Research Council) in our nation’s capital Ottawa. Previously many speakers had their “unique sound” and there was a great amount of variability from company to company or even region to region. Objective measurements and actual scientific study of the area was limited at best. This is where Paul Barton and PSB Speakers came to forge a new way that helped revolutionize the industry.

With their leading work in psychoacoustics and how the human ear / brain decipher what is being heard substantially changed on what audiophiles demand from their systems. I’m a Lean Six Sigma Black Belt as well, and a very common saying we use in the world of manufacturing engineering is “you can’t control what you don’t measure”.  I’ve been a big proponent of this my entire career and see no reason why I shouldn’t take this stance in my non-professional life.  With both the PSB M4U ½ and NAD HP50 headphones, you can find that their measurements are simply outstanding and rival the performance of headphones 2-3X their price point. This was not by coincidence as Paul’s philosophy and understanding of psychoacoustic affects and driver performance was rolled into these new products from the outset. The one difference from the traditional Harmon EQ curve with particularly the NAD HP50s was that the designers included a few more dB in the bass region to account for the regular “room gain” that a 2 channel speaker system will automatically pick up as a result of the resonances in the room. This did go a long way in making the HP50s sound more like a great pair of speakers than just a mid-priced pair of headphones.

Frank and I had a great afternoon at The Lenbrook Group. We got to meet with someone we’ve both held in very high regard in the audio world; a true pioneer and trend setter. Paul’s knowledge of audio, technology and how the human ear pulls all this information together was truly impressive. The facility tour was equally impressive; especially at the end when Frank and I got to hear the newly released PSB Imagine T3 full sized speakers! Wow…they performed as well as any $10000+ setup I’ve heard. That’s always been the great thing with PSB, you get objective level performance that rivals equipment costing substantially more. The power, dynamics and transparency of this 2 channel setup had me re-thinking how good my buddy’s substantially more expensive Dynaudio setup was (even though it cost almost 3 times more).

Frank and I would like to thank Mark Stone (Marketing Manager) and Denise Babin (Marketing Manager) at Lenbrook Canada for setting up this meeting with the man himself: Mr. Paul Barton. It’s not often you get to meet people you’ve admired for years, and it’s even less often that they live up to those expectations; but meeting Paul was certainly a very special day for us and the ability to just talk about audio was one fantastic learning experience for the both of us.

My first introduction to PSB was in 1996. I had  been  hearing rumblings on the magnificent Stratus Gold Speakers and after auditioning them I purchased the pair. Thats was a the beginning of life long admiration for Paul Barton and all he was able to accomplish in loudspeaker design. When Peter Pialis suggested we go and visit with Paul,  we set the meeting up with the help of Denise Babin and Mark Stone. The visit for me was a dream come true. I finally had the opportunity to meet with Paul. After the visit with Paul and his explanation of how he designs speakers and headphones gave me  a better understanding of his design philosophy. The PSB and NAD headphones are both legendary products in the headphone community and more importantly excellent value for the money .

The visit with Paul made me understand from  an engineers perspective why measurements are so important in design.  As for personal audio and its contribution to high end music listening Paul Barton gets it. He understands why it is so important to get the next generation of music lovers to enjoy everything full range speakers can offer by designing high end headphones at realistic prices that sound Right. He understands the importance of cultivating the next generation of music lovers and ensuring the future of High End  Audio. I am grateful for the opportunity and thank Denise,Mark and Paul for making this visit a reality. I look forward seeing Paul Barton  again. Thanks Paul for all the years of musical enjoyment.