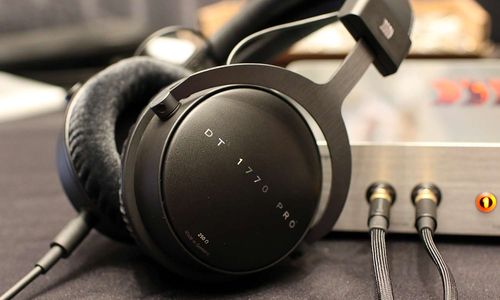 Frank Iacone sent me an absolute gem, the new Beyerdynamic DT 1770 Pro ($699). Their first professional headphone utilizing the Tesla 2.0 Technology, similar to that found in their flagship, the new T1.2 ($1,299, reviewed here). Beyerdynamic, USA states, “They are the number one choice for music producers, sound technicians, and broadcast users and are a firmly established piece of equipment in studios worldwide.” I have a feeling that many Head Fi’ers and audiophiles will make the DT 1770 Pro their travel and private listening headphone of choice.

In the audio press there is an underserved minority, Southern Americans — no not Chile, but Kentucky. This review will not focus on the superlative manner in which the DT 1770 Pro presents Bluegrass (a sigh of relief from the collective readership), but the music selection is a bit eclectic. My musical taste ranges from the aforementioned Bluegrass to Grand Opera, and everything in between (cliché, my apologies). Hopefully, my taste will cross yours at some point, someone out there has to love mono recordings of Wagner.

A brief introduction, since this is my first review for Headphone.guru. I am a music lover first (yes I know, that’s what we all say, but it’s true in my case), with a diverse taste in music reflected below. To me equipment is just a means to an end, it’s all about musicality, tone, can it bring me as close to the musical event as possible, whether live or in the studio. I started as a “two channel guy” in 1984, progressing to 8” Soundlab 845’s, Krell, well you know the shtick. Life required a downsizing, and my Daughter and Wife informed me the two channel system was disturbing their tranquility in our new abode, necessitating my move into headphones and Head-Fi. Even with my open headphones, my youngest Daughter, with the ears of a bat, complains about my late night listening sessions, Highlighting the necessity of finding a closed alternative

The Beyerdynamic DT-1770 Pro, with 45 mm dynamic Tesla 2.0 neodymium drivers, two detachable mini-XLR cables (straight and coiled), both with 1/8” jacks plus screw on 1/4” adapters, as well as velour and leatherette pads. Additionally, Beyerdynamic provides a handy travel case, while it won’t be mistaken for the one supplied with Audeze Headphones, it’s quite serviceable for a product at this price point.

First some general impressions, the bass is terrific, the highs are extended, depth presentation is excellent, especially for a closed Headphone, and did I mention that the bass is extraordinary? For the most part, the bass steers clear of bleeding into the midrange (a few exceptions identified in my musical track specific notes), it is articulate and kicks like a mule when called to do so. Highs are extended and relatively smooth, avoiding some of the ragged treble peaks associated with earlier Beyerdynamic offerings. Soundstage (head stage) depth is quite good; width is truncated versus better open designs though the importance of this is offset by the choice of musical genre.

My iPhone 6 Plus didn’t quite have the mustard to make the DT-1770 Pro’s sing, but adding either the iFi Nano iDSD or the Apex Audio Glacier remedied that issue. Further up the pecking order, the Auralic Taurus Mk. 2, while an excellent match, showed that the DT-1770 Pro doesn’t scale as well as flagship offerings, like Beyerdynamic’s T1.2. This is also true with higher resolution music, from Tidal to DSD the presentation is similar, that is to say, excellent with many genres. Speaking of which, let’s delve into some specific tracks and comparisons to other headphones.

Not to long ago Head-Fi User, “potkettleblack” (Lee), recommended some tracks that would show off the famous Audeze bass to use auditioning the LCD-3f and LCD-X. Lee’s recommendation I choose to use in this review was Hydro “Cohere” off of Broken Audio Records CD “Raise the Bar”. Well, Audeze, Beyerdynamic can play the bass game as well. If you only listen to one track when auditioning the DT-1770 Pro, this is it, concussive, driving, powerful bass will be served up for your listening pleasure. In contrast, the less expensive AKG K7XX sounds muddy and lightweight, HD800 may be slightly more articulate, though at the cost of depth and power. The LCD-3f, at a premium of over $1,300 was superior, as it should be, but then again, I am partial to the bass presentation of planers.

On the Jazz front, Lou Donaldson’s “Play Ray” off of his album Blues Walk showcased the very good depth presentation of the DT-1770 Pro. Though the limited stage width left Lou, Herman Foster-piano, Peck Morrison-bass, Dave Bailey-drums, and Ray Barretto-congas playing in a long, narrow hallway. Here is where the far more expensive HD800 came into its own, yet again delivering the famous (or infamous depending on one’s perspective) sound stage. A closer comparison, especially considering that many will use the DT-1770 Pro, is Alclair’s fabulous RSM Quad Custom CIEMs ($649). Here we have a wash — the RSM Quad had the better width, the DT-1770 Pro depth, though the in-ears couldn’t touch the DT-1770 Pro’s bass depth and impact (as one would reasonably expect) and the RSM Quad’s detailed monsters.

With Porcupine Tree’s, “Prodigal” from Absentia, the bass again took center stage, though with just a touch of bleed into the mids. On this progressive rock track, the DT-1770 Pro was a marvel, with an excellent presentation, no stage width issues at all. Again, a far cleaner, clearer picture into the music than the less expensive AKG-K7XX and I kid you not; the DT-1770 Pro’s stood shoulder to shoulder with the mighty Audeze’s LCD-3. Here bass was a virtual tie while the LCD-3 a bit (ok a lot) more midrange body while offering similar stage depth, more stage width, and being a tad more resolving.

One of my favorite tracks of all time, off of one of my favorite albums is Little Feat’s “Spanish Moon” of “Waiting for Columbus”. I spent many a night boogieing to this Album during my tenure as an undergrad at the University of Arizona in the late 1970s and early ‘80’s. The DT-1770 Pro reminds me of why I love this performance as much as I do — the driving bass intro, the forceful interplay of the organ and bass, and the deep, deep soundstage where the Tower of Power Horns were doing their funky thing. Here the HD800’s again presented the sound space as only they can do, but gave up a lot of the funkiness offered by the DT-1770 Pro. The RSM Quad’s again offered incredible detail and resolution, but like the HD800’s they lacked the soul of the DT-1770 Pro.

The Flaming Lips are as unique a band as offered up by Austin, Texas. On the title track of their seminal album, “Yoshimi Battles the Giant Pink Robots” all of their strangeness shines through. While I preferred the LCD-3f’s, considering the price differential, open vs. closed, and their former flagship status that is expected. The DT-1770 Pro’s again easily bested the AKG K7XX (I am not picking on them, I promise, they are very good headphones at their price point). The resolution, clarity, and again with the bass, was excellent with the DT-1770 Pros, surprisingly so for a closed headphone. On this track, the Alclair RSM Quads resolution was also very pleasing, but again they were bested by the formidable bass provided by the Beyerdynamic Headphones.

Another resident of Austin is Lyle Lovett, once upon a time Mr. Julia Roberts. His music can range from sardonic to deeply moving, for the latter it probably helps if you are a Texan. The New York Times referred to Lovett as, “the thinking man’s cowboy.”  His Compact Disc, “Live in Texas” includes a version of his track, “North Dakota” with Ricki Lee Jones singing backup vocals. It is a sparse recording of Lyle on piano, with bongo drums at stage left, a bit behind the plane of the piano, and Ricki Lee Jones in the same position to the right. Beyerdynamic’s DT-1770 Pro renders this song beautifully. Rich tone, presenting the piano faithfully, the air around the performers, and a bit of a dichotomy, an intimate but spacious recording. Here the LCD-3f shine at the higher end of the audiophile spectrum, flowing forth with the rich midrange presentation that is Audeze’s forte. Though the DT-1770 Pro is far from being embarrassed by its much more expensive, planer competition, they hold their own with many kinds of music genres. Here the Beyerdynamic offers a richness of presentation the Alclair can’t match, also besting the AKG K7XX in clarity and musicality.If the DT-1770 Pros have a weakness, it is found with classical and chamber music. Here soundstage is critical, at least in my mind, to experiencing and enjoying the musical performance. As is to be expected with classical the HD800 is the champ, followed closely by the LCD-3f, and the AKG K7XX acquits itself quite well. I would say that this may be the Achilles’ Heel of the DT-1770 Pro, but I am surmising that many who purchase this headphone probably will favor EDM to Elgar. Given this, on Dorati’s recording of Stravinsky’s “the Firebird Suite” with the London Symphony Orchestra the DT-1770 Pro’s “narrowish” stage subtracts from the arrangement. While the depth remains very good, especially for a closed headphone, but the tight stage sounds unnatural.

Nevertheless, intrepid reader, before you abandon all hope for the DT-1770 Pros with classical music, they performed incredibly well on one of my favorites, Joseph Keilberth’s 1952 Bayreuth recording of Richard Wagner’s Der Ring des Nibelungen. The great Robert Levine stated that this recording was, “The tightest, tautest, most energized recording available” of Der Ring des Nibelungen. Now before those of you who love your EAZY-Z served up nasty or Matoma throbbing scoff, pick yourselves up a pair of DT-1770 Pros and give my German Homey R. Wag a listen.

Beyerdynamic has delivered with the new DT-1770 Pro Headphones. If you are looking for a closed headphone for rock, rap, EDM, small ensemble jazz, progressive, you need to audition these headphones. Their shortcomings are few, and positive attributes; musicality, bass, clarity, sound stage depth are exceptional. The DT-1770 Pro acquits itself quite well in comparison to headphones that are significantly more expensive and bests everything I have heard at its price point.  If you are looking for a pair of headphones for travel, the office, or personal listening you really should audition Beyerdynamic’s exceptional new offering the DT-1770 Pro.