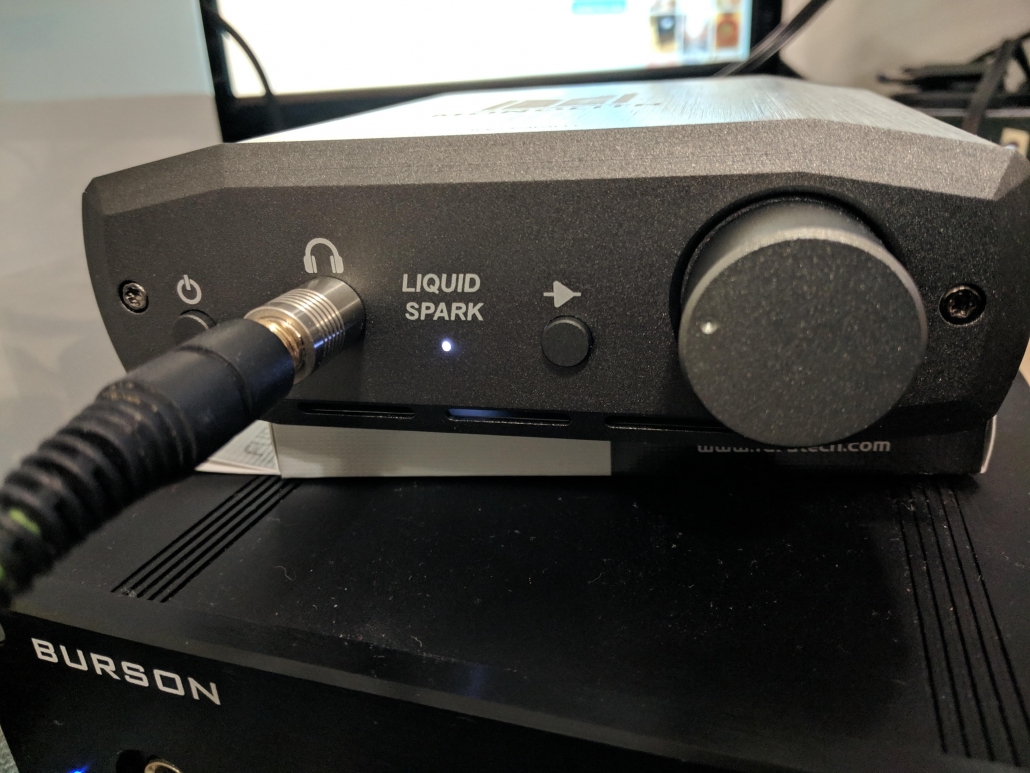 The name Cavalli sparks immense respect in the audiophile community. Their amplifiers have world class renown in the headphone audio community and their “Liquid” naming scheme legendary amongst all those in the know.

Cavalli Audio officially closed up shop in 2017  but all is not lost. Through a partnership with Monoprice and their Monolith line of products, Alex Cavalli is back at it lending his design expertise with a new product called the “Monolith by Monoprice Liquid Spark Headphone Amplifier by Alex Cavalli”. It’s a mouthful for sure but the key idea here is that “Liquid” amps are back and this time we have an entry-level amplifier at $99 built with a fully discrete stack. There are no op-amps or capacitors in the signal path and instead, it relies on traditional transistors like JFETs and MOSFETs to amplify. It’s able to deliver over 1.3W of power with a 50 Ohm load which is more than most headphones will ever need.

Just as Cavalli Audio’s products ignited the world of headphone audio on fire, we’re here today to see if the Spark can do the same with Monoprice taking the helm of the ship this time.

The Liquid Spark is a much simpler design than most of Cavalli’s prior products. It uses a clean metal chassis with a slotted PCB approach allowing for quick assembly and churn-out. It’s more akin to the JDS Lab O2 design where you have a hollow shell with a front and rear plate screwed on.

At $99 for a Cavalli designed product, there are some rougher areas in the build compared to his previous products, which does make sense. The front and rear plates are rocky and are not always flush with the middle shell. It’s definitely an assembly line product through and through using approximate interchangeable parts. At this price range, most users would agree that they would rather have the better listening experience than a smoothing out of the chassis build. A fine trade-off if you ask me to keep costs contained.

The laser etched Monolith logo reminds us that this is a Monoprice product. The mention of Cavalli is 2mm tall and parallel to the front shield and definitely something that can be easily missed. As such, this amp is mainly available through the Monoprice web store and it is the recommended place to purchase one. With a (relatively) timeless company like Monoprice backing the Liquid Spark, RMA, warranty, and long term hardware support should bring buyers peace of mind.

The Liquid Spark has the essentials of 2018 that were not available on ‘entry’ level amps in years past. It has a gain select, a dedicated power button, a stabilized volume wheel, RCA line inputs, and RCA pre-amp outputs. Another nifty feature, that has become very popular in the last few years, is the auto-switching output between the single-ended 1/4″ headphone output and the RCA pre-amp. You used to need an additional switch to select between headphone output or RCA output, but the Liquid Spark will automatically switch to the pre-amp out if the headphones are unplugged. It also comes equipped with an automatic startup mute to prevent a bootup pop or surge to your headphones. $50-100 used to get you an Altoids can DIY amp with no creature comforts and the need to be electrically wary of pops and buzzes.

Using speakers with the Liquid Spark have never been easier. Simply wire up your DAC’s output to the “I” (Input) on the Spark and your Speaker Amplifier or Powered Speakers to the “P” (Pre-Amp Output). When you are finished listening to your headphones, simply unplug them and your music auto-magically comes out of the speakers. This does introduce slight wear on the headphone connector and the quarter-inch jack on the Liquid Spark, but I abide by the idea that you can either keep your stuff in pristine spit shine condition or actually use it.

My unit came from Cavalli himself and was not a retail product. It produces some worrisome electrical ‘sparks’, true to its name, when the unit is plugged in while the power button is in the “ON” position.

The Spark has power to spare on even planar magnetic headphones. On High gain, I rarely would push it past halfway on the knob. On the other end of the spectrum, with low impedance less than 16 Ohm CIEMs and Low gain, I experienced no audible buzzing or hissing with the Liquid Spark; everything was dead quiet. Since this is an analog design, there is a channel mismatch at the lowest end of the volume spectrum which is detectable on my CIEMs; this is to be expected and not something to ding the Liquid Spark points on. The volume level discrepancy is only noticeable at volumes too low for anyone to ever listen to music at. The Spark has proven itself to be very adaptable and shocked even me at how wide a range of headphones it could take. The other two amps on my desk, that were much more expensive, were geared towards high impedance headphones and had obvious background hissing with the CIEMs.

On my desk currently sits a Burson Swing (DAC) and Fun (Amp) stacked, with an Objective 2 nearby employing an internal AK4396 DAC as source, and two different Swan Song Audio Amp/DAC combos. The Liquid Spark is connected to the Burson Swing’s SABRE 32/ESS9038 DAC using its dedicated “DAC output” bypassing any internal pre-amps.

I’m unabashedly a fan of amps on the warmer end of the spectrum rather than the colder side. The Liquid Spark is definitely a ‘warmer’ sounding amp and is more direct and poignant with how it goes about its day. It doesn’t have many tricks up its sleeve and is more fundamental with how it approaches sound. I’ve also noticed that the Spark almost has a central layer or filter to its sound with more oomph and wider girth on notes making it seem ‘hotter’ than it actually is, like flame decals on a car.

It has that dash of warmth thanks in part to its pronounced low-end and slightly pulled back midrange. But just like how the flame decals play an imaginary perceived addition of speed, so too, does the Spark with warmth. Deep down, it has a surgical air around it, being more direct and to the point than my other amps and is more business-like. The Liquid Spark is uptight most times and proper but when you prod and really get to its base, you realize it has good humor and warmness behind its mask. The flame decals or warmth on the Spark are like the hot sauce that goes on a good taco, it adds to it and tries to make you think it’s hotter than the base material truly is.

“1br/1ba” by Vienna Teng is the first song I’d like to address in this review. Thanks to our sponsors at Qobuz, I’ve been using their recommended “Qobuz WOW!” playlist regularly and have been impressed at some of the tracks they have chosen. The song “1br/1ba” has this cozy sense of spatial-ness to its theme and is more akin to a stage play as elements come in and out at seemingly random moments. The Liquid Spark has a shallower sound stage than say the “FUN” but holds its own by providing still a reputable recreation of the play that is unfolding. The Spark has a cushier soundstage and spatial representation making it more adept at modern tracks. Too much in surround elements isn’t always better and can be detrimental to some songs that were not meant to have a wide stage presence.

Detail in the vocals was good on the macro side but a bit lacking when it gets to the finer points. The whole picture that is presented with the Spark made for a pleasant and comfy listening experience. But when digging through to the true details, I noticed that the Spark is still (obviously) a newcomer compared to units that are often multitudes of costs greater than it. For the price, it does an admirable job as an ‘audiophile’ amp for those on a budget with what it is producing thus far.

Next up is “Re:Re:” by Asian Kung-Fu Generation played through Qobuz. The Liquid Spark was without a doubt obviously deeper in the lower octaves in tonality and had a dark wooden timbre with the mids which surprised me. If it had a color, I would say dark brown and very earthy, which could be due to its increase in bass presence. I’ve noticed that the bass output of the Spark is temperamental and works in some situations and doesn’t in others. In higher quality tracks from the 80s and 90s, that often lack any bass at all, the Spark helps immensely by giving it that added oomph to the low end, making it feel less archaic. On a modern already low-end heavy song like “Re:Re:” made for TV shows, the bass was overwhelming and slightly boomy. The versatility of the Spark is also a double-edged sword, it works with a massive variety of impedance loads, and seemingly has everything to a fault, but to a discerning audiophile, it does have cracks in its liquidy flow.

Lastly, I’d like to introduce some high-quality rock to the mix with “Killing In the Name” by Rage Against the Machine, also through, you guessed it, Qobuz. This song works phenomenally well with the Spark, more so than the other higher end amps on my desk. The more intimate midrange, with the reduction in some detail, while prioritizing macro elements fits this song better in terms of enjoyable listening experience. It’s less “audiophile” but is headbanging certified. The more confined feel of the Spark works wonders here and shows an example of how immense soundstage and frontal vocals are not always the best way to enjoy a song.

Guitars and string instruments had more pronounced girth and wider presence with the Spark as well, which added to the song in my opinion. It isn’t a super quick amp and that’s ok. The resonance of each strum and the heat coming off each note made for a better song.

The mouthful named “Monolith by Monoprice Liquid Spark Headphone Amplifier by Alex Cavalli” is an interesting amplifier added to the mix of options at this price range. Its primary competitors include the Objective 2, JDS Lab’s Atom, and the Schiit Magni. The Liquid Spark is by no means a true end all amplifier as some users new to headphone audio might see it as just because it has the Cavalli name. Its soundstage is average and the layering pronunciation of mid and low end it adds to the sound isn’t universal to everything that can go through it. But despite all this, the musicality it brings to the table and adaptiveness it has to almost every headphone you can throw at it and its modern feature set brings bite to the table.

I would recommend the Liquid Spark to new headphone audiophiles on a budget with a more modern taste in music that like more oomph and bite to their music. The Spark has plenty of power to accommodate almost any headphone upgrade and the usefulness to be used with low impedance in ears as well.

(Note: since the writing of this review the housing of the Monolith by Monoprice Liquid Spark Headphone Amplifier by Alex Cavalli has undergone a redesign for production for better fit and finish, we are assured by Monoprice that the internal circuits are unchanged. See the image below.)