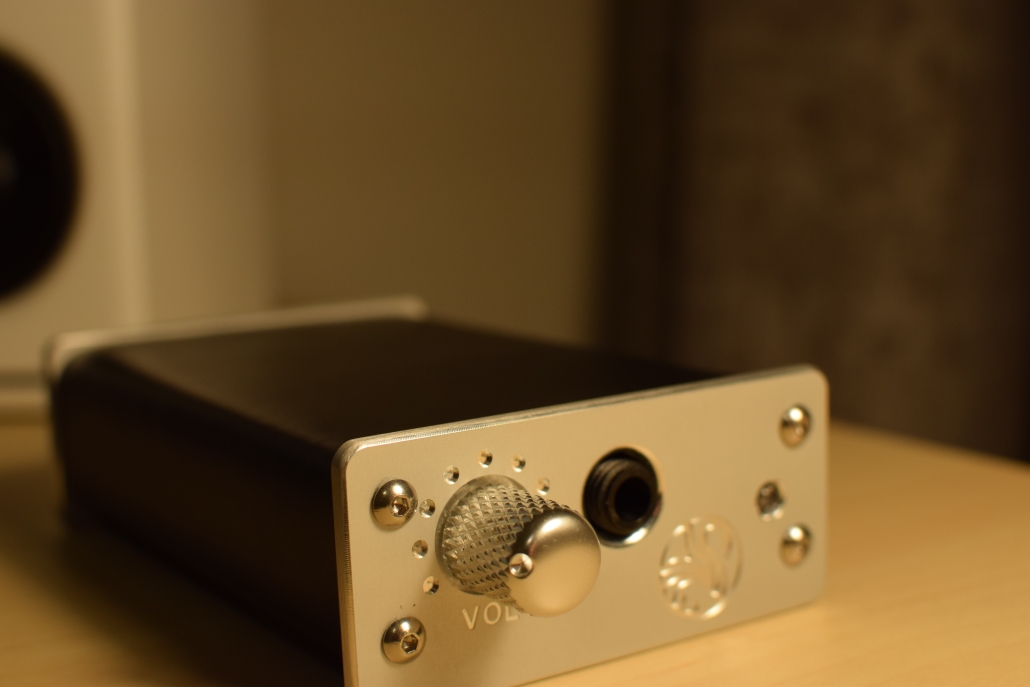 Tony, the founder of Swan Song Audio, and I first met at CanJam NYC 2019 and hit it off immediately discussing engineering design and implementation at the show. He had decades of cross-disciplinary experience in applied electronics with DoD equipment and I have had the occasional tinkering here and there.

I walked away from the booth with one key takeaway from Tony and his design philosophy; trust in the analog and discrete chip manufacturers. His idea, so simple and grounded in engineering, yet so against the grain of most audiophilia these days, astounded with its simplicity and courage going against what most manufacturers think when designing gear. The typical headphone audio company approaches parts selection and designing circuits with a  from the ground up philosophy and often will re-engineer the wheel. They will often work AROUND the chips and try to impart their design choices, circuit layout, and power rectification/amplification thoughts into a completely new beast.

Tony’s most poignant quote to me was that Texas Instruments (Burr-Brown), Analog Devices, Cirrus Logic (Wolfson), ESS Technologies and others employ thousands of engineers with a century’s worth of experience and knowledge; they know exactly what they are doing. Tony is the surgeon, the sculptor that has been imparted a millennia’s worth of knowledge from ancestors past, he utilizes the scalpel and tools learnt. Most companies, on the other hand, are the scalpel and try to fundamentally change the cuts and go their own path. There is nothing inherently wrong with either approach, both are valid design principles, but it is a breath of fresh air to hear a company that starts off their products trusting in the chips and designing WITH them in mind.

Today, I have with me the Swan Song Audio Cygnet USB Headphone & Upsampling DAC available in High (>60 Ohms) or Low impedance (<60 Ohms) variants. These devices are custom built and change model to model depending on customer needs and wants. Tony is extremely responsive and said that a variety of customization options are available including ones that aren’t specifically mentioned; just drop him an email.

The device is about the size of a brick or retail phone box and is Swan Song Audio’s “portable” model. They noted to me that the device was not overly picky and can be powered by a USB power bank, computer USB port (less recommended), or a wall wart/plug which is the most recommended option. I have tried all three and have received good results, nothing overly stood out but the wall wart is still the best option for power stability and cable tidiness.

I found the unit to more so fit the traditional desktop use with the option of transporting it easily. The size of the device is just enough that lugging it out to use in a lobby with your laptop is a bit awkward. Once you get the power situation handled and plug in the USB Type A to USB Type A data connection, you now more cables (often thicker than you would like) in the vicinity. A transportable solution when you are moving around often but want to set up a fantastic listening setup in 1 minute flat and sit there for at least a few hours?… Absolutely. Something you can just whip out and use on your hearts demand is another question.

Another important aspect to point out is the “Upsampling” portion of the name. This device is natively 48KHz and 16-bit out of your computer but then does hardware level upsampling inside the unit. Tony believes this to be the best way of getting maximal audio performance. Paraphrasing a conversation I had with him, Tony noted that ‘96KHz, 24-bit output selection on computers isn’t actually real due to limitations on the chipset level of what USB can offer’. The Swan Song Audio Cygnet 2-stage Headphone amplifier and Upsampling DAC thus being their solution to this by performing all the high quality upsampling using dedicated hardware.

Usability wise, I found the device to be ‘good’ albeit with minor caveats here and there. There’s only so much you can do with a DAC+Amp that is on your desk usability wise. These usually include how well it stays in place or fits, how the buttons/knobs feel and are located, power on/off and general feel. The unit features the power switch in the back of the device and a volume knob, headphone output, and indicator light in the front; it is fairly minimal. Only two things stood out for me and they were the clearance of the volume wheel and the sometimes non-intuitive startup procedure. The volume wheel is extremely close to the headphone output and can often be blocked by the housing of the headphone terminator jack. For the most part, you will need to pinch it from the left side to turn. As for the startup procedures, upon the power being plugged in, a light will illuminate from the rear of the device sometimes fooling new users as to the state of the unit; the trick is to look at the front indicator light and not the rear.

Past that, I found using the Swan Song Audio Cygnet Headphone & Upsampling DAC to be easy and brisk. There was often little need to move/change or modify the device, musical enjoyment took front and center thanks to how easy the device is to position and place on a desk no matter how cluttered.

The Swan Song Audio devices are incredibly customizable with Tony responding at every step to concerns or questions. Upon mentioning the volume knob being close to the headphone jack, he designed a slightly new body to allow customers that want them to be further the ability to have that option.

So let’s start with some gear I used with the Swan Song Audio Cygnet portable DAC Amp while testing. Sitting next to it I had an Objective 2 with Burr Brown OPA2228 with an AK4396 DAC feeding that. Also, I had a Burson Swing DAC with the Sabre ESS9038 which feeds into the Burson Fun with their V6 op-amp upgrades.

Headphones used with the DAC Amp were the Hifiman Sundara, Hifiman Ananda, InEarz Audio Euphoria CIEM with Adele technology, Sennheiser HD 6XX, AKG Q701, and FiiO FH5. For the most part, the Low Impedance model was used for my tests due to it offering the best compatibility. Note that when Swan Song Audio gives you an impedance range, they mean it. The moment I was outside the range supported even a bit, I got noticeable noise such as what happened in using even the FH5 (19 Ohm) with the Low Impedance model.

Now, for the first song of the day, I’d like to introduce “Requiem of Silence” composed by Kenichiro Suehiro and used in the TV-show Re:Zero. It’s a classical piece full of emotion, dread and emptiness. Listening to the opening moments where nothing but clean string instruments are slowly being played with seemingly nothing in the background describes one key strength of the unit which is its background; it seemingly just fades away. No noise, no haze, no nothing, its a dark emptiness out there that just keeps expanding and expanding. It’s the Alaskan wilderness with a seemingly bottomless pit. The stage is given room to really take advantage of its technical limitations without the DAC or amp giving the listener the sense that there is an ‘end’ to it because there isn’t with the Swan Song Audio Cygnet DAC+Amp.

As we get into the fast hitting attack (4:45m+) that comprises the chorus, the unit shows its colors with how sharp it is. The mid-range was incredibly poignant and forward like a katana slicing through a blade of grass. It punches you with energy and teeth to every note and string struck. It’s almost piercing the heavens but just so much without getting shrill or hot to the ears. An equally priced stacked unit like the Burson Swing+Fun (all with V6 upgrades) with its 96/24 option in Windows was unable to match the breathtaking excellence of the midrange on the Swan Song Audio unit. They were much smoother, yes, but at this point in the song, I’m leaning forward in my seat asking for more from the music, screw smoothness, I’m out for tenacity and the Swan Song delivers.

The next song needs no introduction, “Bubbles” by Yosi Horikawa is one of the most demo’d songs out there thanks in part to its technical might. This song is right up our device’s alley thanks in part to its strong performance in background elimination and mid-range emphasis. Details were sharp and pronounced and any miasma that sought to ‘contain’ the song in a box was ejected with force before the track even began; you can’t contain the Swan Song Audio Cygnet portable DAC+Amp, it’s free. Listening to the marbles dropping on surfaces gave for an engaging experience as you seek to hear each individual element that is happening. The unit demolishes this task by bringing you the element that you want on a silver plate to be analyzed in depth.

Let’s end this with modern rap and hip hop in the form of “Homicide” by Logic ft. Eminem. It’s one of the hottest songs out right now and is mastered well while featuring a strong sub-beat, sharp cymbals, and insane lyrics. The Swan Song Audio Cygnet from an audiophile standpoint slays the song. Logic is heard cleanly and with a strong wave of intent and power behind each word. The cymbals have spark to them and their’ snap’ keeps the background on fire. Alas, this here is also what happens when a device is too ‘audiophile’ for the needs of the genre. The song becomes too technically poignant and forward. The voices too cold like marble and lacking in some aspects of human emotion. It’s much too in your face without enough smoothening of some aspects that simply don’t need that level of detail or facial blast. The unit is not universal with everything you throw at it, it’s a double edged sword; its sharpness and detail cut both ways.

Conclusion:
The Swan Song Audio Cygnet USB Headphone & Upsampling DAC is an excellent choice for a fast attacking unit that punches far above what its size may seem to entail. It has minor usability quirks and a tight headphone impedance range but makes up for it with its ease of transportation and deployment. The unit is punchy and is a waterfall of in-your-face action at a moment’s notice, at your desk or in a hotel lobby. We at Guru are definitely keeping an eye on what Tony is putting out next.  In the words of Dua Lipa, “this is not a swan song”, rather it’s just the beginning.