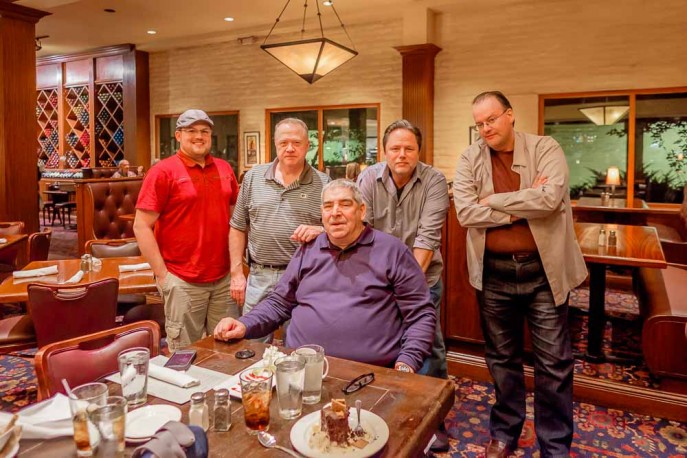 Headphone meets are a great time. A few friends and  tables full of gear. Add some pizza and  the day will vanish while everyone enjoys the technology and the hobby.  CanJam’s is a massive meet with over 1000 people examining  gear from over  70+ passionate inventors and companies from all over the world.  CanJam at RMAF(Denver) goes completely over the top. 7000+ people, 250+ companies from all over the world all taking the Marriott in Denver.  It is an annual visual and auditory treat taking place over three short days  every  October for the last 12 years.

Hosted by the extraordinary Marjorie Baumert, RMAF paired up with Jude Mansilla and CanJam in 2010. This inspired annual collaboration brought together the established two-channel audio community and the burgeoning personal audio world. The result is a wonderful mixing of generations of audio enthusiasts and  different approaches to audio bliss.

Headphone Guru dove into this maelstrom of audio nirvana with four writers and six staff for 2015’s event.  I drew the beginning of the alphabet and Part four  and the conclusion for my Guru coverage.

Abbingdon Music Research from the UK makes the highly acclaimed Ifi series of portable and small desktop audio devices. Their US distribution is done by Avatar Acoustics.  Owner Darren Censullo brought the gear and the passion as he was highlighting the new micro iUSB 3.0 ($399 USD). the  upgrade of the previous model it functioned natively with USB 3.0 and drops the noise floor to an amazing 0.0000001v!.   Also being debuted was the exciting iPurifier 2 ($129USD) with  active USB ReClocking/ReGenerating/ReBalancing of the digital signal. It  is being offered in USB A, B, C and micro versions.  The new micro iDAC2; R2R anyone? AMR’s classic DP-777 DAC has been upgraded to the new SE model and there is  upgrade path being offered for current owners! The Avatar Acoustics table also included the full line of gear they offer from the Retro Series Stereo 50 home system to the very cool iTube micro tube buffer/preamp. They even have a NOS tube component using 5670tubes and triple would capacitors.

Abyss was featuring their incredible Planar Magnetic headphones in two locations. They had a booth in the CanJam pairing the Abyss 1266 headphones with the new upgraded Woo WA5 300b headphone amplifier. Sublime!  They also  had  a private room in the Marriott tower where you were  greeted by a breathtaking system. The Abyss ($5500), a Pair of Woo WA234 mono-block amps ($15,900 a pair) with Takatsuki 300B’s and 274’s ($4000 USD for the tubes!) being fed by a Mytek Manhattan DAC ($5000 USD) and all JPS Labs cables ($TBD).  The setup looked gorgeous and sounded like a dream. In the adjoining space the Abyss was beunf  paired with a host of  capable amps and DAC’s like  the Cavalli Liquid Gold ($3900) which was using  the top of the line  Golden Gate  DAC ($19,000) from Lampizator. The Wells Audio HeadTrip ($7000) the Simaudio Moon Neo 430HAD ($4500) and, The Viva Egoista 845 Tube amp ($10,000) were also being used for amplification.  This was a top of the mountain room!

Ken Ball and the ALO Audio team made the trip from Portland with one of my favorite pieces of headphone kit; The Studio Six SET amplifier ($3900). Perhaps the best HD800 amp on the market, the Studio Six can drive four headphones at once via single ended jacks with no degradation in power or sound quality.  It is also a  tube rollers’ dream amp. Powered via their fantastic Green Line power cables it was a must hear station. They also brought along the new portable Continental Dual Mono DAC/Amp, which uses a pair of NOS 6111 tubes and the Wolfson DAC chipset. ($1495). Ken mentioned they were gearing up for another production run. ALO Audio also produces some incredible interconnect cables and headphone cables all available on their website www.aloaudio.com

Apogee was back with their super cool Groove portable DAC/amp. The unit plugs into your laptop USB to upgrade your sound output from your music files with its constant current amp and ESS DAC. You connect your headphones and away you go. Don and Roger staffed the Apogee booth. I really appreciated their knowledge of sound processing. No surprise with Apogees extensive background in Pro-audio. The Groove ($299 USD) auto senses the impedance of your cans and adjusts to an optimum output setting. A perfect match between DAC/Amp and headphones every time!

I had to pause briefly before sitting down at Astell & Kern. Mountaintop air is thin and prices can be big (I am calling you out AK380!) Several new products adorned the booth. The new AK T8iE in ear monitors made in collaboration with Beyerdynamic  and utilizing the first in ear Tesla technology drivers. Small and extremely well made the T8iE’s had a sweet sound with excellent mid’s and high’s. Next were the new AK versions of the beyerdynamic T1 Gen 2’s. These are a 32-Ohm version for portable use vs. the traditional 600-Ohm, which also received Rev 2 treatment from beyerdynamic. AK has had the closed T5p portable full sized in the lineup. The T1 Gen 2 gives them a new TOTL open headphone to pair with their portables from the $499 AK Jr to the flagship AK380 at $3500. Upstairs they showed the new AK T1 sound bar that incorporates an AK240 as the centerpiece. The woofer sits in the stand for extra bass, midrange and tweeter across the bar. The AK500N Network Audio Player which also rips CD’s and stores your digital library  was shown with all options ($20,000).  The Speakers were Metal Sound from Korea featuring Ceramic drivers.

James Strong from Atomic Floyd, UK brings 15 years of blood sweat and tunes to CanJam. Atomic Floyd is the king of Titanium and Kevlar. James fantastic Super Darts give a wonderful presentation in a compact and very high quality package. Fully iOS device capable the Super Darts come with a full compliment of accessories including a variety of ear tip types and sizes for that perfect fit. I highly recommend a listen!

Jonathan Scull the PR impresario for Audeze said to me “Don’t come over until 11:00AM…..” Such secrecy! What could it be? How about a new flagship headphone, the LCD-4 ($3999) and a new flagship amp appropriately called The King ($3999), designed by noted amplifier designer Bascomb King. This Tube/Solid State hybrid design sounded big wide and detailed when paired with the LCD-4’s. Whew…what an entrance…this must be everything new! But wait! A new version of the EL-8 series called the EL-8 Titanium sporting the new Cypher cable with an iOS Lightning connector rather than a typical 1/8” headphone jack. The cable contains a DAC and Amp to improve the output from the iPhone. I spoke to Sankar Thiagasumudrum, Audeze’s CEO about the new cable. He said he expects Apple approval of the cable shortly and they are working on making the EL-8 Titanium’s available in the Apple Store soon. This will be a grand slam!

Audio Zenith’s booth offered several pairs of their PMx2 Planar Magnetic headphones. What’s with that name, PMx2?  Alex, the creative genius behind Audio Zenith likes to say they are two times the performance of the Oppo PM2 headphones.  He buys his drivers from Oppo and then heavily modifies them. He also crafts his ear pads with different densities of memory foam in different zones along the pad. Incredible detail! And, oh…He makes sure the frequency response is flat, I mean flatter than any other headphone by a wide margin. No 6k hump, no low-end bump. Alex likes things to be neutral like the real world around us. I spent an hour listening to his passion and his pitch. T he headphones sound terrific. ($1200)

Aussie company Audiofly came with headphones, the AF240 ($249.99) and a range of in ear monitors. Eight universal in ear monitors to be exact from the AF33 dynamic driver ($29.99) to the flagship AF180 with Quad BA’s and terrific separation ($549.99).  The booth was staffed by Jenni and Briana with great knowledge and enthusiasm, They also had the most unique and eye catching display placing the IEM’s in a Bass Guitar travel case. It both looked and sounded like music!

AudioQuest had a full team in house to show off their new NightHawk semi open over the ear headphones. (Review forthcoming on https://headphone.guru) as well as samples of their groundbreaking DragonFly USB DAC/Amp, their new JitterBug USB and the Beetle optical Bluetooth desktop DAC. All were available to try using a variety of AudioQuest’s world-class cables. It was quite a show with gear that reached terrific sonic heights and did not break the bank. Well done AudioQuest!

Aurisonics from Nashville, TN had a lively booth in the atrium showcasing their universal and custom IEM’s ranging in price from $349 to $1299. They also had their highly regarded rocket universals ($249). Aurisonics is another company finding great success with Dynamic/Balanced Armature designs. They rightfully focus on their ability to create a great fit. Being based in Nashville they have fitted thousands of ears and supply many professional musicians with their on stage monitors.

Auteur Audio brings Colin Shaw to CanJam for the first time.  The new  prototype design of his new Lilienfeld’s Choir solid-state headphone amp was being shown. Coming in at a cool $6000 this flagship design is his first since creating the Sicphones amp from  his start-up Kickstarter campaign. I bought one of those amps and it has a beautiful sound with higher impedance headphones. The Lilienfeld’s Choir will pair successfully with a much wider range of headphones from 24-600 Ohms. It was great to meet Colin in person and I wish him great success with his latest creation.

My final booth was industry titan beyerdynamic. I had great conversations with both Thomas Halbgewachs, the global head of business development for audio products, who came in from Germany and with Peter Carini, the US National Sales Manager for Consumer Electronics. Both men were excited for the new T1 2nd generation open flagship ($1099) and the DT1770 closed headphone release ($599 with two pair of ear pads, velour and leather and two detachable cables straight and coiled). The T1 2nd generation was released in two versions, the 32 Ohm in connection with Astell & Kern as well as the 600 Ohm replacement for the former T1 flagship. Both headphones featured the highly efficient, precise and low distortion Tesla driver.

There were many industry notables in the house and it was a pleasure to get together with many friends from around the world as we took in the always amazing new designs and approaches that continue to be released in this golden age of personal audio. These are the best of times. Grab something cold to drink and put on some music! And as always stay tuned to https://headphone.guru for the latest in gear and more.