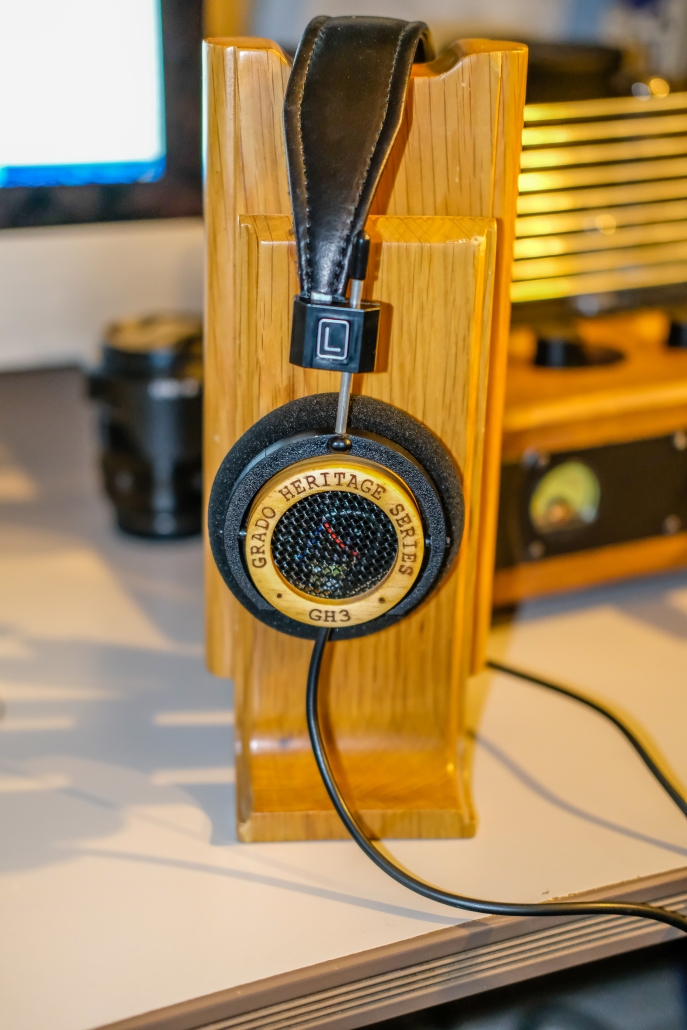 The Grado Heritage Series GH3 open-back headphone is an interesting design from legendary designer John Grado. The open-back small headphone was inspired by the Beatles song “Norwegian Wood” from their “Rubber Soul” album. In 1964 the Beatles came to NY and changed the world with their pop melodies and appearance on the Ed Sullivan Show.  The sold-out concert at Shea Stadium introduced Americans to their music and had all the young teenage girls in a frenzy. The Beatles in many ways changed music and their songs are still well played an enjoyed by millions worldwide.

Meeting John Grado, John Chen and Rich Grado at Skinflints for lunch was a walk back into a time machine. Skinflints back in the day, in the late ’70s, was an ice cream parlor with a bar which also had a notorious reputation at times. The Grateful Dead when playing at Madison Square Garden would go there after their shows and hang out all night. The bar would be closed when they were there and along with the Hells Angels, the place would rock and party all night.

The décor of the establishment remains the same, with the original bar still intact with the old fashioned ceramic tile floors and steel walls. They serve lunch and dinner and still have a bar open for business and they remain a popular Brooklyn pub and restaurant.

John brought two headphones to the meeting. John and his brother Rich began telling me the story of the development of the GH3. While listening to the song “Norwegian Wood”, John Grado had begun to wonder if there was really a wood in Norway called Norwegian Wood. John put his research team to work and discovered the Norwegian Pine wood is very popular in Norway. Grado imported the Pine from Norway and began work on the design matching drivers to the wood for sound quality.  Inspired by the Beatles tune, the birth of the  Norwegian Pine Grado Heritage Series GH3 came to fruition.

The GH3 is priced at $325 and Grado offers an optional hard-shell carrying case as a $34.95 upgrade, making the total package $354.95 (with a $5 discount for buying them together). The Heritage Series dynamic open-back GH3 has a frequency response of 18-24,000 Hz and the impedance is 32 ohms. The drivers are matched and the 99.8db efficiency is easy to drive with portable phones and listening devices. The GH3 includes a 6.5mm Golden adapter allowing for use with either portable devices or desktop headphone amplifiers.

The Norwegian Pine wood was chosen for the outer cup design and is quarter sawn cut and cured. To ensure the sonic integrity of the combination of drivers and wood, the supplied copper cable is not removable and uses a high-quality copper chosen for best musical clarity.

John gave me the GH3 while I was having lunch and once we left the meeting I jumped into the SUV for our two-hour ride home. My daughter Michelle opened the headphone case and wanted to listen to music using her iPad and started streaming Tidal. I was driving and asked her how they sounded and looking over at her I could see she had a big smile on her face. “Dad they sound great.” She loved what she was hearing and told me they felt comfortable and loved them. Once home I decided to warm up my Auris Nirvana EL34 amplifier. I turned on the Marantz SA10 and started streaming from Tidal and cueing up the Beatles song that inspired this design from “Rubber Soul”,  “Norwegian Wood”.

“Rubber Soul” mostly has love songs for the entire album and “Norwegian Wood” was a substantial leap forward for the Beatles and the folk-rock arrangement reflected the inspiration provided by Bob Dylan and the Byrds. The GH3 on this tune was exceptional with its pristine clarity and dynamic presentation. The Beatles were in a soundstage that had air and space between them as they played the song.

“Michelle” from the same album is one of my favorites and bears my daughter’s name. The first time she heard the tune, she memorized the words and knows how to sing the tune by heart. The GH3 reproduced Paul McCartney’s vocal as clear with excellent articulation of the lyrics and the soundstage was defined. Paul’s vocal was centered up front with excellent spacing and air around him. The GH3 was delivering big-time performance and was masterful in retrieving detail making the Beatles come to life.

Listening to “Dark Hollow” from “Reckoning”, the live acoustic album from the Grateful Dead, brought me back to Skinflints where I had lunch with the Grado team in a restaurant that was home to the Grateful Dead (and sometimes the Hells Angels) every time they visited NY. The GH3 brought this album to life with its speed and dynamic sound.  I was continuously impressed with the performance and detail I was hearing that came from the GH3.  The midrange was articulate and bass while not bass head deep, had exceptional texture and was satisfying. I never felt I was missing anything while this album was playing and felt as if I was transported to the venue, it was as if I was attending the show.

“China Doll” has excellent percussion with terrific bass lines and the GH3 dug deep into the track and extracting the percussion flawlessly and the guitar licks were excellent as well, with Papa Bear in the front of the stage. Garcia’s vocal was clear, delicate and articulated. Wow, this was an amazing presentation for any design and sounded fantastic.  I kept thinking what a terrific headphone this is, especially at this price point, and could not believe how exceptional the sound was for so little money. The GH3 had dynamics and speed that made listening to Rock albums fun and believable. The lightweight design was comfortable on my head, so much so, that while listening, all I could do was concentrate on was the music and the performance of the Dead. The GH3 captured the sound with exceptional musicality.

Hilary Hahn’s new album “Garcia Abril: 6 Partitas” is an excellent performance of Hahn’s violin and listening to “Partitas 6” showcases her talent.  The tonality and inner body detail of the instrument were vivid and glowing with transparency. The music was flowing and, never being distracted, I continued to be impressed with the performance and musicality of the GH3. The musicianship of Hahn was sensational and once again the GH3 did not disappoint with its dynamic range and exceptional midrange and treble extension.

Vampire Weekend’s new album streaming on Qobuz showcased the band. The dynamic sound of the GH3 came alive while playing “Holding Now”. The vocal production on this tune was vivid with excellent clarity. The arrangement of the background singers was articulated and the sound the GH3 produced was pure magic with soundstage definition. The bass lines were noticeable and while not slamming bass, it was still satisfying and believable on this excellent tune.

The rockabilly sound of the late JJ Cale on “Stay Around”, a 15 track set of unreleased recordings of his songs, has some good tunes and the GH3 was able to make JJ come back to life playing “Lights Down Low”. The sound had his country rock flair and the tune was an enjoyable listen on the GH3 with excellent articulation and the sound once again was exceptional.

Listening to Grado designed products for 40 years now I continue to be impressed with their innovative designs. The GH3’s comfort level made long listening sessions easy on the head and the lightweight design was so comfortable during long marathon listening sessions. While listening for long hours, I never once felt the need to remove the GH3 or got tired of listening. The long nights went into early morning hours and the GH3 had me captivated with its masterful performance and musicality.

Vocal recordings were always alive and listening to rock music brought me back in time to when those bands were rocking my teenage years. Listening to “Norwegian Wood” brought back memories of 1964 when the Beatles visited NY and were on the Ed Sullivan show and I was 9 years old and became part of my musical journey that has been my lifelong passion.

“Reckoning” brought me back to my neighborhood and it was as if I was in a time machine while listening. I remembered the times me and my brother, in our late teens, hung out there at Skinflints, long after the Dead stopped going there, and it was a fun bar to hang around, filled with nostalgia and terrific memories from our teenage years. Capturing moments from years gone by is always special and the Grado sound hasn’t diminished. With the GH3 I was able to forget about the gear and just get into the music.

The lightweight design with the optional carrying case makes this a terrific headphone for travel. The GH3 is sensational playing with any portable device without amplification. Phones, tablets and digital players all sounded exceptional with the GH3. The GH3 has a terrific midrange with excellent textured bass. The pristine treble makes violin and acoustic instruments shimmering without any trace of harshness or irritating sound.

The soundstage was always wide, deep and delivered a layered performance of large scale recordings with speed making them come alive. Classical and large scale recordings were always exceptional while listening to the GH3, with its expansive soundstage and fast dynamic presentation. Tympani whacks and finales are always exciting and the GH3 with its fast drivers never disappointed, recreating the finales and delivering a masterful presentation.

Rock lovers will enjoy the dynamic sound of the GH3  with its lightning fast driver which has the speed to make instruments come to life. Drum solos had excellent slam and made the music exciting to listen to and always kept my body moving. Tonality of instruments for me is important in reference transducers and the ability of the GH3 to recreate the tone of instruments was exceptional.

Grado continues with their rich history of offering outstanding value and musicality in their designs.  John Grado’s Norwegian Pine Heritage Series GH3 is a limited edition that cost $355 with its portable hard case making this a sure bet for anyone who looking for that one portable headphone that will let you forget about everything but the music.  If you’re looking for a small headphone that can deliver big sound regardless of genre, the GH3 merits your consideration and gets our highest recommendation. Sensational!