HIFIMAN’s HE1000 Part 3 of 3: Listening Impressions 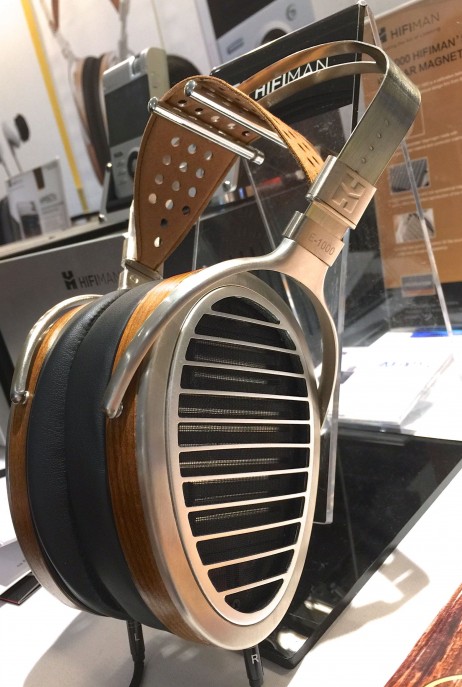 When I attended the CES in January 2015, and while at the Convention Center in the South Hall, I visited the HIFIMAN booth and listened to an early prototype of the HE1000, and realized then that Fang may be on to something really special with his new design. The day I spent at the Venetian confirmed my suspicions. The thought of any new HIFIMAN design is always special and generates excitement, and more often than not, anxiety in the personal audio community at Headfi.org.

The design of the HE1000 was different, and some may even say a little radical from past designs from HIFIMAN’s bag of goodies. The HE1000 was using Nanograde, a new material that was lighter and thinner than anything currently produced. The asymmetrical magnetic circuit took 7 years of research and development before it was ready for production. The soundstage was wider and had more front to back depth than previous HIFIMAN designs. The sound of instruments appeared to float in space, and had air and separation that was better than any other headphone I had previously heard. The music was not only floating, but also appeared as if the music was being performed live and the headphone had no compromises in reproducing music.

Leaving CES, Fang asked me if I could come up to New York to the Trump Soho where he was inviting Headfi.org members to come to his hotel room for a more extended listening session. After leaving that session, and spending the entire day with Fang Bian and Peter Hoagland, little did I know that day would be a day that a new love affair was out about to begin, and change the way I listened with headphones.

Fang Bian made me understand that he was on a mission with the HE1000. It became clear to me that day that he would not accept anything less than building and constructing the best-designed headphone in the world. The HE1000 may be destined for greatness and the early feedback from the personal audio community has been positive and exciting.

Fang asked me to pick up the prototype from Stereo Exchange and keep it for a month, adding HIFIMAN’s EF1000 headphone amplifier to the mix, and write previews for Headfi.org and Headphone Guru. I gladly accepted the opportunity and was excited to spend a month with the new dynamic duo. I wrote a glowing preview in which I concluded that the HE1000 was an extraordinary design, and Fang’s greatest achievement and that he was able to build a product that would redefine what headphone listening was capable of achieving, with his magnificent modern design.

The HE1000 was able to convey the emotion and dynamics of a live performance. It was better than any headphone currently in my arsenal. It draws me into the music and keeps me focused and captivates me for hours on end. All I keep thinking about is how magical it  is in reproducing all types of music.

Once the production pair arrived, I opened them with the excitement of a little kid in a toy store, and have been listening to them non-stop since they arrived, while only changing them to make comparisons with other flagship headphones. The HE1000 soundstage is special. The musicians were floating in space with air and separation, with pinpoint imaging. Focus was so good, it appeared as if the musicians were now in the listening room.

The production model had minor cosmetic changes. The grill instead of running up and down was running side to side which made the headphone more attractive. The headband was smaller and easier to fit on my head. Tighter tolerances in the sliders made it easier to get a better seal over the ear. The HE1000 oval ear cups are bigger in diameter than most other designs. The pads being used, are similar to the ones currently used with the HE560, and offer the same combination of leather and velour. The headphone feels so much more comfortable for marathon sessions than prior configurations.

The ability of the transducer to get the tonality of an instrument right, is a big challenge for any product, but the HE1000 is able to nail the tone of a violin, and the littlest details are easily noticed while listening. Rare for most planar designs is the ability to completely get out of the way and disappear.

The HE1000 has the ability to create a complete 3D sound field. The imaging is the best of any headphone I have ever heard. Listening to classical recordings with my eyes closed, I can easily identify every section of the orchestra. The HE1000 is lighting fast with speed. It is able to reproduce dynamic passages and crescendos with ease. The crushing speed allows the finales to be explosive. The speed of this headphone is really special. The bass is extended and detailed without being overbearing or tipped. Treble extension has shimmer, and is never sloppy or splashy, making cymbals always sound lifelike.

Female recording artists like Melody Gardot or Joy Williams, captivate me. They are spellbinding and seductive. I always felt as if they were performing for me while I was listening with the HE1000. With boundaries removed, there was nothing artificial in the performance. The sound is totally independent of the headphone and music in the soundstage has more air and space than in any other headphone in my collection.

The 3D imaging is focused and always gives me the illusion of a live performance. With my eyes closed, I can hear inner detail and visualize the performers in their own space, making it more believable when comparing to live performances. The sound is always out of my head with the HE1000 vanishing.There have been many times while listening, that I had thought there was someone in my listening room. I have pulled the headphone off my head more than once and became startled at times thinking there were people in the room; only to find out there was no one there but the HE1000 and my music. The performance was so good at 3D imaging that it was as if I was watching a 3D movie.

Back in 2010 before Fang was moving back to China, he was at my house with his lovely wife, and we were talking about the HE6. The HE6 was one of the best sounding headphones on the planet, but was difficult to drive and nearly impossible for headphone amps to get the best performance from them. As good as they were, you still needed powerful amplification to get them to sound good.

The HE1000 rewards the listener with the ability to use low powered amplification. The Chord Hugo was able to drive them easily. The Cavalli Liquid Gold brought them to a higher level, and the Goldmund Telos showcased what they were capable of doing. The Burson Virtuoso was also a good combination for listening and musicality. The HE1000 responds well, and will scale up considerably using better DACs and amplifiers, and you can also use less expensive solutions to get you your dose of audio nirvana. The HE1000, in my opinion, is better than any other design that Fang Bian has created, and he is closer to his ultimate goal of creating the best headphone on the planet.

The HE1000 is a phenomenal transducer and it captivates listeners with its immense 3D soundstage. It digs deep into recordings and lets every nuance and small detail come to life, without ever being analytical or non-musical. The musicality is the best I have heard. I never felt anything in the recording was missing. The HE1000, in my opinion will achieve legendary status. The $3000 retail price while not inexpensive, offers non-compromised performance, and easily outdistances more expensive designs in musicality and performance.  The HE1000 gives me everything I desire in a reference headphone and is a product that always delivers the highest level of performance The HE1000 has earned our prestigious Headphone.Guru Writers Award for 2015. Highly Recommended!