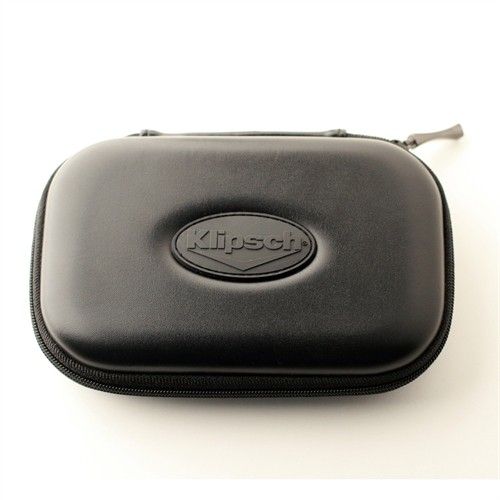 One of the pioneers of American audio, Paul W. Klipsch, developed the first Klipschorn in 1946. A member of the Engineer and Science and American Audio Society’s Halls of Fame, he was a true legend in audio. I was thrilled when Frank Iacone asked me to review Klipsch’s X6i and X12i in-ear headphones. They reside in the middle of Klipsch’s headphone offerings, at $179.00 and $349.00 respectively. Utilizing balanced armature technology both the X6i and X12i offer a smooth, well-balanced sound, and are equipped with totally non-mircophonic detachable cables.

The X6i’s single balanced armature driver provides a remarkably balanced presentation that my youngest daughter enthusiastically endorses.  With a hearty, “Hey Dad these are even better than my Apple Ear Buds”. Coming from this budding audiophile this is no feint praise, in her 15 years she has never heard anything better than
the Apples, this my friends is a breakthrough though my music remains “sucky.”

The X12i is a rather small in-ear monitor, housed in a milled aluminum housing, extremely light and comfortable, yet it provides bass heft that is remarkable. This bantamweight monitor comes supplied with Klipsch’s patented super slim, “Oval Comfort Ear Tips” though this comfort proved to be an odd issue. Try as I might I couldn’t get a good seal, a critical sonic factor in getting great sound from in ears, and they kept falling out. I turned to an old standby the Comply T100 Isolation Foam Tips, problem solved (more on this below).

As stated in my introductory review for the Headphone.Guru last month on the Beyerdynamic DT-1770 Pro headphones, I am a music lover first and audiophile second. I know there are those among you who love nothing more than another soulful ballad from “fill in the blank,” on “Snobojacket Recordings” (you know who you are), but if the music doesn’t move me, my mind moves on to reported benefits of using a soft bristled toothbrush. You say, Kevin; he who lives in glass houses shouldn’t throw stones (this reviews token cliché). Why, you listen to Wagner recording from the 1930’s (my apologies to those who thought I was going to drop the name of this month’s hot band, I am the antithesis of cool, just ask my daughter, she’ll set you straight).

Klipsch’s X6i offers a balanced, smooth presentation with solid bass and reasonably extended treble. While not the last word in clarity, this is more through omission of information rather than the addition of any sonic irregularities. Clarity is on par with balanced armatures that I have heard in this price range that I have listened to recently, becoming apparent when compared to my reference Alclair RSM Quads (the HD800s of CIEMs) or Klipsch’s own higher priced offerings.Soundstage is good but is clearly bested by the X12i and the Alclairs. They are definitely don’t have an upfront presentation placing the listener several rows behind the RSM Quads. Imaging is a bit curtailed by the X6i’s limited clarity lacking specificity particularly to the rear of the stage.

The X12i is clearly step-up and, in my opinion, an absolute bargain when one considers price/performance ratio. While it falls just slightly behind the Alclair RSM Quads in technicalities, there were several of my comparative tracks where I preferred it to my reference. Like its less expensive brethren, the X12i places you several rows back from the RSM Quads from the musical performance. Where it separates itself from the X6i is on clarity, richness of tone, soundstage, imaging,

When I opened the X12i’s packaging, having not seen one before, my first thought was, “how is something this small going to play real music”? This prejudice was “confirmed” when I placed them in my ears and plugged them into my iPhone 6 Plus. A warm, bland sound, with just a bit of tizzy sound coming from the treble, and much to my chagrin they repeatedly fell out of my ears. Yes, I have ginormous ear canals, though you know what they say about ginormous ear canals, well nothing really but feel free to insert the first positive attribute that popped into your mind.

I thought this just couldn’t be right; Friends swear they love these little guys, no bass and muddy. After a bit of careful thought, puzzlement and deliberation (I am a little slower than your average audio reviewer), it occurred to me that they just weren’t sealing properly (well duh, as my daughter says after much of what I say or do). So I reached deeply into one of my many audiophile drawers, rummaged around till I fond some Comply Comfort Foam Tips. Ah, now that was more like it.

Immediately the bass improved dramatically; clarity was greatly improved and with it sound stage and imaging. This was now the great sounding in-ear that my Friends loved. A comparison that may strike a chord with many of you is they became the LCD-3 to my Alclair RSM Quad’s HD800. Musical, rich, slightly rolled off treble, smaller yet still splendid sound stage, and relaxed.

And Now for a Brief Musical Interlude…

I’ll be honest, I know many of you will use the Klipsch Headphones with your iPhones, Droids, iPods, or various devices, two things prevented me from extensive testing in this manner. First, my unfortunate and negative experience upon first listen, second, the arrival of Cavalli’s great Liquid Carbon Amp. Arly’s Review was spot on, what a marvelous device this is, yes I know it won’t fit into your breast pocket, it needs to be plugged into an outlet, but damn it sounds incredible. Plus, rumor has it Dr. Cavalli is working on a solution to this quandary.

So, first up, musical selections utilizing either my iPhone or iPad Air 2 as sources, a powered USB bridge, iFi Nano iDSD (DAC only) and the aforementioned Liquid Carbon. Don’t know about you, but I love Alice in Chains, Unplugged Album, great sonics and its interesting music (unlike Snobojacket’s latest gazillion DSD recording).The X12i the bass was deep, articulate, and clearly present, shockingly so for such a wee, little fellow. A smooth operator, beautifully rich, downright suave (“suavvvaaaa” here in Kentucky), excellent width and good depth. The Alclair RSM laid the presentation bare, every squeak of a finger on a string, you can hear members of the audience breathing (not really, but didn’t that sound intriguing), the very definition of clarity and precision. Here the X6i’s reduced lucidity did not serve the music.

One of my favorite jazz recordings of all time and in my belief Lou Donaldson’s finest is Blues Walk. On “Play Ray”, Ray Baretto “plays” a seriously mean bongo drum (don’t judge me) and the interplay with Lou’s sax is sublime. On this track, the reduced depth and clarity of the X6i make the stage crowded, the RSM adds significant depth and width, but the X12i has soul. With this particular Track, the warmer presentation of the Klipsch makes it my favorite of the three.

Going in a completely different musical direction, next up is Infected Mushroom’s “Drum n Rassa” off of their Army of Mushrooms CD. Here the Alclair RSM Quads accurate staging takes the prize. The X12i’s  isn’t far behind, though the offering is very different, a velveteen, musical somewhat syrupy view of the recording. Close on it’s heals is the X6i, also quite musical and unencumbered by the reduced clarity.

OK, now that I have surrendered myself completely to the charms of Cavalli’s Liquid Carbon, what more can I do to wring the last little bit of performance out of these little gems. You guessed it MOAR power, obscene amounts of it, first Auralic’s Taurus Mk. 2 Amp, followed by an unexpected arrival that packs an even bigger wallop. The Taurus provides 4.5 watts of pure class A sonic bliss at 120 ohms; God only knows what it is pumping into 50-ohm (or 32 of the RSM Quads) load of the Klipsch In-Ears.

So what better to initiate this “challenge” with, how about a classical “War Horse”. The Reiner Recording of Strauss’s “Also Sprach Zarathustra” was just the ticket. Let’s see if these little fellows can handle the opening organ, ha! Well they both did quite well, though the X6i doesn’t scale as well as its more expensive brother, as is to be expected, and the X12i doesn’t keep up with the much more expensive Alclair on classical music but gives it a great shot.

So what could I follow the Auralic Taurus Mk. 2 torture test with, how about another powerful solid state amp? The unexpected, but the highly fortuitous arrival of Airist Audio’s new Herron 5 Amps (review pending). From their generous Head-Fi loaner program, but what track to choose. How about a song that captures what these In-Ear Headphones must be thinking (not really, headphones don’t think, at least, that’s what the voices told me), “There’s No Way Outa Here” off of David Gilmore’s 1976 self-titled album.

Here the Alclair RSM’s greater clarity provided a superior picture into David Gilmore’s dark tune. Though both of the Klipsch In-Ears acquitted themselves quite well, with their more ominous presentations suiting the brooding music. One area where both of the Klipsch Headphones bested the Alclair was in bass quantity and reach. The soundstage on the X12i was exceptional, one of the best I have heard coming  from an in-ear monitorIn closing, the Klipsch X6i and X12i are excellent headphones, both offering exceptional performance and value in their respective price ranges. Rich tone, non-fatiguing, great bass and very musical are perfect adjectives, guess size doesn’t matter. Now to see if I can pry the X6i Monitors away from my daughter.