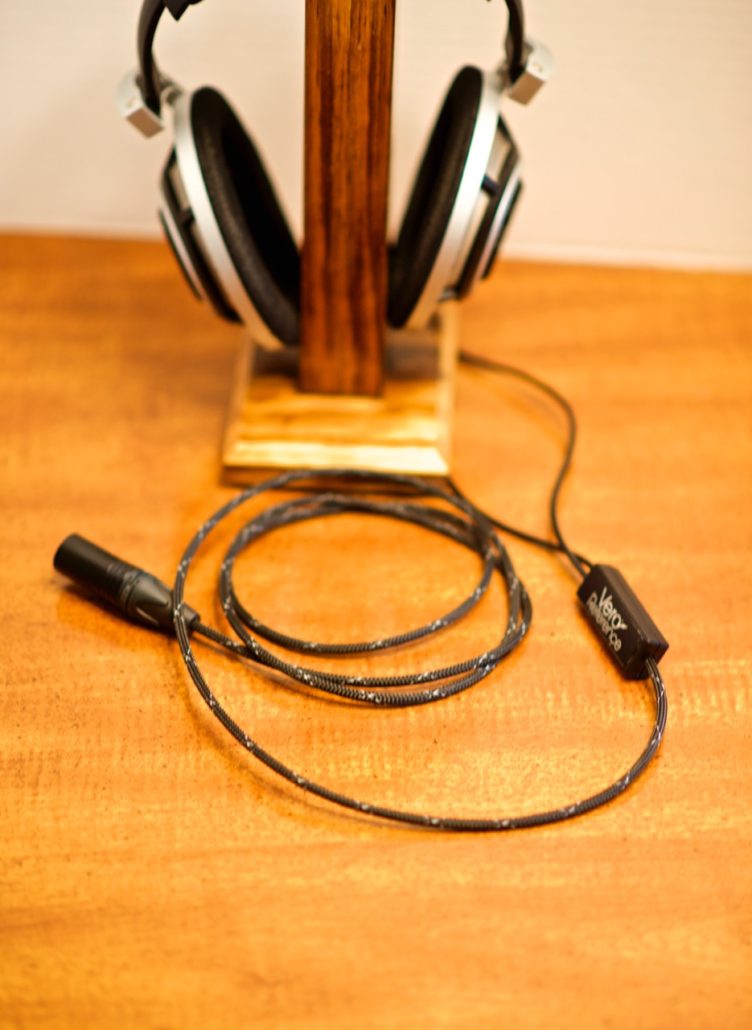 The Vero cables are designed around a new pole technology Bruce Brisson created to address differences in phase and timing while also  increasing articulation in the performance of your favorite headphones. The models being offered are the 12 pole $499 Vero cable and the $899 Reference Vero. Both are available for many leading brands of headphones with the choice choice of either a single ended or XLR balanced connectors.

In addition to the two cables, Bruce also designed a bass dongle.Something quite unique with it’s ability to be connected and adopted on headphones. It can be used either with or without the Vero cables. The Dongle can be attached to any headphone with your existing cables or will work with the Vero cables. The Dongle increases bass definition and smooth’s out the response. The Dongle module is being offered on the crowd funding Indiegogo campaign for $149.99 (50 percent discount from the retail price). The cables also have up to a 50 percent discount if ordered during the crowd-funding campaign.

MIT Cables patented Multipole™ Technology, according to MIT, increases the articulation across the frequency spectrum. The mid-range is smoother in presentation and the signal passes with a flatter response than a traditional cable.

The Standard Vero 12 pole cable listening with the LCD X and the HD800 sounded articulate and brought both headphones to life. The performances was clearer and more musical than they were using the stock cables that came with either headphone. While listening I noticed no noticeable coloration with either model. The Vero cables just disappeared with the music. The Vero made the upper frequencies clearer and while listening to different types of music. As Bruce claimed it would be, using the Vero with the Sennheiser’s HD800 the treble was more articulate.

Good classical recordings had more air and space between instruments while layering between the different sections of the orchestra became more focused within the sound stage. Stepping up to the HD800 using the 21pole Vero Reference brought on subtle, but noticeable, improvements. Particularly in the upper frequencies. I could hear more focused sound staging with better imaging while listening to “The Nutcracker” on London Records. I also noticed the higher registers were more vivid while you could hear each individual section with more clarity. I could detect the individual sections of the orchestra with better layering and separation.

The bass dongle is interesting. Plugging the module to the end of the HD800 cable produced a smoother bass line. The sound and staging became more focused. I could hear subtle, but noticeable, differences and the imaging leaped another notch and the music also was more transparent. With my eyes closed, the performers were more out of my head. Using the Vero Reference cable (while differences were delicate) the performance overall was better than the standard Vero. The distinctions between cables were mostly in additional clarity and better instrument separation on recordings. The cable had no identifiable sound signature while the music just sounded alive and always involving. I would notice more differences in recordings, such as a gentle brush strokes on a cymbal in a good jazz recording.

The LCD X and XC benefited using the Vero over supplied stock cables. There was major improvement in clarity and transparency. The grain disappeared and the performance was more defined and had better imaging than the stock cable. I could hear deeper into recordings with better definition and transparency. The soundstage was more defined and the layering the different sections within the orchestra was easier to identify. Piano recordings had more decay and the treble had better extension and was never hash or irritating. The Vero was extracting the best that the headphones had to offer.

The cables had no identifiable sound of its own. The music was just presented with better definition and a cleaner window. The switching of cables with either headphone was like cleaning a dirty window. It was as if I had used Windex to clean off the grunge and grime and the window had more clarity. The music was cleaner and clearer. The music had a more alive feeling to it when using the Vero cables. I became consumed with the performances and forgot about the gear being used and lost myself in the music.

The MIT Dongle gave the bass a smoother presentation (not necessarily deeper) and sounded more refined when used with the LCD X, XC and HD800. The bass, as good as it is on both headphones, became better while using the dongle. The bass was not only smoother but also had more definition. I could hear better imaging with the bass module than without it in the system  while having me more consumed within the music.

The MIT reference cables used on all three headphones were a significant step up over stock cables. The new technology is interesting and delivered terrific performance. Good reference cables in my experience just get out of the way and do not add or subtract what is on a recording. I never felt as if I was cheated or missing anything in the musical performance. The MIT Vero cables made all my reference headphones sound better.

If you own high quality reference headphones you should check out this new technology from a well-established company that has a reputation for pushing performance to higher levels. When investing substantial money into reference headphones you want to get the best performance you can without any distractions. MIT Vero lineup removed all the obstacles associated with poorly designed cables and will let you get better performance from reference headphones. The bass dongle is also worth purchasing as they can be used with any headphone and is offered single ended or XLR balanced. Folks, the campaign is coming to a close soon so check them out quickly to get the discounts that MIT is Vero Revolutionary Headphone Cable | Indiegogo