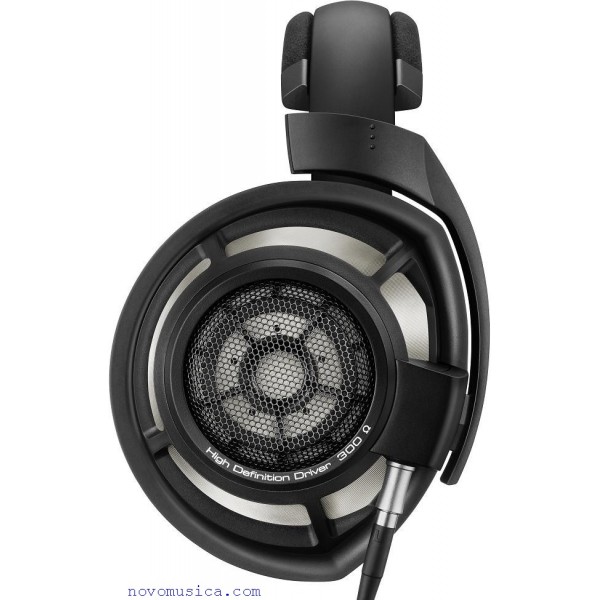 Sennheiser has been building high quality headphones since 1945 when Dr. Fritz Sennheiser founded the company. The manufacturing facilities are located in Germany, Ireland and the United States. The company employs 2750 people worldwide and is a leader in headphone production and technological advancements of personal and pro audio globally. Prior to 2009 there were few flagship headphones available for the audio enthusiast. The Sennheiser HD800 which arrived in 2009 and received with great enthusiasm in the community. The 56 mm sound transducer is one of the largest drivers of any dynamic headphone currently available. The HD800 had a $1499 retail price when introduced  and  stellar sales worldwide made it one of the best selling flagship headphones worldwide.

The reviews in the press and community forums were mostly positive. As a reviewer it became one of my go-to headphones because of its analytical and detailed sound signature. Many users complained that there was a spike in the upper frequencies of the headphone that was attributed to a boosted treble at around 6 kHz, while others complained it was a tad light in bass reproduction. Others went on saying it had to be amplified correctly and responded best with tube amplifiers and some went as far as saying the upper treble spike was caused by the supplied cable by Senneheiser. As is common in the personal audio community, debates and arguments arose as many felt it was the King of the Hill and others felt it was far from perfect.

Despite all the controversy surrounding the HD800 many enthusiasts in the community started to tinker and modify the headphone with modifications and despite everything it still remained popular with reviewers as well music lovers who craved a wide soundstage that no other headphone had until the HiFiman HE 1000 arrived on the scene. The HE 1000 a planar design was able to achieve a wide and deep soundstage and create an out of the head experience at a much higher price point. The price of admission was $3000 to get the soundstage that many felt was equal to or better than the HD800. While many thought Sennheiser was not listening to the community, they would soon find out that quietly they had been working on modifications that would ultimately cure the bright and unforgiving treble and give the headphones more kick in the bass.

The work they had done with the Sennheiser IE 800 pioneered a new innovative absorbent technology. Sennheiser claims the technology preserves the audibility of the high frequency sounds by eliminating the masking effect. Human hearing struggles to hear frequencies of sound when both lower and high frequencies occur at the same time. The success of the IE 800 using the new technology led them to work on the HD800 and implement what they learned while working with the IE800. The additional changes made to the HD800S were in the bass output below 150 HZ and 3 db less mid treble output between 5.6 and 7.1 kHz with 1 dB less in the upper treble.

The technical information and changes the company made are all listed in the manual included with the HD800S. The sharper black outer shell coloring is also a welcomed addition over the prior gray coloring of the HD800 and also differentiates the two headphones with the former model being still in production. The HD800 also had paint chipping issues, which the company claimed was from normal usage, and not covered under warranty. Hopefully the newly designed black paint will eliminate those nagging issues. The only change made to the cable was that it now had a black plug and everything else remained the same with no changes made to other materials. The HD800S comes with two cables, one balanced and a single ended cable, so many users who use balanced amplifiers can easily swap the cable as needed. The $1699 price is higher than the HD800 but adds an additional cable included in the package price.

After my normal 100-hour burn in process I jumped into familiar recordings to get a quick feel of the sound . Using the stock cable that came supplied with the HD800S and balanced into the Cavalli Liquid Gold Reference amplifier immediately noticeable was the treble nastiness that could be heard in the upper register that was apparent while using the HD800 was now gone. Was it more forgiving? Unsure at this point, my listening sessions continued over the next several months. Over that period of time, the HD800S became my go to headphone for critical listening and music enjoyment. Differences became more apparent . Noticeable was less of a bright sound signature coming from the treble and there was increased bass extension. While many the differences at first appeared to be subtle, over time I realized that the improvements were substantial and the sound coming from the HD800S was a major improvement over the HD800.

Patricia Barbers “Companion’ has some great tracks for testing bass and treble extension. Michael Arnopol’s acoustic bass on “Use Me” came to life and has terrific inner detail with excellent extension. Patricia Barber’s vocal on many headphones can sound sibilant, but the HD800S has no sign of any sibilance reproducing her vocal. The HD800S had terrific bass extension and the soundstage was wide without sacrificing any width or depth in comparison to the HD800. Barber’s Hammond Organ was missing any harshness in the upper treble. It had all the detail of the instrument but was never strident and never called attention to anything but the music. The tonality of the instrument was exceptional. The Cavalli Liquid Gold gave a clear picture into the soundstage and let me hear everything that the HD800S was producing in a musical and engaging performance.

Switching the cable to the single ended included cable  and switching the amplifier duties over to the VPI 229D tube integrated was more of a revelation. The sound was as liquid but had the magical tube sound. The HD800S rewarded me with a better sense of tonality and more expansive soundstage with increased transparency while using the VPI 229D. The tube sound was magical and the HD800S was able to step up and identify difference in sound and the ability to portray dimensional spaciousness. The 3D soundstage was wall to wall, and the sound of the treble extension was never harsh and always clean, clear and musical.

Electronic Music lovers will appreciate the clarity and transparency the HD800S is able to recreate. The Triad the newest album from Pantha Du Price has some head banging tracks. “You want Euphoria” has excellent deep bass and excellent treble extension. The HD800S did not disappoint nor did it ever falter while playing this excellent album. The music was clean, fast and not only transparent but had wonderful 3D dimensional quality to it. The performance by the artist was outstanding and I was enamored with the music. It had my toes tapping and head shaking. The bass was coming through with impact and had excellent texture. The treble extension never sounded bright. After the track finished all that I could say was WOW. The performance and recording was exceptionally reproduced.

Listening to LA artist Brett Dennen’s album “Por Favor,” the track “Cassidy” highlights Dennen’s unique songwriting and vocals. The sound coming from Dennen was transparent and the sound was alive and gave me the “you are there feeling” while listening. The soundstage was as good as I have heard in any headphone and still one of the best in production today. The vocals were pristine and musicality was in the top tier. Swapping out the stock with the Nordost Blue Heaven cable gave a clearer picture and added a little more transparency. The differences were subtle but noticeable. I prefer using the Blue Heaven because it has a shorter 2-meter cable and the jacket is tangle free. The improvement finished off the headphone and remains the one I use now in all my listening sessions.

The modifications that Sennheiser developed for the HD800S corrected the issues many users and critics had with the original design. Missing is the bright treble and there are now major improvements in  bass extension. The HD800S performance after months of listening has proved to be exceptional. The transducer is capable of producing the highest transparency and letting the listener hear everything in recordings with musicality. The imaging and staging between performers remains and still continues to be among the best of any headphone currently in production.

The 3D presentations are an exciting listening experience. Vocalists come to life without any sibilance. Whether you listening to a male or female vocalist the HD800S always deliver the lyrics with clarity, definition and transparency. The midrange is as good as ever and bass impact has better extension with slam and texture. Whether I was using the VPI 229D tube amplifier single ended or the Liquid Gold balanced, the results were similar and both amplifiers had terrific synergy and always made the HD800S sound musical. The fit on the HD800S is also one of the most comfortable headphones manufactured. The light weight and slightly tilted drivers feel comfortable for long listening sessions and never feel uncomfortable, nor cumbersome.

Sennheiser continues to push the boundaries of the original design they created with the revised HD800S. The newer model has fixed the minor problems that were apparent in the original design with a product that is more musical with better bass and a pristine treble. The HD800S is one of the best dynamic headphones in the world and its soundstage together with its 3D soundstage set it apart from lesser models. The HD800S sounds as good as many other headphones costing much more money and continues to excite me with its stellar transparency and detail retrieval.The HD800S is a world-class headphone deserving of the best sources and equipment. Sennheiser should be commended for making the improvements and delivering a completed masterpiece. Refined and magical, the HD800S always delivers exceptional performance with superior musicality and continues to make me smile. Highly Recommended

Equipment Used during the review process:

What’s in the box: