The Aroma Audio A10 Portable Headphone Amplifier – Power to Spare 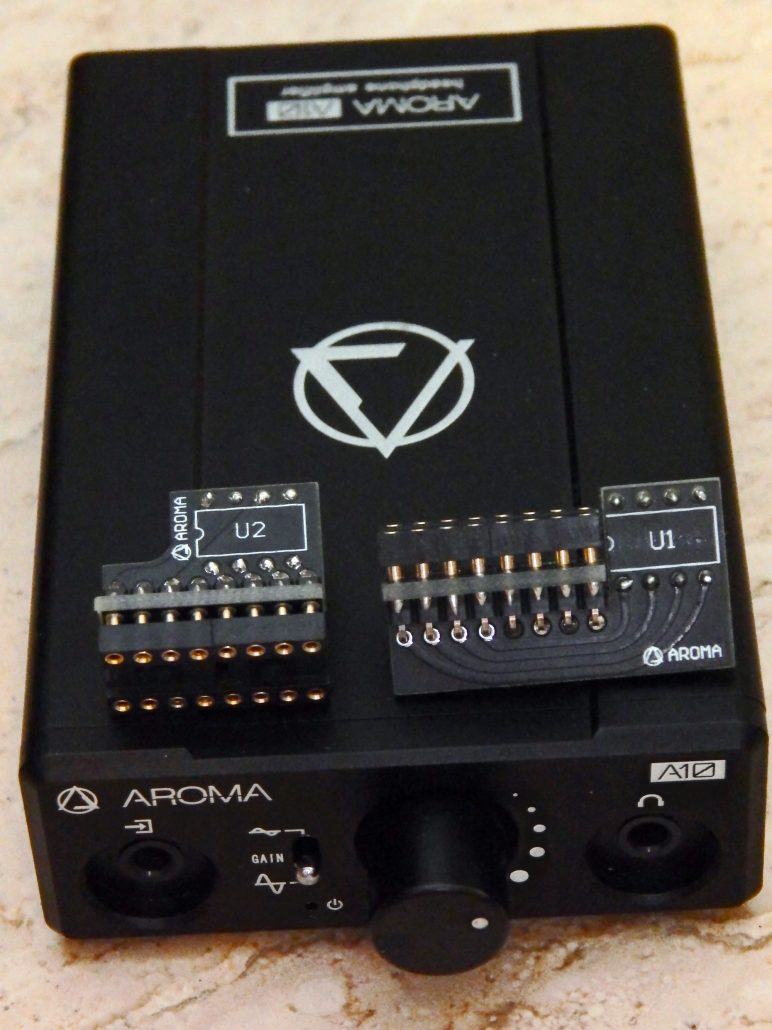 Aroma Audio is another new High-End Personal Audio manufacture to hit the scene lately, with a new approach to the age old problem of high quality sound from portable devices. They were introduced to me by my friends at Moon Audio who sent me a sample of their A10 Portable Headphone Amplifier along with a pair of Aroma Audio Witch Girl S and Witch Girl Pro IEMs (which will be explored further in a future review).

Headphone Amplifiers are the core of what drove the recent rise of the Personal Audio community. Headphones have been around for over 100 years, but until the last decade or so were not really taken seriously by the consumer audio enthusiast, especially the audiophile community, and therefore the dedicated Headphone Amplifier was a rare thing. Now there is a growing industry providing a large range of Headphone Amplifiers, and of specific importance to many is the Portable Headphone Amplifier. Most smartphones and many DAPs don’t have the ability to drive most headphones, and some prefer the colorization of their specific portable amplifier over the unmodified sound produced by their chosen source. That being said, Aroma Audio seems to take the more purist approach to the sonic signature of their amplifier, that the purpose of an amplifier is to provide greater power, not act as a signal processor.

Though unique in execution, their design is rather old school in that it recognizes that the power supply is the most important part of an amplifier and takes several steps to improve it. While the battery of a portable amplifier has a great advantage over the mains voltage of a desktop unit in that it is pure DC and therefore doesn’t produce noise that needs to be suppressed, it is limited in voltage (usually 3.7V, 9V, or 12V). Aroma overcomes this limitation by using a 400 kHz oscillator to allow them to boost the voltage to a whopping ±15V (giving them a full 30V swing). Oscillating at 400 kHz rather than the more common 50 Hz or 60 Hz frequencies means that it is unlikely that the AC noise will be perceptible in the audio stream, and to further insure this, Aroma uses humongous filter capacitors (almost as large as the amplifier itself). The higher voltage allows Aroma to eschew floating ground designs thus increasing shielding and noise rejection. Finally, Aroma employs an unusual hybrid amplifier design using two dual op-amps (utilizing inverting circuits for null common-mode input) for the primary stage and discrete transistors for the final stage in a high bias Class AB configuration (meaning that most of the time it is running in Class A). Interestingly, the A10 comes with a kit (including a chip removal tool and 2 daughter boards) for upgrading the op-amps.

For maximum performance, I performed all of my listening tests running off the battery, though it can be run while charging via micro USB or an external power supply (presumably available from Aroma though it may be a third party device). Using the Questyle CAS 192 Current Mode DAC as source and the MrSpeakers ETHER C Flow Orthodynamic Headphones I was easily able to get 8 hours play time, though I did listen in the “Low” gain mode, it was at a fairly high volume so I don’t think you would get that much less in “High” gain.

I began my serious listening session with Derek and the Dominos cover of “Little Wing” (Layla and Other Assorted Love Songs – DSD), at about half volume in “High” gain the dynamics were gripping, giving a very live outdoor concert feel, Eric’s lead guitar laid back in the distance with his vocals in the middle space along with the B3 organ, bass guitar and rhythm guitar and the impactful drums up front.

Turning to my standby “The Firebird Suite” (Eiji Oue & the Minnesota Orchestra – Stravinsky – DSD) to get a sense of the tonal balance, the soundstage was huge and the tonality very neutral leaning towards reedy, though the bottom was not quite as pervasive as I have become accustom to. The tympanis were crisp and the crash of the crescendos epic. The violins seemed to stand out and the mids were a bit soprano, not bright exactly or even thin, but not quite robust. The imaging was excellent, it was easy to picture the layout of the orchestra with the first violin on the right with the rest of the violins on the left.

To get a sense of the A10’s treatment of piano I turned to Elton John and “Madman Across The Water” (Madman Across The Water – DSD). The piano had the solid richness of a Yamaha without the brittle sparkliness I was expecting. The bass was strong and forward, slightly in front of the vocals and piano. Again the soundstage was huge, and the orchestra was much fuller than experienced earlier, in fact the whole was on the warm side which may be a product of the recording. Instrument placement was laser sharp without drift. Also once again, the dynamics were appreciable; it was very hard not to get lost in music and forget to listen for specifics.

Time came to switch from headphones to IEMs, and first up was the Noble Katanas. I selected “The Crystal Ship” by the Doors (The Doors – DSD) for its quiet opening and the noise floor was quite impressive, even in “High” gain mode (though in the “Low” gain mode I could not listen at levels higher than 1/3rd volume, so I did not attempt “High” gain with signal). It was like being alone with the band in a large cavern, Jim’s opening line read against a black background.

The sub-sonic bass extension was palpable while listening to the bass pedal notes of “Non Mi Lasciare” (Dario Baldan Bembo – 16/44.1 kHz), the piano rich and robust. While the operatic vocals were not rendered honeyed, they were clear and undistorted, and as previously noted the dynamics were extreme and the soundstage gigantic.

For a little preview of things to come, I plugged in the Aroma Witch Girl Pro IEMs using a Silver Dragon cable and cued up “Samson” by Regina Spektor (Songs – 16/44.1 kHz). As one would expect there was excellent synergy between the A10 and the Witch Girl Pro, the solo piano and vocal rendered as recital performance in a large living room.

Changing source to my Samsung Galaxy Light, to say that you get out what you put in is to make understatement. I listened to Suzanne Vega’s live version of “Luka” (Live at Montreux – 24/48 kHz) direct and through the A10 and the only difference was a slightly greater sense of space and improved dynamics. Switching back to the ETHER C Flows I had to run both the phone and amp at full volume, but the sound was surprisingly good, bearing out the A10’s intended purpose.

As I final test I ran some streaming music via Napster (which actually had a little more output than the player app) on the phone (Camel’s “Spirit of the Water” – Moonmadness) and was reassured that the A10 didn’t add any unpleasantness to the low resolution content.

Aroma is a company to watch, their first offering hit it out of the park. If you have one of those really expensive DAPs that needs an external amplifier, or if you would just rather use your phone for your music source, then the A10 is a must have, even if you are only using IEMs, and at a reasonable price. If you are looking for a signal processor that will make a product that actively sounds bad, sound better, then the A10 is not that, but there are plenty of DSP apps that can do the job better than an external amplifier that is in effect degrading the sound (even if you like the results), but if you want to get the most out of your source and headphones then the A10 is a great choice.