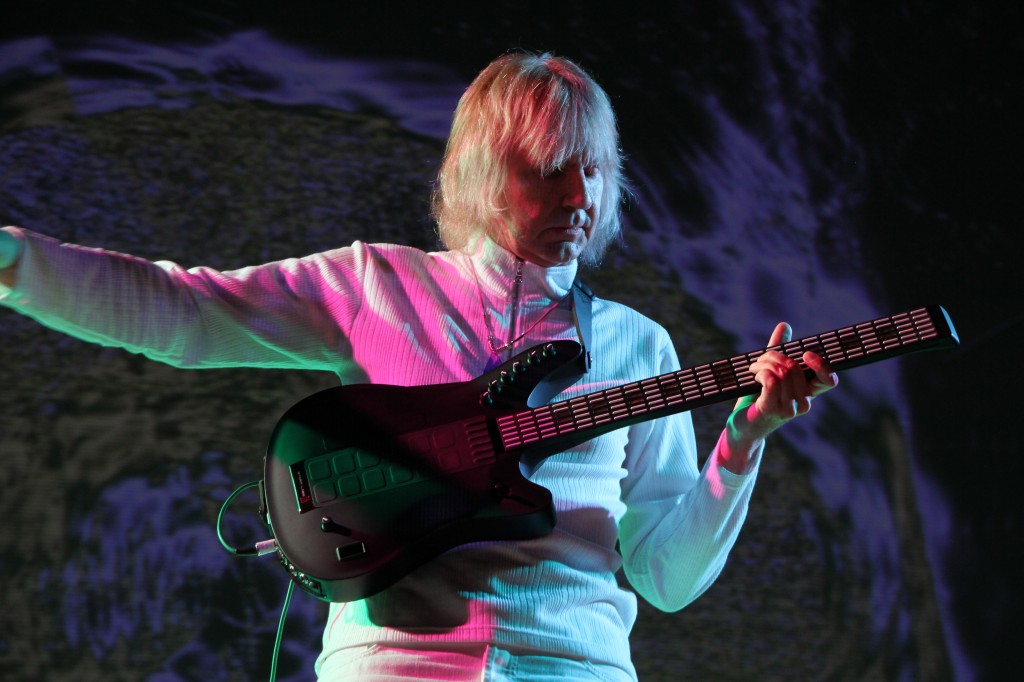 In my nearly 50 years of being a professional guitarist, composer, producer, engineer, sound designer, synthesist, and educator, my goal has always been to explore and create an audio experience which takes the listener on some kind of fantastic journey into the inner depths of their mind and the universe. There were many steps and stages in my career in trying to achieve these goals. I found very quickly that there are three “basic” steps in this processes:

Number one is a process of mind and spirit. This area is highly uncodified and remains a subject of mystery and opinion. Many creative people basically surrender to the idea that their creative ideas are coming through them from some higher source and they are just an instrument receiving them. To others, it is just a mechanical exercise where past experiences (memory) and current experience sum to a new rendition of the same themes. I personally do not ascribe to either one of these positions. In this month’s article, I will briefly share my own experience and observation concerning step one.

Number two is technical. This is an area where much attention has been placed. This includes the training that musicians must go through to develop the proper technique to express their ideas. This is usually broken down into theory and physical training. The musician must learn about the subject of music…how to read and how to compose music. The musician must also train physically to play an instrument. They need to learn communication skills to play together in groups. There are many music schools and just about that many different modes of thought on the best way to accomplish these above activities.

Number three is how the music should be experienced and shared by the listener. This step includes knowledge from step one and two but it also has its unique aspects. For example, usually the final product that the listener experiences can be quite different than the original. In most cases, people listen on equipment far inferior to the equipment with which it was originally created. Then again, you have audiophiles that have equipment far superior to the original source equipment. What is the difference in the musical experience in these situations?

I will explore these subjects every month here in Event Horizon with hopefully, an interesting and new approach that might shed new light on old and ongoing controversies concerning human perception and idiosyncrasies of audio equipment.

Step One : Getting Something From Nothing

During the creative process, often step one and step two are at odds with each other, which sometimes makes the whole process daunting and frustrating. They are at odds because of the factor of time. It is one of the physical universe’s most basic attributes. Time is possibly the most basic abberative factor to the human condition. We never seem to have enough of it.

Let’s consider….essentially the creative process occurs continually moment to moment in present time…in the “now”… realtime. The rendering, or more specifically, the technical steps required to manifest this creation into the physical universe takes place in non-realtime. The technical rendering, whether it is the musicians body performing the music or the recording process itself always inserts a latency to some degree. This latency has been a concern for example with the digital recording process. Latency can effect the outcome of the musical experience in a negative way. It effects the musicians performance and it can alter the listener’s experience.

I think to fully understand the first two steps of creating and manifesting music into the physical universe requires us to look at some fundamental basics.

Let’s look at step one. The source of the creativity seems to involve mind and some kind of concept of spirit.

In advanced quantum mechanics, it appears that everything that is manifest in this physical universe is in motion. Essentially, a vibration. That means everything. It seems that matter is actually wave patterns of varying degrees of density and frequency. Air for example, which we cannot see, is made up of basically five gases: nitrogen, oxygen, water vapor, argon, and carbon dioxide. But these gases are in turn made up of molecules which are made up from particles called electrons, protons and neutrons etc. These are all in motion. But it goes deeper than that. Each one of these particles is made up of more basic particles, such as quarks and leptons. These also are broken down to smaller and smaller “wave” packets. These wave packets eventually become so small that they become unobservable, even in theory. This point is called the Planck Length. The Planck wavelength is 1.61619926 ×10-35 meters.

It is at the Planck Length where the physical universe becomes manifest or observable. Anything below the Planck Length is unobservable and could be called virtual. Even energy breaks down into disassociated components. In this unobservable or virtual state, everything becomes potential. The quantum potential. Within this potential, there is no time, space, mass or location…everything is everywhere at once.

I have heard many times from various recording engineers that analog audio is more natural than digital and that it parallels the universe, which itself is analog. But that analogy seems to break down when one considers that at the Planck Length, the wave patterns are quantized every 1.61619926 ×10-35 of a meter. At its core, the physical universe may be more digital in nature, although with much much higher resolution!

So what has this to do with audio exactly? Everything is a wave pattern. Sound is a wave pattern. These patterns are energy in motion. With sound, it is the pattern…the frequency, the wave shape, phase, amplitude etc., that determines how that pattern will be experienced once detected by the human hearing system. It also appears to be the same for the physical universe. The pattern in the energy determines how that energy pattern is perceived by human perception. In other words, the pattern is information. This information for example, determines if we are seeing a chair or a glass of water.

Here is another very interesting aspect of the quantum world. The particles, that we think of as a solid thing, actually exist in a superposition of infinite possibilities that spread out waves of possible locations; each of them exists in all of those possibilities at once and it is only at the instant that you “observe” this field of possibilities that it snaps into just one of those possible positions or status. This observed potential is given energy by the observers attention. By constructive wave interference, resonance and energy are increased. Given enough energy, the quantum threshold is breached and the now single observed potential becomes a manifested thought in physical reality.

So then, the next question one could ask is, “who is doing the observation?” Here we have the aspect of spirit coming into focus. It is basically simple. The spirit is you. You are doing the observation.
Creativity comes from this observation process in the quantum potential. As one observes or focuses their attention into the field, a specific thing (idea) emerges from what appears to be nothing (unobservable, infinite potential) into the physical universe (observable discreet physical mass).

Let’s continue further with this train of thought. When it comes to music, for example, this observable discreet physical mass manifests first in the mind as a type of mental image picture (MIP). Maybe a note, a chord, or a sound. Even emotions are just an energy pattern, which is included in the MIP. These MIPs are not just a visual representation, but can potentially contain all the human perceptions required for a three-dimensional, physical world experience. The MIP is physical because it is made up of electrically charged particles which have mass and weight and can be measured. This may well be the basis of the mechanism by which we respond to the musical experience. When we listen to music, we experience emotions, we can see images, our physical bodies move in resonance to the sounds. This is how we “feel” the music. It is all resonance.

It takes zero time from the moment of observation in the quantum potential to the instant it manifests into the physical universe. There is no latency in the process up to this point.

This concludes the outline of the first of the three basic steps.

In the upcoming months, I will outline the next two steps as well as go into great detail within each of these steps.

I will also from time to time review various new and evolutionary audio gear as it relates to innovation and which pushes the envelope to the bleeding edge.

And finally, occasionally I may report some of my interesting musical experiences, such as my four year stint recording and performing with Michael Jackson, as well as working with interesting technologies such as high definition spatial audio.

Or… just type my name Christopher Currell into your browser.