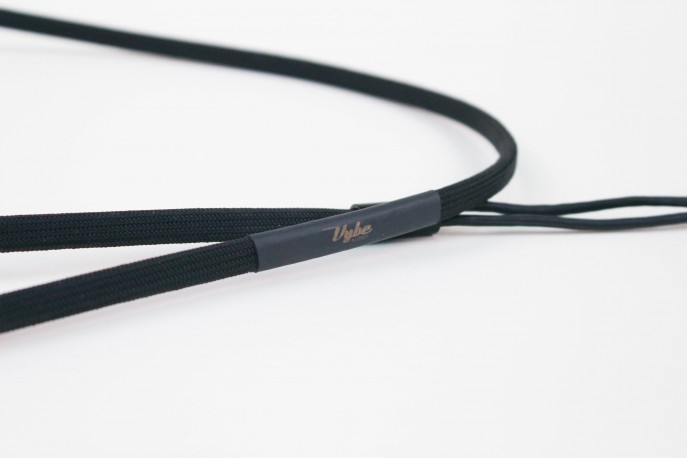 I have to say that reviewing and comparing audio cables can be one of the hardest things to do in audio. I usually look to cables as my final “tune up” to my audio system after the headphones, headphone amplifier, source material and DAC are all dialed in. Differences are certainly more subtle and difficult to fully appreciate. I’ve never had a cable (interconnect, speaker, or headphone) change the sound of something so much, that it went from just average to incredibly good sounding. However, with that said, it can really be the finishing touch on a great setup.

Vybe Audio (owned by WM Industries in Colmar, Pennsylvania), is a family-owned business. WM Industries actually is a high-end manufacturer of threat detection systems, robotics and other defense-related products. They supply the U.S. military and law enforcement agencies with remote operated threat detection vehicles and other products. WM Industries also has another passion: consumer electronics. The company has flown under the radar for a number of years as an OEM manufacturer of award-winning, high-end audio components, and it was only a natural progression that they would branch out as both a manufacturer of its own products and as an online retailer.

The cable manufacturing business started out as a project for another personal audio brand, but in time they developed a full line of cables (speaker, DAP, headphone, power cords, interconnectors and adaptors) called the TIMBRE line. The company focuses on both value and quality and while their cables are not inexpensive by any means, the vast majority of them are priced below $300 and are very competitive in their market segment. Interestingly enough, Vybe Audio started making the headphone cable for the well-known and well-received MrSpeakers Alpha Dogs, as an in-house project for two of its staff members.

For this review I thought it would be great if I could trial a TIMBRE HP-1 cable made for my new Hifiman HE1000 headphones. These are, in my opinion, the best non-electrostatic headphones I’ve heard, or owned. They are wonderfully rich and quick sounding headphones that are as close to “neutral” that I’ve come across in the dynamic/ortho-dynamic world of headphones. We have an current HE1000 review here on Headphone.Guru, and I urge you to check it out for more information.

Here is a list of the specifications for the cable:

The HE1000 aftermarket cable that I used for this review was 5 feet in length and terminated with a 4-pin XLR balanced connector. Vybe also included a 4-pin female XLR to ¼” stereo TRS adapter cable, so that I could try the cable with my single-ended Resonessence Labs Concero HP and Astell & Kern AK240SS DAP (digitial audio player). The costs of each unit are certainly what you would expect with regards to similarly built products ($350 for the cable and $200 for the adapter).

Upon first receipt, the workmanship and build quality of the cable and adapter were certainly top notch. The cable was wonderfully light and was testament to Vybe Audio’s commitment to quality. The outer sleeving was such that the cable was never microphonic when used; a problem I’ve had with a few aftermarket cables I’ve used in the past. So for the money, the value of the build quality was very clear.

Now on to my listening impressions…

To run the Vybe Audio cables through their paces I used 2 different setups:

As I knew from previous experiences with cables, the differences can be quite nuanced, and as a result, I tried to stick with more complex music with a lot of different things going on in the recording, in order to better pull out these differences.

So right away, first up was my 192kps high resolution file of “Jazz at the Pawnshop” through my main desktop rig. Not only is there a lot going on with the musicians in this recording, but the crowd plays a very large part of the details that are present and make for a holographic effect in 2 channels.

Now I want to stress that with cables, I recommend that they are among the last thing you look to when tweaking and improving, after the transducers, amplifiers, DACs, and source(s), as the differences in improvements can be pretty difficult to judge. When comparing the Vybe Audio Timbre headphone cable to the stock cable provided by Hifiman for the HE1000s did indeed follow this trend of being more a “final tweak”. I will expand on that shortly. But I have to really commend the folks at Vybe Audio on the build quality of the cable and adapter that they produced. From the connectors to the cable itself, the workmanship that went into building this product was quite impressive…especially when compared to the more pedestrian stock cable from the headphone manufacturer.

With regards to the sonic differences, while quite nuanced, I did pick up on some differences that set the two cables apart. The Vybe Audio cable offered a more full sound that helped focus the sound stage toward center stage, while the stock cable was a bit less cohesive. I found this improved centering better placed each player and audience member better within that pawnshop. Micro detail extraction was a bit closer between the two cables, but in the end I did feel that the Vybe Audio cable came out on top. It seemed to better pull out the smallest details from the audience that I didn’t think was possible with the standard headphone cables. Again, while not night and day, it was there to my ears and could be detected, especially over the long term with repeated listening to various recordings (and the same ones, for that matter).

Next up, I tried the same album, but this time in DSD played through my Concero HP unit. But unlike my first trial, this amplifier/DAC “all-in-one unit” does not run in balanced mode. That’s where the 4 pin XLR to ¼” TRS adapter by Vybe Audio came in. Again, the differences heard using PCM and my main rig were just as apparent using the DSD version of this recording. I then tried Norah Jones’ “Come Away with Me” (also in DSD), and found the fullness that I experienced previously, really did help ground Norah’s voice a bit better. It improved overall on the naturalness of the music that seemed to flow from the recording, a bit better than it did with the stock cable. As well, detail extraction at the lowest levels was improved upon over the stock cable, where the tiniest details of cymbal decay. Inner-workings of Norah’s voice and special clues were better presented and made the recording come alive.

Finally, I went to one of my standard recordings to test out the improvements that could be attained with the Vybe Timbre cable: Tool’s “10,000 Days” (on my main headphone setup). While some might say: “this is a rock/metal album, how complicated can it get?”. Well, I suggest that you give it a listen just to see how complicated it can be! The fullness was again improved with the Timber HP-1 cable, and that helped with a better impression of the dynamics, especially with the thump down low (which this album is well known for). It simply sounded more alive than with the stock cables, and for someone looking for that last final tweak to your system…I strongly suggest you consider this great aftermarket cable.

So in the end, yes, I did hear an overall improvement from the stock OEM headphone cable compared to the Vybe Audio Timbre HP-1. While not “night and day” differences, they were certainly there, with a slightly improved fullness and centered sound, with improved dynamics and detail retrieval of the smallest nuances in the recordings used. The build quality and construction was top shelf, when I compare them to similarly priced products from different manufacturers. So, once you’ve settled on your main components and headphones, and are looking to squeeze that last little bit out of your setup, look no further than the Timbre HP-1 aftermarket headphone cable as a great option to get you all the way to your audio nirvana.