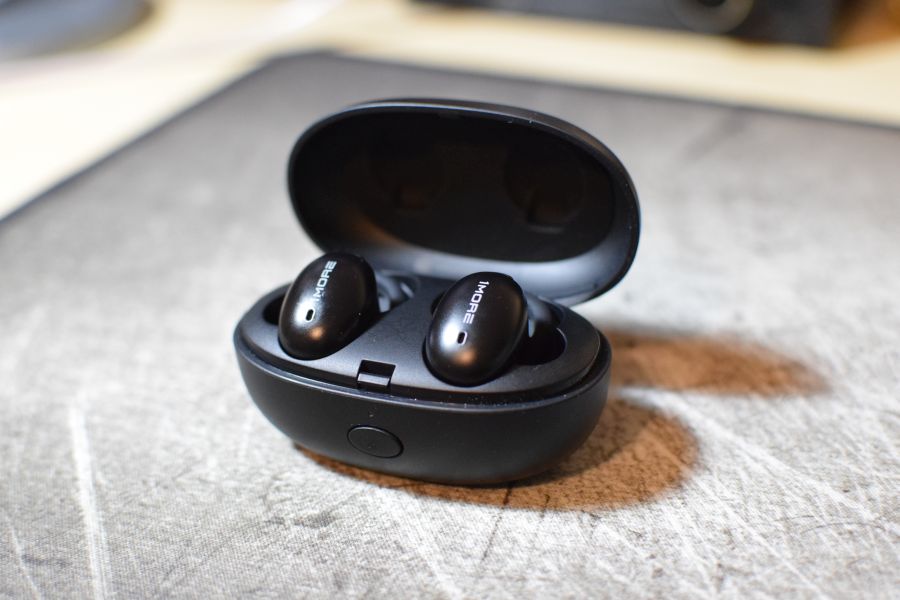 Design, Style, Technology, and Innovation. It could be said that these are the terms that embody 1MORE’s western push. Headphone.Guru has reviewed products from our friends at 1MORE in the past and we have adored them. From the Triple Driver to their gaming headphones to their Bluetooth neckband products, 1MORE is pushing out great stuff.

This time around, we have their new 1MORE Stylish True Wireless In-Ear headphones which bring about “True freedom” backed by “Exceptional Sound” as their website notes. With a plethora of True Wireless (TWS) devices on the market these days, can a wireless device from 1MORE with no wires and that has the word ‘stylish’ in it compete against the behemoths? Hell yes. I went into this product with the mindset that it focused more on usability, looks, being petite and just bobbing in the water of the field without making waves. Don’t let the “Stylish” model name fool you, this thing packs some serious sound for its size. Let’s dive in and see what 1MORE is dishing out.

The Stylish True Wireless comes in a petite package and is one of the smaller TWS on the market. Whereas other brands have larger drives and big carrying cases, 1MORE opted for the size of two polymer block erasers stacked on top of each other. The carrying and charging case is a matte color and is very minimal. One LED indicator on the front, a push button to open the case, and a micro USB-B charging port on the back.

Quick background information on True Wireless in case this is new to you. There is no dedicated charging on either of the earphones themselves. You charge the carrying case, and the carrying case, in turn, charges the headphones when you put them back. When you put the earphones into the case, they automatically turn off and start charging; an LED indicator lights up briefly telling you charge state as well. When you pull the earphones out, they automatically turn on and attempt to synch with the last known device. This unit comes with a total usage time of 24 hours but that includes the battery capacity of the case itself. The dual units themselves will last a reported 6.5 hours of playback at 50% volume before needing to be docked in the case again. My independent testing shows 5-6 hours of battery life making it quite accurate. For the record, 50% is plenty loud already and is a good volume to stay at for most users casually listening.

The headphone uses the crazy good Qualcomm connectivity chipsets. The earphones are near seamless in connecting and maintaining a rock-solid connection. The host device (your smartphone typically) plays into this equation, and so long as the 1MORE TWS was the last device it was connected to, taking the earphones out of the case and it will be paired right as you put them in your ear. I do a multitude of wireless reviews for Guru so half the time, the 1MORE was not my last paired device and so it takes another 20 seconds of me manually changing my Android smartphone’s Bluetooth to connect. For the 90 percentile of users, this device will auto-connect lightning-fast and maintain a strong hold.

Rock-solid stability goes a long way, a really long way. This unit comes with 1MORE’s LDS antenna which allows for more stable communication and distance. I was able to, outside in an open field, go more than 50 feet away from my smartphone without any noticeable drop. While indoors, I have a range of almost my entire house and can go behind walls without drops. It’s only when I start getting more than two walls in between the True Wireless headphones and the transmitter than I start getting signal loss.

The 1MORE Stylish TWS is also leading the class in being dead silent while on AND when the music is playing. The majority of other wireless headphones I have and have heard at shows, have light amplifier hissssssssss (add some more S’s and you’ll start to get how annoying this is)  when the units are turned on. Some are constant, while others do a dynamic suppression of this noise by turning off the amplifier and only turning it on when music/sound gets played. This is better but then you go from dead silent to hearing the background hiss when music starts up and in some cases, an amplifier pop. 1MORE has completely scoffed at this and at just $99 has no noticeable noise of any kind whether it be when music is playing or when idle with no music. I heard three other audiophile targeted True Wirelesses at Canjam and they all had varying degrees of amplifier hiss. Simply outstanding.

The headphone also comes with the most intuitive and easy multi-purpose button. There’s a tiny low-resistance button on the top of each driver. Not only are they easy to find, but pressing them causing no pressure on the ear canal, unlike other units which press into your ear when the button is pushed. Simply grip the bottom of the driver with your thumb and press the button with your index finger.

The weirdest part of my whole experience is that this is one of the few products where the product page truly is what you get. You truly do get working multiple codecs, the ability to use either driver independently, and the battery life numbers are real. You truly truly have lightning-fast connection, and rock-solid stability and range! Truly Truly? Yep, this is the 1MORE Stylish True Wireless putting other products to shame. True Freedom check, true product pages…check. Ignore the misleading Stylish in the title, this isn’t just a fashion accessory, its packing serious heat underneath the petite black sundress it has on.

The 1MORE Stylish TWS was used primarily with my Essential PH-1 Smartphone, Dell XPS 15 9550 laptop, and Desktop with the ASUS BT4 USB adapter. It was fast and seamless to connect on virtually any platform. Windows Bluetooth is typically on the lower end of quality in regards to it being the Bluetooth host. Windows support for Bluetooth is not as intuitive, has weird delay timers, and is clunky and oftentimes slow. A third of my Bluetooth devices have issues connecting with it on both my computers. 1MORE outshines the competition again and says “Not Today” to Windows issues. It pairs easily every single time. I got 99 problems in my day to day and Microsoft Bluetooth issues ain’t 1 More…literally.

This earphone is not an audiophile earphone nor does it try to be. It’s meant more so for consumer mainstream music and it does its job faithfully. The review will not review it like an audiophile piece of machinery and discuss why I can’t hear the background singer that was situated 40 ft away or how it lacks compared to the Sennheiser HE-2. Rather, the sonic section will be more comparisonal relative to other headphones in the sub $200 price range.

Starting off with some modern hyper rock/pop mix from Japan, Raise a Sullen with “RIOT” is first up. This is your typical contemporary mixed song with fairly squished dynamic range, a bit of bass, fast instruments, and meshed with EDM elements; it’s the type of music (sound characteristic wise) most people buying this earphone are listening to. And wow is it fun, the most discerning thing about the 1MORE is that it has resonance and oomph to make the music thick with the right amount of bass and vocals to make it enjoyable. Like the cornstarch and thickening agent in a lot of cooked meals, without it, you end up with too thin a mess that sounds tinny. The TWS is weighty, dark, and incredibly engaging which help it with mainstream music that relies on “dank beats” and thick backing track to carry it through.

Vocal and background separation in the song is above average and surprising for the size of the driver and housing. The song is fairly complex with its background mix with lots of laser beams, electronic ramping, and has a live concert feel to it (because that was its intentional playback audience). I was anticipating the vocals from Raychell to be more drowned out but in reality, it co-exists with the surrounding elements in equal unison. Both happen simultaneously and complement each other. With more advanced full-size headphone setups, the separation would indeed be more pronounced and clear but this is more than satisfactory for the tiny drivers.

For good measure, I wanted to include an audiophile loved song, “Thanks To You” by Boz Scaggs. This song is thick and bassy and has some of the highest quality low-end you can think of reproducing. The 1MORE TWS Stylish crushes the bass department. The extension is low enough that you can hear and FEEL the rumble and vibration into your chest. Impact is also present and produces a nice oomph to the song without too much overextension into the mids; which while present doesn’t muddy up the vocals.

Boz’s voice in the song is smooth, delicate and right in the middle in terms of placement. The 1MORE TWS is neither forward nor held back, it’s simply center to everything. This helps it in being a great passive listening earphone for gym, youtube, or walking through the city. Vocals that aren’t overly pronounced and with slight recession are usually better at letting other elements shine with the mids taking a backseat to say the background beat or to give a chance for the bassist to finally shine!

So what do I think of the sound of the 1MORE Stylish TWS? It’s like whiskey, dark, smooth, balanced, with some coarse smokiness. It’s perfect for relaxing and is neither bright nor in your face.

If you’re looking for an affordable True Wireless earphone packing consumer creature comforts, honestly just take a look at these. They pack vibrant sound with industry-leading connectivity and usability at a beyond affordable price target of $99. Other similar priced audiophile targeted TWS sound better but have reduced usability due to poorer connectivity and increase in size. For the majority of the users on the market, the 1MORE is more than they will need on the go. 1MORE has killed it with the “STYLISH TRUE WIRELESS IN-EAR HEADPHONES” and we are looking forward to what they have for us in the future.