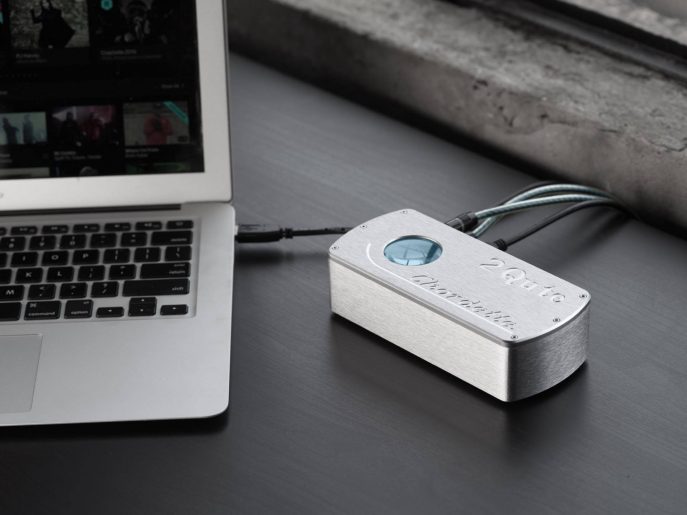 Chord is on a major roll with the digital designs that Rob Watts and John Franks keep creating and bringing to the market. The introduction of the Hugo into the world created a stream of positive reviews and enlightenment to what musicality is possible in the  digital domain. Long gone are the days of digital nastiness leaving fading memories of listening fatigue associated with early digital products .  When Sony first introduced the CD player back in the 80’s and declared perfect sound forever, many would find out that the slogan was actually inaccurate as to what the CD’s actually sounded like. Those day brought recordings back to the dark ages and drew more people into vinyl and analog recordings. The sound left much to be desired and created an avalanche of high end engineers working on solutions that would take years research and work to realize the full potential of digital recordings.

The early days had people regretting that digital became reality. Companies scrambling to rid the nasty sound with filters and converters were popping up all over the world. Some had some initial success at curbing the nasty sound of digital recordings but none ever fixed the problem entirely.  Fast forward to modern times and Chord’s  Rob Watts continues to push boundaries and set entirely new benchmarks. The work and sound of Chord products continue to define the word reference in digital converters. Chord has taken digital products to another stratosphere and his  genius is evident in all Chord products he creates.  The team of John Franks and Rob Watts keeps developing the finest digital products in the world and continue to astonish the word while setting the bar higher.

When I first owned the  Hugo, I knew that digital would never be the same.  The design had an excellent  amplifier  and portable built-in digital DAC that made headphones sounds incredible and  similar to mega priced speaker systems costing many thousands more.  Used as a portable device it made music on the go more realistic and easy to transport. People who listened to it could not believe they were hearing a device that sounded as good as full range systems that were only available in high-end shops or homes.

The new transportable world was under way as more people became accustomed to using headphones and portable solutions. Hugo created a stir in the high-end community that was missing for a long time and created new and enthusiastic listeners and revived the audio market. The 2Qute has the same FPGA DAC as the Hugo without the amplifier section. Designed primarily for use in a home based system for people who may want to use it as a source or may already own a reference caliber headphone or speaker amp.  The lower price allows for listeners looking for a reference digital source that has the magic of the Hugo but is more attainable.

The 2Qute design is basically the same custom FPGA DAC found in a Chord Cordette chassis. The DAC has a 384Hz USB input an also includes a 192Hz optical input. Included is a coaxial input for transport users using CD’s. There is one high quality RCA output and the 2Qute supports up to 384Hz high resolution and also converts DSD files. The build quality is all Chord. Housed in a small chassis with improved isolation making this a striking design and will feel right at home either on a desk or in a rack.

My reference system has the Chord DAVE as my main DAC with its built in amplifier and and also the VPI 229D tube integrated amplifier which has a world class headphone amplifier as well and the capability to drive most any speaker designed today. The 2Qute was swapped in and the DAVE removed for the listening sessions. The unit Chord sent me was a review sample so no break in was required and I was able to fire it right up for listening.

Snuggling up to the system with my favorite music and using both Tidal, Audirvana and iTunes files as my source I started playing music. The 2Qute has the magical Chord sound. The bass impact was similar in definition to all other Chord products I have auditioned and the musicality and tonality was spot on. The sound coming from the 2Qute was better than most other digital DAC’S that have been in my system and competed with DAC’S that were more expensive. The sound differences between the DAVE and the 2Qute was noticeable but never stopped me from wanting to listen to music or distracting me from being consumed with the sound. The 2Qute did not have the soundstage or the air and separation of the DAVE. Missing was some of the expansive stage and air between musicians that the reference was able to provide. The tonality was similar but the DAVE has more refinement with better bass control and more transparency but only a small increment better the than 2Qute.  The differences were small but the DAVE, priced much higher, was better, with more detail retrieval and sound staging. The 2Qute never faltered in direct comparison and priced substantially less was a remarkable achievement for Chord.

Listening to tracks from Greg Brown’s Slant Six Mind let me hear his outstanding vocals and the guitar licks of his acoustic guitar were strikingly realistic. The story telling songs from Brown came alive on the tune “Mose Allison Played Here”. It was as if I was transported to the venue with Greg’s lifelike vocal and the inner detail of his acoustic guitar jumping out at me. The sound was magical and the vocal was clear and non sibilant, no matter if I was listening to the song on the Fritz Carbon 7 monitors or my best headphones. The sound had dynamic drive and tonality that kept me involved and never lost me. Brown’s playing had me totally consumed with the song and the 2Qute imaging was spectacular.

I felt myself not wanting to stop listening to Greg Brown’s magical way of delivering his songs. Completely involved with the music, my listening session with Brown lasted into the early morning hours. The mystical voice of Adele on “Hello” from her album 25 is a journey into the heart and feeling of a gifted songwriter and musician. The sound was magical on the 2Qute while using Tidal’s streaming service as the reference and the 2Qute was able to deliver her vocal with vivid transparency. The sound was crisp and alive capturing all the qualities Adele is known for in her delivery.

The sound had a rare musicality usually not found in digital products in this price range. The 2Qute  just played music and omitted little in  comparison with the reference DAVE. Never did I feel cheated in listening to her performance and was enamored with the dynamic sound that the 2Qute was offering, The bass was always extended and at times, when the recording demanded  impactful thundering bass, the 2Qute delivered with speed and finesse.

YoYo Ma’s album “Sing Me Home” isan excellent track to test  treble extension.   “O’Neill’s Cavalry March” presented the violin as extended with exceptional detail and finesse. Never was it edgy or harsh and I could hear the Cello and flute clearly with excellent inner detail of the instruments. In a poorly engineered product this track would make you ears ring. The 2Qute sailed through it with with a clean and extended treble presentation. The music had air and separation and YoYo Ma’s exquisite cello was alive and had tremendous amount of detail and tonality. The track “Little Birdie” with Sarah Jarosz on vocals had  her  front and center and sounded alive with exceptional clarity. The 2Qute delivered a first rate performance of an exceptional album and tonality was a good as to gets.

As a reviewer I get to listen to products in all different price ranges from the affordable to the ultra expensive statement products. Never with any Chord product that has  been in my listening room have I ever been disappointed. The Chord team continues to build world-class products that shake up the digital order of what is possible. The award winning Hugo opened many an eye to what was possible in transportable audio and the Mojo pushed the envelope higher with a much more affordable price and opened up thousands more to the realm of digital audio. Upon reviewing the DAVE I knew music listening would never be the same once it left so much so I had to purchase it.

The 2Qute is another example of musicality and tonality that never embarrassed itself in comparison to the much more expensive  DAVE . The $1299 retail price while not inexpensive is truly a bargain for this level of perfomance  The world class midrange with exceptional treble and bass made the unit sound robust and dynamic. The real strength of 2Qute was its musicality. The long listening sessions were never fatiguing and the sound was always involving. Tonality of instruments and air and separation within the soundstage were all first rate. Both male and female vocals came to life and always sounded  captivating and realistic. If you are looking for ultimate musicality in a small and affordable package you  should audition 2Qute. It delivers the best of what is possible in digital audio at a real world price. Highly Recommended,