A DIY JOURNEY – THE FIRST STEPS 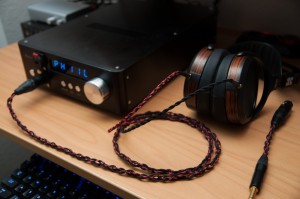 Starting a Do-It-Yourself project is in many ways like staring at the blank page of a new Word document. You have an idea of the end product (an essay or article or an amplifier or cable), a vague idea of how to get there (write and revise, solder and test), but no idea of how to actually start.

One day I got it into my head that I needed a balanced headphone cable and amplifier. I enjoy a nice open soundstage and the LCD-2f just wasn’t giving me that. I’d heard that going balanced opens up the soundstage and so that was the next logical step since I was otherwise happy with the LCD-2f.

By the time I actually purchased a balanced headphone amplifier and was ready to take the plunge, I’d sold off the LCD-2f to try the HE-560. But I still felt the burning curiosity on how much balanced really affects sound.

Has the following scenario ever happened to you?  You decide to buy something relatively standard like a shelving unit or a headphone cable.  You head out to the store or website to buy one, find something that looks nice, and then you see the price.  Your body shuts down for a second as your brain devotes 100% of its resources to trying to understand how such a thing could be possible.  Your wife is talking to you, snapping her fingers in front of your face, but your brain is otherwise occupied.

How does $35 in parts turn into a $600 shelf?!” you ask yourself. “I could make that in my garage for a fraction of the cost! Oh wait… I don’t actually know how to do it though. And I don’t have the tools. And I’d rather just watch the game…”

Yes, I have that happen quite often and it happened to me when I started pricing balanced cables for my new rig. I have a business degree and I understand that sometimes it’s better to just pay someone to do it and save your precious free time for other activities. But sometimes none of that matters. Sometimes you just want a hobby.

I realized that I had a pretty sweet headphone rig after a year of slowly moving up the chain and educating my ears. What I needed now was a new hobby that would enable me to make use of my rig while doing the hobby. I realized that making my own cable would be a great way to do that and as a bonus I would end up with a better-sounding rig! With that decided, suddenly, I was looking at that proverbial blank Word doc. I knew what I wanted (a balanced cable for my HE-560) and I had a vague idea of how to get there (buy some connectors and wire and solder them together) but no idea of how to actually start.

I will be writing a series of articles describing my personal DIY journey in the hopes that it will help you should you decide to start yours.  I’ve completed three projects to date, two cables and one amplifier kit. I’m in the planning stages of my next project, which is to modify a vintage DAC. I have a few ideas of where to go after that, but I don’t want to get too far ahead of myself.

For now just know that I’m a relatively new to this hobby. I’ve made some typical mistakes as well as some face-palm mistakes that I am really embarrassed to admit too. Fear not! I’ll offer them all up here for your amusement and, hopefully, education.

The biggest key to success that  I have found so far in my limited experience to do the prep work and have a plan of action before starting . This may seem obvious to some of you but it’s something I had to learn. You see, I’m a tinkerer. I like to learn by doing.

I grew up a computer nerd. I upgraded my first PC from an 8088 to a 286 when I was just thirteen years old. I’d never done anything like it before, but my father had purchased the parts and provided the tools. His instructions? “Take everything out until you get to the motherboard, replace the motherboard, and then put everything back where you found it.” It took me all day but I did it and it worked!

My father got me started on the path and, as frequently happens, I surpassed his skill level in just a few years.  I got there by just tinkering my way through things. I understood intuitively that I would mess up something now and again, and fixing it was going to be as much of a learning process as doing it right the first time. I think this attitude is very useful in DIY. You can’t be afraid to mess something up.

That said, these days we have something called the internet, with which you may be familiar. It’s the grand repository of all human knowledge and if you’re reading this you probably have a functional understanding of how to use it. With this knowledge, you can prepare yourself to go into any project without having to ever guess the right way to do something. That tinkering skill will come in handy at some point, for sure, but there’s no need to recreate the wheel anymore.

My workspace. Not shown is the heat gun on the right.

So the first step in the DIY journey is arming yourself with the proper tools. My personal style when working through the prep work is to open a spreadsheet and start listing what I need, where to get it and how much it costs. Everyone has their own style and I encourage you to use what works for you, but do be sure to use a system. The last thing you want is to be in the middle of a project and realize you’re missing an important tool and, oh it’s 1am and everything is closed and good luck getting it tonight!

Before I get to the list, I’m going to mention one more thing. Feel free to use whatever brand or variation on these tools you like. I’m providing the ones that I personally used because I know some people don’t have the patience or inclination to figure it out for themselves (and that’s totally fine!) You don’t have to take my word for it, though; use your internet skills and find the best specific tool for your needs.

This list of tools will take you through a lot of your DIY adventures. You will eventually need more tools for more specialized jobs later (I now own a box of latex gloves!), but these are the basics.

If you took my advice and made a list and priced everything out in a spreadsheet, you may be having that sticker shock moment right about now! Take your time, I’ll wait. Okay, $270.67 is the grand total on Amazon at the time of this writing and yes, that is a good chunk of change. I’d like to offer up two observations that saw me through this tough time in my journey:

First, the price above is an absolute worst-case scenario; you more than likely already have some of these tools sitting around the house. The great thing about tools is they’re generally useful in many scenarios that you didn’t anticipate when you first got them. You’ll be reusing tools you already have for a new purpose and you’ll be doing the same with these new tools eventually as well. The Panavise for instance, has already come in really handy on a non-electronics-related project that I did.

Second, the more DIY projects you do, the more you’ll save. Eventually the cost of these tools will be nothing compared to the money you’ll save. For example, the headphone cables I made were modeled after one that costs nearly $300 for 3 meters. I’ll show you how to make your own for about $30 in parts. Every cable you make will save you about $270, so the first cable pays for the tools and you’re saving nearly three bills for every cable after that. Not a bad investment, if you ask me!

Now, good reader, you are prepared to take on your first actual project: making a balanced headphone cable. In the next installment, I’ll go over the parts you’ll need and the process for putting the parts together. I’ll also link some resources that I used as reference when learning. It’ll be fun, and you will get a rad headphone cable out of it — it’s a win/win! I hope to see you then.

*Disclaimer: Caution; the do-it-yourself projects described in these articles will almost  certainly destroy your stuff,  injure you,  make you repulsive to the opposite sex, get you sued,  and/or endanger your immortal soul. Everything described in this article is for entertainment purposes only. Neither I nor headphone.guru take any responsibility for anything  that could happen as a result of your reading this article.  You’ve been warned!