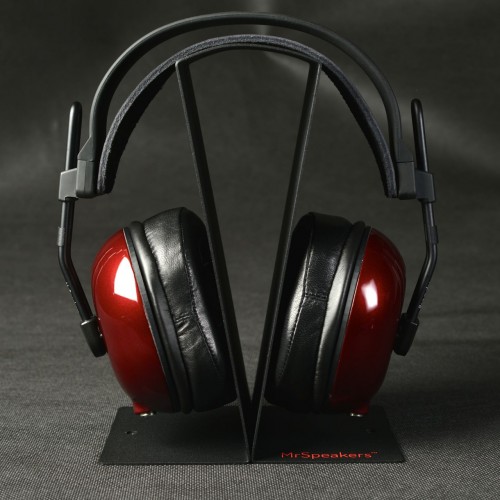 Prior to attending the Rocky Mountain Audiofest Dan Clark had mentioned that he was working on a modification to the Alpha Dog and the result was significantly better, so much so that it warranted a new model designation.

Dan felt that there was still a higher level of performance that was possible with the driver that would make the sound more defined and improve the performance of the Alpha Dog. The research led Dan on another path and his creative genius took over and he developed the technology that produced the Alpha Prime.

Intensive research and development led to a new way of configuring the driver. The V-Planar technology he developed addressed some critical areas of the driver performance. Dan knew that a conventional planar driver is assumed to move as a flat surface. According to Dan (who cites others) is that in reality this is not possible, as the driver substrate is not very elastic and is also “Locked” at the boundaries, so it moves as an arced surface, and that’s prone to creating oscillations on the panel.

A technique called knurling is used to address some of these issues. Knurling applies light creases to the traces across or around a driver to create mini-boundaries that break up standing waves on the driver and smooth frequency response.

The new V-Planar technology extends upon knurling by very deeply creasing the driver, enough to really leave deeper texture under tension. The re-formed material can more expand slightly as the creases open slightly during driver excursion. Since the drivers are now able to stretch more easily the panel’s motion becomes closer to the ideal, and with increased compliance the driver is faster and higher resolution. Dan Clark has more detailed information on the new technology on his website located here: https://mrspeakers.com/alpha-prime-headphones/

The Alpha Prime as a result of the engineering Dan built in the design has much better dynamics. The frequency response is more extended and has much lower distortion than previous models.

My first opportunity to hear the new Prime was at Jude Mansilla’s annual CanJam at the Rocky Mountain Audiofest. Pushing the play button on the music server I immediately noticed better bass resolution with more definition and deeper extension. The bass appeared to be faster with much greater impact (head rattling). Transparency also was improved and the treble was more refined and extended than the previous models offered. Everything from the midrange to the upper treble seemed more coherent. The imaging, always good on the Alpha series, was now at another level entirely.

The November NY Headfi.org member meet was held this year in Stamford Ct. Dan Clark was at the meet, but it also was my daughter Michelle’s first Headfi.org meet and a special day for me. My daughter has Down syndrome and is a music lover and headphone geek with her own headphones. Sharing a table next to MrSpeakers kept Michelle busy. If you’ve been to shows and meets where Dan is present you know the traffic at his table is non-stop and always crowded. I was able to listen briefly as many members were crowding around Dan with questions and anxious to hear the new technology.

Dan asked me at that meet to send him my Alpha Dogs and he would do the modifications that would change it to an Alpha Prime. The modification would require the drivers to be replaced and re-engineered and would not take long. The Alpha Dog has become my go to closed headphone and knew that being without it I would miss it terribly. Knowing when they returned I would have the opportunity to listen to the Alpha Prime in my own system with music I was familiar with had me anxious and excited at the same time.

10 Days after sending the Alpha Dog in for modification the Prime arrived. Like a kid at a candy store opening the box was exciting. I could not wait to get it unwrapped and installed in my system. Plugging it in to the Cavalli Liquid Gold and using the Oppo BDP 105 and Tidal as my main music source I immediately got consumed with the music.

The “Art of Conversation “ an album by Kenny Barron and Dave Holland is rich with midrange and bass. Dave Holland’s acoustic bass on the opening track “The Oracle” is defined and extended. The bass notes were transparent with texture, definition and extension. Barron’s piano playing was masterful. Both performers were in their own space and the bass definition was noticeably better than it was on the Alpha Dog. The Prime was a different headphone with more definition, and the imaging was now razor sharp

“Hallelujah” is a legendary song written by Canadian songwriter Leonard Cohen. Listening to KD Lang ‘s performance from her “Hymns of the 49th Parallel“ album is one of the best performances of this classic song I have heard. The Prime placed KD in the center and upfront on the stage. It was as if I was at the concert sitting in a first row seat. The vocal was articulate and there was just the music. No sibilance was evident in the recording. The Prime was excellent with portraying her image with separation and space between her and the backup musicians.

“Minipops” 67 from Apex Twin’s “Syro” album has deep bass extension and terrific impact. The Prime’s performance was magnificent with electronic music. The grunting bass on this recording had my head rattling, yet was articulate and tight. Nothing was missing from the performance.

The New Basement Tapes compilation of Bob Dylan bootleg songs, produced by T Bone Burnett, is an excellent collaboration featuring Marcus Mumford, Elvis Costello, Rhiannon Giddons, Taylor Goldsmith and Jim James. Dylan’s lyrics come to life on this stellar recording. The Alpha Prime was very dynamic and had my head and toes bobbing and weaving to the tunes.

Rhiannon’s vocal on Spanish Mary with her banjo was totally engulfing. Consumed with the performance this soulful vocalist had my undivided attention. The Alpha Prime was so good at recreating the space within the recording. The soundstage was very wide on this track and it felt like the headphone was performing like an open headphone. Many closed headphones have issues with creating a soundstage and can make the listener feel confined. The Prime takes closed listening to another level and ranks with the very best in recreating a wide and deep soundstage. It feels as if you’re listening to an open headphone.

Grammy winner Sam Smith’s “In the Lonely Hour” is another of my favorite releases. “Stay with me” also highlighted the soundstage and Smith’s articulate vocal. The music is dynamic and fast with excellent bass. The Prime was able to sort out the arrangement and put each performer in their own space within the soundstage with air and separation between the performers.

Pitbull’s “Globilazation” album is presented with fast pace and excellent bass. The album makes you just want to dance. The Prime had the speed to recreate the performance and make Pitbull’s performance believable and alive. The music had me totally consumed. I never wanted the music to end. The Prime evaporated and left me with nothing but terrific music.

Ed Sheeran new album” X “has a dynamic get up and kick ass beat to it. Sheeran’s “ I am a Mess” will get your body grooving. The Prime made it a fun listen and made the

song exciting. The vocal was articulate and track after track I could see why Sheeran’s star is rising. Listening with the Prime kept my attention and had me totally involved with the music and the artist.

Critically listening on the tune “Sing” I could hear the extension in the treble. Missing was any evidence of any shrill sound or harshness Many headphones fail to deliver proper extension in the treble area. The Alpha Prime had the refinement that made percussion and cymbals sound lifelike with the proper amount of shimmer in the delivery.

The many hours spent listening to the Alpha Prime confirmed in my mind what I had already concluded months ago; Dan Clark is a gifted and serious designer. Dan’s endless hours of research into design technology show his commitment to designing serious musical instruments. He has taken the Fostex T50RP and recreated an entirely different headphone. The innovative technology he developed from working with prior designs transformed his new creation into a spectacular and accomplished design. The Alpha Prime is a serious headphone that gets it right musically. The Prime is an emotionally and musically rewarding monitor.

Dan has assured me that the Alpha Prime modification is final. There will be no more modifications to the design. Dan feels he has achieved the most from this model. After spending considerable hours using the Prime I can confidentially say this is one of the very best closed headphones I have experienced. It is very comfortable and can be worn for long periods of time and lets me concentrate on what matters most-the music.

The market is getting very crowded with reference headphones and good closed phones are hard to find. The Alpha Prime narrows the gap in high quality closed phones and achieves reference grade status. Amazingly the Prime gives you the performance levels of open headphones. The isolation is excellent and I am able to shut out outside noise in my listening room and get deeply involved with the performance.

The change from the Alpha Dog to the Alpha Prime is not subtle. The bass extension is deeper and the transparency stepped up to another level entirely. The treble is more refined and extended and the midrange ranks up there with the best of any closed headphone currently produced.

Dan’s accomplishment with this design has been an adventure for me as well as many of his devoted listeners. Dan’s genius is evident in every new design he has created and one can only imagine what will come next from this gifted designer. I have a sneaky suspicion we have not heard the last from MrSpeakers. If you’re considering closed headphones the Alpha Prime deserves serious consideration and highly recommended.