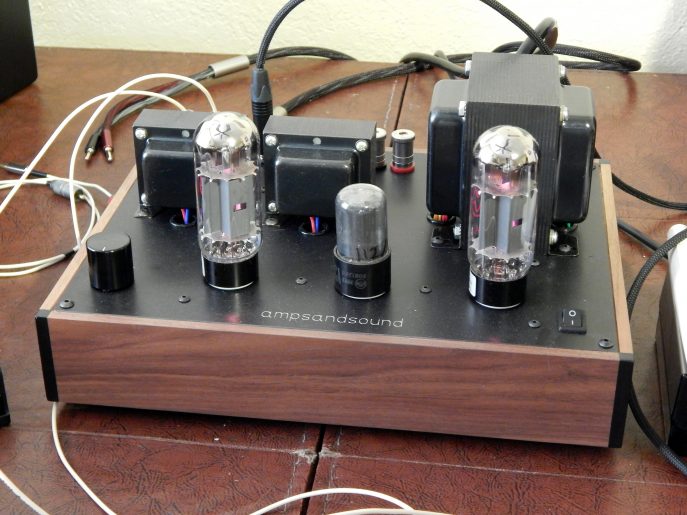 For the last thirty years I have been a staunch tube lover, but not for the reasons solid state aficionados would have you believe. The phrase I hear parroted by many personal audio buffs, which has its roots in solid state designers, is “that tubes make a distortion that is pleasing to the ear, and color the sound reducing harsh high frequencies”. It is this erroneous philosophy that has led many designers, especially in the personal audio community, to try to make solid state amplifiers that sound like tubes (usually to seriously degraded if popular sound quality), and many tube amplifier manufacturers to emphasis rather than limit the deficiencies of tubes. Contrarily, what makes a high performance tube amp sound better than an equivalent transistor amplifier is the inability of tubes to produce a specific distortion known as Transient Intermodulation Distortion (TIM or TIMD). The Tube’s relatively slow slew rate (which makes it unable to reproduce TIM) can also roll off the high frequencies in a poorly designed tube amp and this along with tube amps having generally higher measured THD (Total Harmonic Distortion which is significantly less audible than TIM) has brought about the above myth. TIM is what gives solid state gear that slightly metallic or harsh sound in the high frequencies which tends to obscure micro-detail, and it is this micro-detail that give tube amps their expansive and airy sound stages.

The holy grail of Tube amps is the Single Stage Single Ended Class A Triode. The drawback of this configuration is fairly low power output levels (generally less than 10 Watts), which severely limits loudspeaker selection (primarily to horn loaded designs). While 3 Watts may be a sub-optimal for loudspeakers it is more than enough for headphones making the Single Ended Triode perfect for personal audio.

Justin Weber of ampsandsound is an old school tube designer who believes in best practices manufacturing (IE: he employs classic designs, with the highest quality components and hand crafting). Rather than coloring and blurring the sound to make a “tuby” sounding product they “strive for a neutral, non-fatiguing sound, and demand that all our [sic] products be ultra-quiet in operation.” In pursuit of this, ampsandsound realizes that one of the most critical components in a tube amp is the output transformer, which they have custom hand wound by Transcendar for extreme bandwidth and linearity.

One of their newest offerings is the Mogwai, designed with an 8 ohm tap for use with loudspeakers and a 32 ohm tap for use with headphones. Counting on different tube configurations to offer subtle changes in presentation, the Mogwai’s auto biasing is designed to accommodate a large range of tubes including; 6L6GC, EL34s, KT66, KT77, KT88, 6550s and KT90s. The one I have is fitted with JJ Electronic 6CA7s, and Justin even offered to retrofit it for the 802 (a personal favorite).

For the purposes of this review, Justin sent along a pair of Zu Cubes so that I could evaluate the speaker outputs. To this end, I set up the Mogwai and the Zu Cubes in my living room. After quite a bit of tweaking, I was able to arrive at a configuration for the Cubes (against the far wall, slightly off axis) that provided a reasonable soundstage. Using the Questyle QP1 as a digital source I listened to several of my standard test tracks and determined fairly quickly that not only could the Mogwai drive high efficiency speakers, but make them sing. But alas the Zu Cubes are not the speaker for me and even the Mogwai’s warmth and mystical midrange could not make them something I wanted to listen to. As an experiment, I connected my audio speakers to the Mogwai, and though the sound was heavenly, three watts was simply not enough power for them even in a near field configuration.

It was time to switch to headphones. My initial listening tests using the QP1 as DAC involved the MrSpeakers ETHER C Flow headphones and the HiFiMan HE-1000 headphones. While the two headphones have a slightly different sonic signature, both are extremely fast and detailed and were well served by airy resolution of the Mogwai. The tonal balance of the Mogwai is very linear with a slight uptick in the high frequencies and exceptionally deep and fast bass (which is frankly unusual for tube headphone amps) as was evidenced by “Can-Utility and the Coastliners” (Genesis Foxtrot 16/44.1). Michael Rutherford’s bass pedal enhanced sub-sonic bass notes were rendered with great authority without appearing boomy while the percussion expertly punctuated by Phil Collins was crisp and well defined. In contrast the Mogwai’s honeyed midrange wrung every bit of emotion from Peter Gabriel’s heart rending vocals.

The soundstage was open, wide and deep with live tracks like Peter, Paul and Mary’s cover of “Blowin’ in the Wind” (In Concert DSD) presented with a true sense of theater. The musicality of the voices executed with spine chilling passion and a pinpoint imaging that creates an engaging and joyful realism.

As part of my review of the Noble Katana IEMs I connected my turntable and Audible Illusions preamp to the Mogwai, the results were transcendental. Johnny Winter tugged at my heartstrings with the sentimental melancholy of his blues guitar artistry (Still Alive and Well – Columbia USA – SQ).

The higher resolution of a true analog source brought out the best in the Mogwai, enhancing everything that was magical about the tube amp. Listening to “A Cold Old Worried Lady” by Triumvirat (Old Loves Die Hard – EMI Japan) the piano was deep and rich placing the Steinway Grand in a great hall accompanied by the silky despondent vocalizations of Barry Palmer.

Not only did the ETHER C Flows and the Katanas prefer vinyl transliteration, the Zu Cubes also enjoyed the benefits, becoming a little more emotional and a little less abrasive.

Since the majority of readers will be listening to digital, and since a world class amplifier deserves a world class DAC I moved the Mogwai into my office to connect it to the Questyle CAS192D True DSD/Current Mode Amplification DAC.

You have probably have noted from earlier articles that I use Classical Music to determine the accuracy and fidelity of any given piece of audio gear, in specific Igor Stravinsky’s “The Firebird Suite” (and in this case Reference Recordings Eiji Oue conducting the Minnesota Orchestra – DSD). So how did it sound, you ask, have you ever been to the Hollywood Bowl? Or the Walt Disney Concert Hall? That’s what it was like. Dynamic, articulate, with a strong feel of the room, the musicians placed as individuals adding to a cohesive sound. Each instrument imbued with its own unique characteristics, the oboe, the flute, the French horn, plucked violas and cellos, the crash of the tympanis and kettle drums, the ring of triangles, violins singing in unison, as well as the blare of the brass section.

As a pianist, the one instrument that brings it home for me is the piano, so I put on Billy Joel (“Piano Man” Piano Man – DSD). While the Mogwai’s true strength is the human voice, lovingly portraying the soul of Billy’s singing, the piano reverberates with deep chest and spritely sopranos in a large music hall, yet refuses to obscure the harmonica, according and mandolin.

Bryan Ferry’s crooning baritone sparked its own form of ecstasy as he sang “Out of the Blue” against a cacophony of virtuosic melodies (Country Life Roxy Music – DSD) taking full advantage of the 6CA7s. As did a crooner of a different era, Dean Martin belting out “Everybody Loves Somebody” (Dino: The Essential Dean Martin – 16/44.1) to a backdrop of lavish strings, piano and guitar.

Since I hadn’t as yet been able to truly enjoy the Mogwai in its role as a loudspeaker power amp, as a last performance test, I connected it to my home theater speakers which are about fifty years old and date back to a time when 25 Watts was a large amp. Finally, audio bliss had been achieved. Everything I had heard with the headphones was reinforced through the speakers, with the added benefit of floor shaking bass (when appropriate) and a completely three dimensional sound stage. While I’m used to normally feeding literally ten times as much power to my home theater speakers, there was no lack in dynamics or bottom end. A sampling of Liz Phair’s “Polyester Bride” (whitechocolatespaceegg – 16/44.1) confirmed that the satin luster midrange was also there in spades.

The Mogwai is a clear indication of why ampsandsound is one of the most respected tube amp manufacturers. It is incredibly versatile, with more than enough power to drive any headphone. I listened to the MrSpeakers ETHER C Flows, the HiFiMan HE-1000s, the Noble Katanas, even the Wolfson Digital Silence IEMs and none were not enriched by the sweetness of the Mogwai’s mellifluous midrange, with the caveat that 1.8 Watts is way too much power for extremely sensitive IEMs (if you listen primarily to IEMs, I would recommend the Leeloo which has about half the power of the Mogwai). And with careful speaker selection, the Mogwai can perform sorcery with loudspeakers also.

To recap, the Mogwai is exceedingly linear, with a fast deep bass extension that you just don’t expect out of a tube amp, yet it retains all the air, resolution, detail and musicality one demands from an audiophile quality single ended triode.