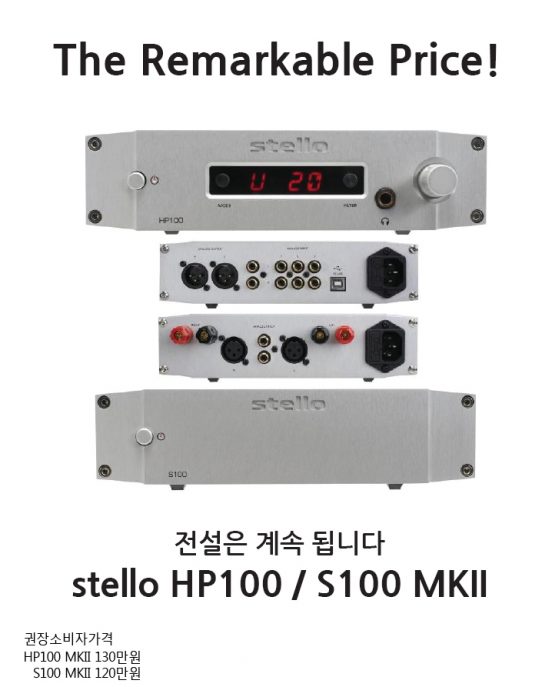 April Music has been manufacturing products since 1998 in Seoul Korea. The company prides itself on building high quality high-end audio components. The Stello lineup got its initial start in personal audio with the well-received headphone amplifier, the HP 100. The company also has two other brands they manufacture; the Aura line of digital products, which includes a world-class top loading CD player, and the Eximus line of power amplifiers. The company also does OEM work for many high-end companies.

Drew Baird from Moon Audio called me and asked me if I would be interested in reviewing the Stello stack as a system review. Drew told me that the performance of the system was exceptional and sounded fantastic. Looking forward to listening to the Stello products, I enthusiastically accepted the invitation. The system he sent included a preamp/headphone amplifier, a power amp and a separate digital to analogue converter which employed a field programmable gate array designed from the ground up. The build quality of the stack was extraordinary.

Setup was a breeze, I installed the Stello units into my main system with the Fritz Carbon 7 monitors and Nordost Blue Heaven cables. I pushed the play button and right out of the box the components were making music and sounded great. After 100 hours of burn, I noticed the sound was even more dynamic.

April Music describes the preamplifier as an entry into high-end audio. The combination preamp and headphone amplifier has a exclusively designed toroidal transformer. Ales Rasmussen, who also designed the Eximis amplifier, designed the chassis. The amplifier section for headphone listening is pure class A. The push pull circuitry uses JFET transistors in the input section of the amplifier and is designed for low noise. A Bipolar transistor design is used in the headphone output section and provides excellent sound with magnificent dynamics. The system has both balanced and single ended inputs and boasts fully discrete circuitry.

The S 100 MK II is designed to work with the HP 100 MK II preamplifier. The amplifier is a Class A/B push pull design that delivers 50Watts of power at 8 ohms, powerful enough to drive most any bookshelf or floor standing speaker. The sound is tuned by April Music for ultimate transparency and clarity. On the rear of the amplifier are balanced or single ended preamplifier inputs and five way binding posts for output accommodating both banana and spade connections. The chassis is similar in design to the preamplifier. Only a single set of speaker outputs is provided. The power transformer features an internally proprietary toroid design specifically designed by April Music. The amplifier has a powerful dynamic sound delivering clean robust power.

The Stello DA 100 Mk II is field programmable gate array unit that has impressive specifications. The digital inputs include 1 USB 2.0, 1 Coax, 2 Optical and 1 AES/EBU input for most every application. The unit can upsample 44.1 kHz up to 384 kHz. The converter also decodes DSD 64 and DSD 128. The analog outputs are designed to handle both single ended and balanced devices.

Designers carefully choose parts through relentless hours of listening to each component before they come to the final selection for their designs. Many people like to mix and match components in their home audio systems, but in my experience there is an advantage to using components from the same manufacturer, as each company usually has an individual house sound designed into their products, so matching components more often than not are extremely synergistic. April Music has been manufacturing gear for many other companies, serving as a OEM. Their reputation for building reliable and extraordinary products in the personal audio community started with their original preamp/headphone amp, the Stello H100. Built in South Korea the product garnered a reputation as a well designed unit, that worked well with all personal audio gear, at a reasonable price.

The Preamplifier/Headphone Amplifier HP 100 MK IIwas a terrific little engine driving an effortless and powerful S 100 MK II. The stats may be slightly understated as driving 50 watts into 8 ohm as the amplifier felt much more powerful than the stated specifications (a good thing). The Fritz Carbon 7 monitors are an nominal 8 ohm load with a rated sensitivity of 88 dB and the S 100 MK II was an excellent and synergistic match for the speakers.

Listening to various recording’s digitally, the Stello system impressed me with its quality of sound and musicality. Impressive was the total delivery of the music and the control and synergy the Fritz Carbon 7($2500) monitors was stellar. There was excellent detail retrieval from the music. Listening to vocal and jazz recordings the system had crystal clear transparency and a sound that competed with systems costing many thousands more. The Stello had exceptional dynamics and the system had no audible distortion. Chesky’s binaural recording “Down Home Blues” by Noah Wall had a live in the studio feeling. Listening to her articulate the lyrics on “Nobody’s Fault but mine” had the bluesy guitar to the left with Noah in the middle of the soundstage. The space and air was exceptional. The Stello system was able to recreate a realistic soundstage with exceptional imaging. Missing from the performance was any harshness or any grunge.

The sound the Stello was producing did not make me miss the warmth of tubes from my reference amp, the VPI229D, it was never cold or sterile and the music just flowed sounding like real music. The Fritz Carbon 7 is an exceptional speaker at detail retrieval and the Stello was able to extract the best performance out the recordings that were used in my audition. Chesky’s recordings have a reputation for being some of the best in the industry and the Stello system delivered excellent room ambience and let the music come alive.

Bria Skonberg’s excellent new album “Bria” really showcases her incredible vocal range and trumpet playing. On the track “Don’t be that Way” her vocal was articulate and sultry. The sound of the lyrics once again were transparent and alive. The Stello operating on all cylinders was able to create each individual in the band in their own space with air and transparency rarely found in products priced this reasonably. The dynamic sound of the band playing in unison had exceptional dynamics. The tonality of each instrument was accurate and sounded alive.

Switching to the electronic genre with Aphex Twin’s “Syro” gave me a good feel for bass. The track “Minipops 67” has excellent bass lines and the Stello system delivered deep thunderous bass with excellent extension and texture. The system was producing music and missing was any noise or distortion. The sound the DAC was putting out was well above the $1750 retail price. The sound was transparent and alive and balanced. Switching to headphone listening with the Ether C and playing Copland’s “Fanfare” showcased a well designed headphone amplifier. Using the Ether C single ended with the Nordost Blue Heaven Cable the Stello HP100MK 11 delivered big time. The sound was transparent and had excellent speed. The preamp/headphone amp combo cost $1300 and was reproducing this track with speed and dynamics that most products in this price range fail to deliver. The soundstage was wide and deep with excellent spacing and definition. The torture track is demanding and the Stello delivered with dynamics and speed and sailed through the torturous tympani whacks in a believable and exciting performance.

The Sennheiser HD800S had excellent staging on “Appalachian Spring” from the same recording. The orchestra was laid out in a 3D stage. The spacing and air was exceptional on this track. The sound was stellar and the HP 100 MK II had the entire orchestra layered in sections I could visualize with space and air between the orchestra. Nothing sounded artificial in the presentation of the music. The sound was again fast, articulate and explosive.

The Audeze LCD 3 was more of the same playing Springsteen’s “Badland” from “Darkness on the Edge of Town”. I had my eyes closed and my body grooving to the explosive E Street Band. The sound was fast and dynamic. My body kept moving to the sound of the music and the HP 100 MK II once again delivered the music and never called attention to anything but the music.

Using Audirvana I was able to access my DSD recordings and Patricia Barber’s “Modern Cool” recording sounded stellar. “Company” once again highlighted the sound of DSD at its finest. The sound coming from the DA 100 MK II was musical and the range was exceptional on this recording. The bass lines were well extended and the sound once again was dynamic and delivered thunderous bass with exceptional transparency. I never felt like anything was missing while listening to this track.

April Music products are built to high specifications. The quality is evident in both the build and sound of their products. The sound never disappointed and the system combination provided hours of musical enjoyment.The cost of the Stello components is an exceptional value. The cost of the three Stello components totaled $4250 and the Fritz Carbon 7 monitors added another $2500. The system cost is $6700 without headphones or quality cables. The sound coming from the system was extraordinary with outstanding tonality and offered exceptional musicality. The exceptionally transparent sound always kept me involved with the music.

The preamp/ headphone amp drove every headphone with finesse and musicality and the DAC delivered on any type of digital recording with exceptional transparency and made all recordings come to life. The FPGA design is not limited in reproducing digital files, whether I was playing lossless or DSD files, the system always delivered a top tier performance and had me involved with the music. People looking for a three-piece system to drive speakers and headphones should demo the Stello system as its remarkable performance and build quality omitted nothing in top tier performance. The exceptional transparency highlighted by a pristine treble with thunderous bass made listening sessions a musical wonderland.

The Stello checked off all the boxes I look for in recommending an exceptional product. The build quality and sound provided with this system had me involved with the music. Never did I feel I missed anything or wanted more out of the music. The Stello system is a well engineered and beautifully built system that will fill the needs for anyone looking for that complete two channel system . Whether your room is small or large the Stello will bring a smile to your face and gets a big thumbs up for exceptional dynamics and tonality. Highly recommended.