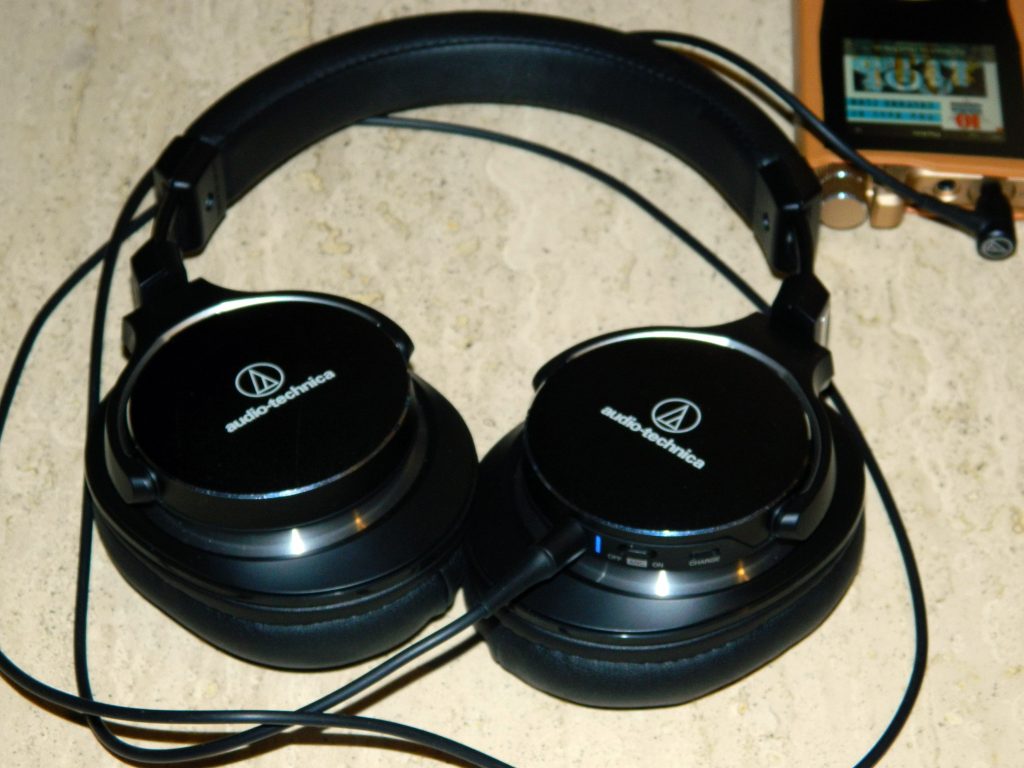 Audio-Technica is a long time established Japanese phono cartridge company who moved into pro audio in the mid 70s manufacturing headphones and microphones. In fact, I have used an Audio-Technica microphone in the studio for over 30 years and they came to my attention through Telarc Records who used Audio-Technica microphones at that time. The ATH-MSR7NC is the top over-ear model of their SonicPro series of headphones. The SonicPro series headphones are designed for discerning listeners with an ear towards the pro audio sound. What sets the ATH-MSR7NC apart from the standard ATH-MSR7 is active noise cancelling. To quote Audio-Technica on the ATH-MSR7NC, “These headphones are outfitted with exclusive 45 mm True Motion Drivers to deliver distortion-free audio reproduction with extended frequency response. A miniature microphone is incorporated into the top of each earcup to pick up ambient noise that can then be blocked by an appropriate sound-cancelling signal when the active noise-cancelling function is activated. Having the microphone on the top, instead of on the side, of the housing ensures consistent noise cancellation unaffected by the user’s head movement or by wind noise. Each earcup also has an acoustic vent, ideally positioned on the side of the housing, 90 degrees from mic, to enhance tuning without negatively affecting sound quality. The result is consistent Hi-Res Audio reproduction whether in active or passive noise-cancelling modes.” The ATH-MSR7NC is also fully HRA (Hi-Res Audio) compliant, sporting a frequency response to 40 kHz.

For user convenience and to optimize sound quality Audio-Technica provides a separate detachable cable with microphone and smartphone controls for use with a phone and a standard 3.5mm cable for use with other devices, as well as an airline adapter and carrying pouch. The noise cancelling is powered by a lithium polymer battery, charged via a provided USB cable (power adapter not provided) for a 30-hour continuous playback time.

Though the ATH-MSR7NC is equipped for use with a smartphone, I would recommend sticking with a high quality DAP for the preponderance of your listening, as they are not kind to or forgiving of low resolution sources or media. For the majority of my time with the ATH-MSR7NC, I used the Questyle QP1 DAP (I like to spend a couple of days auditioning a product, to get an overall sense of it, before doing any critical listening), however for the final testing I used the Questyle CAS192 DAC and Questyle CMA 800R Current Mode Headphone Amplifier to ensure fair treatment. After some initial A-B tests, to determine how much effect it has on the sonic quality, I used the noise cancelling for the remainder of the review.

Sensing that the ATH-MSR7NC would shine best with live music, I began with Jimi Hendrix’s “Izabella” from Woodstock II. They gave a very live front row sound stage with excellent dynamics. The bass guitar was upfront and beefy, with the drums a bit in the back. The tonal balance with orchestral music was in keeping with other offerings in the ATH-MSR7NCs price range, a little emphasis in the lower mid bass, and a bit brassy in the upper mids. Moving on to “Killer Klowns from Outer Space” by the Dickies, the ATH-MSR7NC showed that even studio recordings could sound live with the right treatment. The razor edged guitar licks were produced with a mosh pit fire, while the frantic vocals of Leonard Graves Phillips sit center stage between your eyes. The reverberating electronic organ from Phillip Glass’ “Koyaanisqatsi” brought to mind that the ATH-MSR7NC would be a good choice for use with movies or television, giving a very dynamic and theatrical presentation.

Switching to Seu Jorge’s performance of “Life on Mars?” you can clearly hear the plucking of the strings of the guitar, while the rich bassy vocals exhibit that right amount of resonance. It is clear that the ATH-MSR7NC handled single instrument recordings well with a studio quality sound.  I verified this with “Eleanor Rigby” as interpreted by Stanley Jordan. Stanley’s two handed technique is rendered intimately with a next to the amplifier dynamics and feel.

I finished my session with the ATH-MSR7NC listening to “Little Wing” from Jimi Hendrix Experience’s Axis: Bold as Love. Again the presentation was alive, with a bold, concert front row edge, possibly the most enjoyable headphone experience of that track I’ve had to date.

The active noise cancellation built into the Audio-Technica ATH-MSR7NC is second to none that I have heard. While not as effective at blocking outside noise as one would expect from a closed back headphone, this can be an advantage in many of the environments for which it intended for use, such as on an airplane, where one wishes remove the sounds of the aircraft by would probably want to be able to hear the flight attendant or pilot announcements. The dynamics and larger than life presentation of the Audio-Technica ATH-MSR7NC make it an ideal choice for in flight movies or binge watching of your favorite TV shows on your smartphone. As one would expect from a headphone with pro audio influence, the Audio-Technica ATH-MSR7NC is a great rock and roll headphone that also performs well with all types of music. The active noise cancelling and modest price makes it a prime choice for the active “head banger” on the road.

***Unless otherwise noted, specifications measured with headphones in active mode.