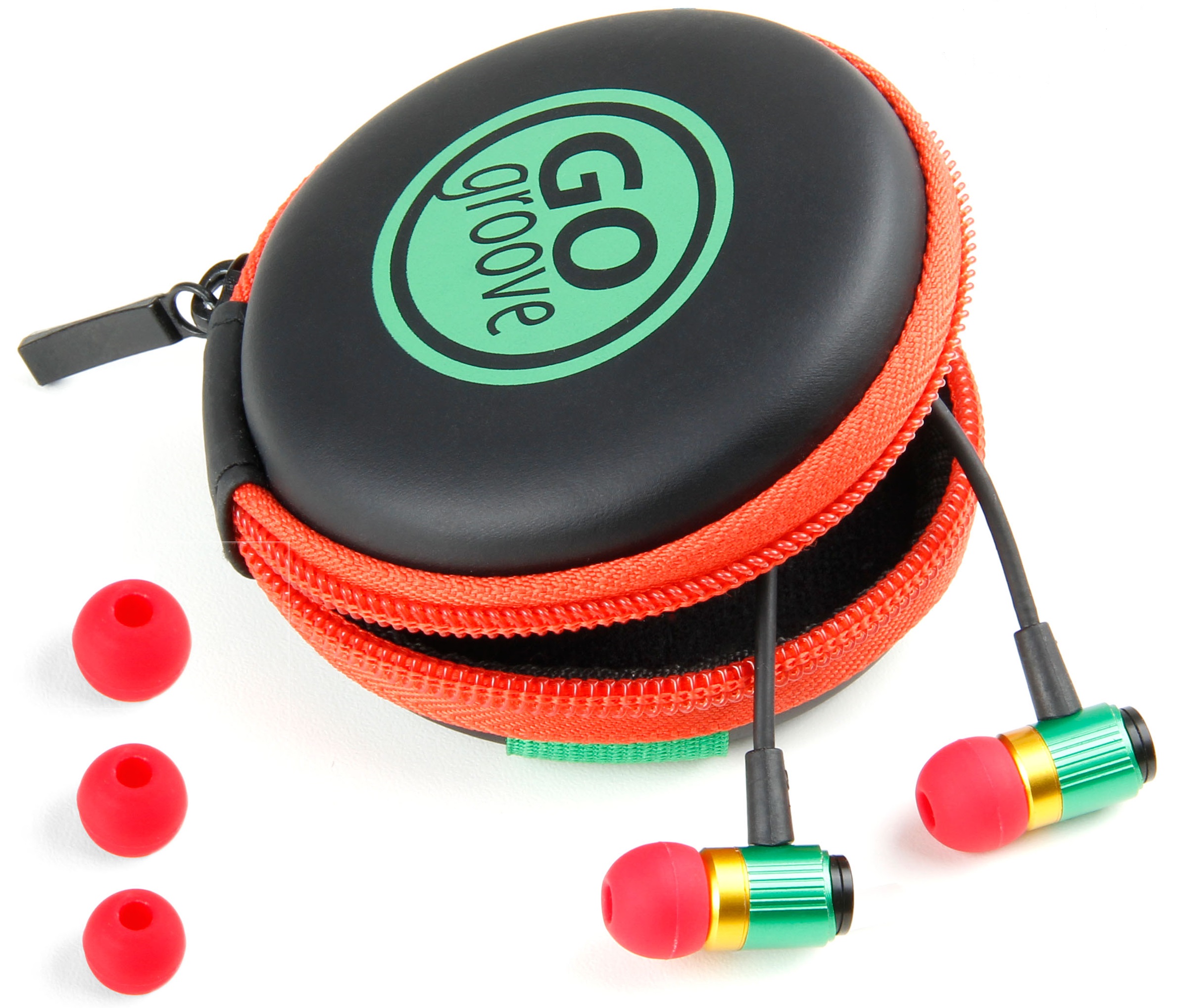 The $34.99 AudiOHM RNF are made by GoGroove, a longtime industry maker of in-ear headphone. They make an assortment of fairly popular units like sport, portable and Bluetooth headphones. The company also makes digital audio players, audio streamers and speakers which promote the brand as being fairly invested in audio. The RNF in-ear monitors that I have are their newest product designed to smash the competition with its industrial ruggedness.

Upon unboxing the product, we were met with an extremely durable case, multiple tips, and the units themselves as the main components. What really impressed me was the quality of the box and case. The retail packaging features a second flap with a detailed description of the unit. The carrying case itself is also leagues ahead of what most companies give you to protect the unit. Mine was tactical green and sturdy.  All the main connection points have silicone injected into the connectors to keep the joints strong. It’s almost like an epoxy or glue to keep the unit from splitting apart internally as this is an issue that plagues a lot of cheaper units. There is practically no ability to twist the cable thanks to its fortified Y connector.

The audio cable on the RNF is extremely heavy and smooth yet lacks flexibility. I am impressed by how rugged they made the cables from a technical perspective, but the much too thick in this case from a practical standpoint difficult to use. I am unable to get it to retain any shape without force keeping it together (such as in a case).This problem heavily affects the general utility of the in-ear headphone. The drivers themselves are lightweight in comparison to the rest of the unit, which means that the weight of the cable and connectors affect the fit of the unit. The stiff cable constantly moves the positioning of the unit.  It is nearly impossible for me to walk with them in my ears and expect a constant fit. The cables are also a pain to deal with as they don’t bend to how you may want to use them.

While I am a fan of GoGroove’s marketing proposition of giving lifetime warranty and extremely durable materials to headphones, I find that they need to work on this concept a bit more. It’s still incomplete in the realization of the goal due to the units being overbuilt and of poor quality.

The AudiOHM RNF headphones were reviewed with a Project-H DAC/Amp unit featuring a Cirrus Logic CS4398 DAC and an in-built Objective 2 with Burr Brown op amps. The headphone does not need additional amplification past what a cell produces and does not warrant the purchase of a new DAC, it can be used natively with what you have on hand. The low-cost IEM unit can be driven with no detectable noise on any phone or DAP I used it on.

The general sound signature of the RNFs  leans toward being neutral yet I found a hint towards more cold and analytical than warm sounding. The unit doesn’t take a step towards either direction and  chooses to lean  more towards the middle ground in sound. This is not to say it is accurate.  It isn’t, but, its tonality is fairly balanced without an over production of color or lack thereof. The unit is  fairly laid back with compressed and limited dynamic range.

The RNFs sport a fairly mellow mid range. Vocals are produced with above standard accuracy in the frequencies they hit, but lack in natural emotion. Listening to “No Surprise” on the album “Leave This Town” by Daughtry was a testament to the RNFs abilities. The vocals were hitting the right notes and had good separation from the background instruments. There was a slight colorful timbre to the mid-section of the vocal spectrum that spices the vocals up a tad bit. They struck a delicate balance between  overly thick and overly thin mid range, but fortunately it finds its own voice taking the middle ground.

Classical and country music with good separation are the top performers of this headphone. Whereas the RNFs get a bit hard to listen to with modern mixes and insanely layered auditory components, they perform amicably with genres of the past and those that are well recorded. Pachelbel’s “Canon in D Major” was produced accurate and left me surprised. The headphones were still not in the range of active listening or production, but they did a dang fine job of attempting to take the lead stage with the production of this timeless classic. The instruments blended together very well with the string instruments being clearly identifiable. The highs were not as extended as I would like, but for a unit of this low price I was not exactly disappointed. This in-ear headphone won’t fair well with electronic music, but it work for most genres. The bass takes a role as a wingman and really completes the song.

The disappointment in the RNFs come with an effect that affects most units of this price range; it’s the cardboard effect. This is defined by a heavy compression of the dynamic range of a song. Not through any computerized means but in that it is not able to produce as wide a range as possible. This gives it an almost stale and flat sound to many, so hence the ‘cardboard effect’. This made the majority of modern pop, EDM, and rock hard to listen to. The luster just wasn’t there with them. The units were only able to perform well in classical music and well produced tracks due to the lesser amount of complex auditory layers and ‘things happening’ in the songs. But past that, the cardboard effect has a huge grasp on the overall sonic production of the unit.

Overall, the AudiOHM RNFs by GoGroove prove themselves to be a fair product at $34.99. They are held down a bit by the overbuilt cable, lack of utility, and dynamic range production, but still define themselves as a good choice in this price range. They feature above average sound quality for the range and are comparable to other units while still packing a lifetime warranty and extreme durability. People that constantly break their headphones should check out the RNF.