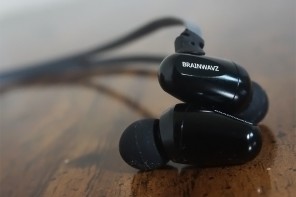 Brainwavz is a Chinese-based company who, over the last few years, have been making waves in the entry-level of personal audio gear. They have quite a few products on the market ranging from their entry level Brainwavz Delta ($22.50 USD) to their current top tier IEM, the Brainwavz S5 ($99.50 USD).

The Brainwavz S5 is a 16ohm, single 10mm Dynamic driver IEM with a sensitivity rating of 110dB at 1mW. When you buy the the S5 you will receive: One pair of ComplyT-400 medium foam tips, six Pairs of silicone tips (S/M/L), one pair Bi-Flange silicone tips, one pair Tri-Flange silicone tips, a 6.3mm audio adapter, one black and red Brainwavz Hard carrying case, and one instruction manual & warranty card. Overall, the accessories provided by Brainwavz are excellent and the amount of tips provided guarantee that their consumers should never have issues related to fit.

The housing of the S5 are a black metallic casing with an angled bore and a small pinhole on the side of each housing. The finish of the housings themselves is excellent with no signs of defects, sub standard gluing processes, or obtrusive loose fit between housing components. In short, the housings are clean, tidy, sleek, and have the appearance of an IEM beyond its price bracket. When holding the IEM, the housings, due to their metal construction, may seem a tad on the heavy side but it wasn’t an issue for me due to the S5’s above average fit. The angled bore and the shape of the housings are very well thought out and will aid is guaranteeing an excellent fit for most consumers. Although the fit was excellent, I found that due to angled bore and housing shape, the S5 was better suited to be worn as a “cable up” behind-the-ears earphone. Other consumers who own the S5 have indicated that it can also be worn cable down, so, your mileage may vary. The pinholes on the side of the housings are venting. They’re there for both better bass response – think more air movement by the dynamic driver – and to aid in better sound staging. Usually, when vented, this equates to a hit in isolation. Isolation though was quite good with the S5 and, in my opinion, was a non-issue albeit overly noisy surroundings can result in outside noise leeching in.

I would have to rate the S5 cable as decent yet I did have a couple of issues. The cable itself is a flat rubber clad cable made with high purity OFC copper wiring at its core. I’m not a huge fan of flat cables but understand why some manufacturers have chosen to go the flat cable route. Generally speaking, flat cables are known for being tangle resistant, which the S5 is, and are good for combating microphonics, which the S5 is also. The thing I particularly didn’t like about the S5s flat cable was the width. Although fit was excellent I found the width of the cable, when behind my ears, a tad on the wide side. The end result, it would sometimes flop around and interfere with my glasses. The other point of contention was the Y-split. Although I liked the beefy Y-split, I found it overly large, cumbersome, and especially heavy for wearing when jogging, fast paced walking, or working in the backyard. Because of the added size and weight the bottom end of the cable would flop around causing me a lot of unneeded aggravation. Those two points aside, the cable is saved by having an excellent neck cinch which is very tight and very firm and keeps the IEM housings and top end of the cable from moving around. The cables strain reliefs are also nice and beefy on the straight, ¼ inch, plug end and the housing end of the IEM meaning IEM life cable life should be quite good.

The following sound impressions were noted using the Ultimate Ears Reference Monitor as a benchmark. DAPs used were the iPhone5, iPod Classic, AK120, and CalyxM. Please note that the S5, due to its sensitivity, is not the type of IEM I would class as amp dependent. Therefore, acceptably good sound can be attained through your mass market DAP or run-of-the-mill phone, such as an iPhone. Source material was a mixture of 16 bit/44.1kHz and 24 bit/192kHz and 24 bit binaural recordings. Some of the albums used for evaluation: RAM by Daft Punk, Night At The Pawnshop, the Avatar Soundtrack, DJ Kicks by Kruder and Dorfmeister, Fleetwood Mac Greatest Hits, Free by Office Of Strategic Influence, Stoa by Nik Bartsch Ronin, and Up Close by Ottomar Liebert & Luna Negra.

The S5 is an excellent sounding IEM that competes well for the price. As mentioned above, the S5 isn’t a balanced armature driver but instead utilizes a 10mm dynamic driver. Very generally speaking, although dynamic drivers aren’t known for detail retrieval like a balanced armature is they are known for good sounding lifelike bass. In comparison to the mids, the S5 bass is slightly accentuated. The bass of the S5 is a full on lush and warm sounding bass with decent extension. Although lush and warm it is never overly warm and speed and detail retrieval is surprisingly good. I would have liked a little more extension in the bass but overall I would still have to rate the extension as good. Bass control, think leeching and smearing, is passably good, and leeching into the lower mids, albeit not great, is still good. Smearing, when pushed by overly fast music, the low end can sometimes fall behind and smear. Although not the hardest hitting bass I’ve heard the S5 can hit hard when the music demands it.

The mids, in comparison to the lows and highs, is laid back. Yes, the S5 is a V-shaped. Although laid back the mids, surprisingly enough sound excellent on the S5. For me, the soul of the music lives in the mids and this is where the S5 comes shining through. Detail retrieval is above par for this price bracket. Male vocals are slightly forward and sounded good. Note that decay was quite good resulting in some very good PRAT, think speed, meaning guitars sounded great on the S5. The strongest suit of the S5 mids though was tonality, everything sounded spot on realistic. Overall, I have little to nitpick over the midrange performance.

The highs, as with the lows, are slightly accentuated. When people read a review saying accentuated highs they automatically think of harsh and metallic highs. The S5s highs are anything but harsh and metallic sounding. If anything the S5s highs is smooth and resolving sounding with just the right amount of sparkle. Control in the upper frequencies is quite good meaning unwanted harshness or unwanted edginess is very minimal. The only nitpick I would have against the S5 highs is somewhere in the mid upper frequencies there seems to be a very slight spike and unevenness resulting in brass instruments and female vocals sounding very slightly off. I have to emphasise though it’s quite minimal though and unless you’re looking for it you’ll probably not notice it.

Although I would never class it a reference or audiophile earphone I would class it as a great entry-level earphone. For under $100 USD, it beats out slightly more pricier offerings in the IEM market. If you’re looking for a good sounding entry level IEM with acceptably good tonal balance, nice sounding mids, and good highs that walks the line between sparkly and smooth, you might want to stop by MP4Nation and give the S5 a closer look.