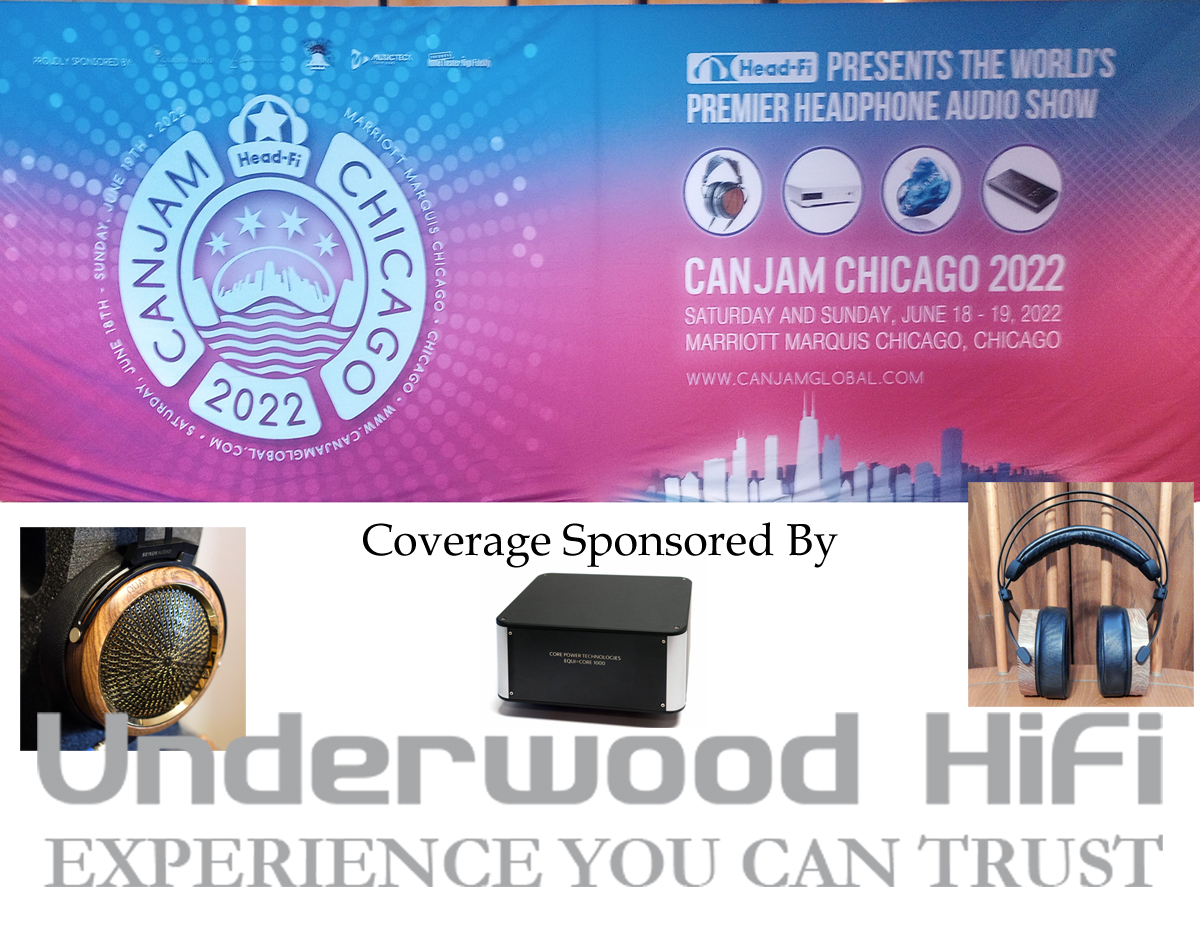 Welcome back for part 4 of our multi-part in-depth coverage of CanJam Chicago 2022 once again thanks to our good friend Walter Liederman of Underwood HiFi, https://www.underwoodhifi.com/, the best place to find high-end audio at affordable prices, for his magnanimous support in sponsoring our show coverage.

Audeze was making their usual big splash with a large booth displaying all of their amazing products with a special focus on their brand new Audeze MM-500 Headphone specifically designed for studio use and voiced by 11-time Grammy Winner Manny Marroquin their new Head of Professional Products. Of course, also available for your listening pleasure were Audeze’s two flagship headphones the Audeze LCD-5 Planar Magnetic Headphone ($4,500) and the Audeze CRBN Electrostatic Headphone ($4,500).

It’s always a pleasure to visit Dan Clark Audio who shared a room and a table with Justin Wilson of HeadAmp. Dan has been a friend since he first introduced his MrSpeakers ETHER planar magnetic headphone 7 years and 15 headphones ago, and all three of my Dan Clark headphones, the ETHER C Flow 1.1, AEON Flow Open, and ETHER2, remain to this day among my primary reference headphones. When it was released the Dan Clark VOCE became my reference as the best sounding headphone period (though I was not able to afford a pair and the necessary accompanying amplifier), then last year he released the Dan Clark Audio STEALTH Planar Magnetic Headphone ($3,999.99) which at CanJam SoCal 2021 I was able to determine was slightly superior to the VOCE in tonal balance. Well, thankfully, Dan saw that as a challenge and upgraded the VOCE ($3,299.99) for this year with a modification to the earpads that put the electrostatics again on top which is where they belong. Of course, the STEALTH remains among my favorite headphones and represents a better value as they can be used with any headphone amplifier which was evidenced by how many were used at CanJam this year. Of course, the AEON2 ($899.99) still represents one of the best values in headphones offering reference quality sound for less than $1,000 whether you prefer them in Open, Closed, or Noire.

Abyss was showing their new Abyss Diana TC Premium Audiophile Headphone ($4,495) as well as their Abyss AB1266 Phi TC Audiophile Reference Headphone ($5,995) with the spectacular dCS Lina System ($29,150) (See Frank’s review of the Lina HERE) that is comprised of three components, the dCS Lina Network Ring DAC ($12,750), the dCS Lina Master Clock ($7,300) and the dCS Lina Headphone Amplifier ($9,100), and as an added bonus both systems were sourced through the ROON Nucleus Plus Music Server ($2,559). Simply put, this was the best I have heard either headphone sound, truly wonderful.

Robb Watts the brains behind Chord Electronics Ltd. gave a seminar on the design philosophies behind the new Chord Mojo2 DAC/Headphone Amplifier ($775) to a fairly packed house. It was a real insight into the reasons that Chord products sound as they do. One of the key factors was that he looks at micro detail produced at minus 300dB far beyond the ability of the electronics to reproduce that have a residual effect on the overall sound of the DAC. I hope to be able to review the Mojo2 in the not too distant future when one becomes available.

One of the most exciting finds of the show, for me at least, was eksonic. Their eksonic DIY “Kerry Built” T2 Electrostatic Headphone Amplifier ($14,000) is based on the “Legendary” STAX SRM-T2 amplifier and the result of a DIY project started in 2009 miniaturizing and improving on the original design. All I can say is that the sound was unprecedented. Through the DIY “Kerry Built” T2 the vintage STAX SR-007 Mk I Electrostatic Earspeakers sounded dynamic with excellent tonal balance and deep bass, I thought I was listening to the new SR-X9000. It brought a whole new dimension to the Audeze CRBN Electrostatic Headphones. When Dan Clark was nice enough to bring over his Dan Clark Audio VOCE Electrostatic Headphones ($3,299.99) I was completely floored with the sound quality making this my new favorite combination. eksonic will also be building a miniaturized version of the amplifier named the eksonic aeras Elec Headphone Amplifier ($6,695) which sounded so good that despite not yet being in production Kerry sold one of the prototypes at the show. As Dan Clark noted, “There is now competition for the Blue Hawaii”.

I met Zach Mehrbach the same day in 2015 that I met Dan Clark, literally within minutes of each other, though I actually met Zach first. They were both building modified versions of the same Fostex headphone, and had I not heard the ETHER headphone the same day, I would have said those were the best sounding headphones made at that time. And both fell victim to Fostex discontinuing the driver they used and were forced to start designing and building their own drivers branching out in similar but very divergent paths. Whereas Dan focused primarily on planar magnetic drivers, Zach builds both dynamic driver and planar magnetic headphones. Zach also retained the custom aspect of his headphone designs which is why he has so many models, and there is no contesting the physical beauty of ZMF headphones. Zach has also branched out, not only producing many headphone accessories, but going as far as commissioning custom-made tube amps with the ZMF name and now distributing Cayin another excellent tube amp and personal audio manufacturer.

The highlight of the show was the new ZMF Atrium Headphone ($2,499.99), listening to the Atrium on the dCS Lina System ($29,150) as Frank Iacone noted earlier in his show report segment was the very best sound I have heard from the Lina, to die for.

The other thing that really caught my eye was the ZMF/Decware Reference OTL headphone Amplifier, simply a thing of beauty.