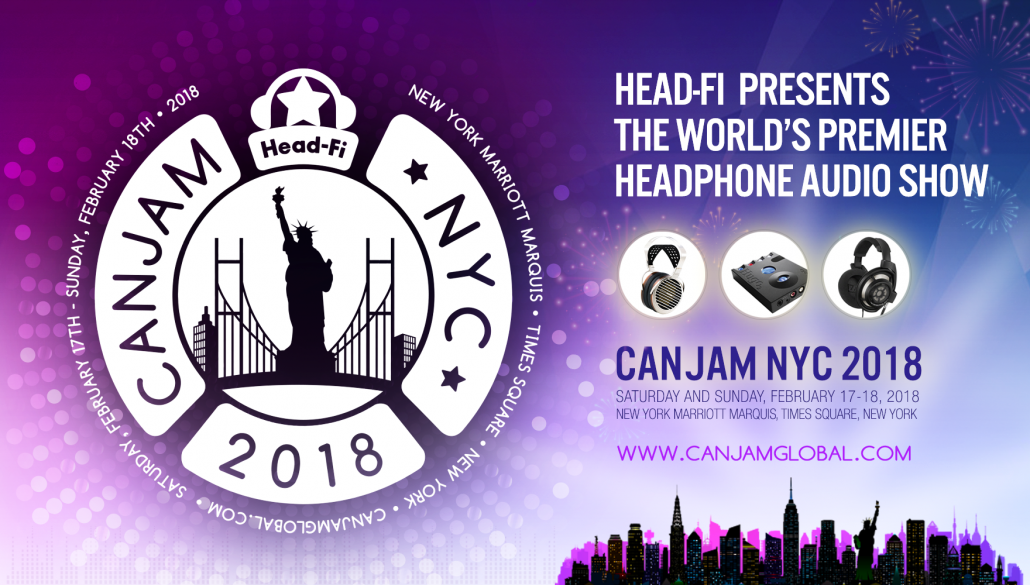 CanJam NYC 2018 was the biggest ever and I was glad to make it as it was also my first CanJam as well. Housed in the 6th floor of the New York Marriott Marquis situated right in Times Square, the location could not be more optimal. Over 2400 passionate fans gathered in there over the course of two days for a sense of festivity that could not be described by words alone. Intermittent weather and snow hit us but not a single grumpy face was seen on the show floor!

Over 80 exhibitors were there and so the Guru team involving Frank Iacone, Lee Shelly, and I split up and covered them all for you! Without further ado, here is the show report covering the exhibitors I visited.

The first company I hit up at the show was RHA and their represenative Lyndsey was kind enough to show me their MA750 ($169.95) and MA650 ($99.95) Bluetooth and IP4X water resistant headphones. They both offer 12 hours of playback and have a special feature; a magnet on the back of the driver housing keeps them sticking together!

The MA650 was made with 6063 Aluminium and had a recessed upper mid and a good thump on the lower end. The MA750 on the other hand had a much stronger and well textured sub bass element but also a more balanced sounding mid range. If you’re “all about dat bass”, then check these out.

Jack at Empire Ears gave me a demo of their Legend X (~$2300) and Phantom IEMs at the show. They feature 7 Proprietary drivers from both Knowles and Sonion, manufactured to their precise instructions. This unit’s drivers are split up into two W9 Subwoofers, 2 Mid, 1 mid-high, 1 high, and 1 super-high driver. Technology like SynX Crossovers and A.R.C were the highlights here. SynX provides a crossover for EVERY single driver in the group whereas other manufacturers only utilize one or maybe two. A.R.C (Anti-Resonance Control) on the other hand is a resonance coating applied on the inside to reduce sonic frequency resonance inside the IEM.

The Legend X provided a bassy and well textured sound thanks to its drivers and performed well in both complex instrumentals and heavy bass tests.

If there is one person at the show that came here swinging, it’s Big Misha. He sat me down at his table and immediately went into his theory and compassionate background behind his SP5 ($2000) and SP7 ($2500) SPearphones. Stereo Pravda comes with 25 years background as a distributor for portable Hi-Fi with an undeniable love for audio. He explained to me, with a glimmer in his eyes, that Stereo Pravda is a company dedicated to 100% optimality of audio as opposed to a mass universal product to suit the needs of 100% of people. If there was any man at the show dedicated to his trade with hope for the future and a genuine heart to share it to anyone willing to listen, it was Misha.

The Stereo Pravda SPearphone’s offer balanced armature drivers in a linear configuration (like a stacked spear) along with a dedicated “naked” driver to produce its sound. They featured light and vocal oriented tonality with a feathery bass response.

Darren and Kenneth of DITA sat side by side at their booth with a challenge looming before any attendee brave enough to undertake it; we were tasked with undergoing the “Twins” and choosing a final master at the end. Their new IEM twins “Fealty” and “Fidelity” (both $1,200) were presented at the table like a video game asking you to choose your side. Despite looking near identical, they were tuned differently at birth from the hands of DITA to provide listeners with the most optimal sound.

The twins come with the option of either balanced or unbalanced plugs and have some of the strongest IEM build quality I’ve seen at the show. Fealty attacked straight from the get-go with a strong bass and even beefier sub-bass response packed along a veiled vocal range. Fidelity gracefully hopped up with a more balanced low-end and strong lower-mids finishing with some nice high-range to come up as a trance champion.

Clear Tune Monitors at CanJam showed off their Da Vinci IX ($2000) Da Vinci X ($2400) with 9 drivers (4 way crossover) and 10 drivers (5 way crossover) respectively. It was the best they had to offer and they came out kicking with a estimated release date of May 2018. At first sight, I was worried that these behemoths would have trouble fitting in my ear but that worry subsided as I learned that a simple twist and they fit impeccably. Past their impressive metal build construction, I noticed that their marketing materials and booth was amongst the best constructed at the show. The materials they had to describe their products and their company showed off the pride they had in what they make and the promise they make to their “family” of users.

My friends always bemoan when I explain to them that I needed that one more headphone. Well no more, for 1More is here to join the likes of Schiit Audio and Shure in my daily vocabulary of audio company puns. No but seriously, 1More showed off a production version of their Spearhead VR headphones ($149.99) at the show and I was pleasantly surprised to learn they sounded good for music as well. The current competition for gaming headphones all make compromises in EITHER they have good 3D audio emulation, musicality, microphones, or RGB effects.

1More took all those ideas, created a list, and added one-more feature after another until the Spearhead VR was born. Voila, everything you want including a dedicated 3.5 mm pass-through, audio activated RGB light-spear, and dual ENC microphones.

Kim from InEarz Audio sat me down at their booth and provided me the warmest reception I had at the show. Genuine smiles all around, I was provided with a demonstration of their entire lineup going from the two driver S250($329), three driver P350 ($549), four driver P450 ($749),  six driver Euphoria with ADEL ($1200) and finally the  eight driver  Nirvana with ADEL ($1300). And let me tell you, ADEL technology from Asius Technologies is no joke and left me shocked at every headphone that featured their patented second eardrum technology. It’s been a few days and I still can’t find my socks that were rocked off!