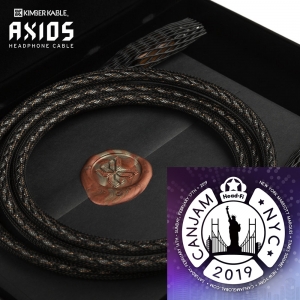 Part 5 marks the conclusion of our coverage of CanJam NYC 2019.

Sitting down with our friends at Auris, it was hard to NOT notice the behemoth that was the Euterpe($1,499) sitting on the table. The pictures make it look a LOT smaller than it actually is. This DAC/amplifier is as tall and menacing as a bookshelf speaker and definitely will steal looks from anyone in the room. The Euterpe is an integrated unit with everything you could think of: USB DAC, DSD Support, Tube Pre-amplifiers, direct RCA input to bypass DAC, stand, and integrated headphone holder as well. I found this unit to sound clean and light with good dynamics during my short demo of it at the show.

I was introduced to Joe Skubinski (Founder of Abyss) by Frank from Guru who immediately sat me down with their newest creation the DIANA Phi. With sparkles in his eyes and a light step in his feet, he gave me the run down of what makes the DIANA Phi the very best in portable headphones. The Phis incorporate the exact same planar magnetic drivers as the flagship AB-1266 Phi CC in them, which was no small feat given the size constraints. The original DIANA that came out in 2018 and was reviewed by Guru’s Peter Pialis noted it as “Simply the best portable headphones around”. Legendary audiophile Steve Guttenberg famously asserted the AB-1266 Phi CC as what he calls “the best sounding headphone…period” with the DIANA Phi coming in right behind it. The DIANA Phis also feature expanded earpads which increases comfort as well. During my brief listen to the Phi, I was blown away by the bass response. It was creamy and extremely detailed with each pulse of the music coming in like waves smashing into the side of your head. The vocals fell on the more intimate side and compared to the low-frequency, took a more backseat role. I have a smaller head so the DIANA Phi did not fully fit on me but thankfully these headphone’s and their design architecture do not require a seal of any sorts.

As a reviewer in a room with the world’s best gear, it is not common that you say the word “Wow” often these days, but the Phi did it for me. The side of every Abyss product proudly notes they are “Made in America” and I’ll have to add to that. These are “Made in Abyss”, an endless abyss of talent and prowess at their field and the drive to make it happen.  Guru will be publishing a review of the DIANA Phi in the future, please keep an eye out!

Sitting down with Tony at CanJam this year was a highlight of mine. Tony, the founder of Swan Song Audio, is a fellow engineer with a fundamental Electrical Engineering approach to designing DACs and Amps; trust the chip manufacturers and his degree. In the audiophile market, it’s most common these days for brands to go off the traditional EE approach and design their own circuitry, amplification routes, power rectification, and digital conversion and tune by ear. Tony with his array of amps and DACs at the show (many of which can be both portable and desktop) follows a ‘real-talk’ approach to design. He uses and trusts the chips coming out from the likes of Analog Devices, Wolfson, Cirrus Logic, Texas Instruments, etc and hits the books directly in referencing their diagrams, specification, and engineering documents. As Tony put it, they “know what they are doing”. Tony showed me the simply and aptly named “USB DAC” ($1200) at the show. It has no filters, delays, or any extra mumbo jumbo in it. Guru will be receiving one of these units for review so please be on the lookout for this as well.

There were a plethora of elephant IEM makers in the room and the amazing creations from JH Audio, Empire Ears, and many others are still there and sound just as good as I last heard them. However, I personally like to find the lesser known brands and see what they have to offer and qdc definitely fit the bill.

Their 10 driver Anole VX ($2300) IEMs were the stars of their booth. They sounded smooth like molasses with a balanced signature that favors the entire range and an enduring bass response as well. I prefer fun and full sounding signatures to ones that are more restrictive but offer more specific detail in certain frequencies, so the Anoles fit the bill. The sound was in-offensive and drove home the level of performance you could achieve in such a small form factor. I also tested out the 1-driver Neptune ($250 wired version, $300 wireless version) and found it to also be quite surprising, with how much of the frequency range a single balanced armature driver could achieve.

Guru’s time at CanJam NYC 2019 was a blast this year. We met many of our friends again and had the honor to meet more up and coming brands and their offerings at the show. Innovation and careful design principles, rooted in both engineering and self tuning were evident at the show and drove home the fact that headphone audio is still moving forward. It’s the countless hours each and every one of these companies present invest in their practice that allows our collective whole to go further beyond and push past even more barriers once dreamt impossible and allow for great sound to trickle down into even more affordable headphones. CanJam is the melting pot where these companies go to all come together and discuss, test, and become the collective that allows for such achievements both present and future to be realized. It’s the greatest stage for everyone to strut their stuff and both show off amongst an audience of their peers at other companies and for headphone enthusiasts to walk the floor and see the best the world has to offer.