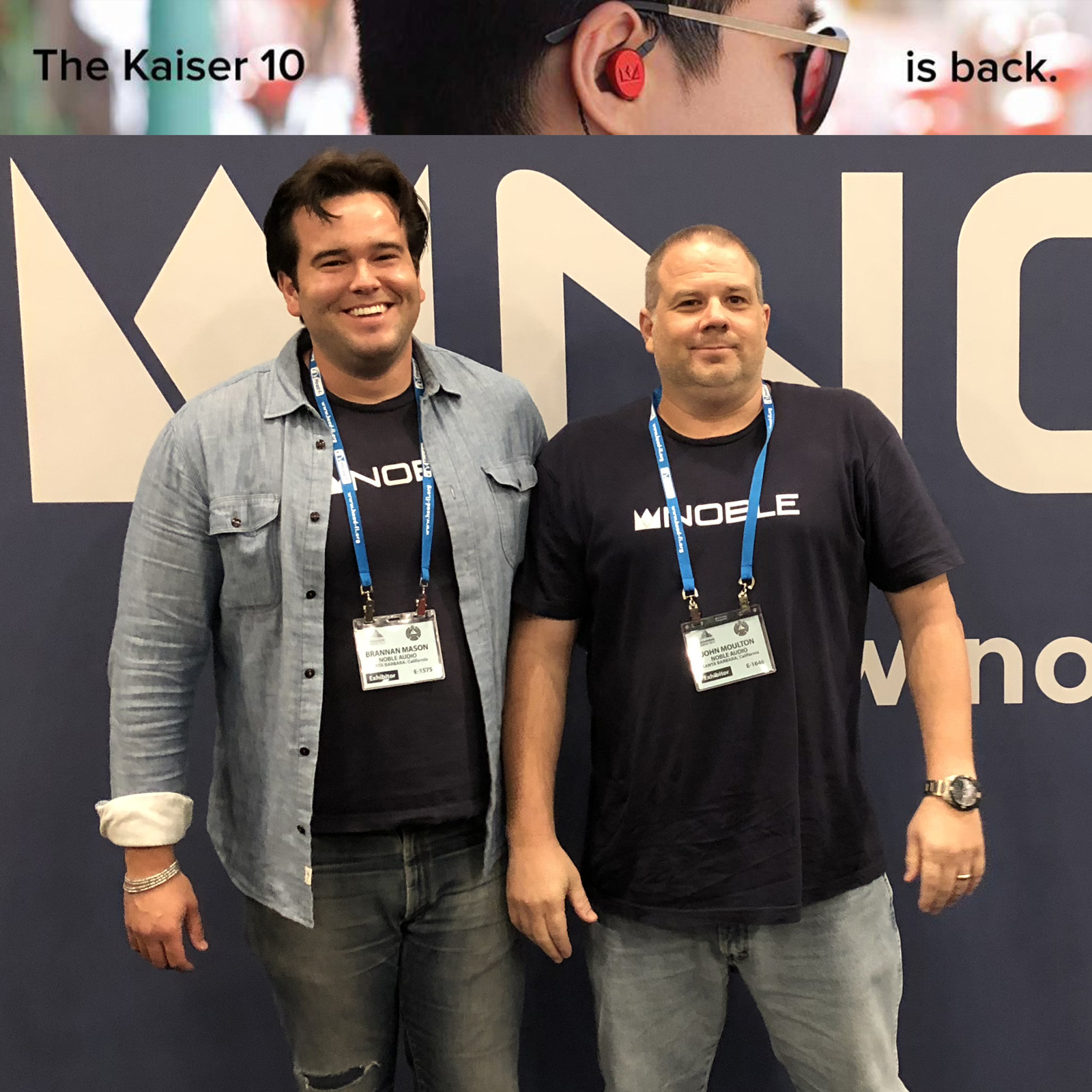 CanJam 2017 at Rocky Mountain Audio Fest was another slam dunk success. The show featured a record number of exhibitors and, as usual, a solid number of brand new products being shown. For me a singular highlight was the attendance of Dr. John (The Wizard) Moulton from Noble Audio making the trip from his home in Thailand. It was my first opportunity to meet him and we had a great conversation around the formation of Noble Audio.

Dr. Moulton is a professional Audiologist. He saw a market for high end Custom and Universal In Ear Monitors and taught himself the process of manufacturing them. He first went into business with a financial partner as Heir Audio. Their products were very successful. However, an opportunity to go out on his own and found Noble Audio presented itself, and he took advantage of that. He met Brannan Mason, now company Co-Owner when Brannan was just 16 years old. They were both living in Thailand at the time and Brannan impressed John with his maturity and self-motivation. Several years later Brannan heads their USA headquarters in Santa Barbara, Ca while John remains in Thailand. They manufacture their IEM’s and CIEM’s in the USA and Asia. They also offer a speaker, the Noble One, for two channel enthusiasts. Their Kaiser 10’s were the first flagship customs from them that I have personally owned and they are one of my personal reference CIEM’s. I received their newest flagship, the Kaiser Encore’s for review at RMAF so stay tuned! Headphone.guru would like to thank Noble Audio for their sponsorship at RMAF and CanJam!

Noble Audio was there with the full line of IEM’s from the Trident at $399 to the Django at $999 plus their twin flagship’s the Kaiser Encore and the Katana at $1,850 each. Also on display were samples of their Custom IEM Wizard design’s priced from $2099 and up depending on materials and customization.

Echobox was also in attendance showing their soon to be released Vanguard over ear headphones (Price TBD in the $349 range) as well as their new $99 Traveler IEM. In addition, they were showing the Finder at $159 w/mic controls and the $399 Nomad’s. They were also demonstrating their well-regarded Explorer Android based Digital Audio Player.

HiFiMan brought the full line of their top-rated Headphones and amps including the extraordinary Shangri-La Headphone system. Yours for the taking at $50,000 USD. My interest was drawn to the new Sundara, their soon to be released Planar Magnetic over the ear headphone coming out in the $500 USD range (Final price TBD). It should be another hit for the HiFiMan team!

Fostex always brings a full table of great sounding gear. New for CanJam at RMAF 2017 was a pair of prototypes for their new T60RP planar magnetic headphones. Each was voiced with slightly different response curves. Fostex was polling the knowledgeable CanJam crowd for their opinions and preferences between the two voicings. Suggested retail around $350 once released early in 2018. They were also showing off a Limited-Edition Emerald Green version of their flagship TH900 closed over the ear headphones. At $1,599 they looked and sounded magnificent.

Advanced is a new company at CanJam at RMAF from New York. Starting out two years ago as a Kickstarter project they were here with a full line of IEM’s as well as over the ear headphones, Bluetooth and active noise cancellation. They also had some iPhone compatible (and Apple certified) adapters to manage iPhones without a 1/8” headphone jack. This is a promising young company and bears close attention. Best of luck to the enthusiastic Advanced team!

Focal brought its full line of enthusiast and reference headphones. Their big news was the world release of their new Clear over the ear headphones coming in at $1499.00 USD. Slotted between the Elear at $999 and the Utopia’s at $3999, the Clears are an attractive silver grey and come with three different cables plus carrying case for travel. I have the Utopia’s in house and the Clears definitely provide a significant amount of listening enjoyment for a fraction of that cost.

Koss had several headphones from their venerable lineup starting with the Porta Pros at $49.99 USD. Michael Koss showed me some new highly resolving Gaming headphones just being released at $60 each. Their skunk works does have an intriguing project underway suggesting an open and closed audiophile headphone not too far off. Stay tuned!

Peter from Headamp brought the full line of exceptional headphone amplifiers including the Blue Hawaii tube based electrostatic amp $5700 and up with options and the GS-X Mk2 solid state amp at $2999 and up with options. Their big news was a new $499 Gilmore Lite Mk2 Class-A desktop amp that is small in size but strong in power. I expect this little brother of the GS-X Mk2 to be a big seller.

Klipsch was there with their new flagship headphone the HP-3 available in three wood choices and colors. The Dynamic driver HP-3 offered great well controlled bass, as well as, outstanding fit and finish. The natural wood was finished to perfection and the leather pads were very comfortable. At $1199 USD, they are going to compete strongly for flagship status in many collections.

JH Audio brought the crew from Florida and California to show off their world class lineup of Custom and Universal IEM’s. The popular products at the booth while I was there were the Flagship Layla’s at $2725 USD and the newest member of the Siren line, the Lola’s at $1745 USD. The Lola’s feature a BA and dynamic hybrid design. What is unique for the Lola is the Dynamic driver is for the Mid-Range not the bass. It delivers with sweet mids that really engage the listener. The Layla’s have been one of my reference IEM’s. The other big news from JH Audio was the customization options available to customers. The artisans at JH Audio can do amazing work. Just bring your imagination. I may have to pick up a pair of Lola’s. They are that good.

Finally, for my coverage was Chord. The high end digital wizards from the UK brought their Mojo and Poly units. The Mojo ($529 USD) utilizing Rob Watts filter tap FPGA technology and the Poly ($629 USD) offering streaming and wireless functionality when attached to the Mojo. They can be bought together and they even offer a case which fits both units into one transportable device. Also on hand was the new Hugo 2 ($2379 USD) portable DAC. Refined from the original award-winning Hugo the 2 offers twice the filtering taps and easier connectivity. Many people use the Hugo for both home and portable use. Chord had the DAVE flagship DAC ($10,588) on hand with their Blu reference CD transport ($12,000 USD) paired up to create a state of the art digital system. Regardless of the bits you have this combo will process them and deliver them up to sonic glory!

As usual the CanJam team put on a great show and attendance was strong and steady through the event. I spoke to many first-time participants (Both vendors and attendees) and all were glad they came. The innovation we have seen in the personal audio world for the last several years continues with more strong ideas and offerings. It is a good time to be a personal audio fan!