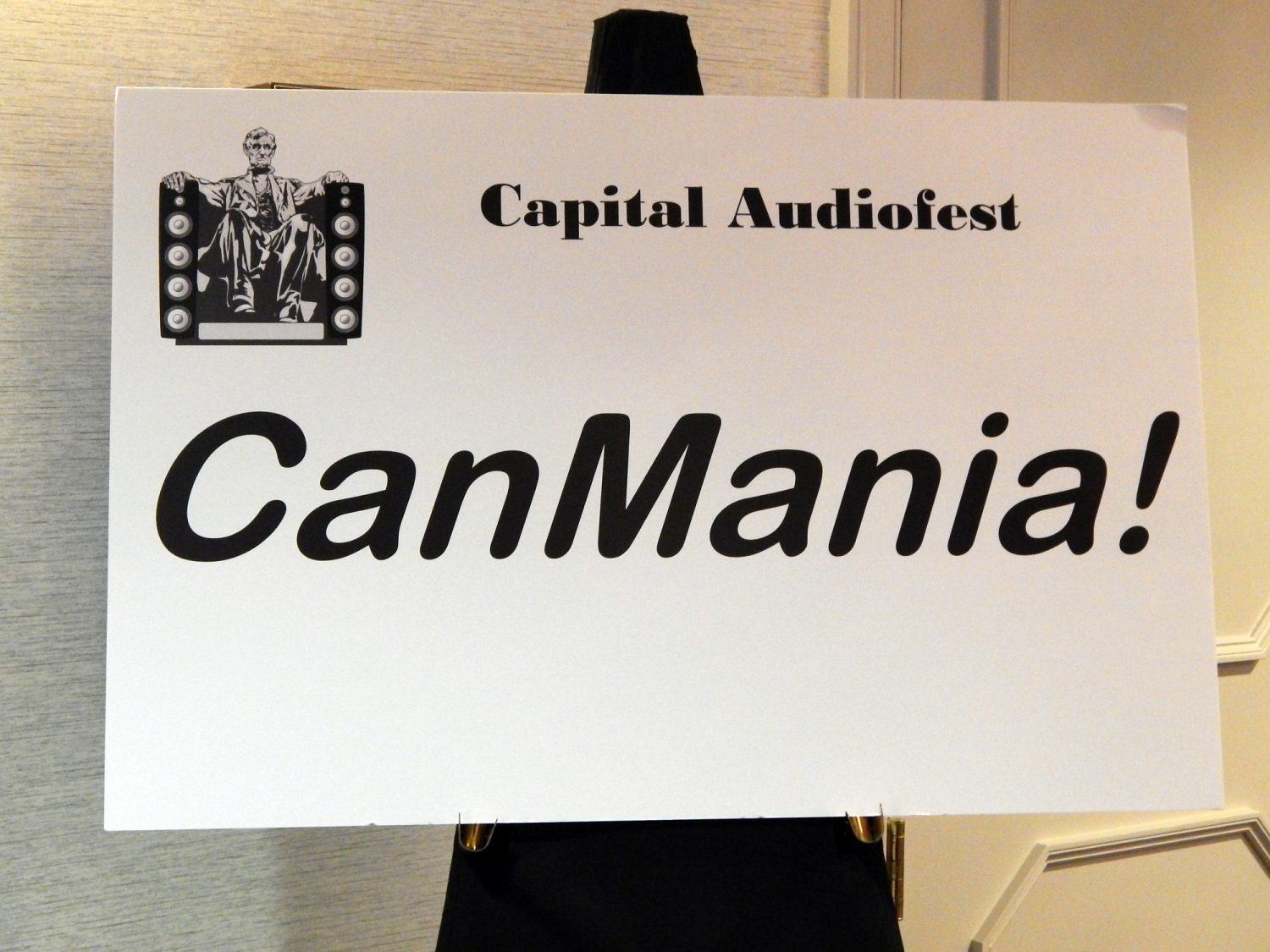 After a 2-year hiatus, CanMania is back and showcasing some of the finest in Personal Audio. Here are reports on what’s new and exciting.

My first stop was at the AmpsandSound booth manned by Justin Wilson and his partner Jeremiah. They were showing a range of stellar tube amplification starting with their $1650 Kenzie headphone-one amp running a 12SL7 input tube and a pair of 1626 output tubes. This little amp sounds very ‘tubey’ with a rich warm sound that is the sonic equivalent of comfort food!

The Kenzie is now also available in a headphone/preamp version called the Kenzie Encore for a base price of $1,995. With 2 inputs (presumably one for your DAC and one for your phonostage) and both headphone out and RCA single ended outs, this is the heart of a sweet system.

The $1850 Mogwai is the amp for when you need a little more oomph. It outputted 1.8w into 32ohms at the headphone tap and 3w into 8ohms at the speaker taps. Yes, the Mogwai is a sweet little amp for both headphones and high-efficiency speakers. Tube rolling options are extensive. It uses the fairly common 6SL7 for input duties and everything from 6L6’s to KT88’s for the output! There are upgrades available as well.

The Big Boy at the table is their Agartha. This is a 300B-based amplifier for both headphone and 2-channel speaker listening. With 8w speaker output into 8 ohms, you can draw very musically satisfying sound from 90+db efficient speakers and the 300B’s sound for headphones is legendary. Given the price of other 300B offerings in the headphone arena, the $3,600 asking price is quite a deal!

Also brand new was their first foray into phono stages. The battery powered black box allowed for MM and MC, had 2 phono inputs as well as a line input.

I spent time listening to the Agartha and the Kenzie Encore with ZMF and Audeze headphones and found them both to be fantastic. Warm, yet quick. Check them out…you won’t be disappointed!

Beyerdynamic
Across the aisle was the Beyerdynamic booth where Pete Carini was showing off a few new models.

The DT240’s are their foray into the mass-market. These $99 headphones feature detachable cables, a 1/8” to 1/4” adaptor and are featherweight. These are awesome for the daily commuter!

The Aventho (who comes up with these names?) are Bluetooth wireless over-ear headphones that feature APTx HD and a 20 hour playback time on a charge. There is an accompanying app that allows you to do a hearing self-test and which will create a custom profile based upon the results…pretty cool. They are $449 and shipping now.

The Xelento are in-ear monitors that are available both wired and wireless (the wireless comes with the wires as well, but the wired version does not come with the bluetooth adapter). The wireless version is $1199

The Impacto is an inline DAC/Amp to give you higher power and better processing on the go…with Beyer or any other headphones. There are 2 versions…one for Android that runs $299 and an Apple version that is $349 because it includes a battery needed to avoid the dreaded ‘too much draw’ message from iPhones.

iFi
The iFi booth found Jared Orgeron showing the sexy iDSD Black Label DAC/Amps. The two models are called the Micro and Nano. The Micro version is physically larger, but packs a whopping 4WATTS! You can expect 10-12 hours of playback for your $549

The Nano is smaller but still gives you 280mW and now includes a hardware MQA decoder. All this for $199

Also on display was the EL-34 tube powered Stereo 50 desktop DAC/amp. This wood-cased beauty can power the most demanding headphones, as well as, speakers! Inputs include Bluetooth, USB, SPDIF and even phono! Amp pricing is $1450. Add a pair of your own speakers or iFi’s own LS3.5’s for a complete desktop experience.

Clear Tune Monitors
The CTM booth was manned by audio engineer Castor Milano. Caston was especially excited to show me the newest IEM offerings…the DaVinci line, made up of 9 and 10 driver variants. The 9-Driver, aptly named the IX, runs $2,000 while the 10 -Driver X will be $2,200. I spent some toe-tapping time with the X’s being played from a Sony DAP and my notes included things like “Solid Midrange” and Deep bass, no bleed”.

CTM has 7 models of U-IEM’s that start at $300. They also have a line of Custom IEM’s that feature extensive customization options.

Schiit Audio
While Jason and Mike stayed back in California, no doubt working on more cool offerings, they had a booth manned by local volunteers that showed the breadth of their line.

There was a Yggdrasil/Ragnarok stack that was everything you’d expect from the $4K flagships.

They also showed a Gungnir/Mjonlir2 pairing ($849 each) that hit as hard as Thor’s Hammer!

Next up was the $399 all-in-one DAC/Amp, the Jotenheim that some have labeled the bargain of the line.

Lastly, the diminutive portable DAC/Amp, the $99 Fulla2, rounded out a lineup that let’s you have great sound at price points from $99 to $4,000 and literally every step between!

Mr. Speakers
While Dan Clark, founder and owner at Mr. Speakers, was away at a show in Asia, his daughter held down the fort in DC. She was happy to show me their standard line of great-sounding Ether headphones, but the star of the show was the new Aeon Open Back ‘phones. At $799, these are an astonishing value for a planar magnetic headphone. Oh, and they sound phenomenal! While the $1,799 Ether-Flow’s offer a bit more air and detail, the Aeon Open’s push them pretty hard…for a grand less! Dan better get back and start making these as fast as he can!

2-channel rooms
After spending time in the CanMania room, I ventured out into the Hilton to see (and hear) some of what the Two-Channel world had to offer.

Talk about extremes! Mat was showing just 2 turntables at the show:

The brand new Cliffwood (named for the town in which it is designed and built, Cliffwood, NJ) table that comes complete with a custom Grado cartridge for $900. Yes, you read that right…a sub $1K VPI table.

The amazing part of the demo was that with both of these tables running through the brand new, Mike Bettinger designed, Voyager Phonostage, the difference wasn’t as great as you’d expect. The $900 Cliffwood defended it’s honor very well against the Avenger! You really do get a true VPI sound and $100 change from a $1K investment!

Speaking of that phonostage, for $2500 you get a dual input, MM/MC preamp that allows you to adjust the loading…from the front panel! No need to crawl behind your rack!

All of this cool phono gear was playing through Luminous Audio electronics and very cool open-baffle Pure Audio Products speakers.

Rogers Audio/Burwell
Continuing with the Vinyl theme, I stopped into the Rogers Audio room where I was greeted by Rob Pleyer of Rogers Audio and and George Burwell of Burwell & Sons Speakers. Rogers showed their awesome PAIA phono stage (driven by a VPI Avenger Reference) feeding their epic 34SI Integrated Amplifier which was driving gorgeous (visually and sonically) Burwell Homage Series speakers. I sat in the sweet spot and didn’t want to leave!

Rob also showed me the $1000 65V1 Integrated amp that is long on value while maintaining the Rogers sound…and build.

One of the coolest parts of owning a Rogers amp is the wicked cool iPad app that allows you to control the amp from your iPad!

GTT Audio
I also made a point of visiting the GTT Audio room where GTT’s Bill Parish was on hand along with YG Acoustic’s Dick Diamond and Joe Kubala of Kubala-Sosna Research.

The imaging was intense while the depths to which the bass delved belied the diminutive nature of the speakers. These small black towers have a high WAF (wife approval factor) due to the way they can fit in most rooms without dominating them. They played me the track ‘Earned It’ by The Weekend and the speed, imaging and force from this physically small system was jaw-dropping!

Valve Amplification Company/VonScheikert Audio/Esoteric Audio
The largest room at the show was occupied by the largest system at the show! The 7’ tall Ultra 11 speakers are visually imposing while simultaneously being a work of art. Damon Von Schweikert explains that these $300,000 beauties were soon going to have a slightly smaller sibling…stay tuned.

The speakers were being driven by 4 of Kevin Hayes’ amazing VAC Statement 450 amplifiers! These were being fed by a Statement Preamp & Statement Phono Stage for a true cost-no-object system that did not disappoint. Digital Front end duties were handled by Esoteric DACs.

I had the privilege to hear this system before the show opened in an almost empty room. The experience was surreal. I suggested that they should pump in some cigar smoke to complete the lifelike jazz club experience…because that was all that was missing!

Klaus was showing a pair of his Khartago Mono amplifiers ($2000 a pair) driven by a $1,600 Candela pre-amp and $1,950 Suspiro two-box phono stage being fed by a VPI Avenger turntable. All this was driving a pair of his gorgeous $2,900 Lorelei speakers.

He told me to take the good seat then dropped the needle on the Direct to Disc version of Santana Abraxas…specifically Singing Winds, Crying Beasts…and then dropped the house lights. I’ve heard the track a hundred times, but never like this. It felt like I was onstage. The music came out and surrounded me to the point that I had to verify that there was no surround sound trickery. There was none. It was one of the most surreal experiences I’ve had while listening to music.

This is what high-end on a (relative) budget is all about!

That wraps up my show coverage from DC. Thanks for reading! Until next time…