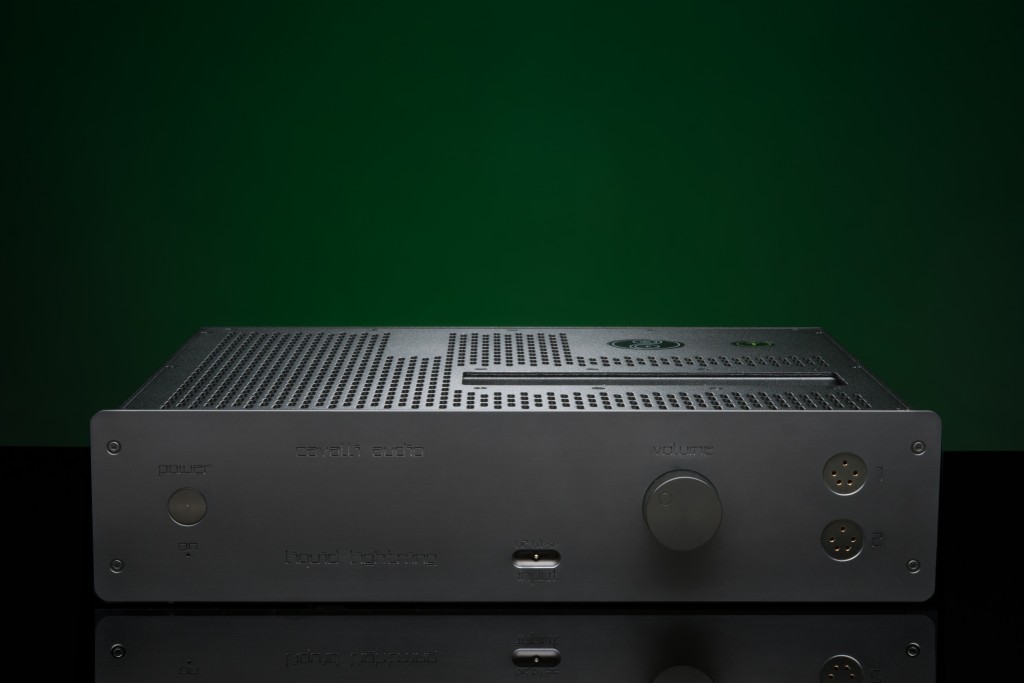 Around a month ago I published the Liquid Lightning 2 review and noted that I would have a chance to hear the new tube version of the amplifier from Cavalli Audio. Thankfully, I have had several weeks with this new unit and like the LL2; the LL2T has impressed me thoroughly.

In summary, the LL2T is a hybrid (tube + solid state) electro-static amplifier designed and manufactured specifically to power electro-static headphones (like the Stax SR-009 headphones) from Cavalli Audio. Just like its solid-state brother, the LL2T is capable of outputting 400V rails (that’s 1600 V peak-to-peak). The Liquid Lightning 2T also has three inputs (2 x balanced and 1 x RCA) and a loop-out balanced connection. This is a handy feature if you also happen to also have a traditional headphone amplifier. You won’t need to constantly adjust and move around your cables to switch from one amplifier to the other. Just grab a second pair of XLR cables and you can loop out the signal from your source, through the LL2T, to your dynamic headphone amplifier (or speaker amp for that matter). There are two headphone outputs: One standard Pro bias (580V) and the second can be customized at the time of order to either: 580V, 540V or 500V. 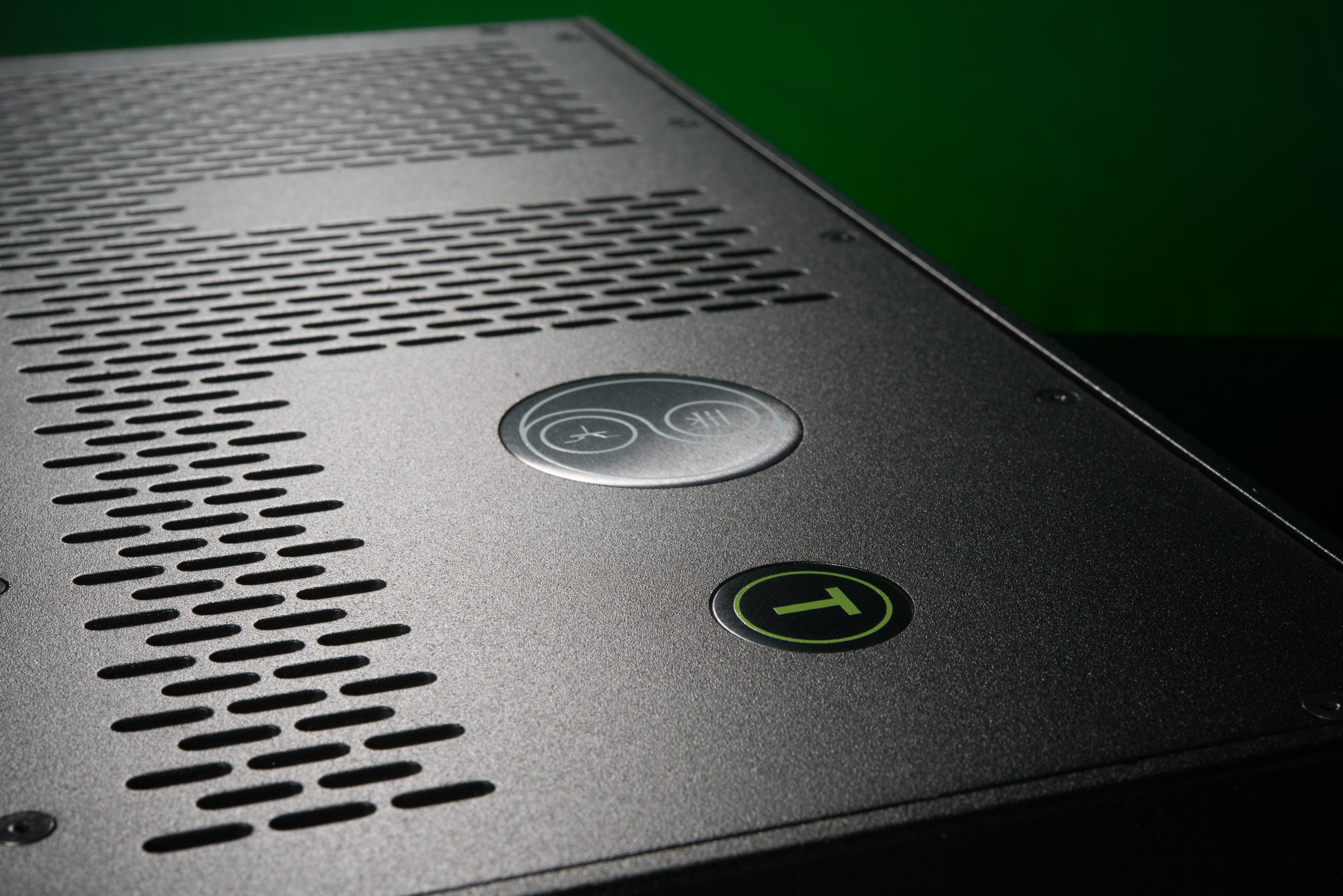 The construction is almost identical to the LL2 and the casework, as noted in my LL2 review, is top shelf quality. The all-black finish is seductive and the matte finish of the case is a sight to behold. There have been some slight modifications to the top of the case to allow for the presence of four 6S4A vacuum tubes. Internally, this resulted in a requirement to change from the multi-gang TKD volume control (which has a shaft that runs from the volume control to the back of the amplifier) to an optically coupled photo resistor volume control. My unit is from last year and has the multi-gang TKD control and while the new volume control setup is quite good, I prefer the TKD option. The knob has a silkier feel to it as I turn it and the newer one has a slightly different attenuation curve that requires me to turn up the volume level to about 1-2 o’clock; whereas with the TKD setup, this was typically at 10-1 o’clock. On some of my more demanding recordings, the LL2T was more than able to handle them with ease (even when using my less efficient Stax SR-007Mk1 headphones). So just as with the LL2, the tubed-version has all the same bells and whistles and the construction is just as equally impressive as the solid state version, but this time with an enticing tube-glow and the option for tube-rolling to adjust the sound to one’s particular tastes.

The LL2T comes with a set of four installed and pre-tested 6S4A tubes. The amplifier is pre-biased at Cavalli Audio for these tubes. You also get a quad of backup tubes to use down the road when/should you need them. If you want to roll in tubes other than the factory installed ones, you’ll need to manually bias the amplifier to accommodate for them. The methodology is quite simple (the instructions are included) and similar to the Blue Hawii Special Edition electro-static amplifier from HeadAmp. All you’ll need is a DVM (Voltmeter) and about five minutes. The DVM leads are put into the output jack and the small adjustment screws are on the bottom of the amplifier. You do not need to open the unit.

As done with my previous Liquid Lightning 2 review, testing gear has mostly been the same. My headphones were the Stax SR-007Mk1 and the top-of-the-line Stax SR-009; however, I have recently upgraded my DAC from the Bryston BDA-2 to the Metrum Hex DAC. I played both CDs (via my Cambridge Audio 650C transport) and high resolution music files from my iMac using Amarra 3.0). To help regulate any USB power anomalies, I still have the Schiit Audio Wyrd USB Power Isolator in between my iMAC and Metrum Hex. While the SR-009s are very detailed and revealing of the source, they are quite a bit more efficient and easier to drive than the more stubborn SR-007Mk1s. And like the LL2, the LL2T was up to the task with both headphones. 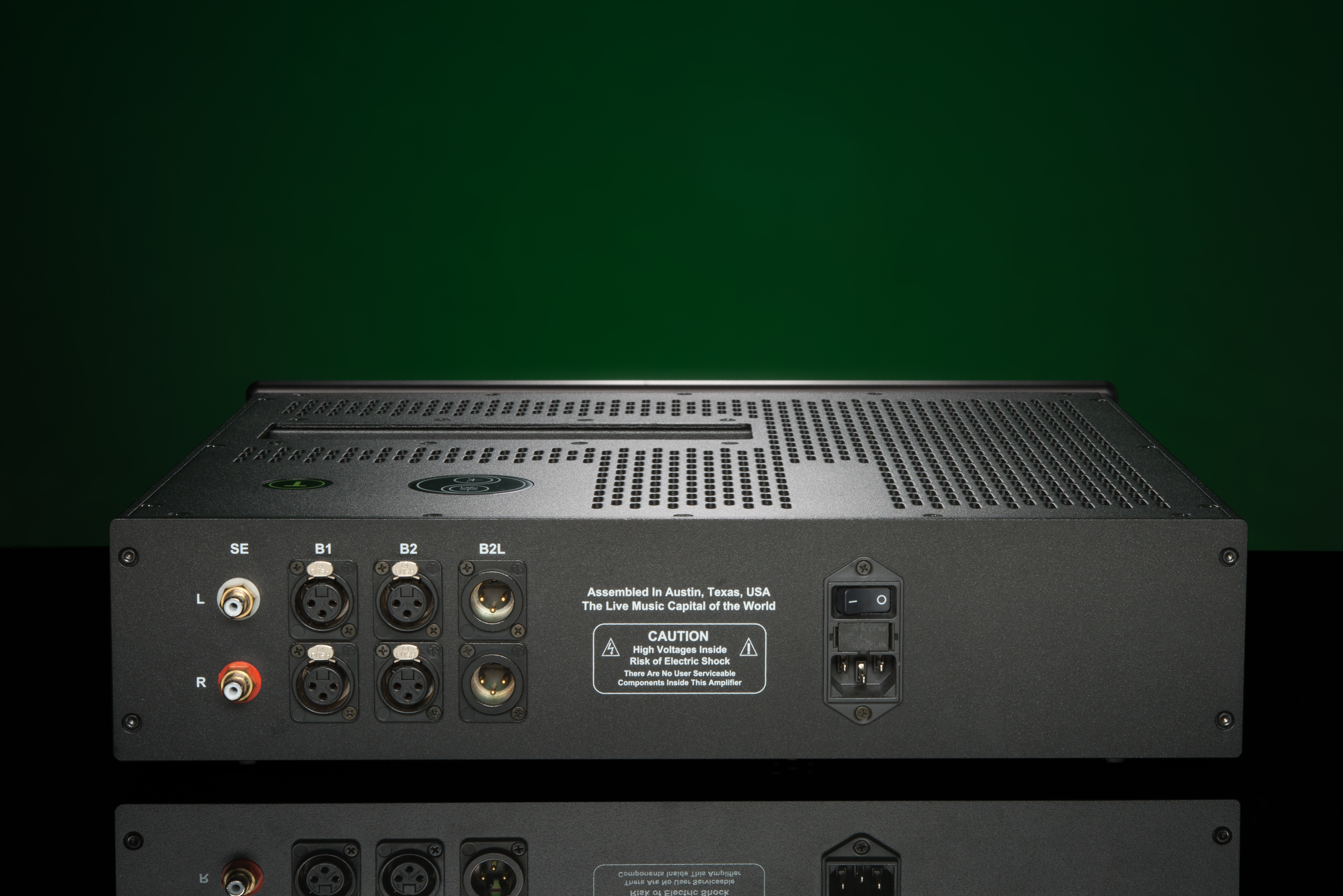 First up, Jazz at the Pawnshop, and all the outstanding imaging and micro-details were still there with the LL2T. However, there were some slight differences. While the LL2 is a quick and nimble amplifier, the LL2T has a bit more of a romantic sound to it; the edges were smoothed off somewhat in comparison and this led to a pleasing pairing with the SR-009s. The sound staging was a tad wider and improved with the LL2T; whereas the ability to reach deep down into the recording and render the smallest bits of information was ever so slightly better with the solid state version (LL2). Both had me smiling from ear to ear as the music just flowed. As the LL2 was a significant improvement in sound quality over the Stax SRM-727II (solid state version), the LL2T is equally a good step up from the Stax SRM-007t (tube version). Details are present and easily detectable, but not thrown at you in a way as to distract you from the emotion of the music. This can be an issue with the KGSSHV with very high resolution recordings. Alternatively I found the SRM-727II or LL1 was a bit lacking in revealing these tiniest of details. The LL2 and LL2T seem to straddle this middle ground with the upmost care to the overall presentation. I do however give a slight edge to the LL2 in this regard, but the LL2T does an impressive job and offers a more romantic sound signature all the way through.

Next up was Hotel California by The Eagles (of course). This is one of my favorite albums and I’ve come to know it quite intimately over the past few decades. Again, the LL2T was able to portray the music in a way that just flowed from the recording. It was a very smooth and enticing image that was portrayed with the LL2T and SR-009s. As with Jazz at the Pawnshop, the sound staging was excellent and the sound of the acoustic guitars was as life-like as I’ve heard. The LL2 equally did an outstanding job with this recording with very fast and dynamic transients that offered a microscope into the recording. The bass on the LL2 did seem to dig a little deeper and hit a little harder in comparison, but the LL2T was no slouch in its own right. The treble offered a remarkable amount of detail for a tube amp and often times I had to look down to make sure I wasn’t listening to the solid state version by mistake. The upper mids/lower treble did have a slight emphasis with the LL2T however that wasn’t there with the LL2. I’m not sure if tube rolling could change this as I don’t have any tubes on hand to roll; but owning various tube amps for many years, I’m sure that they are out there. This is a minor effect and should be taken as such. The LL2T still offers a very natural and clean sound that I’m sure many tube enthusiasts will really enjoy. With some tube amps that I’ve owned, I’ve found that they lack the ability to portray micro-details in the treble region (I do realize that this is a generalization, but a good number of tube amps I’ve owned have forced me to this anecdotal conclusion). Thankfully, the LL2T does not suffer from this and offers wonderfully rich details of the shimmer of Don Henley’s cymbals that rivaled some of the very best solid state amplifiers I’ve heard. Glen Frey’s voice was eerily lifelike on New Kid in Town and really had me smiling. I’ve heard this album approximately a hundred times and I’ve got to say that my time with the LL2T and SR-009s was definitely some of the most memorable.

I find that almost all of my reviews involve a Rush album in one way or another. And that was certainly the case with the LL2T. For this review, I primarily used Hemispheres and Farewell to Kings. Hemispheres has one of my favorite guitar solos of all time on “La Villa Strangiato”. Alex Lifeson’s solo is a guitar test track that I’ve used over and over again and the LL2T/SR-007Mk1 it hit on all cylinders! The individual guitar picks were readily heard and the tone, timbre, and details were all spot on to my ears with this track. Geddy’s voice was as good as ever too. I’ve been lucky enough to see them live several times through the years and I’ve got say that with both the LL2 and LL2T, Geddy’s voice was simply spot on throughout his wide vocal range. I would say that both amps are fairly similar in regards to the midrange with a slight more emphasis on the upper-mids with the tubed version of the Liquid Lightning. But neither amplifiers offer a mid-range that is lacking in anyway or recessed whatsoever. Instead what I heard were a very organic and real sounding vocals (both male and female) that were able to really pull me into the music and keep engaged. Amplifiers like the Stax SRM-727II or SRM-007t had a bit of a haze in this area and somewhat of a mid-range withdrawal that over time seemed to put a wedge between me and the music. Thankfully both Cavalli amps don’t suffer from this and offer a portrayal of the music that just keeps you coming back for more. 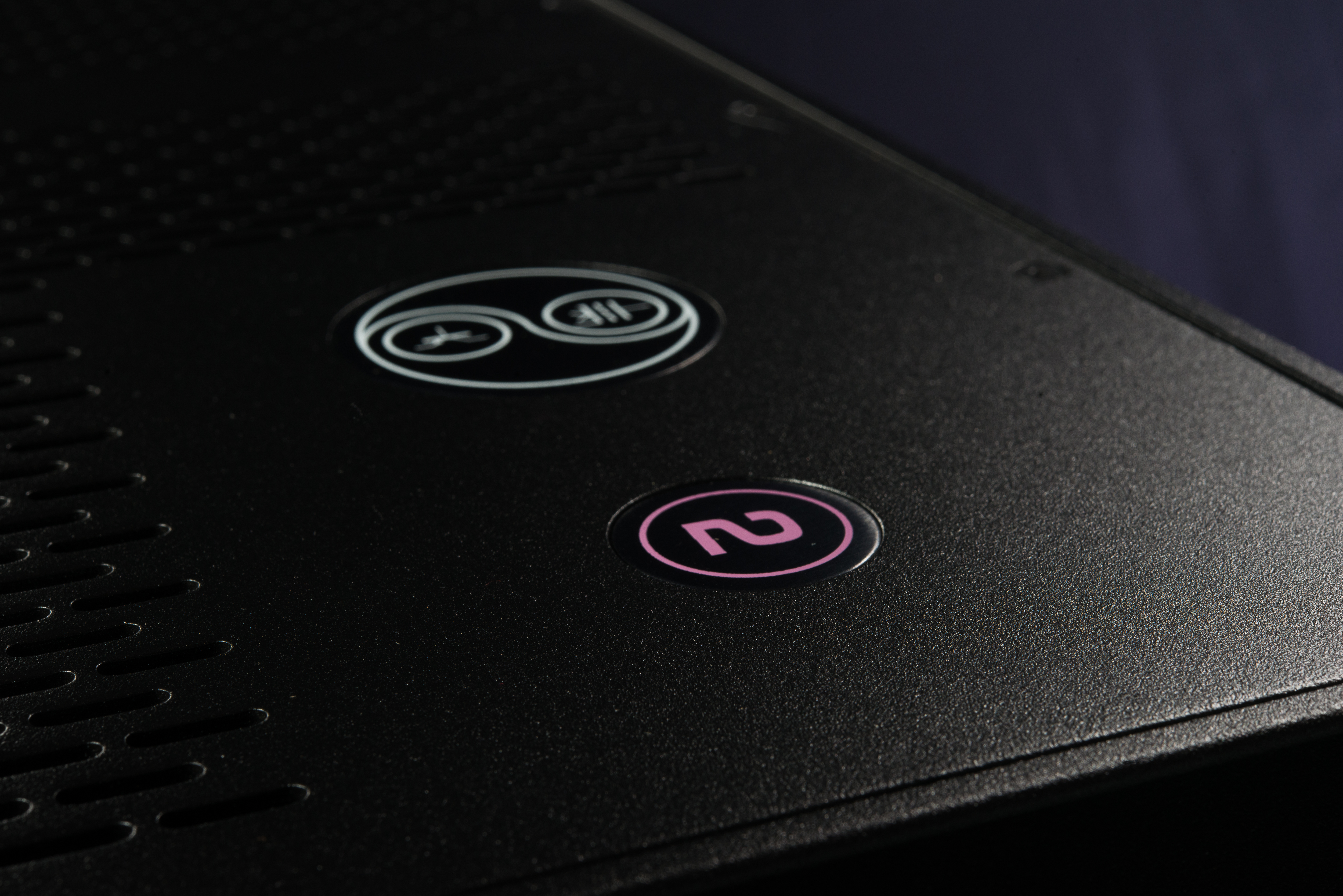 Deciding between these two great amplifiers is going to be a tough call. If you’re an old school tube guy or gal and appreciate the benefits that they can bring (including tube rolling to better “tune” the amplifier to your preferences and the slightly warmer and more enveloping sound with outstanding imaging), then the LL2T would be my recommendation. If however, you prefer the convenience of solid state gear, not having to wait for 30 minutes for the tubes to fully warm up, not having to spend excess funds on vacuum tubes and prefer very quick transients that are incredibly dynamic and punch with deep and powerful bass, then I would suggest the LL2 solid state version.

Now, when my two electro-static headphones are taken into account, I can definitely understand how some might prefer the LL2T with the top-of-the-line tax SR-009s. These headphones are very clean and extremely quick. The LL2T is a great complimentary amplifier for those looking to add a touch of warmth. With the SR-007s, I found the LL2 a better match as it has a slightly better ability to control the drivers and offered an improved control of the bass and offered a little more top end sparkle. Something I think the SR-007s truly benefit from.

Overall, I was impressed with the Liquid Lightning 2T and I think it is a wonderful new addition for Cavalli Audio to offer alongside the solid-state based Liquid Lightning 2. I do have a slight preference for the solid state version however as I find the convenience of solid state just too hard to give up now after being tubeless for the past several years. As well, I did end up favoring the slightly quicker and more dynamic sound of the LL2. In the end, however, the listener will have to decide which choice they prefer in their setup. But there is no bad choices here, only great sounding ones.