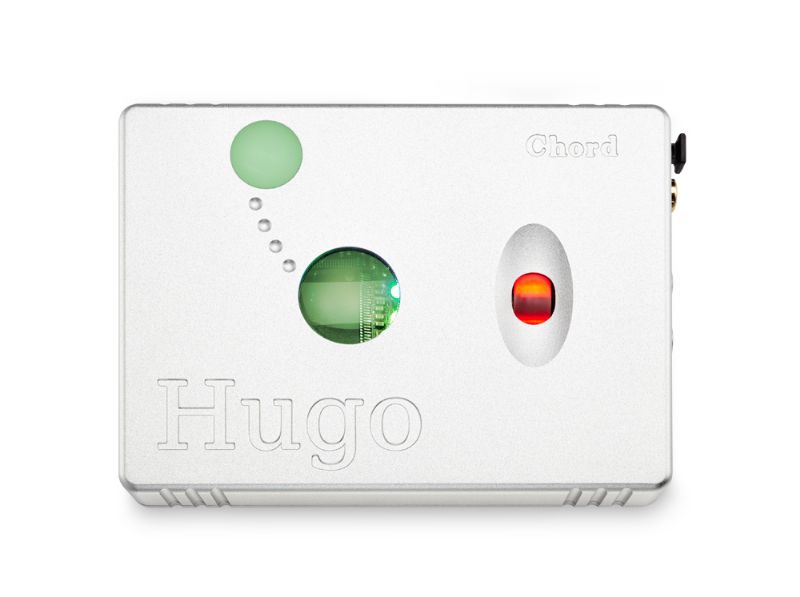 Since Chord Electronics was founded in 1989, the company has sought to introduce groundbreaking technologies in the world of high-end audio. From the launch of the DAC 64 over 20 years ago to the introduction of the QuteHD, and now the Hugo, Chord has helped pave the future for high quality digital audio.

The Chord Hugo rides on the history of a well respected British audio company and a slew of new innovations, including PCM and DSD 64 + 128 playback, Bluetooth connectivity, 24 bit, 384 kHz resolution, and the ability to drive any headphone with an included pre-amp/headphone amplifier section. The Hugo is a product designed for a 21st century audiophile, one who desires the highest quality of reproduced digital sound, whether inside or outside the home. And this is exactly what Chord has achieved with the Hugo.

The DAC section in the Hugo uses a Field programmable gate array (or FPGA, for short). This is where the Hugo differs from most DAC’s, as the chipset is a completely unique design. Instead of outsourcing a DAC chip from another company, such as Wolfson or Texas Instruments, the chip in the Hugo was designed in-house by Chord. Through designing the chip-set themselves, Chord have been able to tailor the specifications to a small, compact device – some of features include; SPDIF decoding, USB timing, WTA filtering, DSD decoding and filtering, volume control, crossfeed control, noise shaping, along with converting the digital signal to analog. This allows engineer Rob Watts to program algorithms using his Watts transient aligned digital filter (WTA) to achieve that signature Chord sound. This amount of control allows for great flexibility, especially in terms of tweaks or future upgrades.

When reading a digital file, the FPGA uses a noise shaper and preceding filter that can accept 44.1KHz CD quality or higher signal. Once the signal is received the DAC will then up-sample and re-model the original waveform by “inserting” information at intervals along the digital samples at an impressive 32 times per clock cycle. By implementing this technology, Chord Electronics have managed to move away from the sharp and edgy sound of most digital sources to a more refined presentation of warmth, smoothness, and detail. 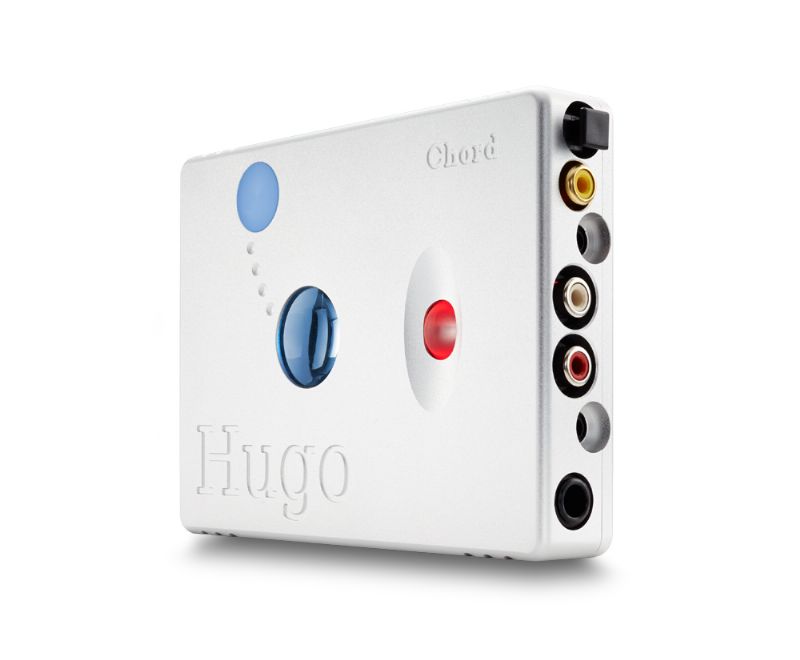 the Chord Hugo, I wasn’t too impressed. I thought that a device so small and dinky looking surely wouldn’t accompany a top end audiophile rig. But in person, the build quality is exceptional and impressive. The Hugo is wrapped in precision cut aluminum and is solid. All interconnects are robustly fitted and are thankfully included along the sides of the device. However, there is a slightly goofy feel to the design and I think this is one of the shortcomings of the Hugo, albeit a small one. I just don’t think that it looks like a $2000 piece of equipment. The see-through plexiglass and light-up LED aesthetic is one that makes sense with the larger Chord products, but in my opinion, falls short with the Hugo.

Yet, the Hugo’s compact build makes it one of the best, if not the best portable DAC/amplifier on the market. I traveled by bus with my laptop/Hugo and the performance was excellent. The battery life for a device that packs so much versatility is truly astounding, thanks to the new Xilinx chips that can run with less than 0.7 volts. When I compare Hugo’s DAC and amplifier section to any of the portable devices that I have heard, such as Fiio’s E11 E17 and E7, the results are laughable. But it should be, given the price difference. 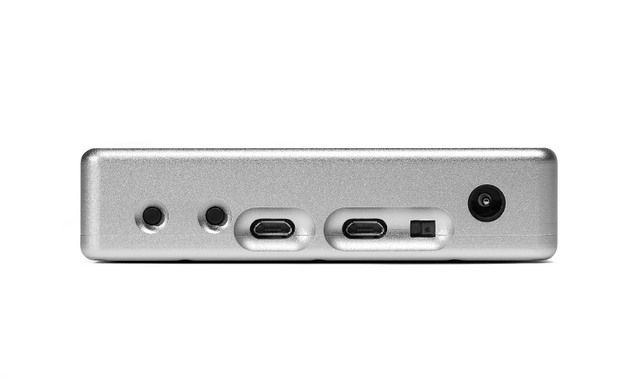 The real strength of the Chord Hugo is, of course, the sound. And the sound is amazing.

A short time ago I had a chance to hear the NAD M51 and Twister Pear Buffalo DAC2. Both of these are considered good sounding DAC’s, especially the NAD. I actually auditioned the NAD on four different occasions and each time spent at least six hours listening. At the time, I was comparing the NAD to my Arcam rDAC and I found it hard to hear huge improvements. As the hours went on I began to hear slightly more detail and an overall smoother presentation. I remember being shocked at the time because the NAD is five times the price of the Arcam, so in the end I decided that the differences were too small to justify the purchase.

Because of my experience while testing DAC’s, I was expecting similar results with the Chord Hugo. I had come to the conclusion that the differences between DAC’s are minimal, regardless of price. I was horribly wrong.

The differences between the Chord Hugo and the Arcam rDAC are huge. The improvement in quality is instant, something that I did not experience with the NAD. When I compare the two, the RDAC sounds like a bloated mess. The Hugo’s staging and imaging abilities are far above that of the rDAC. The bass in the Hugo is tight and controlled, while the rDAC’s bass is loose and flabby. There is naturalness to the Hugo that the Arcam cannot compete with. Compare the 26,000 taps in the Hugo to the rDAC’s sub 300 taps and it starts to become apparent why the differences are so drastic. In fact, the Hugo has more taps than any other DAC yet developed.

The amplifier section of the Hugo surprised me nearly as much as the DAC section. While comparing it to my Woo Audio WA2, I was surprised at how close it came in performance to the Woo. I used the Senheiser HD800 and Beyerdynamic T1 for most of my listening. The Hugo had great synergy with the HD800. The most noticeable difference between the Hugo’s amp section and the WA2 was a slight harshness to the Hugo’s treble. That’s to be expected considering the WA2 is a tube amp and probably the most romantic sounding of the Woo Audio line. The WA2 has a larger soundstage, but the Hugo’s sound can be slightly more detailed, given the right song. It’s not that you can hear more coming through the Hugo than you can with the WA2, but it seems that with certain tracks the Hugo can convey particular sounds with more accuracy.

During my first week of listening I didn’t find the need to plug in the WA2 because the Hugo’s amplifier was so fulfilling. Halfway through my second week I started to use the Hugo as a DAC and running it into the WA2. This was the set-up that dominated my listening thereafter. Although the amp section in the Hugo competes with the WA2, I prefer the WA2. The Chord Hugo is extremely close to an end game system, especially with an HD800 or T1. Even with my WA2 maxed out with upgraded tubes (TS 5998 – Jan Silvania 7308 – RFT EZ80) the Hugo’s amp almost matches the WA2’s performance. I also had a chance to hear both the Senheisser HDVA 600 and 800 while I had the NAD M51 and the Hugo’s amp section is on a par with both of these. Although I found the HDVD800 a tad smoother sounding, the Hugo has an assertiveness that I prefer. 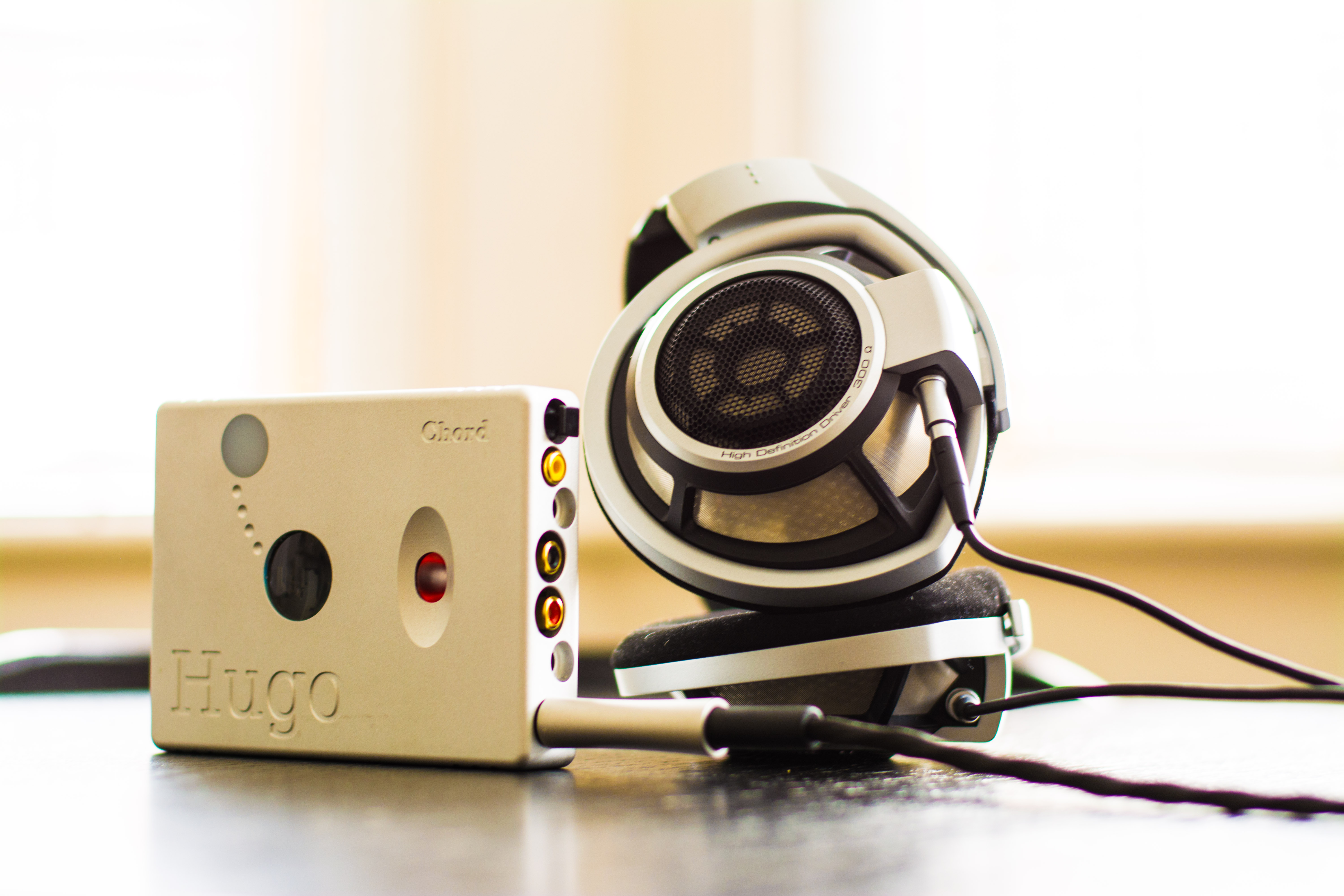 The music coming out of the Hugo sounded simply incredible. From Wynton Marsalis’ “Sophie Rose Rosealee” where I could hear every movement of the brushes on the drum kit and the actual breathing of the players, to the weighty synths of Parliament Funkadelic’s “Knee Deep”, where the backup singers were so accurate that it was as if they were standing beside me. Every possible detail in a recording that was hiding within a recording was easily relayed by the Hugo, and with an authority that leaves you nothing short of stunned. One of the most impressive moments with the Hugo happened while listening to Han Nang Chan’s rendition of Shostakovich’s Cello Concerto No.1 (Cadenza). Not only did I hear the movements of her hands up and down the neck of the cello, but her moving in her chair. And perhaps most impressive was the representation of her bowing, every subtlety was captured and revealed with astonishing clarity.

Simply put, the Chord Hugo is the finest DAC that I have ever heard. It also sports one of the best headphone amplifiers I have ever experienced. The Hugo can reveal details in music that I never thought possible. Build quality is excellent, and even though I am not a the biggest fan of it’s appearance, the sound more than makes up for its aesthetic shortcomings. Couple that with the fact that it is one of the best portable Amp/DAC’s in the world and you have a product that is hard to beat at any price.