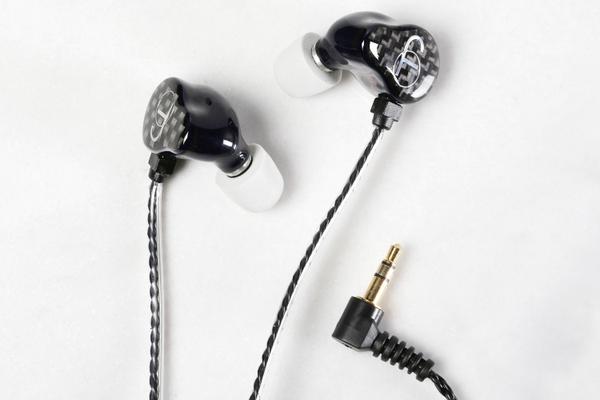 Portable audio has a number of companies with well-deserved reputations for delivering great sound. Cypher Labs from Lake Oswego, OR. is one of the companies whose gear is considered aspirational for the Head-Fi crowd. The AlgoRhythm Solo was one of the early “Go To” TOTL DAC’s for the on the go audiophile. The Theorem 720 is in the discussion for best portable DAC/Amp combos. The Prautes collaboration between Cypher Labs and Coffman Labs is a significant player in the tube headphone amp arena. Just when we were all waiting on the next great amp or DAC from them along comes the C6iem balanced armature earphone. A universal iem (In Ear Monitor) that has a black 3D printed shell with Carbon Fiber and Chrome faceplates no less! Stylin’ and groovin’ for sure!

Technically the C6iem’s incorporate 3 Balanced Armatures per side; One Bass, One Mid and One High Frequency using a passive crossover network. The connector is a standard two pin allowing for cable upgrades as desired. An impedance of 36.2ohm’s makes them an easy earphone to drive.

The C6iem’s are well supplied with accessories. Three pairs each of three different types of ear tips (Silicon, Soft foam and Dense foam) come in individual packs along with a small cleaning brush, a 1/8” to ¼” adapter plug and a foam fish shaped cord wrap to keep the cable from tangling while stored. There is also a nice quality felt storage pouch for the C6iem’s and it all zips up in a nice protective travel case. Also included in a business card with the technical specs and an overview of the C6iem BA’s (Balanced Armatures) and 3D printing review. Everything you will need to manage the care for your new IEM’s is included.

After unpacking the C6iem’s I decided to put them through my typical day. I travel extensively for work so quality portable sound is the game for me. This involves use in the car, walking around town, in restaurants and in the gym. I was interested in sound quality, isolation and comfort. I spent some time comparing the different ear tips and settled on the medium soft foam option as the best fit for me.

First, the C6iem’s are very comfortable for long-term use. They were always snug and cozy even with many hours of wear. Compared to my custom in ear monitors like the JH Audio JH16’s or the ACS Custom T1’s the isolation of the C6iem’s was not as complete. I have never used a universal that could compete with a custom in this case however. Generally speaking though, this was never a detriment to the quality of the audio presentation except in very noisy environments. A slight increase in volume tended to solve the problem. At the gym they were stable in my ear for a 10k run on the treadmill. No issue there.

I brought several pieces of gear with me to use for this review. The aforementioned JH Audio and ACS CIEM’s, Astell & Kern’s AK120 mkII portable DAP (Digital Audio Player), Fostex’s HP-P1 portable DAC/Amp, LH Labs Geek Out IEM USB powered DAC/Amp and the new Geek Out 2 USB powered DAC/Amp with the latest ESS Sabre 9018AQ2M chip. I selected the JH16’s because they are an eight driver IEM vs. three in the C6iem’s. The JH16’s run $1149 and have quad bass drivers and really delivers the low end. The T1’s at $999 are three driver like the C6iem’s that are tuned for a more reference sound ( a flatter response curve) but are a silicon shelled custom IEM. One higher priced CIEM of similar three-driver design and one that accentuates bass via its quad bass drivers. Both should outperform given their 2X price difference with the Cypher Labs offering.

I queued up Ace of Base’s “Don’t Turn Around” from The Sign. (AIFF 16/44 1411 CD Rip)) I enjoy Pop music and this track has a solid bass line that can seem almost EDM like in its power and energy. In the marketing of the C6iem’s Cypher Labs declares, “It’s all about the bass!” Compared to the T1’s single low balanced armature driver, the C6iem delivered a very solid foundation. Very satisfying! The C6iem’s have the low-end juice to stand with more expensive custom single driver competitors. After that winning comparison I stacked the deck with the quad bass driver JH16’s. These are my primary CIEM’s and it was, as expected, no contest. Four drivers beat one. Of course at twice the price it should be a clear win for JH Audio. If you are a bass head then single drivers will struggle against better-armed competition. Reference tuning fans will receive full measure.

Next I wanted to get a feel for the midrange. Mason Williams‘ Classical Gas, Music 1968-1971, (AIFF 16/44 1411CD Rip) is a long time favorite. His expert acoustic guitar work on this recording allows the feel of each string being plucked and strummed. The C6iem’s gave a great presentation. The sound was clear and full. Compared to the Custom iem’s the midrange presentation was similar. All in all I was please with each of them. A great showing for the C6iem’s!

Time for some party music. Oingo Boingo’s Dead Man’s Party, Best O’ Boingo, (AIFF 16/44 1411 CD Rip) is a fun pop song with New Wave and Ska influences from 1985. This is a challenging track for a lot of headphones. It combines precise guitar work; horn sections, drums, synths and a solid bass line to drive a serious dance beat. Separating all of these elements and not smearing the presentation is a serious challenge for any headphone. The C6 struggled a bit here, as the horns at times got a bit lost behind the guitar and drums. The higher frequencies were not as sharp and defined as with the Customs. I do not know if I can attribute this to a difference in crossover design or the choice of specific BA driver.

Shifting to female vocals I put on Annie Lennox’s Ghost in my Machine, Songs of Mass Destruction. (AIFF 16/44 AIFF CD Rip) The C6iem certainly enjoyed being driven by the AK120mkII. The song rocked. It is always a win when you stop critical listening and just get into the song. Once again it was a beautiful presentation that was missing a bit on the top end. Sold bass and beautiful mid range. Top end shimmer ended before the JH16’s. Nothing wrong just less of it. Less distance toward the higher frequencies. This was consistent with both the T1’s with their single driver and the JH16’s and their dual high drivers. Again, the C6iem presentation was very good. Considering its price point at half the cost of the others it is hard to criticize. The question is can you get into the music. Clearly the answer is yes.

Finally I selected one of my favorite demo tracks, Shelby Lynne’s Just a Little Lovin’, Just a Little Lovin’. (DSD64 www.Superhirez.com) Beautifully recorded with a terrific sense of space and instrument location, this track can reveal the soundstage ability of the headphone. The C6iem does a nice job of conveying that space. Overall it was a lovely presentation. I thoroughly enjoyed the experience.

So what is the verdict on the C6iem? It is a solid mid tier choice for universal IEM’s. There is a lot of competition at this price point but the complete package of sound, quality build and accessories makes the C6iem one to put on the short list for a try out. It is a solid entry into the Earphone market for Cypher Labs.

High end of the price range for this level of performance

Highs roll off a bit early