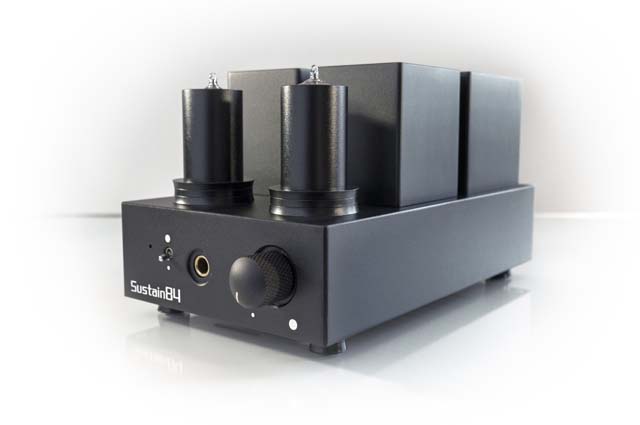 I love tube amplifiers, they’re so sweet and able to reproduce music beautifully as tubes can effortlessly inject an organic quality to the music in a way no other amplifier type can. When properly designed, a tube amplifier will have tonality, soundstage, and transparency that is simply unmatched by solid-state or hybrid amplifiers. The Sustain84 desktop tube headphone amplifier, is no exception.

The Sustain84 is a single-ended Class A ECL84-based tube amplifier and uses two ECL84 (6DX8 tubes may also be used) vacuum tubes to deliver up to 1 watt of power into 32 ohm headphones or up to 80mW of power for 600 ohm headphones. High quality internal components like Z11 output transformers and electrolytic capacitors allow the Sustain84 to drive sensitive IEMs, high and low impedance headphones, and planar magnetic headphones with ease, improving sound quality and reducing background noise. A high/low gain switch offers gain levels of -2dB and +17dB respectively which helps with volume control, especially when listening to IEMs. Removable metal tube shields are also provided with the amplifier to block electromagnetic interference which can increase the noise floor with some tubes. At home, I found them to make little to no difference and preferred the aesthetics of the glowing tubes to that of the metal covers. Other notable components used in the Sustain84 include gold-plated Cardas input connectors, a specially designed switching power supply, and a low-noise fuse.

The Sustain84 uses high quality components throughout, but maintains simplicity in its design and offers only one set of connections. A single pair of RCA inputs and a single 1/4″ headphone output are the only connections available on the Sustain84, and thus, is focused solely on amplifying whatever pair of headphones you’re listening to. There are no pre-amp outputs or additional inputs, which reduces both the size and cost of the amplifier, and keeps the design minimalist and clean.

Build quality is excellent and the amplifier’s construction is minimalist and modern. Lines are few and very smooth, with clean edges and corners and the small amplifier is built like a tank, and looks like one when the tubes are covered. Attention to detail is seen with the smooth turning all-metal volume knob, gold-plated ceramic tube sockets, and solid metal and rubber feet; YES! The machined aluminum chassis features a soft matte black finish and a Cypher Labs logo on top of the transformer enclosure, both are tastefully done but are overall subtle and simple. The Sustain84’s professional appearance works great for work environments but may be a little too plain for some people. I personally like the it, it’s a small desktop tube tank!

For this review, I used the Sennheiser HD 800 as my primary headphone for this review, I am very familiar with its sound signature and it remains my go-to headphone for reviewing tube amplifiers. Other headphones used include my Hifiman HE-6, Master & Dynamic MH30, and Noble Audio 6C in-ear monitors. The Sustain84 used its stock BEL/Philips NOS ECL84 tubes which sounded excellent, and I did not feel like tube rolling was necessary on this amplifier. I used Audioquest King Cobra interconnects as well as Audioquest Power and USB Cables. My source was lossless music files from my computer fed to my Mytek Stereo192 DSD DAC. I also briefly used my Chord Mojo DAC as a source. As usual, my music choices varied and included just about everything.

The Sustain84 sound is best described as rich and engaging; the sound is sweet and euphonic like a traditional tube amplifier, with a slightly-forward midrange and smooth yet extended treble. The bass is textured, fast, and well-defined, with a clean, natural decay, though bass quantity is somewhat light. The sound signature is one that I feel works well with many headphones and one that is easy to like, as it tames the treble of many brighter sounding headphones without sacrificing much detail and the tonality is very natural. The Sustain84 was able to effortlessly drive my Sennheiser HD 800 to very high levels of performance and the combo was quite synergistic. The warm, dynamic, and open sound of the Sustain84 allowed me to enjoy my entire collection with the HD 800 without any fatigue and because of this, I was constantly going back to all my rock albums I usually would prefer to listen to with other headphones like my HE-6 or my IEMs. One of my favorite albums to listen to with this combination was Rise Against’s Appeal to Reason. Tracks like “The Dirt Whispered” and Kotov Syndrome” were just amazing with the combo, I could hear every note and drum beat with incredible ease, the music was right in front of me and the dynamics really made the music that much more lifelike and engaging, so much energy!

Even at louder volumes, there was no harshness and distortion anywhere to be found, and I just wanted to keep listening as loud as I could. My listening continued with Taking Back Sunday’s Louder Now and Tell All Your Friends, where the Sustain’s 3D imaging and transparency allowed me to hear all the small nuanced details in “Divine Intervention” or the intro in “You’re So Last Summer”, both these albums were quite enjoyable as they can be somewhat bright with the HD 800 and now, I was jamming out to my late 2000s playlists again, it’s like being 16 all over again! Although the bass is somewhat on the lighter side, it was still more than enough for electronic music and albums like Dig Your Own Hole by the Chemical Brothers were just begging to be played, time to get “lost in the K-hole” once more! The bass was deep and well-controlled at all times, and it was well integrated with the midrange, which helped add energy to every bass note, and it just all flowed with the music that much better.

Overall, the HD 800 and Sustain84 paired wonderfully and I would highly recommend the pairing to anyone who wishes to listen to their whole library for hours without getting reminded of the HD 800s occasional 6kHz treble glare. No tube rolling required!

The Sustain84 is also an excellent amplifier for driving in-ear monitors to their full potential and unlike many desktop amplifiers, has an extremely low noise floor comparable to some portable amplifiers specifically made for driving sensitive IEMs. The background was totally noise-free and pitch black! My Noble Audio 6C were a fantastic pairing with the Sustain84 and the combination was simple sublime. The sound was smooth and forgiving, yet extremely detailed. The excellent imaging and deep soundstage of the Sustain84 worked well with the 6Cs at reproducing the music and eliminating the typical “in your head” feel of IEMs, it was quite immersive and high resolution albums like Pink Floyd’s Wish You Were Here were able to be fully appreciated as I was able to just close my eyes on “Shine On You Crazy Diamond (Parts I – V)” and the music just came to life, the saxophone solo at the end was just incredible, so soulful and the tubes really made a difference versus just plugging my IEMs into my Chord Mojo’s headphone output.

The Sustain84 is not the most powerful amplifier in the world, though it is certainly capable of driving planar-magnetic headphones such as the LCD-2, LCD-3, LCD-X and some of the easier-to-drive headphones from HiFiman. Although it sounded crazy, I decided to try driving my HE-6 with the Sustain84 and of course, 1 watt of power will never do these headphones justice, but I was surprised at how well the Sustain84 was able to drive these headphones. I was able to reach fairly high SPLs (about 93dB which is my louder listening volume) without any distortion and there were almost no signs of the headphones being underpowered. The HE-6 were warm and full-sounding, with the treble perfectly tamed, and a full-bodied midrange, it was perfect! The bass however, was somewhat loose compared to what I’m to hearing with the HE-6 and there was a slight loss of detail since the power hungry HE-6 drivers don’t really open up without a more powerful amplifier. Still, the Sustain84 surprised me with its ability to handle hard-to-drive headphones and it was better than what many tube amplifiers can do.

The Sustain84 holds its own quite well when compared to more expensive amplifiers such as my Woo Audio 5. Although it doesn’t quite have the same effortless liquidity and micro-detail retrieval, it isn’t too far off and transparency is only slightly less; certainly not noticeable unless you really look for it. The big difference between the two here is in the different sound of the tubes. The ECL84 tubes are warm and dynamic, whereas the Woo’s 300B and 6SN7 tubes provide a softer and more ethereal sound. The Sustain84’s strengths lie in its midrange, which is one of the best I’ve heard out of any tube amplifier and combined with its dynamic, more than make up for what the Woo does better. The Woo is simply too slow and relaxed sounding for some genres of music, it isn’t as fun to listen to! Even though the Woo is able to resolve notes better, it lacks the dynamics and forwardness of the Sustain.

Overall, the Sustain84 is priced just right and the perfect amplifier for those looking for a bedside rig or office amp. The sweet, seductive midrange and smooth treble allow it to easily pair with a wide-range of headphones and its ability to drive IEMs without any noise make it that much more versatile. This amp rocks!