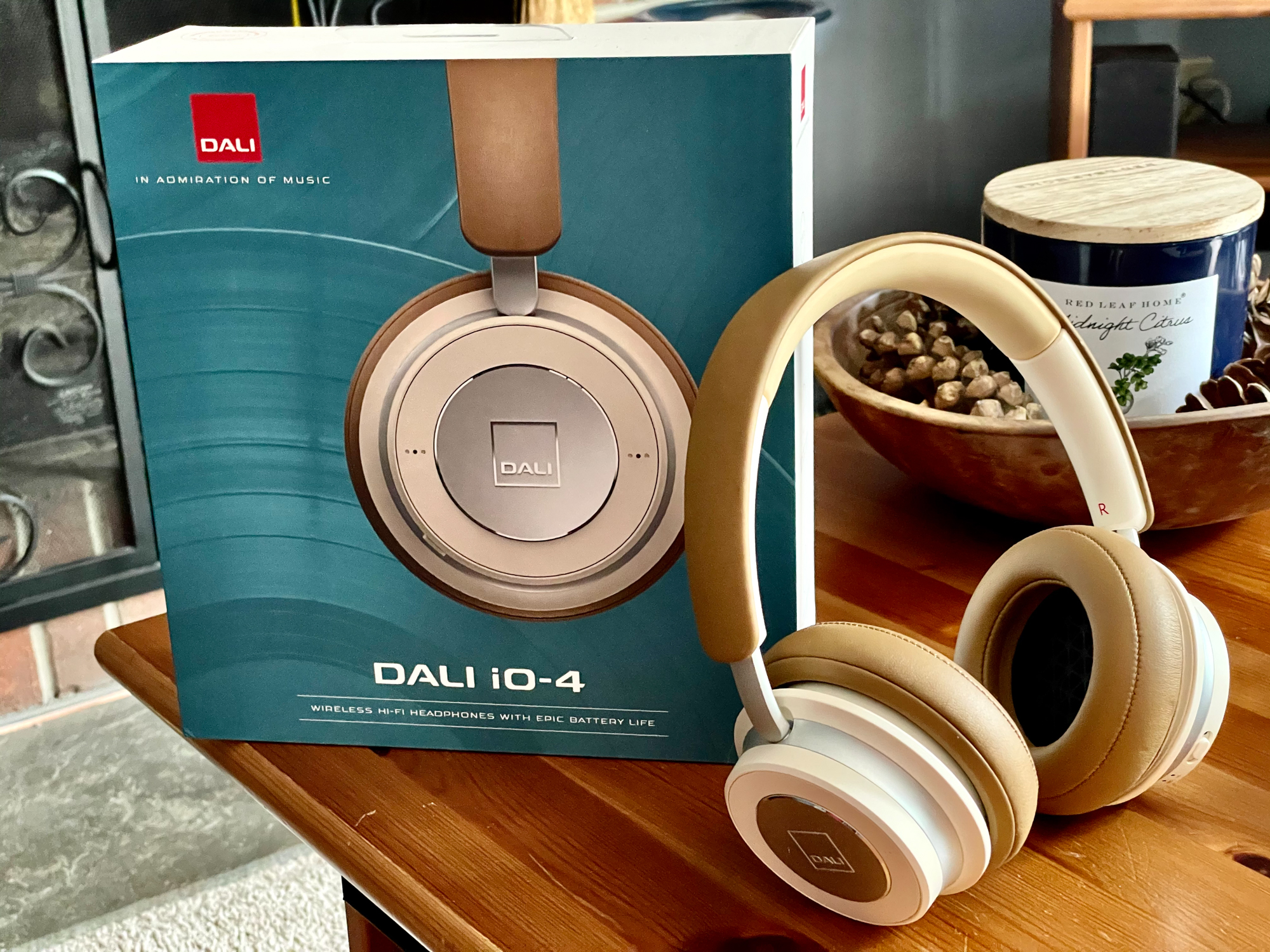 My first experience with the DALI IO-4 headphones was at the New York Can Jam in February 2020…days before the country locked down. I wrote at the time that the IO-4’s were very comfortable and had solid bass response and that I would look forward to writing a more extensive review. We got the call from Lenbrook, the parent company for the DALI’s, requesting just that, so here we are.

The DALI IO-4’s arrived in quality, if sparse, packaging. No wasted space, but everything you need to keep the ‘phones safe…very Danish. Inside, I found a Quickstart guide and assorted cables (1/8” to 1/8” for wired listening through an external amp and a USB cable for charging OR wired listening through the internal DAC/Amp). No case was included.

I gave the IO’s an overnight charge before listening. The power-on voice confirmed that the battery was at 100%. The specs claim a 60-hour battery life…I’m confident that this is actually understated. I’ve listened for approximately 35 hours and currently, the battery stands at 60% full.

The IO-4’s use a 50mm paper fiber cone driver. There are many headphones using a similarly-sized driver, so it really comes down to the implementation of the cups, amp, and DAC.

Pairing the Bluetooth with my iPhone (AAC codec) and my laptop (APT-x HD codec) was as easy as can be. The controls on the outside of the right ear cup were easy to feel and gave a satisfying ‘click’ for physical feedback. The central logo button provides play/pause/answer functions as well as next track (double click) and previous track (3x click). When paired with the phone, the volume control adjusts the phone’s output, so you can adjust it from the headphone or from the phone with identical results. As I mentioned, at power-on a voice comes through the headphones telling you the remaining battery life. Recharging from empty to full takes about 2.5 hours over the included USB-C cable.

Since DALI states that…“The DALI IO-4’s are intended to be the perfect travel companion for those ‘on the go’ situations.” I did most of my listening in those environments. From car and train rides to cutting the grass. Sadly, plane rides were not an option, because…well…you know.

Upon putting them on for the first time, my initial reaction was that the synthetic leather-over-memory foam earcups were super comfy if a little small to be called over-ear. Despite this, they gave an excellent seal and solid physical isolation. Riding as a passenger in a car or on the train, the isolation was great…to the point that I was concerned I would miss the announcement of my stop. There was still some road noise in the background when there was no music playing, but that never intruded while listening, even at a lower volume. Twice I used these while cutting the grass. No, they didn’t completely block out the gas-mower sound, but they reduced it enough that I did not need to pump up the volume to enjoy the music. If you need even greater isolation, you’ll want the IO-6’s with their active noise cancellation…but expect a tradeoff on the battery life. The IO-6’s spec out at 30 hours…half that of the IO-4’s.

Listening via Bluetooth connected to the phone:

This is how I expect most commuters will use these, so it constituted the majority of my listening. Since Apple STILL doesn’t support APT-x, I used their AAC codec, which is supported by the IO-4’s.

My initial impression was that these are exceptionally accurate in their tonality. I wasn’t hammered over the head by any one section of the tone curve. I was pleased since this is my preferred style.

Some of my specific notes included:

-Bass was never bloated nor slow.

Peter Gabriel, In Your Eyes, So (2012 remaster) via Qobuz

-This notoriously bright recording felt extended, but not overly edgy.

-Sibilance was, however, still notable.

Peter Gabriel, Love To Be Loved, Us, via Qobuz

-Drums were better, with the Kick Drum fully fleshed out.

-None of the edgy brightness

-Voices were focused and clear without being overly forward.

-This very dynamic song was well represented, albeit not quite as ‘chest-smacking’ as I’ve heard it.

-Kick Drum and Bassline were a little lean

-Great layering, even during complicated passages

My overall impression after listening via Bluetooth over the phone was that as an on the go headphone, the IO-4’s were accurate, detailed and that the choices that DALI made on the bottom end were right…they sacrificed some bass extension but ensured that the bass that is there is tight and fast and never bloated. The decay is well done and never slow or flabby. The midrange runs neither warm nor cold and the treble is extended while avoiding most of the brightness that plagues many headphones in this price range.

Listening via Bluetooth from MacBook Pro 16” with APT-XHD Codex

I’m a commercial photographer by day, which means I spend hours in front of my computer editing photos. This affords me time to enjoy and evaluate headphones, but definitely places a premium on quality of sound and comfort. Regarding the latter, I can say that these are very comfortable. They are light enough to wear all day, the cups, while a little small for my big ears, are very soft. I never felt like my ears were pressed up against the inner mesh. They were very easy to adjust and stayed just as I set them without any need to re-adjust.

As to the sound, my notes were as follows:

-Yeah, I know, but no review is complete without giving this old standby a listen.

-As with the phone, the bass is taught with no sense of overhang, but the headphones fail to delve the deepest depths.

-The treble, on the other hand, was more resolved and subtle. Great detail and extension and zero edginess.

-The midrange was delightful, with no sense of over-exaggeration.

-Good sense of scale and space, but the image never extends outside the head

-Treble never sounds ‘audiophile’ bright, but rather is smooth and extended

-Rumble of the timpani is well done.

-The piano is glorious…dynamic yet smooth.

-Bass is tight with nice decay

-The attack is very dynamic and crisp

-All about the midrange.

-That glorious voice is so well produced!

-The fiddle is well placed in the soundstage behind the vocals

Conclusions on BT listening via the laptop are that APT-x beats AAC in the treble subtlety and detail and the IO-4’s are capable enough to demonstrate the differences.

Listening in passive ‘Off” mode using the mini-jack to mini-jack via external amplifier.

Since it’s possible to bypass the Bluetooth, DAC, and amplifier and see just what the drivers themselves can do, I did just that. I hooked the headphones via the included passive cables to 2 amplifiers, the Schiit Vali 2 ($149) being fed by the Schiit Modi Multibit DAC ($249) and the Ampsandsound Kenzie Ovation ($3,800) fed by a Schiit Bifrost DAC ($699). The source for both was the same MacBook Pro connected to the DAC’s via USB.

-Used this track to compare to the Bluetooth

-OK! This is a move in the right direction! Better deep bass extension and a little (but not too much) added warmth to the midrange.

-Better punch to the dynamics

Peter Gabriel, In Your Eyes, So (2012) via Qobuz and the Ampsandsound amp

-This amp is unashamedly warm and lush and it shows through the IO-4’s.

-Even so, this sibilant recording was…well…sibilant. But that aside, the treble was smooth

Chick Corea, How Deep is the Ocean (Live) Trilogy 2 (Brian Blade and Christian McBride) via Qobuz and the Schiit Vali amp

-The acoustic baseline is wonderfully fleshed out

My conclusion regarding the Passive listening is that the DALI’s are a very capable headphone for many circumstances. By that, I mean that they have the ability to stand up to all-passive headphones that cost more when hooked up to an amplifier. This means they can be, for many, a true one-headphone solution. It also means that when you’re at home or at work and can abide the inconvenience of listing while wired up, that’s the best way to get the most out of the IO-4’s.

My overall impression after many hours of enjoyable listening is that the DALI IO-4’s are an accurate, dynamic headphone that will satisfy a large swath of the market who are looking to hear what the producers intended. They are not a bass-head’s dream, nor are they ideal for those looking for that ‘audiophile’ sizzle. I very much appreciate the choices DALI made on the bass end…choosing fast and tight over bloom and bloat. By limiting the attempt to delve into the deepest bass regions, they ensured that the bass they played was musical and taught.

As to the ergonomics and aesthetics, I think they hit the ball out of the park. The controls are well thought out, the feature set is complete, the passive isolation is good, the comfort level is high, the battery life is epic and the looks are distinguished.

If you’re looking for a true-to-the-music headphone for home and on the go, you owe it to yourself to audition these!