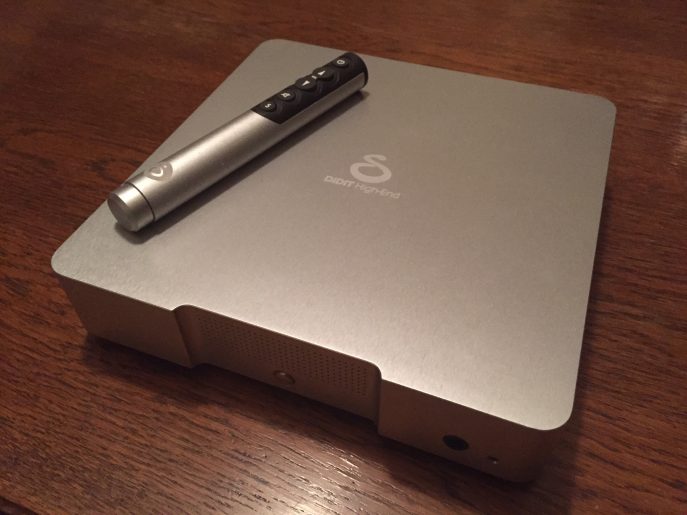 DiDiT High-End (Different in Design, Different in Technology) is a Dutch audio gear manufacturer located in Nederhorst Den Berg. According to the company website, it was established in 2007 and the main team consists of four people: Patrick Schoon, Rients Steenbeck, Roy van der Hulst, and Sebastiaan de Vries. All of them seem addicted to audio gear and have a significant knowledge.

The DAC212SE is completely designed by the company itself. Roy is the person behind the technical drawings and the design elements, while Sebastiaan and Patrick coordinate the electronic design. It seems to be an excellent division of tasks. In order to learn more about the team, please click here to read the short biographies.

The chassis is manufactured at the company that also produces Kharma Loudspeakers’ chassis. The DiDiT team determines the electronic assembly in house and the final results are obtained in their test facility before releasing units to customers’ hands.

In the product line of the company, there are the DAC212SE (Signature Edition), the RCA version of the DAC212, the AMP212 and the STREAM212. According to the information that I have, the AMP212 and the STREAM212 will be completely ready to launch in the near future. The company also offers an interesting risk free trial for 14 days. To get more information about that opportunity, please click here.

I have to say that the customer relations of the DiDiT team is simply excellent. I have been in contact with Rients Steenbeck from the DIDIT team and he usually replied my e-mails within hours. He was friendly, extremely helpful, and responded satisfactorily to my questions. In that regard, I would like to express my special thanks to Rients.

Considering the general look of the 212DACSE, it can be seen that the DiDiT team maintains a ‘’compact’’ and ‘’luxurious’’ design approach. Indeed, the DAC212SE has a very chic squared chassis, which is made from a high-grade aluminum.

On the front side, the DAC212SE has a promising and cool Matrix reddish display as well as a capacitive touch button for powering the unit and switching between inputs. Besides that button, the unit comes with an aluminum-bodied remote control that is used while turning volume up/down, selecting source, and making advanced settings. Also, the DAC212SE provides a 6.3mm headphone output that has a level of performance comparable to its impressive sounding DAC board.

On the backside of the unit, there are HDMI, coaxial, AES/EBU, USB, and optical inputs as well as XLR outputs that are unique to SE version of the DAC212. In contrast to the first DAC212 that has only RCA outputs, the DAC212SE provides only XLR connection. According to the company, most customers prefer XLR connection to RCA in the high-end audio world. To accommodate this, the DAC212 has a true balanced configuration and a true differential design from the input to the output. While designing and making the SE version, they decided not only to implement XLR connectors, but also they added a few class-A buffers. There is no doubt that the conversion to the ‘’true’’ balanced XLR version and the redesigning of the electronic assembly is the consequence of hard work.

The lack of RCA outputs may be considered a problem at first sight, but DAC212SE takes full advantage of both providing the XLR connection and being compact in terms of the dimension. Needless to say, the DAC212SE can be also used with RCA to XLR conversion adaptors. Moreover, the XLR outputs can be turned into unbalanced outputs via the software inside.

The DAC212SE  also has a Bluetooth connection to receive streaming and IOS/Android signals. The DiDiT team has no exact preference regarding the inputs which can be virtually configured in several different ways. I tested the optical and USB inputs as well as the Bluetooth connection; I got the best result from the USB input, which is the smoothest one.

According to the user manual, the DiDiT team highly recommends using the DAC212SE with a connection to a ‘’three pin earthed’’ socket to get the best result from the special design inside to separate audio and power signals. Use of a truly earthed socket, which is connected to a copper plate buried into ground, improves both the safety of the unit and the prevention of noise caused by the electricity.

The CNC machined chassis looks very premium and ‘’high-end’’. It has a perfectly compact chassis type, with an extension on the top, which covers the inputs and outputs which can be described as the finalizing part of the chassis design, but I wish there could be another solution to provide a less challenging cable connection. Still, I was told that the DiDiT team has not gotten any negative feedback about that design approach so far. In addition, both the DAC212RCA and SE versions have three specially designed stainless steel feet to reduce the resonance in the body.

In general, the DAC212SE sounds airy and breathable as well as detailed, but not fatiguing. It places details into music very well by creating a slightly open toned presentation and it provides a strong and powerful midrange.

The low frequency of the DAC212SE has a very high level of quality. Lows are not very prominent, but they are quite controlled as well as tight and there is very impressive attack/decay timing ability. The low frequency never overcomes other frequency ranges and it is released in a very clean and clear area as related to the rest of the spectrum.

The DAC212SE may not be very satisfying for those who want to hear a dominant bass presentation, but it sounds stellar in terms of maintaining an intimate tone and an impressive resolution. The detail level is quite high in accordance with the overall cleanliness and it reproduces sudden note changes in the low frequency area quite well.

The DAC212SE is a unit that has an impressively resolving and transparent midrange presentation, which reveals excellent lower harmonics. In contrast of many units in the market that create body by using the mid-bass presentation, the DAC212SE provides a unique instrument authority, which is a result of the high resolution and the richness of the midrange. It is not lean, but neither too full-bodied which can be boring at times. Additionally, the overall tone can be considered as slightly ‘’open’’, but it never carries metallic or fatiguing notes.

The vocal presentation is also quite impressive due to the DAC212SE’s overachievement in releasing three-dimensional and highly resolved notes. Indeed, the unit recreates vocals’ emotions, feelings, and details in a natural and effortless way.

On the other hand, it is not ‘’very’’ forgiving of bad recordings. The DAC212SE relatively brings recording errors in treble sections out and seems like saying ‘’Hey, I deserve some better recordings!’’

The DAC212SE provides an airy and breathable stage. It doesn’t have an overly wide one; the width size is just as it should be. It also maintains an impressive layering as well as a three-dimensional atmosphere pursuant to the stage depth. There is an extremely black, clean, and clear background; correspondingly, the separation performance is intriguing.

Both DACs have intimate midranges, but that intimacy is not fatiguing on both. While the DAC212SE provides a little open tone and adds slight warmth to the presentation, the DP1 seems to sound a bit more natural in comparison. On the other hand, the DAC212SE has definite resolution superiority over the DP1. The midrange is the strongest part of both DACs, but the DAC212SE is an absolute winner with its richer and more transparent presentation.

The DP1 has a wider stage, while the DAC212SE maintains a deeper one with a better layering ability and more three-dimensional instruments. Lastly, the DAC212SE sounds more airy in accordance with its general tuning logic.

The sound reproduced by the DAC212SE makes me feel that the DiDiT team spent a serious amount of time for tuning and worked hard to enhance the overall quality. In general, units in the market have some issues in frequencies, which are tuned knowingly or unknowingly. In the DAC212SE case, all parts of the presentation from lows to highs seem to be elaborated and seriously invested in.

Without a shadow of doubt, there are other DACs in the market that perform better than the DAC212SE. However, it maintains an impressive resolution performance, which is beyond its price range and able to be seriously competitive with some more expensive DACs.

The DAC212SE is a compact and luxurious digital to analogue converter that hosts all popular input types in the audiophile world. Considering its look, size, and sound quality, it is clear that the DiDiT team seems to know what they do and how to tune sound. The DAC212SE is not a unit designed by chance.

Note: Some pictures are courtesy of DiDiT High-End.