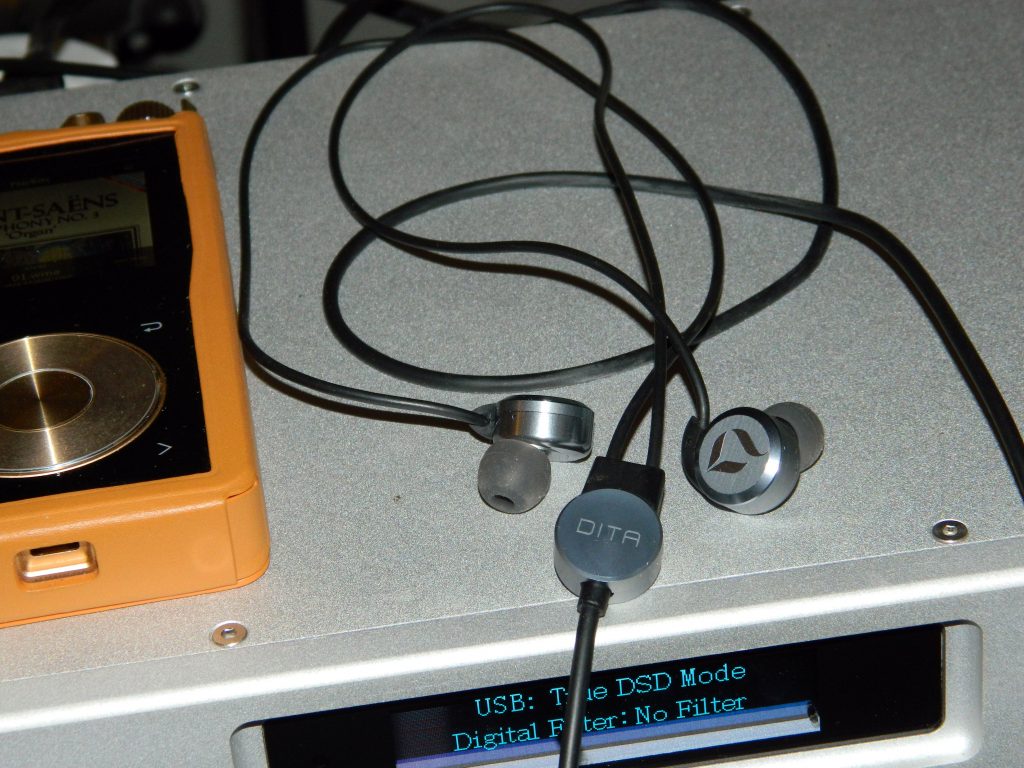 Engaging is the word that comes to mind when listening to DITA’s The Answer. In the never-ending crusade to find the ultimate in personal audio sound reproduction, The Answer is quite literally DITA’s answer to the question (the pun is implied in the name, so don’t blame me). In the last few years, the IEM market has exploded with innumerable offerings being tossed up as the absolute pinnacle of music enjoyment. In the face of the race to cram ever-increasing numbers of balanced armature drivers into exotic plastic cases, DITA takes a unique and rather ‘Old School’ approach, treating the IEM as a conventional loudspeaker, thus dealing with hurdles of accurate sonic presentation from the point of view of resonances, distortions, phase coherency and speed.

Operating under the philosophy that the cabinet has the greatest effect on overall sound quality, in order to control unwanted resonances (what they refer to as “box colorations”) the chassis is “meticulously milled and turned on modern multi-axis CNC machines from a solid block of 6061-T6 aluminum.” As to driver technology, they have chosen to use a single dynamic transducer, adopting the principle that the best way to maintain phase coherency and to eliminate crossover distortion is to use a single full-range driver. Once again to quote DITA “To fully exploit our ultra-rigid chassis, we needed to design a state-of-the-art driver that is ultra-lightweight, ultra-fast and rigid driver. The combination of both lightness and rigidity gives us a smooth and wide bandwidth response curve, along with stunningly quick impulse response.” But DITA doesn’t stop at the chassis and driver, they consider the cable to be a major factor in the sound and have taken great pains in the design and manufacture of their cables down to the use of Van den Hul silver solder and the non-magnetic carbon fiber TRS connector.

Which brings us to the question, does all this fine attention to detail pay off.

Opening DITA’s The Answer was a delightful exercise in class without leaving you feeling they spent more on packaging than product. Along with supplying all necessary adaptors and an ample selection of tips, DITA provided both a conventional EVA molded zipper case and an elegant leather case.

I personally tend to have a problem getting a seal with universal IEMs and for long term use, I would probably opt for custom tips. That being said, I was able to get a good seal using the standard tip for my left ear and a small provided black tip for the right. Once I got the trick of inserting them (this involved a bit of rotating them to get them to align with my ear canal), I found I could comfortably listen to them for many hours.

After a week of burn-in (I decided not to influence by impressions by listening to them fresh), I spent a couple of days simply listening to The Answer, just to get a feel for their characteristics. I then moved on to serious listening beginning with Robert Shaw’s performance of The Firebird Suite playing through the Questyle Audio QP1 portable DAP. The tonal balance was excellent, clearly enunciating the strings, horns, and woodwinds as individual instruments. I moved on to Reference Recordings’ DSD track of Eiji Oue’s performance of The Firebird Suite. It might seem strange to listen to two recordings of the same piece, but while Robert Shaw’s is the superior performance (my single favorite classical recording), Reference Recordings is the superior recording, and so I learn different things from them. The sound stage was huge and the subtle interplay between the oboe and the French horn was exquisite. The attack and timbre of the tympanis were breathtaking as well. Listening to Liz Story’s Wedding Rain, The Answer provided a large bright hall, lending a Steinway-esk pallor to the piano, delicate and fast.  Billy Joel’s The Ballad of Billy the Kid again offered a deep soundstage and excellent instrument placement while hinting at The Answer’s true strength, vocals. I confirmed this with The Bob’s performance of Psycho Killer, it was as if the four were standing there in the room, OK, more like they were standing in my head, but the point being, the voices sounded natural and unamplified.

For a speed test, I turned to Mahavishnu Orchestra’s Birds of Fire. With eight concurrent melodies, it is a trial for any speaker, headphone or IEM in both dynamic range and speed, The Answer passed without sweat.

At this point, I switched to the Questyle CAS192 DAC and CMA800R Current Mode Headphone Amplifier combination to see if I could make The Answer truly sing. The first thing I noticed was The Answer really brought out the advantages of the CAS192 with its Wolfson WM8741 over the Cirrus Logic CS4398 in the QP1, providing yet, even more, air, detail and nuance.

While still upfront and in your face, Beck’s Paper Tiger was smooth and mellow rather than harsh and aggressive as it often appears, and Liz Phair’s Polyester Bride was so intoxicating, that I wanted to listen to it over and over. What probably impressed me most about The Answer was how they reproduced the haunting tones of Pink Martini’s rendition of Que Sera, Sera, which instantly brought to mind that the song was originally written for a Hitchcock film.

Leaving me with the question, would The Answer be too analytical for a cell phone. So into the Samsung, it went with Regina Spektor on Rhapsody and the results were pleasant and musical.

DITA’s The Answer IEMs give you the sound you expect from a pair of audiophile speakers, sweet and detailed, with a large soundstage and lots of air, and extremely natural tonal qualities. But like many audiophile speakers, they don’t hit you over the head with bass. I was not completely satisfied when playing old live rock recordings like Woodstock (which were shy on the bass to begin with), whereas jazz pieces like Jaco Pastorius’s Portrait of Tracy were magical. If you’re a true bass head, looking for a lot of subsonic rumble, The Answer may not be for you, but they are still worth a listen. What they don’t do is anything offensive, despite being fast and airy, and while they definitely benefit from better equipment, don’t be afraid to pull out the iPhone or Android for a little streaming nirvana.