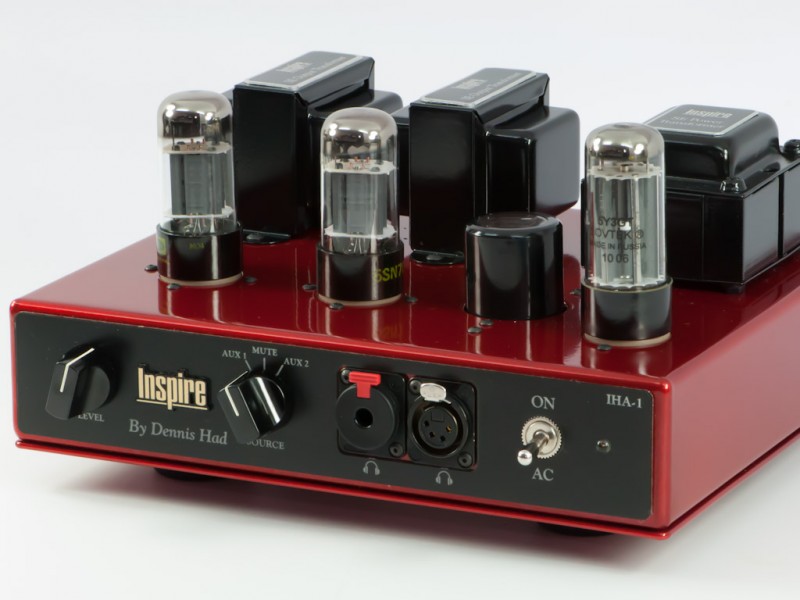 Back in 1997 I visited my brother-in-law in Rochester, NY and not having much to do (because of the frigid weather in the region) we decided to go listen to some high end gear in a few local audio boutiques. Two-channel audio was king in those days and I had been looking for a new amplifier, so we decided to venture out and explore.

There was a shop in Rochester that was carrying B&W speakers and Steve McCormick’s DNA amplifiers. We made that our first stop and it became my first introduction to an amplifier designed by Dennis Had. The main system was playing Holly Cole. The speaker was a B&W floor standing model. The vocal was seductive and lifelike. The baby Cary 300B mono amplifiers were being used in the system.

I remember that the sound was liquid and palpable and was unlike anything I had ever heard or experienced before. Little did I know at the time it was the beginning of a love affair with tubes (and that passion still burns in my heart and soul as strong today as it was then). The amplifier really made realize what was possible in music reproduction. The baby mono amps were priced at $3500 pair (not inexpensive) and unfortunately were not in my budget at the time.

When Drew Baird (of Moon Audio) had told me that Dennis Had was coming out of retirement and was inspired to do a headphone amplifier, my head start buzzing. Those feelings and fond memories of those early day auditioning the Cary sound immediately came to mind.

Dennis Had has been building and designing amplifiers since he was a young boy. His time with Cary produced products that are in still in production today and have achieved a legendary status. The newly created Inspire Dragon is old school in design philosophy. Dennis believes in single-ended topology in his designs and still builds amplifiers the old-fashioned way; using simple circuits and minimal parts. The Inspire IHA-1 Dragon was designed after Dennis realized that there were lot of people using headphones and the designs had matured to where they needed good and clean amplification to bring out the best sound and musicality. After listening to various headphones, Dennis became so excited and decided to build his own amp. 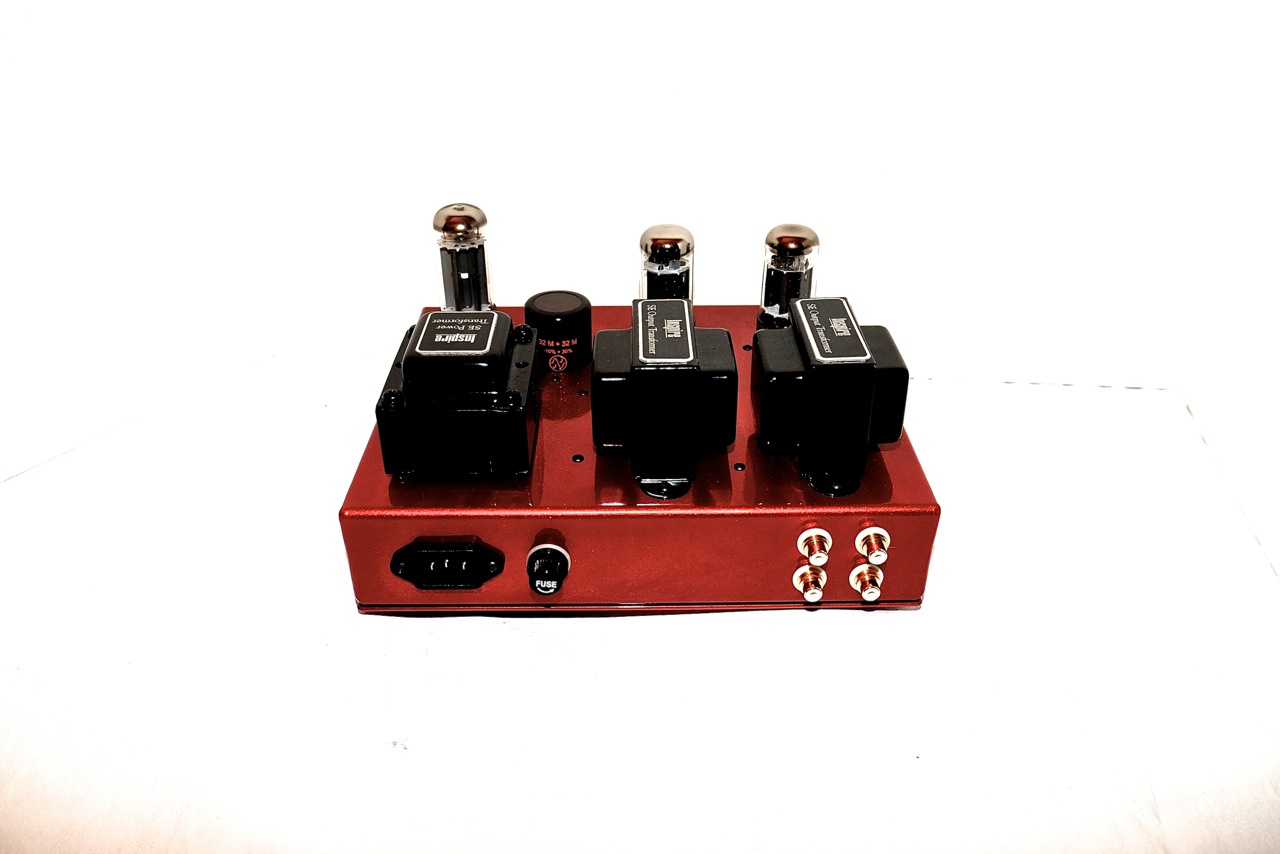 The Dragon IHA-1 is a simple circuit that Dennis designed to provide the purest output available. There are no parts in the signal path. The amplifier sports two 6SN7 driver tubes driven by a 5Y3GT rectifier. The rectifier acts more like a power tube. The features of this amplifier are available from the Moon website and listed here: http://www.moon-audio.com/headphone-amplifiers/dragon-inspire-iha-1-tube- headphone-amp.html.

The amplifier is is painted in a high quality clear coat attractive paint finish that resembles a fine Merlot. The Dragon has a DACT 100K attenuator that runs a pair of 6SN7 tubes and puts out 1W of power. The Electro Harmonic 5Y3GT rectifier is included as part of the standard tube package, which also includes two Russian 6SN7. Tube rollers will be able to substitute any 5U4 type rectifier or 274B tube.

There are two headphone outputs in the front. One ¼ inch singled and a 4-pin XLR output as well. The amplifier is transformer coupled allowing for the use of just about any dynamic or planar headphones available today. The amplifier weighs a hefty 15 pounds.

The Dragon was setup with the Chord Hugo driving mostly lossless files from my iMac. The majority of my listening was done with my LCD X and HD 800. Also used were the Hifiman HE560 and the Alpha Dog planar headphones. The Oppo PM-1 saw some listening time as well. The Dragon volume control was used with the Oppo BDP 105. While using the Hugo as a source I used its digital volume control. The Hugo had sufficient gain and was able to drive the Dragon to loud levels.

Michael Buble’s “Close Your Eyes”, from the album To Be Loved, is a beautiful song. The track immediately will draw you in with its wonderful lyric and the song is a personal favorite that reminds me so much of my wife. Michael vocal is pristine and the Inspire Dragon made me feel the song. I became intensely involved with the lyrics.

The Dragon emotionally drew me in and had me thinking of that special person who is so important in my life. Buble’s voice is inspirational and brought tears to my eyes. I completely forgot about the gear and connected emotionally with the lyrics. Shelby Lynne’s vocals on “Just a Little Loving”, is well recorded and the vocal is one of my favorites in evaluating amplifier performance. The Dragon was articulate and had her vocal centered in the front of the soundstage. Shelby voice was clear and had body and you could feel her delicate and deliberate phrasing while singing this beautiful track.

The Dragon, utilizing the stock rectifier with the upgraded Sylvania 6SN7 chrome top tubes, delivered the right amount of texture. The sound was clean and dynamic. The bass line was very identifiable with the Electro Harmonic rectifiers. Using the Sophia 274B, I felt that the bass was not as defined and far less dynamic. The Sophia tubes were simply less enjoyable. 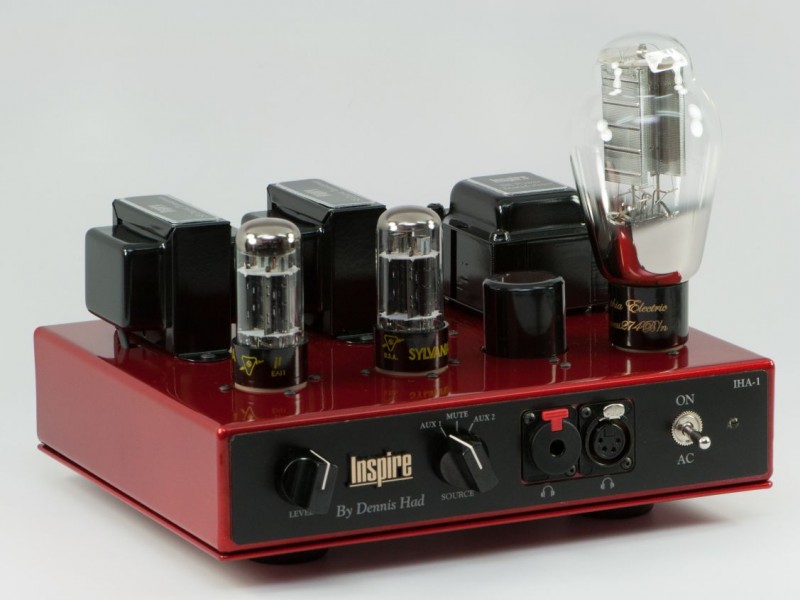 The midrange delivery of the Dragon is classic “Had” design. I was transported back to that time in Rochester when I had first heard the magic Cary 300B sound. This amplifier has that wonderful midrange tonality. Listening to Chris Botti’s trumpet on Impressions, “Prelude No. 20 in C minor” has that rare sense of “you are there” feeling. The trumpet was dead center and slightly up front with air around the instrument, which made it stand out in the performance.

Closing my eyes, the performers around Botti were defined and focused in their own space with excellent separation. The delicate lyrical tonality of his trumpet was all there. The instrument sounded live and realistic. There were no artificial or electronic glare or glaze. The music was so delicate and inviting and the Dragon brought out the best in Botti’s performance.

On the second track “Per Te”, with Andrea Bocelli, I became focused on the trumpet in the opening of the track because it was so delicate. The tonality was beautiful and absent were any hard or harsh sounds coming from the trumpet. The trumpet started to fade and Bocelli’s vocal started coming in and was inspiring. The beauty of the lyrics, although sung in Italian, felt universal as the Dragon disappeared into the music. All that was left was the beauty of Bocelli’s vocal and exquisite musical tonality. Never did I feel there was anything missing, the midrange was special and the treble was also musical. The magic that tube amplifiers provide with tonality usually is only heard in live performances. And the Dragon had that magic. 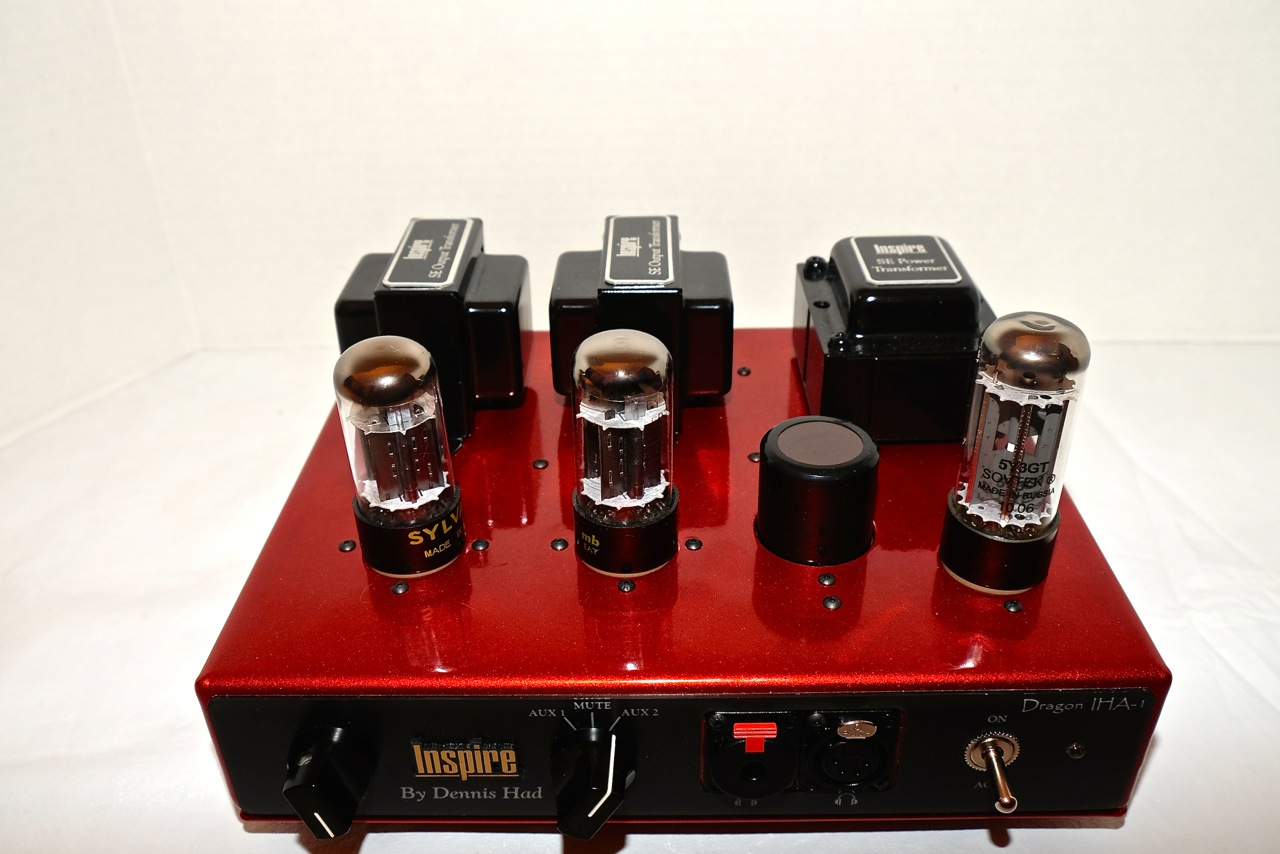 Bass with the Dragon is excellent. The use of the stock rectifiers brought out a well-defined and tight bass. Much more than the Sophia 274B rectifier, which I found, was a little light in bass delivery. Kenny Barron’s, The Art of Conversation, has Dave Holland playing acoustic bass. On the opening track, “Oracle”, I could hear the texture of the bass notes with excellent extension and definition. The instrument was focused and spooky in realism while rendering its own space within the soundstage. There was separation and space between Holland bass and Barron’s piano. Kenny was to the left and you could hear and feel his involvement with the instrument as his hand was moving across the keys and Holland’s bass was in its owns space and had excellent extension.

Pat Methney’s masterful work with Charlie Haden on Beyond the Missouri Sky – an album filled with terrific melody and tonality – is exceptional. Pat acoustic guitar is beautifully placed in the forefront and his delicate playing on “Waltz for Ruth” is something special. Haden’s bass is almost behind Methaney and on some lesser equipment it is hard to notice the separation of the two performers.

The Dragon did not disappoint in being able to distinguish the separation and I was able to visualize some distance between the performers in the soundstage. Haden’s playing is exceptional and the Dragon was letting it all come through in a defined space within the soundstage.

Listening to large-scale recordings like Copland’s majestic Fanfare for the Common Man, the Dragon was able to deliver a terrific performance. It had sufficient speed and dynamics to make this track come to life. The performance was all there and the soundstage was layered and I could hear every section of the orchestra. The Inspire Dragon was able to make it a believable performance. The Dragon never clipped while playing this wide dynamic recording. Many amplifiers I have used have struggled in reproducing this track.

The Hugo volume control was being used with the Inspire dragon. I noticed I was getting more volume at higher levels with difficult to drive headphones. The Hugo added more gain and could drive the little Dragon to concert hall sound levels.

The amplifier performed well with any headphone. Whether I was using the Alpha Dog or the HD 800, the Dragon did not have difficulty in driving either headphone. The Alpha Dog can be difficult with some amplifiers because it is not as efficient as some other planar designs and loves power. The Dragon easily drove the Alpha Dog and is a synergistic and good match. 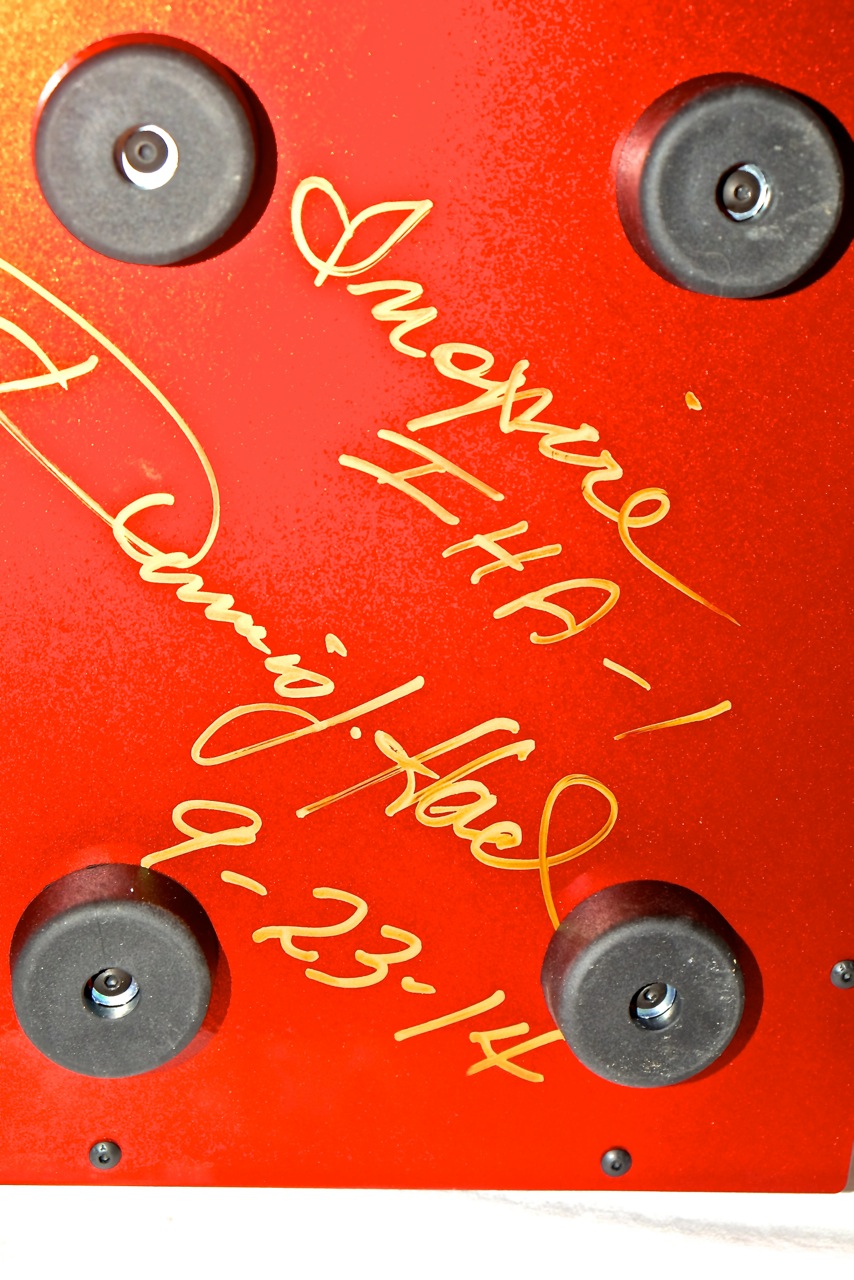 The time I had spent in 1997 up in Rochester audio boutiques had opened my eyes and ears to tube amplification. Dennis Had’s baby Cary amps forever changed my life with how I would listen to audio components. The sound was more musical than any solid-state amplifier I had heard in audio at the time. The sound was magical and for me made me want to explore and eventually purchase tube amplification.

My lifelong love affair with tube amplifiers is still as strong today as it was back then. The Dragon delivers clean sound with nothing getting in the way of the performance. The musicality and tonality of the amplifier is there with nothing left out. The design is simple with no parts in the signal path and nothing in the way of musical delivery. Headphone enthusiasts can utilize just about any efficient headphone with either a XLR-4 or singled ended cable. The Dragon delivers for me everything I look for in a good tube design; it always had me involved and never left me wanting for anything during my listening sessions.

The Return of the Legend was well worth the wait as Dennis Had has brought an affordable music lover’s product to the marketplace. So if you want to see what the fuss is all about with the Dennis Had design, call Drew Baird over at Moon Audio to arrange an audition. The Dragon is the triumphant return of a masterful artisan designer and is highly recommended for any music enthusiast. It’s a well-designed product that offers both performance and excellent value and an easy recommendation.

Thanks to Moon Audio for lending us the amp for review.