ENCORE MDAC: CAN WE PLAY IT AGAIN? 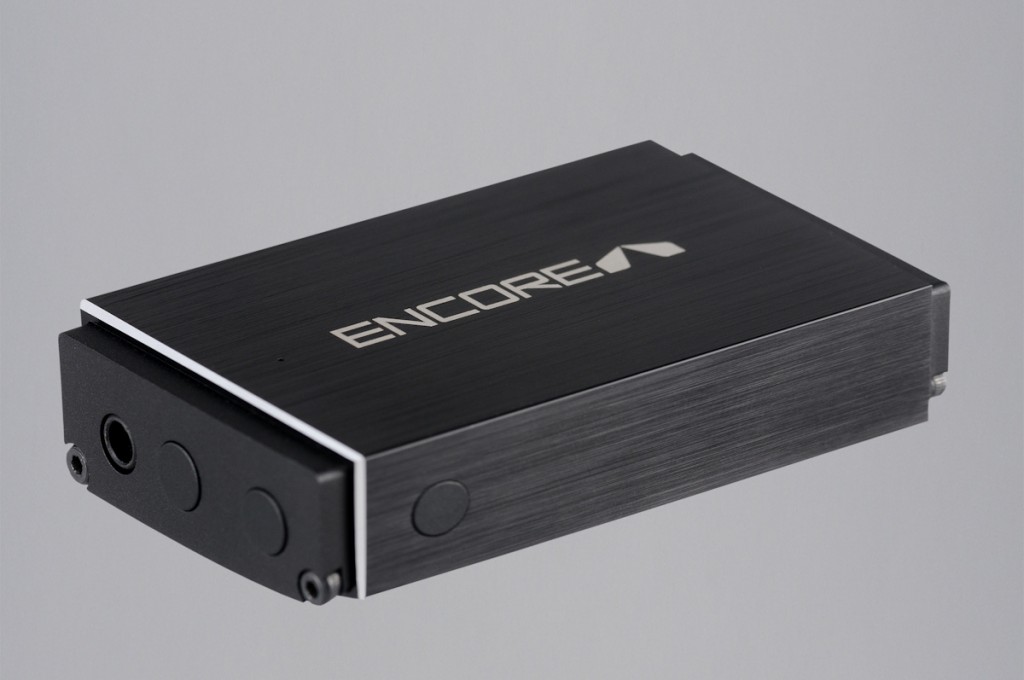 The mDAC ($129 MSRP/$99 Street) – from the new company Encore – is a portable asynchronous USB DAC and headphone amplifier built into one small package. The purpose is to offload the audio processing function from your computer or smartphone onto this device whose purpose is what I call audio awesomeification.

So who are these guys? Well for starters, Encore is a new entity created by the former founders and staff of NuForce, a company that had massive expertise in this field (eventually they were bought out). So what are we left with? Well, we have a group of like-minded people who have expertise, a drive, and the real-world connections to get some real audio jives rolling again.

NuForce has left a real mark on the mDAC. For one, it uses Nuforce’s Reference NF DAC8 chip as its main digital-to-analog converter. This is based off the ESS Sabre ES9023 with improvements of course. The guys behind the mDAC have expertise with this chip and so it was pretty natural it was selected. Considering the hype and love around Sabre based units, I can definitely see why this decision was made.

The Encore mDAC is pretty much an artistic box that looks nearly too good to touch. I’ve honestly never seen a unit as pretty as this thing. It’s rectangular based with prism like angles on the edges and a blend between a CNC’d look on the outer rectangle and a matte texture on the inner rectangle.

There isn’t much on the unit itself. The top has the company logo silkscreened onto it and a status light. The frontal side handles the two volume buttons and a headphone jack. The rest of the sides have just the power button on one and a charge and input USB slot on the back: A utilitarian look with no words written on the sides. Flip the device over onto its back face and it’s another story. All the instructional symbols are located here. Overall, it’s a nice design that keeps a clean look to the unit while having enough instructions on the bottom to let the user know what it does on the first handling.

While the unit is one of the best I’ve ever seen in terms of looks, it misses a few points on usability.

To start out with, the unit has two USB ports on it. The device cannot be charged from the ‘input’ port. This is most likely done on purpose so that it won’t draw power from smartphones meaning more widespread compatibility for OTG or Apple based digital audio solutions. This makes it a pain however as you will sometimes end up with a double Frankenstein USB charge and input solution to get more tunes; yes the device can charge and operate at the same time. It’s quite annoying, to say the least.

Then there is the volume layout. The device is petite; I’m talking smaller than a tin of Altoiods. Now imagine volume buttons flush to the side on the top of the unit. Now top off that imagination skill of yours with having this strapped to the back of a source DAP (much larger than the mDAC 95% of the time). Think of volume operation now. Yeah, it’s a massive pain to do so. This is especially pertinent, as smartphones are getting larger and larger. I tested the unit portably with my 5.5” OnePlus One and it’s not an easy combo.

Also, the status light needs to be larger. The pinhole status indicator is honestly 1-2mm in diameter. It changes color depending on condition and on/off status. Considering this is a portable unit, you won’t always have it in view or remember if it was on or off. It’s near impossible to see the light or what color it is past a 45-degree angle from the unit. This means your head (if the unit was laying flat on a table in front of you) needs to be at least 12 inches close or you can’t even see the light, and six inches to see the status of it. Thankfully, it’s not something critical, but it is something I found annoying.

Lastly, and the biggest issue of all, is that the mDAC is having a midlife crisis. The device is best used as a desktop unit, like the FiiO E10/K. It’s miniature, easy to operate when flush on the table, great eye candy, and with the ability to plug as many USB cables into the back as you want when it runs low on juice. I gave the unit some time portably, but I liked it best when it was sitting on my desk. Ditch the separate USB port or offer a switch to allow the input port to such in juice (like FiiO does) and we have a great desktop unit and a decent portable one.

The mDAC already excels beyond the mass percentile of devices in terms of build quality. But usability is far from impressive. It’s a bit conflicting in terms of how to use and thus, every little problem becomes amplified. I didn’t have any real difficulty with these ‘issues’ it’s just that the near perfect execution of a build really shows faults in the design when it’s not doing what you think should happen. You can honestly get past any of the usability qualms I have here such as the buttons (mount the device higher), or the light, and charging options and ignore them.

The question: How do you use this device? Well you can use it either at home with a computer or with a portable unit. Just remember that the device needs to be able to ‘output’ a digital signal through USB.

For a home computer: You just take the cable, and you plug it into your system. The device is USB Class 1 driver meaning that it is plug-n-play. Turn the device on by holding the power button and start rocking. Just remember that if the power gets low, you either need to stop using and swap cables to charge, or to get another USB cable out and charge it with the second port.

For an Android/Apple smartphone: You will first need an adapter. In the case of the gen 7+ Apple devices, you will need Apple’s newest Lighting to USB adapter. For older generations you are kind of out of luck unless you have a 30pin adapter that also has a USB output (mostly only available in desktop docks). For an Android device, you need to have a phone with hardware and software support for USB OTG (most major ones) and then a USB OTG cable. That’s it!

I’ve found that the mDAC has a balanced sound signature, a warmer low range, and a full vocal range.

The balanced signature of the mDAC was quite surprising to me when I heard it. The shiny metal body screams “cool” and for some reason I thought it would have a super large soundstage. In reality, everything went the other way. The sound is more cohesive than widespread; it’s also quite warm sounding with a thick bass. Listening to “Before my Body is Dry” from the album Kill La Kill OST really showed off the mDAC signature sound. The lead vocals were full and with life except with a more pronounced lower-vocal range. The moment the instruments came in, I truly heard the mDAC’s balanced signature. Whereas the FiiO X5 was more airy and separated, the mDAC featured everything closer (with space still) and with near equal tenacity. The unit is quite democratic in presentation. This allows the mDAC to produce a type of lifelikeness to the music that others force through boosting the vocals (to no avail). It was during the secondary refrain of the song that really entrenched this idea in. The strength and sorrow of the lines had a very deep production and it carried the rest of the song through.

Bass is like a secondary home to me and I was not expecting the level of bass this device had. It proved me wrong many times over. Whereas on tracks like “Dango Daikazoku” of Clannad OST the low end was tame, save the background percussion. On “Legacy”, from The Marshall Mathers LP 2, really showed the quality low end the unit could provide. Throughout the song, the low rumble and sudden percussion hits create a palpable addition to the song. It wasn’t overly boomy, but it did add a nice boost to the bass giving it much needed presence in the track. It acts as a double agent for the most part. When songs only have a bit of low-end, it gives it a bit more, and for those that have a lot, well, it’s time to jam, so turn it up. The only times I found it unsuitable was that the added lower rumble was distracting on Classical pieces that have ‘rolling’ percussion and thunderous drums.

The vocals really make the mDAC shine. I wouldn’t say they are at all sonically perfect or transparent, because they aren’t. But they are extremely fun and full for what they offer. For reference, I used “The Garden of Everything” from RahXephon: Pluralitas Concentio for a dual language mix of awesomeness. The vocals featured a very earthly timbre to them. They were ‘deep’, accentuated, and above all, slightly rounded than sharp. I’ve been noting that there is also a lower-vocal emphasis and this is pretty much universal on everything I heard. It was essentially ‘grounded’ and had a center of gravity while minding its own business. They weren’t the clearest or brightest tools in the shed, but they really made a lot of music fun, jumpy, and filled with life.

Concluding on the sonic section, this isn’t the epitome of transparency, not even close. But it packs a fun cohesive sound that really brings the music together. It gives music a real punch and it’s really the gift that keeps on giving as you can take it with you.

The mDAC struggles with identify but the price point and feature set make it worthy of consideration. Bring it with you on your transits or drop it on your desk, a versatile and good lucking unit for any situation. Encore has made a nice debut and I’m looking forward to where they go from here.