Enjoy the Music.com To Rebroadcast Our Live Stream Of Blues Masters At The Crossroads 2014 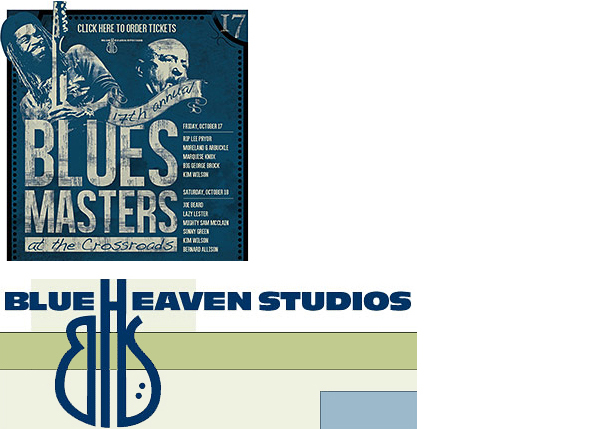 Enjoy the Music.com To Rebroadcast Our Live Stream Of Blues Masters At The Crossroads 2014

Blues Masters at The Crossroads concert featured many legendary musicians who, for the first time in history, were streamed online live before a worldwide audience!

(March 24th, 2020) The 2014 Blues Masters at the Crossroads event at Blue Heaven Studios, celebrating the 17th year as the preeminent authentic Blues concert in the world, featured performances by Rip Lee Pryor, Moreland & Arbuckle, Marquise Knox, Big George Brock, Kim Wilson, Joe Beard, Lazy Lester, Mighty Sam McClain, Sonny Green, Kim Wilson with Billy Flynn, and Bernard Allison. Taking place in Salina, Kansas, October 17th and 18th (2014) at a converted 1925 church sanctuary, the musical gospel continues to resonate within the walls of this historic building. To bring the ‘good word to the streets’, Enjoy the Music.com live streamed Blues Masters at the Crossroads for the first time in recorded history, so the world can see and hear the live sound of true, authentic Blues music during this momentous event.

“I think this is an awesome idea and want to thank you for both documenting Blues history and providing it for the world to watch,” said Chad Kassem of Acoustic Sounds and Blue Heaven Studios. “I hope it may bring some joy to people who watch it during this staycation due to the Cononavirus. Many of the Blues Masters performances throughout our 21 years of the concerts have passed away, but this recording will preserve their music forever. On a personal note, my mother had been to 20 of the 21 Blue Masters concerts and she was not able to attend 2014, yet because Enjoy the Music.com broadcasted it live she was able to watch it in Mexico!”

“Mere words can not describe the incredible musical performances during Blues Masters at the Crossroads 2014,” said Creative Director of Enjoy the Music.com Steven R. Rochlin. “Our site broadcasted the entire two days, ten-hour event of authentic, well-respected Blues musicians who have truly lived this unique genre of music that originated within African-American communities located in deep South of the USA. When hearing the Blues, it resonates deeply with one’s soul. As a genuinely American sound, there is no doubt that once you hear the Blues you are hooked for life. It was our honor to stream this event live for the first time in Blues music history back in 2014.”

“We will be once again streaming the original Friday concert on Friday, March 27th, and the original Saturday concert on Saturday, March 28th. Our live stream during 2020 is directly from our master output exactly as it was seen during the live broadcast, warts and all! For the first time, we are rebroadcasting this event on our Facebook page, including a few performances not seen within Enjoy the Music.com‘s YouTube channel! As an important note, it deeply saddens me that Blues Masters At The Crossroads 2014 was the last high quality videoed performances of a few musicians, as they passed away since then and are now in Blues Heaven.”

Watch our rebroadcast of Blues Masters At The Crossroads 2014 on our Facebook page at this link. This two-night concert event begins at 5pm EST (21:00 GMT) on Friday, March 27th and Saturday, March 28th and includes the entire five-hour concert each evening. Each night will feature live Blues music, interviews, and more! Enjoy the Music.com‘s 2020 Facebook live stream is a ‘perfect mirror’ from our Hi-Res master output. This is the same live video we streamed back in 2014, warts and all!

Since 1998, Chad Kassem and his team at Acoustic Sounds have presented Blues Masters at the Crossroads, an annual celebration of Blues music in Salina, Kansas, featuring legends of the genre along with rising stars. Their 2014 lineup was especially strong, with Kim Wilson (formerly of the Fabulous Thunderbirds), Mighty Sam McClain, Lazy Lester, and Marquise Knox joining legendary past performers such as Henry Gray, Birdlegg, Barbara Carr, and others.

The concerts were originally held on October 17th and 18th (2014), taking place at Blue Heaven Studios, a sonically superb 95-year-old Gothic church in Salina’s downtown area that Kassem purchased in March 1996. After almost two years of renovations and upgrades, Chicago blues great Jimmie Lee Robinson was the first to record in the studio in 1998.

Besides Enjoy the Music.com‘s live streaming of the event — which brought the two nights of powerful Blues music to a new, broader audience — it was the first time a live Blues concert was recorded entirely in Direct Stream Digital (DSD), which provides 64 times the resolution of CDs and a much more life-like quality than MP3 tracks. This 2014 Blues Masters concert is also available in 24-bit/176kHz lossless FLAC. This two-night concert is available as a Hi-Res digital download on Acoustic Sounds’ Super HiRez site. For questions and more information please visit Acoustic Sounds and Blue Heaven Studios.

About Enjoy the Music.com

Enjoy the Music.com is one of the Internet’s leading information sites for high-end audio and music news, equipment reviews, plus show reports of both home and portable gear since 1995. We have received critical acclaim from our worldwide readership, like-minded audio publications, and notables such as the President of the Consumer Electronics Association (now CTA). Being associated with eight print publications and two web-based magazines, Enjoy the Music.com is part of a robust grouping of magazines and journalists which features some of the best minds within the high-end audio industry. Enjoy the Music.com also offers our Review Magazine, the industry’s most extensive daily industry news, plus over 260 show reports online. Enjoy the Music.com is media sponsors for many consumer electronics events including AXPONA, Florida Audio Expo, and Rocky Mountain International Audio Fest.

Enjoy the Music.com is the only specialty audio site online with industry news dating back over 20 years. We continue our unique ability to inform and educate both music lovers and gadget geeks worldwide, with partners further extending our ability to reach a global audience. Readers can connect with Enjoy the Music.com on leading social media sites Instagram, Twitter, and Facebook.