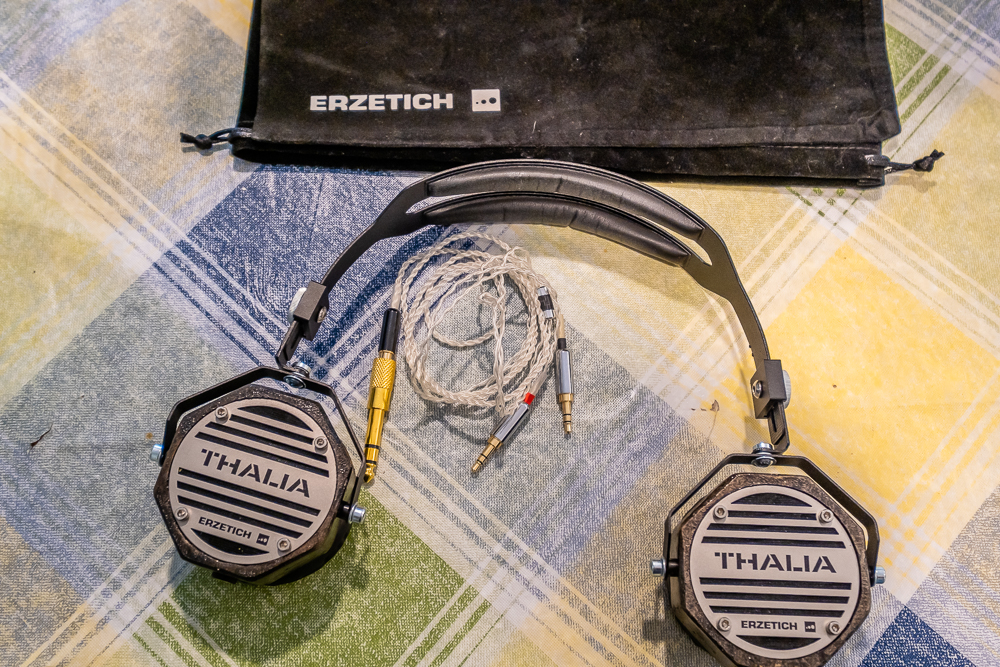 Blaž Erzetič is a designer who makes one of a kind headphones and amplifiers that can be taken with you anywhere. Thalia is the name of the all-powerful  Zeus’s daughter. Designed as a small portable on-ear headphone that comes with a nicely designed copper cable and carrying pouch and offered in the United States for $699.

Designed as a small compact on the ear headphone the Thalia is a unique and different design in many ways.  If you ever wanted a headphone specifically made for you and you alone, the Thalia fits the bill. Blaž handcrafts each Thalia with a choice of Natural, Dark Brown, or Black wood, and no two pairs are identical. Linden, a rare exotic wood, was used to create the cups custom made by hand. Silky smooth faux leather pads are installed for comfort. Chris Zainea, who is the US distributor, was kind enough to send me the open-back Thalia for review.

On-ear designs have at times been troublesome for me because of my large ears; however surprisingly, the Thalia presented no issues and made a positive impression immediately once I had them fitted properly. I found the Thalia to be comfortable with its light headband and nicely designed artificial leather which also showcased the company’s exceptional engineering so evident in the small compact headphone.

Notable was the big sound that came from the small 40mm driver right out of the box.

The Thalia was the first design of its kind from Erzetich. Blaž wanted a design that could go anywhere and more importantly play musically on any device without amplification. People in today’s society rely more than ever on phones and portable devices to listen to music. Companies catering to personal audio realize the need for excellent portable headphones that sound exceptional and can offer the mobility needed in today’s everchanging market.

The  32 ohm dynamic 40 mm titanium driver weighs in at 270 grams and is a lightweight design that plays like a heavyweight champion. Bass control is outstanding considering the size of the driver.

I was impressed with the control of bass and midrange transparency is beautifully rendered with musicality. The highs were never harsh and always believable and accurate. The Thalia had exceptional clarity in vocal recordings and sounded exceptional plugged into my iPad using the portable Audioquest Dragonfly DAC.

While amps are not necessary, using quality amplifiers with exceptional DACs increased performance substantially. Auris’ excellent Euterpe amplifier stepped-up performance with a better-defined soundstage with exceptional detail retrieval, that had outstanding bass texture and the extended sparkly highs were accurate and sounded realistic.

The cable used is a detachable copper OFC cable and the cups, as mentioned above, are custom, one of kind, handcrafted wood designs made using linden wood. The imitation leather pads were comfortable even over my large ears the sound was indeed big and sounded exceptional.

Using both the iPad with the Audioquest Dragonfly DAC and the Auris Euterpe streaming the library from Roon I have access to a large library of music to use for listening sessions. Once I sat down in my downstairs work studio I started using my iPad and went to Roon and dialed in Lucinda Williams’ new album “Good Souls Better Angels” and hit play on  “You can’t rule Me”. Lucinda has a unique voice that truly is one of kind. Her vocal had exceptional clarity with articulation and detail rarely found in a headphone priced so reasonably.

The Thalia performed like a greek goddess on this track. Lucinda was centered with her badass band spread out in their own space in a wide and deep soundstage that had excellent air and space. Musicality was off the charts good with instrument tonality being especially good. Lucinda’s vocal was at times gruffly on this track and accurately portrayed using the little Thalia.

Switching to “Fogerty’s Factory” listening to “Centerfield” brought back memories to one of the greatest rock and roll performers whoever slung a guitar. Seeing John Fogerty do “Centerfield” live 2 years ago showcased a guitar gunslinger who plays with the best of them and is magnificent in concert. The Thalia took me back to that night in Camden, NJ. Rocking with Fogerty and listening to the track on the Thalia never compromised from what I had experienced live.

The Thalia’s dynamic performance once again was able to recreate an exceptional experience and delivered pristine sound.  Once again, I noticed how big this little headphone sounded and my enthusiasm for this design was growing as I listening to excellent rock recordings.

John  Coltrane’s  “Blue Train” is a classic jazz recording and wanting to hear a great saxophone recording with exceptional jazz musicians I gravitated to this classic album. Coltrane performance is legendary on this classic all-time great album.

The musicians were exceptional, Philly Joe Jones’ excellent drums were masterfully reproduced with exceptional clarity. The tap of the drum sticks on the cymbals as well as the detail of the skins was a listening experience presented exceptionally live-sounding and captivating.

Paul Chamber’s bass was defined in his own space. The image of the bass was transparent and had excellent texture and the Thalia never left me wanting more bass while listening. Neutral sound was reproduced within the sound stage and Coltrane’s masterful genius in the middle surrounded by one of the best all-time great jazz bands created was fully realized. The Thalia once again proved to be a worthy contender for the portable crown of best transducer.

Holly Cole “I was doing alright” from her self titled “Holly” album of 2018 showcased her articulate vocal and the vocal duet was transparent with excellent piano that showcases the wide and deep sound stage of the Thalia. Bass control was evident and excellently controlled and went down deep with great extension. The trumpet on this track was never harsh and had a beautiful tone. The trombone sounded exceptional with a terrific extension and always was musical.

If you want to hear a recording that completely disappears you need to hear this exceptional Canadian artist through the Thalia. Seductive and enticing her vocal always has been one of my all-time favorites since the first time I heard her sing in the mid-’90s on a Cary tube amplifier in Rochester NY.

This current 2018 recording shows she is as masterful as ever and has not lost a step and the Thalia was able to recreate her performance flawlessly. Holly’s sexy seductive voice with the Greek goddess lured me in and consumed me with a monumental performance. Special Indeed!

“Beethoven: Lieder” is a rare piece of music. Songs for voice and piano, what many felt was inferior work by Beethoven, turns out to be a rare exciting listening treasure and a terrific listening experience. The Thalia is a captivating transducer that draws you into the performance and makes you forget you have a headphone on your head. Goerne’s tenor vocal is astounding and the synergy between him and Jan Lisiecki is exceptionally recreated with a musicality that is outstanding and beautifully presented.

Tonal accuracy is important to recreate the piano sound and the Thalia reproduced it accurately and had the rare ability to lure me into the performance. Playing this track on the Auris Euterpe, with its magical tube sound, presented a beautiful stage that had the performers in a 3D stage separated with air and space and spectacular imaging. The soundstage was exceptional and the vocal and piano sounded as separate instruments with beautifully composed music and lyrics. Truly an underrated piece of music, the sound the goddess created was as if Thalia had put a spell on me and lured me to a listening experience that was an “out-of-head” experience that I will soon not forget.

The Thalia was my first review of an Erzetich headphone. Headphone.Guru has reviewed a few of Blaž’s designs and Chris Zainea was so impressed with this design that he asked me to review the Thalia personally. Chris is the US distributor for the Ezertich products and I am glad he sent this unit to me for this review.

Blaž’s first attempt at a small portable design is a major triumph with its unique over the ear design. The Thalia is small and portable but in my sessions never sounded small and was a neutral sounding musical instrument that delivered beautiful big and enchanting sound.

The sound was always exceptional with a deep wide soundstage coupled with bass that at times, when the recording called for it, was explosive and the 40MM driver recreated bass with a timbre that was deep, textured, and controlled.

Whether I was listening to recordings that had a large soundstage or vocalist with a single piano, I kept on being impressed with the outstanding midrange and sound. Never did I feel the Thalia missed anything and always rendered excellent musicality. The impressive detail retrieval, and many times, the exceptional transparency equalling many if the top Planar designs instead of a small dynamic footprint.

The Thalis is a design for the listener who wants big sound anywhere with any device. Using high-quality DACs and amplification stepped up the performance significantly but I was perfectly happy using my iPad a dragonfly streaming from the Roon Library.

Ezertich’s Thalia may be small but the sound is big and the goddess makes its mark for an exceptionally neutrally balanced sound that never let me down. The Thalia is a headphone that needs to be heard to be appreciated and is highly recommended for anyone who wants an affordable one-of-a-kind experience. Outstanding design by Blaž and his company and created for the listener who wants to listen to music anywhere! Bravo!!!