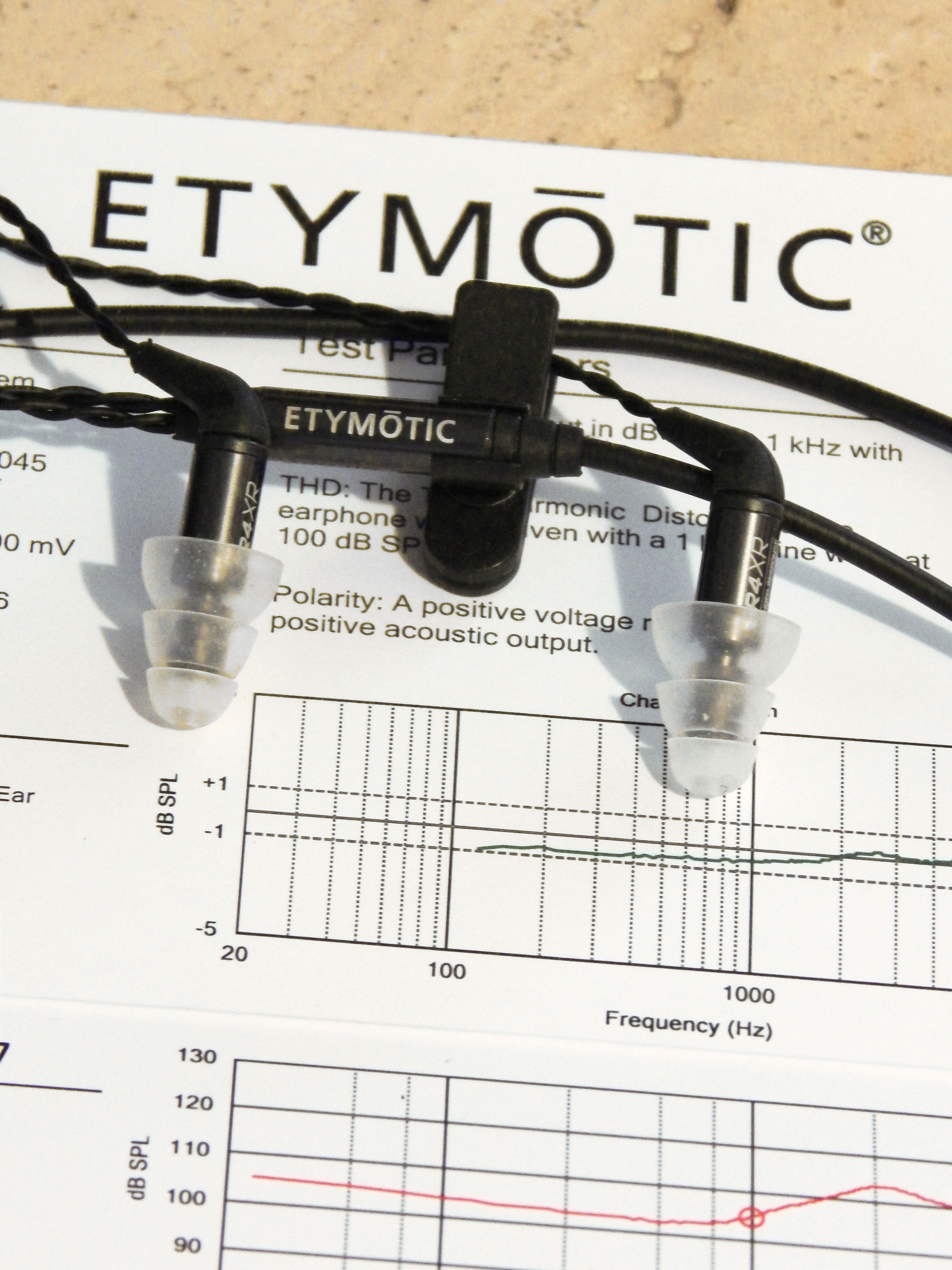 The first IEM (in ear monitor) I had the opportunity to listen to was a pair by Etymotic. It was two years ago at AXPONA when I was still working on the manufacturers end of things and I had a table next to the Etymotic table. Admittedly I was not all that anxious about IEMs, as my experience with earbuds and cell phone Bluetooths did not inspire much confidence in the available sound quality of the medium. This was also when I learned that mine are not the easiest ears for which to get a seal. Rick Carlson of Etymotic convinced me to give their IEMs a try and my first impression was not very positive. At this point Rick noted that the seal was everything, that if the IEMs aren’t acting as earplugs (able to block out external sound), then the fit was not correct and the sound will not be right. He brought out a huge tray filled with dozens of different tips and painstakingly went through the entire set trying to achieve a proper seal. When this did not happen, Rick did not give up. The next day he brought a second tray and we were eventually able to establish enough of a seal for me to get a true sense of the potential of IEMs. Such is the dedication of Etymotic’s employees and indication of why they are household name in personal audio circles.

The build quality of the Etymotic ER4s appears to be excellent. They are the smallest IEMs I have come across so far, employing a single balanced armature driver in a metal body with a detachable cable. They come in an attractive double sleeved box and include a test report, a zippered storage case, a ¼” adapter,  an assortment of tips (2 sizes triple flange silicone and 1 universal foam plus spares of each), a shirt clip, a filter replacement tool and replacement filters (replacement filters are same tuning as original and need only be changed when they become clogged).

My one complaint is the cable markings of left and right, which consisted of a single raised letter, too small to feel and almost too small to see (if they were mine to keep, I would mark the right with a little red paint), I have been told plans are in the mix to correct this.

The SR and XR models of the ER4 are said to have different balanced armatures with the SR designed for a flatter frequency response and the XR having a slight low frequency boost, so I spent some time just listening to the two to get a general feel for the differences before doing any serious evaluations.

Initially after much testing I settled on the foam tips as having the best seal, but the memory foam takes time to settle, and the fit was finicky and eventually I decided I wasn’t getting the requisite isolation so I switched back to the silicone tips with which, after a bit of finagling, I was able to get a seal and in the long run better sound.

Much to my surprise the XRs sounded more natural than the SRs. This could be due to the approximate 9 db boost that both models experience at 2 kHz and the slight dip below 1 kHz, meaning the slow rise below 800 Hz  of the XRs brings it to the mid reference point at about 30 Hz, so although the SRs are flatter below 800 Hz, the XRs are flatter overall. That being said, the SRs would probably be a good choice for the studio and performed excellently with solo guitar as evidenced by Steve Howe’s “Mood for a Day” (DSD from the Yes album Fragile) and Seu Jorge’s cover of “Life on Mars?” (16/44.1). The guitar coming across crisp and lively, the vocals clear and intimate with a from the artists perspective soundstage reflecting a large room echo. Fantasia Suite from Friday Night In San Francisco Live by Al Dimeola, John McLaughlin and Paco de Lucía (DSD) exhibited a huge soundstage with each guitarist pinpointed in space.

Returning to the XRs I began my auditory appraisal with “It Had to Be You” as performed by Benny Goodman and his orchestra from the album Wrappin It Up (16/44.1). The alto clarinet may have come out a bit soprano, but it was sweet and not harsh. The upright piano had a bit of dance hall ring, lively and sprite. The brass did not blare but was a little bit thin for my tastes. For a change from many presentations, the upright bass did not overwhelm the rest of the band, and sounded, well like an acoustical upright bass, rather than a electric bass through a thousand watt amplifier.

I could picture myself as Nicky Hopkins playing at the piano as I listened to the opening refrains of “The Song Is Over” (off Who’s Next by The Who 16/44.1). Again, Roger Daltrey’s vocals were immediate (similar to Seu Jorge’s while listening to the SRs) along with the piano which had a Kawai quality to it, but there was also a definite sense of hall. The drums and bass while not resonant were not at all distant, and had a definite presence.

By placing the sonic emphasis on the orchestra and the reverb, as well as point of view imaging, Beck’s “Paper Tiger” (Sea Change DSD) was rendered a bit more haunting. Putting the guitar and bass leads on an even footing creates the feeling of fill as opposed to solo that the piece seems to be striving for.

Taking a page from the studio history of the ER4 I listened to a few of my own tunes from my The Next Album (24/96). The playback was a little warmer than I would have expected from the XRs character, but the clarity was there even on the bass heavy tracks.

Looking for an appropriate closing track I selected “Psycho Killer” as performed by the Bobs on their self titled album (16/44.1). An a cappella group accompanied by foot stomps, claps and finger snaps as percussion, were an ideal formula for the sonic charm of the ER4 XR IEMs, the voices reproduced with a natural musical quality and a very personal sound field.

The Etymotic ER4 Earphones are a very competitive contender in either configuration. The SRs I believe would be more at home, as it were, in the studio or for someone who is a fan of the Singer Songwriter  or Folk genres of music. Followers of Pop, Jazz or Classical will probably prefer the XRs for their extended bass response. For speed they fall squarely in the middle for IEMs, which is in keeping with other offerings in their price range, this means that though they may seem a bit bright to some, they are never harsh or fatiguing. They are a must for someone who wants to feel like they’re in the center of the band in both tonal quality and soundstage. While not exactly bargan basement, they are definitely an excellent value.