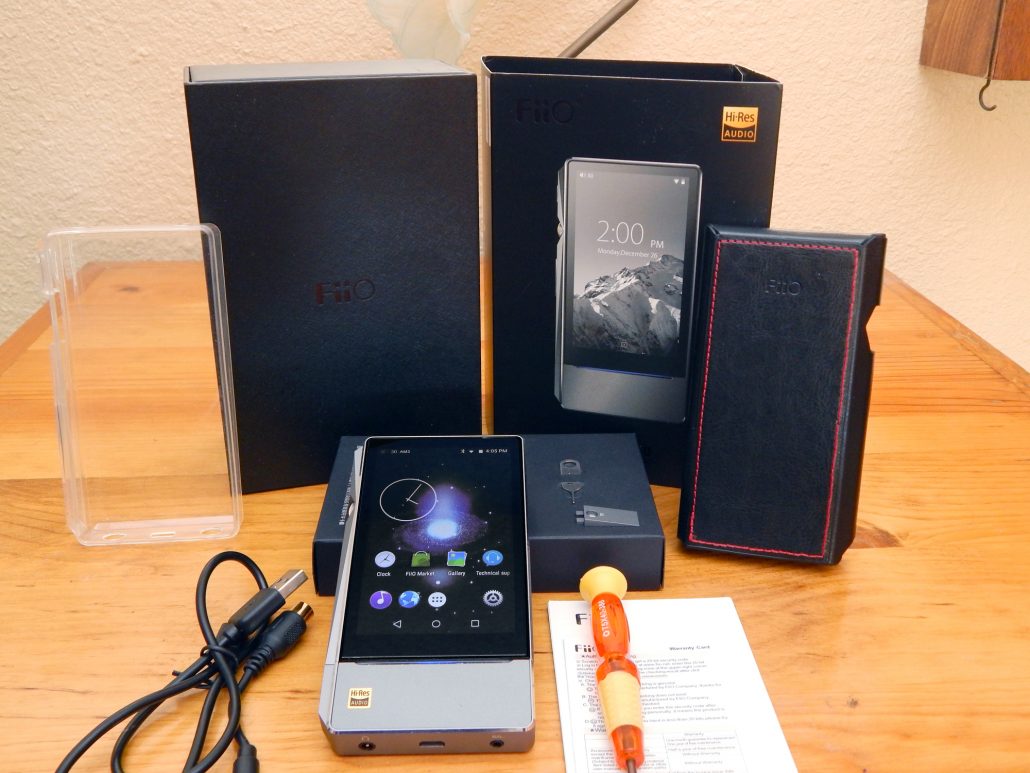 Having recently reviewed the wonderful FiiO X5 3rd gen DAP, I was, to say the least, intrigued to receive their flagship model, the FiiO X7mkII. In no small part because of the question, “Can it be worth nearly twice as much?” To start with, it needs to be pointed out that it is a complete redesign from the original X7, and in appearance is almost identical to the X5 3rd gen with the exception of the swappable power amp module (a design hold over from the original X7). In fact, it will, amazing enough, fit the amp modules from the original X7. As one would expect, the front end (processor, OS, software) of both units are the same, an RK3188 quad core processor, a customized build of Android 5.1.1 and Dual Android / Pure Music operating modes (which means you can switch the unit to a Music Only mode, that dedicates all computer resources to music reproduction for a fuller more accurate presentation). They also share the same 3.97″ IPS TFT touch screen display, as well as the four tactile buttons (power, play/pause, forward and back) and protected volume control wheel. The X7mkII does have twice as much RAM (2GB) and internal storage (64GB).

Where the two models truly depart from each other is the back end, the DAC and the Amplifier sections. Whereas the X5 3rd gen employs the AKM AK4490EN DAC chip, the X7mkII has opted for the extremely popular 8 channel ESS ES9028 PRO SABRE DAC chip. As mentioned before, the X7mkII utilizes swappable amp modules, and comes with the AM3A Balanced output module (an extreme upgrade from the original X7 which came with AM1 single ended standard – power module: as opposed to the Medium or High – power modules), giving the X7mkII almost twice as much power as the X5 3rd gen in balanced mode.

By running Android, FiiO has chosen to use a fairly robust operating system with a long history of usage for portable devices. It also opens the user up to a large catalog of Apps to enhance the user’s experience. While FiiO offers a selection of pretested Apps, Google Play is also included. As mentioned previously, for audio purists who fear that all of these toys will interfere with musical playback, there is a “Pure Music” mode available that frees up all of the players resources for music playback only (though streaming service Apps are not accessible in “Pure Music” mode, DLNA servers are).

Some of the hardware features offered by the X7mkII are a 3800 mAh High-voltage quick charging Li-polymer battery (quick charge capabilities require an optional 9v charger), aptX Bluetooth and WiFi, and a 2.5mm TRRS balanced output. There are also 7 selectable low pass filter settings for the DAC (extremely rare in portables).

To stream music via WiFi, the X7mkII will automatically search for DLNA servers through the built in Player App, or you can install the streaming music App of your choice (both TIDAL and Spotify are listed among the pre-tested Apps).

For those who wish to use the X7mkII as a music server, at home or in the car, the line out is switchable between analog and S/PDIF (coaxial or optical), which in turn can be switched between DoP or D2P (DSD to PCM).

Other features that should be noted are two gain settings (High and Low), left right balance control,  two font sizes (Normal and Large), a ten band EQ with nine customizable presets (more sophisticated EQ Apps are available through Google Play, though they won’t be usable in the “Pure Music” mode), and a spatial software called “ViPER Effect”. There is also a “Tech Support” App on the home screen.

The X7mkII came in an elegant magnetic clasped black box with an outer picture sleeve. It arrived packed in a clever clear rubberized plastic skin and includes second black leatherette skin with red stitching, a cable to convert the line out to coax for digital, a micro USB cable, a quick start guide, warranty card, a special tool for ejecting microSD cards and a torx screwdriver for swapping amp modules.

The titanium finished CNC aluminum alloy chassis is fairly compact, about twice the thickness of an iPhone 5 with a slight protrusion on the left side in which the mechanical volume control knob is recessed along with three tactile buttons (play/pause, forward and back). On the top is a recessed power button and the line/digital output and on the right side you will find the two microSD card slots which are house in little drawer cases (meaning the microSD card slots are all but sealed whether there is a card installed or not). Unusually, the headphone outputs both 3.5mm single ended and 2.5mm balanced are on the bottom with the micro USB port. The display is covered with a factory installed tempered glass screen protector.

On the inside along with the SABRE DAC chip the X7mkII sports three clock chips, one for DSD and  multiples of 44.1 kHz, one for multiples of 48 kHz and one for 384 kHz designed to greatly reduce jitter. The X7mkII supports a dual mode Bluetooth system allowing it to receive and send aptX Bluetooth.

In essence, aside from the 64GB internal storage plus the two microSD card slots, the X7mkII can connect to a NAS (Network-attached Storage) or DLNA server via WiFi, or stream music via WiFi or connect directly to a computer via USB for use as an USB DAC.

On the output side, you, of course, have a selection of amp modules to choose from (available separately), seven currently, including medium-power and high-power modules for hard to drive headphones, as well as the AM0 non-amped module (to increase battery life) for those who prefer to use an external amp or DAC/amp or Bluetooth.

The music player GUI is extremely intuitive and offers some very unique features, such as auto cover art and lyric searches (though the search engine is a work in progress, and lyrical content is still rather limited).

I performed the majority of my listening tests in the “Pure Music Mode” except when it came time for streaming music which requires “Android Mode”. I had a plethora of IEMs to choose from during my time with X7mkII, in fact I used the X7mkII during my review of the Clear Tune Monitors Vintage Series IEMs, and it handled everything I threw at it with aplomb. Yet, for my serious listening tests, I felt it best to start with the MrSpeakers ETHER C Flow headphones. At 23Ω they fall a little below the X7mkIIs ideal impedance for the balanced output (32 Ω though the amplifier performance continues to improve as the impedance goes up) meaning they should present an adequate challenge.

Listening to Billy and Lisa’s “Last Time” (Wake Up The Neighbors – 24/96 kHz rip from vinyl) via the balanced output at a volume of 100 (out of 120), the bass was encompassing, blending well with the keyboards, within a huge soundstage and the drums had excellent impact and snap. The depth of the soundfield was wonderful, Lisa Michaels liquid vocals in the mid-ground providing a rich counterpoint to Rick Derringer’s rolling guitar leads in the background. There was a bit of sizzle to the cymbals but no spit.

Selecting “Oh Marcello” by Regina Spektor (What We Saw from the Cheap Seats – 16/44.1 kHz) the same pervasive immersive presentation was evident (though I was forced to lower the volume to 85, which implies more dynamic headroom than I anticipated). The byplay between the synthesized electric piano and the acoustic piano stark and engaging, clearly audible, as were the vocalized percussion parts.

Having listened to tracks from both the internal storage and the microSD card, I felt it was time to try the DLNA server and brought up “Non Mi Lasciare” (Dario Baldan Bembo – 16/44.1 kHz) to gage the subsonic bass performance. The piano was rich and textured, and while the snare was a touch sibilant, the bass was deep and reverberant.

Switching cables I tested the X7mkIIs single ended capabilities, with Herb Albert & the Tijuana Brass’ rendition of the “Casino Royale Theme” (Casino Royale – 24/192 kHz), while the horns had a bit of solid state edge to them, they couldn’t be described as thin, and though I had to back off a little on the volume, there was still plenty of dynamics and the soundstage was expansive.

For my final testing I moved to the Nobel Katanas and back to the balanced out on low gain cuing up my standard reference track “The Firebird Suite” (Robert Shaw & the Atlanta Symphony Orchestra – Stravinsky: The Firebird; Borodin: Music from Prince Igor – 16/44.1 kHz). The tonal balance was dead on and like my previous tests the soundstage huge and airy.

This left just streaming audio to check out, and for this I picked Spotify which served up “Flume” by Lotte Kestner. The musicality was exceptional providing a large soundstage yet an intimate atmosphere from the low resolution source, showing just how strong the SABRE DAC can be.

As a flagship product the FiiO X7mkII delivers on its promise of ultimate versatility. With the AM0 module, it is the perfect DAP for Chord Mojo lovers or anyone who has a favorite portable amp (though I think the AM0 should be included as it is mostly a cover with a USB port). The AM3A module appears to pretty much be the pinnacle of chip based amplification, offering a fairly musical neutral tonal balance with the current for deep bass and the power to drive most over the ear headphones via the balanced output. If you have hard to drive headphones you might want to opt for the AM5 high-power module, but that is the magic of the X7mkII, you have options. Personally, I’d like to see a tube module or a discrete MOS-FET module, but these are things that can be addressed with outboard amplifiers. So is it worth it? Well that will depend on your application, the FiiO X5 3rd gen is an incredible value, but that being said, so is the X7mkII ringing in at several hundred dollars less than my reference player, and it is definitely a step above the X5 3rd gen.