From The Creator Of The Paradox – Meet The Enigma 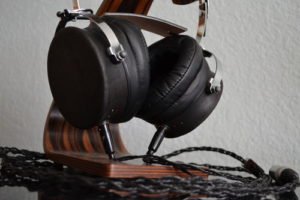 Over the last few years, due to a burgeoning personal audio market, many home grown cottage industries have begun to sprout up across North America. Although these mom and pop operations don’t have the deep pockets, think industry mammoths such as Sennheiser or Sony, they have thrived and have been able to carve out a nice chunk of the market for themselves. Companies such as Garage1217, MrSpeakers, and Schiit Audio have been successful in cultivating a boisterous following for their ever increasing popular offerings of personal hi-fi gear. All these companies were literally started, and some to this day still operate, out of their garage. As tiny as these companies may be few are as small as Mr Luis Flores.

Luis Flores is a one man operation who over the last few years has garnered his own cult like following of boisterous supporters by methodically creating handmade headphones each individually tailored to the customers taste. Originally, he first began turning heads of the head-fi faithful when he created the Paradox and later the Paradox Slant. For those who have no idea what a Paradox is, its a modded Fostex T50rp headphone which is one of Fostexs entry level headphones and retails for just over 100 USD. What’s so special about this modded headphone is it’s been so masterfully tuned to squeeze out excellent sounding audio that many seasoned head-fiers, me included, consider it a great entry level upper tier headphone capable of challenging some of the far pricier flagships currently on the market. As good as the Paradox was Luis wanted more. The end result would be a completely new closed back which he would call the Enigma.

Although the Enigma is what I would term a modded headphone I have to emphasize it is not a modded T50rp headphone. It was created from the ground up from its geeky, quasi Frankenstein appearance right down to its drivers. The drivers were specifically head hunted by its creator and a deal was struck to have them specially manufactured to his exact specification. From there these custom drivers are further tuned by hand. The form factor, although not as refined looking as say a Bayerdynamic T1 or Sennheiser HD800, isn’t without its own character and charm. You only have to see and hold an Enigma headphone and you’ll understand when I say it was created by a hardcore modder who loves to geek out with his audio equipment.

The headband is comprised of stainless steel with a hard plastic and rubber band at the very top crest of the headband. The strip at the crest helps distribute weight evenly so as to avoid discomfort on the wearers head. To further cushion the top of the scalp is a free moving leather strip that’s attached to the bottom ends of the headband via black elastic straps. When I first received this headphone for review my first though was “this thing can’t be comfortable to wear.” At first glance, although rather intimidating, the Enigma fits quite comfortably and snugly around ones head. Although overly simplistic, the combination of the hard plastic and rubber band in combination with the leather strip work amazingly well to combat discomfort and not fatigue the listeners head during long listening sessions. Clamping force can be quite strong for some people with larger heads but because the headband is constructed of strong stainless steel it can be stretched to yield less clamping force and insure a more comfortable fit around the ears and temples.

The wood cups are adjusted via sliders. Each and every wood cup is individually hand made. Luis prides himself on manufacturing each wood cup to customer specifications with a wide variety of different woods and finishes that can be chosen by the consumer. The leather pads are big, deep, plush, and seal wonderfully, not unlike a suction cup. The pads are so deep I dare say even people with slightly larger ears should not have a problem fitting their ears into the cups. The cable itself is detachable and plugs into each cup, not unlike a Hifiman headphone. Upon ordering, consumers can custom order his/her cable of choice as well as their termination of choice. My review unit came with a WyWires Red custom cable with a 1/8 termination; I highly recommend this cable because of its excellent workmanship and ease of use due to its pliability, think tangle resistant.

The following sound impressions were noted using the Ultimate Ears Reference Monitor, AKG Q701 and Paradox as benchmarks. Please note that the Enigma, due to its sensitivity, is not the type of headphone I would class as amp dependent. Even so, I did find the Enigma did scale up quite nicely when driven by amps such as the Schiit Valhi, Aune T1 and iFi iCan. As such, an acceptably good amp is recommended in order to appreciate the Enigmas capabilities at its fullest. Source material was a mixture of 16 bit/44.1kHz and 24 bit/192kHz and 24 bit binaural recordings. Some of the albums used for evaluation: RAM by Daft Punk, Night At The Pawnshop, the Avatar Soundtrack, DJ Kicks by Kruder and Dorfmeister, Fleetwood Mac Greatest Hits, Free by Office Of Strategic Influence, Stoa by Nik Bartsch Ronin, and Up Close by Ottomar Liebert & Luna Negra.

The Enigma is a departure in tuning from what Luis is known for. Anyone who knows Luis or who has heard a Paradox headphone knows he prefers his gear to sound as neutral as possible. The Enigma, although still sharing some of the more important traits of its Paradox sister, is a headphone tuned towards the more mellow coloured fun side of life with a nice large and deep sound stage to compliment it.

The bass is emphasized; maybe 2 to 4 dbs, reaches down deep, and is controlled at all times. The mid bass has a slight bump giving the overall signature a slightly warmer sound. Although bumped up, the bass isn’t bloated or boomy and control, much like the Paradox, is spot on perfect with clean, quick, detailed, snappy bass that never leeches into the lower midrange. When compared to the Paradox the Enigma bass reaches deeper, can hit harder, and rumbles more when pushed by bass heavy music. Overall, this is the kind of bass I like and I have to commend Luis for tuning the bass in such a pleasurable non gaudy fashion.

The midrange is slightly pulled back in comparison to the bass and high frequencies an, for me, is the Enigmas strongest suit; it sound spectacular. With lesser gear my experience has been when the midrange is pulled back detail retrieval takes a hit. But with the Enigma detail retrieval, especially micro detail is excellent. Throughout the midrange note presentation is crisp and clean resulting in no blurring. The best way to describe it, the Enigma midrange serves up every little bit of the music on a silver platter

for the enjoyment of its user. Overall, I have to say the Enigma midrange is probably one of the best midranges I’ve had the pleasure of hearing.

The Enigmas high frequencies very much remind me of the Paradox with the only difference being they extend further then the Paradox. Like the Paradox the Enigma has excellent energy in the upper frequencies but avoids sounding overly harsh or sibilant, a trademark characteristic of how Luis chooses to tune his headphones. I find it interesting how the upper frequencies of these headphones have been tuned. On first listen the upper registers sound linear but upon closer listening you can tell they’re anything but linear. It sounds very much as if certain parts of the upper frequencies have been intentionally elevated so as to give the treble energy and presence while other sections have been intentionally dipped so as to avoid unwanted harshness and an overly metallic and thin tinge. A very hard trick to pull off and keep triangles and cymbals sounding tonally correct but somehow the Enigma and Paradox are able to pull it off.

If you’re in the market for a fun sounding headphone worthy of the moniker of flagship the Enigma is a headphone that deserves further research. In my opinion, it’s an excellent headphone anyone would be proud to own and a jewel for anyone’s audio collection. I have to commend Luis for creating such a spectacular headphone and thank him for allowing me the pleasure of reviewing it. It’s about time one of the little guys showed the goliaths of the audio market what a great fun sounding headphone should sound like.