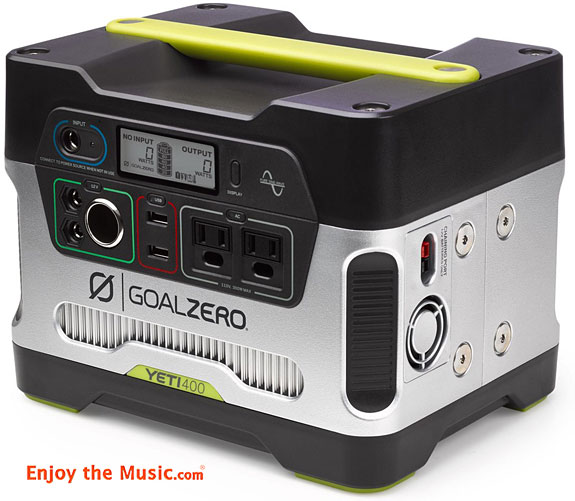 I‘ve always been a proponent of some sort of power conditioning for one’s high-end audio system. This is because no matter how “good” the power coming from your wall receptacle might be, unless your locale power company has set up a transformer in your yard, you are not only sharing power with many others, the power that you are using has traveled quite a distance before it finally arrives at your home. During that journey the power picks up all sorts of electronic detritus, and that electronic debris will affect how your system sounds. Even if one uses a simple passive power conditioner, one that passively filters the power that comes from the wall, some of these make some mighty claims, but I’ve even if this conditioner makes a slight improvement, it is better than nothing, especially when powering one’s sensitive front-end equipment – preamps, DACs, etc.

I’ve used many passive power conditioners over the years, and these devices have always made a positive difference in the sound quality of my system. But, the problem with those power conditioners is that they are still dealing with the AC power that comes from the wall outlet, and for example, no matter how good my system sounded using these conditioners (and especially when not using anything at all) the sound of my system was always noticeably better in the nighttime. There are many reasons for this, but a major reason is that this is when use by others is at its lowest.

There are power conditioners that, in essence, remove the power that runs a system by at least one step, and then reintroduces it, such as the Power Plants made by PS Audio I’ve been using for many years, and one that I reviewed very recently. This review was of their top model, the PS Audio DirectStream Power Plant 20 (P20, reviewed in November 2018) AC Regenerator. This unit made a big improvement in the sound of my system. Very simply, the P20 supplies AC to one’s system by using a pair of internal power amplifiers that convert the AC power to DC power, and then back to AC again, in theory providing fresh AC power.

Since I’m not an electrical engineer I don’t know exactly how the P20 works, but even though I heard a great improvement in the sound of my system, it still sounded much, much better at night than in the daytime. Therefore, the takeaway must be that the quality of the current coming from the power company must, at least in part, be somehow responsible for the quality of the power coming from the P20’s power receptacles that I connect my equipment.

The next best thing for powering one’s system is battery power. I’ve used a few battery powered components over the years, almost all of them preamplifiers. This made a big difference in the sound of my system, even though the battery powered only this one component. Even though it was certainly better than using no battery power at all, this wasn’t nearly enough to satisfy me, because the rest of my system depended on the power coming from my lowly power company.

Late in 2017 arriving at my doorstep for review was the Stromtank S2500 Battery Power Supply. This wonderful 135-pound component was able to power all the equipment in my system. If I kept the volume low enough, I could sometimes even connect my power amp to the Stromtank. I experienced audio nirvana using the Stromtank S2500. The problem with this beast of a component was that not only that I couldn’t  give this unit an unconditional recommendation, I couldn’t even purchase one myself.

The reason? The S2500 costs $19,500. And this wasn’t even Stromtank’s top model. Their top model would be able to power one’s complete system, including many power amplifiers. The top-of-the-line Stromtank is the S5000, which has a storage capacity of 5,000 Watt/hours. It weighs in at 265 pounds and costs $30,000. I cannot afford one. If you can, I hope you would also purchase one for me. It would be awfully nice gift, to say the least. And so, I had to return the S2500 I was sent for review early in the spring of 2018. Ever since then I’ve been living without battery power in my system. But that didn’t stop me from occasionally thinking about how I could get my system to sound the same in the daytime as it does in the wee hours of the night.

I don’t know what led me to begin searching outside the audiophile world for a battery power supply, but eventually I came across the website of a company called Goal Zero. This USA company’s products are made with the camper in mind. On their website they say that their products are perfect for powering cameras, small refrigerators, laptop computers, and outdoor lighting. I thought, if they are touting their “Power Stations” for these items, why not a high-end stereo system? Goal Zero has all sorts of equipment for outdoor types who wish to use electrical devices while they are out-of-doors. They even sell solar panels to recharge their power stations.

There were two models of power station that interested me, their Yeti 400, and the Yeti 3000. The Yeti 400 would be able to power one’s high-end audio system, no problem, although it doesn’t provide enough power to supply juice to a power amplifier, even a medium sized power amplifier. But it can power one’s entire front-end. The Yeti 400 comes is available two ways, with a lead acid battery, and with a lithium battery. The former can provide up to 300 Watts continuous power, 600 Watts of surge power. The Yeti 400 with a Lithium battery also provides 300 Watts but can supply 1200 Watts of surge power. As surge power is a specification that is related to when an electrical component is activated, it doesn’t apply to high-end audio as these components have relays to prevent this initial surge, and don’t fully power up until after their power stabilizes.

The advantages Lithium battery power have over lead acid battery power is that the unit is lighter, 29 pounds for the lead battery, 17 pounds for the Lithium. The Lithium battery also has a longer lifespan, four to five years for the lead battery, 7 to 9 years for the Lithium.  Otherwise both versions of the Yeti 400 are identical. It has three  USB ports, a 12-volt outlet, and most importantly, two AC outlets. It can be fully recharged from 0 power to  fully charged in 7 hours from a wall receptacle. Both Yeti 400 models, other than the type of battery are identical. Both have an illuminated from panel monitor that displays a runtime/recharge estimator, a battery level monitor, and an output/input meter.

The Yeti 400 can be chained with other Yeti 400 battery power units for longer runtimes.  One can purchase a Goal Zero Yeti 400 from many retail outlets such as Amazon, or directly from their website for $359. One can order the same unit but instead powered by a lithium battery for $599. Yes, you read that right. I was floored when I read these prices. I called Goal Zero to let them know that I’d like to review one, that the audio world would be very interested in reading about these battery powered units. And although the Yeti 400 seemed like a good place to start, their Yeti 3000 would be even a better match because with this unit I could power my entire system. The Yeti 3000 provides 1500 Watts of power. It takes 25 hours to fully charge from zero, but both the Yeti 400 and Yeti 3000 can be connected to the AC wall receptacle, so it is always charging, as long as the usage is less than the incoming wattage.

I waited a while, but Goal Zero never returned my phone call, or my email. And so, I did what any obsessed audiophile would do in the same situation, I ordered a $359 Yeti 400 from Amazon. As I am a Prime Member, I didn’t have to pay shipping and I received it two days after I ordered it. I feel a bit odd reviewing this battery power supply in Enjoy The Music that I’ve purchased rather than borrowed from the manufacturer, for the simple reason that those who own a piece of gear are more likely to defend their purchase than give an honest review. Knowing this, I’ll try and be as objective as possible.

But let’s be real – the Goal Zero Yeti 400 provided enough battery power for my system to power my front-end, an EMM Labs DA2 digital-to-analog-converter, either a Chord Symphonic or Pass Laboratories XP-15 phono preamplifier, and a Mark Levinson No. 523 full function preamplifier. The AC of my turntable’s motor remained connected to a PS Power Plant P300 because I can use that as a speed controller. During use, the Yeti 400 never complained. When I wasn’t using a component, it drew little power from the battery because it was in stand-by mode. I shut the component’s power off at night, so in the morning the Yeti 400 was 100% charged.

Since it only has two AC outlets, I used a heavy-duty 24-inch 3-to-1 12-guage extension cable that I purchased from Home Depot in order to power the three components, connecting the preamplifier directly to the Yeti 400, and had the DAC and phono preamp share another outlet since they would be rarely used simultaneously. One might be wondering by now what I thought of the sound quality I got from my system while the Goal Zero Yeti 400 was in my system. If one is very curious about the details of my finds, I suggest one re-read my review of the $19,500 Stromtank S2500 I wrote that is in the February 2018 issue of Enjoy the Music.com. There was no difference in the resulting sound quality when the Stromtank S2500 was powering my front-end versus the Goal Zero Yeti 400. None.

There was still a difference in sound quality between day and night, but much less, because the power amp was the only component using the AC coming from the wall. This difference was small, but significant, but I have no doubt that with the larger Goal Zero powering the entire system not only would there be less difference between day and night in the system’s sound quality, but the sound would be much better overall. And that’s why I still covet the Goal Zero’s $2399 Yeti 3000. $2399 might sound expensive for a Goal Zero battery power supply, but it is certainly not that expensive when compared to other high-end audio components, where that amount of money would put this unit in the “affordable” category!

I hope all realize that my goal here is not to denigrate WinBat Technology GmbH, the German company that manufactures the Stromtank battery power supply. The Stromtank is a marvelous component that I raved about in my review in early 2018. Not only does it have many more power outlets than the Goal Zero power supply, it is a sexy-looking component that I was proud to have in my home powering my system. But the difference in price between the Stromtank and the Goal Zero units are obviously huge, and this price difference made the small inconvenience of not having as many AC outlets a minor issue.

My weeks spent with the Yeti 400 in my system proved that there were no sonic differences between the two units when the power without the power amplifier as part of the equation. I hope I can one day also review Goal Zero’s Yeti 3000. There are other companies that manufacture these battery power supplies, and if Goal Zero doesn’t respond, perhaps I will contact one of them. But, if I get a Yeti 3000 in my system, I will go into further detail about Goal Zero and the specifications of both battery-operated power supplies. Until then, I’m going to listen to some music. It’s all about the music.