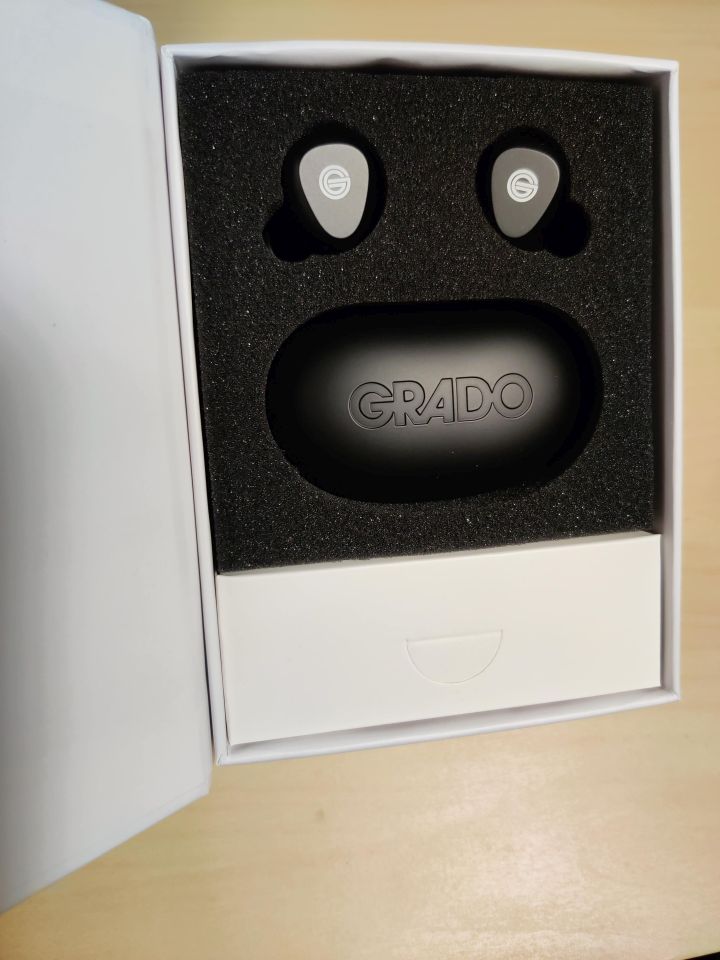 It hasn’t been more than two years since True Wireless headphones started dominating the landscape. What started out as a fad sparked a powder keg of mass consumer adoption. This phenomenon increased the push towards fully wireless on-ear headphones and ushered in the near obsolescence of ‘neck-band’ wireless earphones.

Just last year, Grado stunned me with their GW100 open-back wireless headphones. They were portable, lightweight, punchy, and sported a stellar sound without breaking the bank. At the time of that review, I was waiting with bated breath to see what else Grado had in store for us. A year later we have our answer.

Introducing the Grado GT 220 True Wireless headphone ($259). Coming off the success of their GW100, the GT 220 is described as a ‘continuation of making Grado’s signature sound wireless’.

The GT 220’s come with the typical arrangement of included goods. You get the earphones, a case capable of charging 5 times, a USB-C cable, a pack of eartips, and some manufacturer sheets. One neat highlight of the GT-200 is that the case can be charged on a wireless Qi mat. The headphones are rated for 6hrs of runtime off their internal batteries which I can attest to.

I was caught off guard by the size of the GT 220s out of the box. The large driver size and touch controls require you to spend the first few tries getting it so it’s “just right”. Grado includes recommended fitment instructions with the units and that greatly improved my experience. It requires you to pinch the outer shell of the housing without touching the touch-sensitive face and to use your other hand to assist in placing the headphones in (similar to any other IEM). The trick is to not push the GT 220 too deep into your ear canal. I found that it took a few tries but afterward, putting the GT 220 into my ears was a cinch. One recommendation I have for improving usability is to use aftermarket ear tips. The included ear tips are your generic assortment, I personally recommend going with Spinfit or Sedna. Both were wonderfully paired with the GT 220.

Touch interfaces are all the craze of the last decade and the GT 220 features one on both of the earbud’s face shields. They are used to control playback, volume, and engage your phone assistant. My recommendation to Grado is to remove the touch face. It gets in the way when you are inserting the earbuds and has to be tiptoed around to not accidentally activate it. I have noticed that there is also a bug where upon taking the units out of the case, there is a chance that the volume controls engage. Much to my chagrin, this causes the volume to either increase or decrease for about ten seconds.

The included charging case features an impressive 36 hours of battery for the GT220 (on top of the 6hrs the unit includes). This beats out both the Galaxy Buds Pro and AirPod Pros. However, this comes at a cost of size with the latter two boasting more minimal footprints. During my testing, I found the GT 220 to be more of an ‘audiophile’ true wireless option rather than a lifestyle product like the Galaxy Buds or AirPods. With that use case in mind, it makes sense why size and prioritizing charge trumps the more minimal size.

While the market for true wireless headphones maintains the ‘lifestyle’ identity, the GT 220s deliver more on the audiophile side than as an outdoor use one. During my weeks of testing, I’ve found that when it comes to working out, handling calls, going on walks out in the city, the GT 220s just aren’t up to the grade compared to the goliath in the room; the Apple AirPod/Pros. The larger size and center of gravity of the Grado’s cause them to not stay in place during long walks or exercise. The charging case also needs to be carried in a backpack or purse, it’s just large enough where pocket carry is discouraged. The GT 220 isn’t a direct AirPod or Galaxy Bud competitor. It is an audiophile-tuned headphone in the true wireless form factor. I found that this unique take on the market actually increased my perception and usage of the GT 220s. There were more than enough day-to-day use scenarios where I needed a great-sounding headphone that would be accessible and deployable within seconds while cooking, studying, or doing chores. I saw it as the audiophile solution for the daily grind.

The most impressive aspect of the GT 220 is its seamless pairing and headphone synchronization. Having used both the AirPod Pro and GT 220 for an extended period of time, I found that the GT 220 has a near-perfect track record for connecting to my smartphone compared to the AirPod Pros. On top of that, in the rare scenario when one of the GT 220 true wireless earbuds did not connect to the other, the built-in recovery routine pairs the two earbuds back together near instantaneously. Compared to that, the Apple AirPod Pros have an abysmal record of self-recovery if one of the AirPods did not power on or connect properly. Overall, I am beyond impressed with the Grado GT 220’s wireless connectivity suite; they connect fast and always work out of the box.

The GT 220s were tested with the One Plus 8 and with Spinfit tips. Qualcomm aptX at 44.1 kHz/16-bit was the auto negotiated setting and the highest available. A mix of Spotify Premium and Qobuz Studio was utilized during my tests. Big thanks to our partners at Qobuz for this access and huge selection of lossless sources.

The sound signature of the GT 220s is dark, bassy, with a slightly recessed midrange and warm timbre in vocals. It’s light on soundstage but leads every other True Wireless on the market with its fun and adaptable sound, low-end punch, and vocal re-creation.

Listening to one of my favorite test tracks, “Parce Mihi Domine” by Jan Garbarek, the GT 220s amaze out of the box with their clarity in the upper mid to high range. Although the GT 220s do lean lower on the octave (in terms of reproduction) on my first few tests, I found the upper midrange to actually come through. When the horns came in, the headphones were able to hit well into the 5-7 KH range and remained stable through the duration. The background was mostly quiet albeit the slight noise emanating from the GT 220s amplifier was audible at times. Soundstage isn’t the forte of the GT 220s compared to the rest of Grado’s iconic lineup, but considering this is the smallest driver size they have perhaps ever worked with, in a closed earphone, it was to be expected.

Next up, modern pop with “Shallow” by Lady Gaga and Bradley Cooper from the 2018 standout film “A Star Is Born”. I found the GT 220s to have a slight recession in the vocals but remarkable stability and range extending into the upper-midrange. Bradley’s voice was deep and gritty while Stefani’s produced stunning detail as she hit into the upper notes. I would consider the naturalness to be a hair-pin offset from neutral mainly due to the darker tendency of the unit. One area I was hoping for more in would be the energy of the midrange which fell flatter than I was hoping compared to say the Ananda (open back planar). Which speaks volumes to the GT 220 that I’m even bringing up this comparison.

One of the biggest draws the Grado has that makes me choose it out of my arsenal of headphones would be the bass. It’s not shy and isn’t tuned to be overwhelming but rather as a complement to the music. I wouldn’t remark it to be a ‘tight’ low-end but akin to that of a good home theater subwoofer from say Klipsch. Present and complementary albeit lacking in extreme micro detail and texture compared to an Audeze LCD or Diana Phi. It’s a great addition whether you are listening to classical, modern pop, or even rock.

But perhaps the main draw would have to be its balance. With “Piano Man” by Billy Joel, the idea of balance is brought to the forefront. With prominent vocals, harmonica, a sub-beat, and pianos mixed in. I found the GT 220 to be tuned to bring out the vibrancy in Joel’s voice and recordings which do lean towards that mid recession. The mix and mesh of instruments have powerful delivery and despite a complex mix of harmonics near the second half, the GT 220 keeps up and shines. The large driver size and Grado’s tuning pays dividends in heaps here.

I’m a huge fan of the sound of the GT 220. It’s vibrant and fun and has just enough dynamic punch in the midrange to be interesting while still maintaining a neutral balance (albeit leaning darker).

Grado’s first foray into a closed back true wireless was met with mixed signals on first announcement in the market. It’s a departure from the typical Grado headphone and even I was curious about its implementation. The touch interface is a neat idea but dull in actual usage and something I wish to see replaced in the future. I am also hoping that Grado includes better tips with the GT 220 in the future as well, the improvement in usability and sound is immense with stiffer ones from Spinfit or Sedna.

Whatever doubts I may have had in the beginning are gone. The GT 220 is simply the best sounding True Wireless on the market with a focus on sonic reproduction. Lifestyle product be damned; it’s the audiophile take on the true wireless market. Grado may have just joined the wireless market, but they are making large splashes with their expertly tuned headphones.