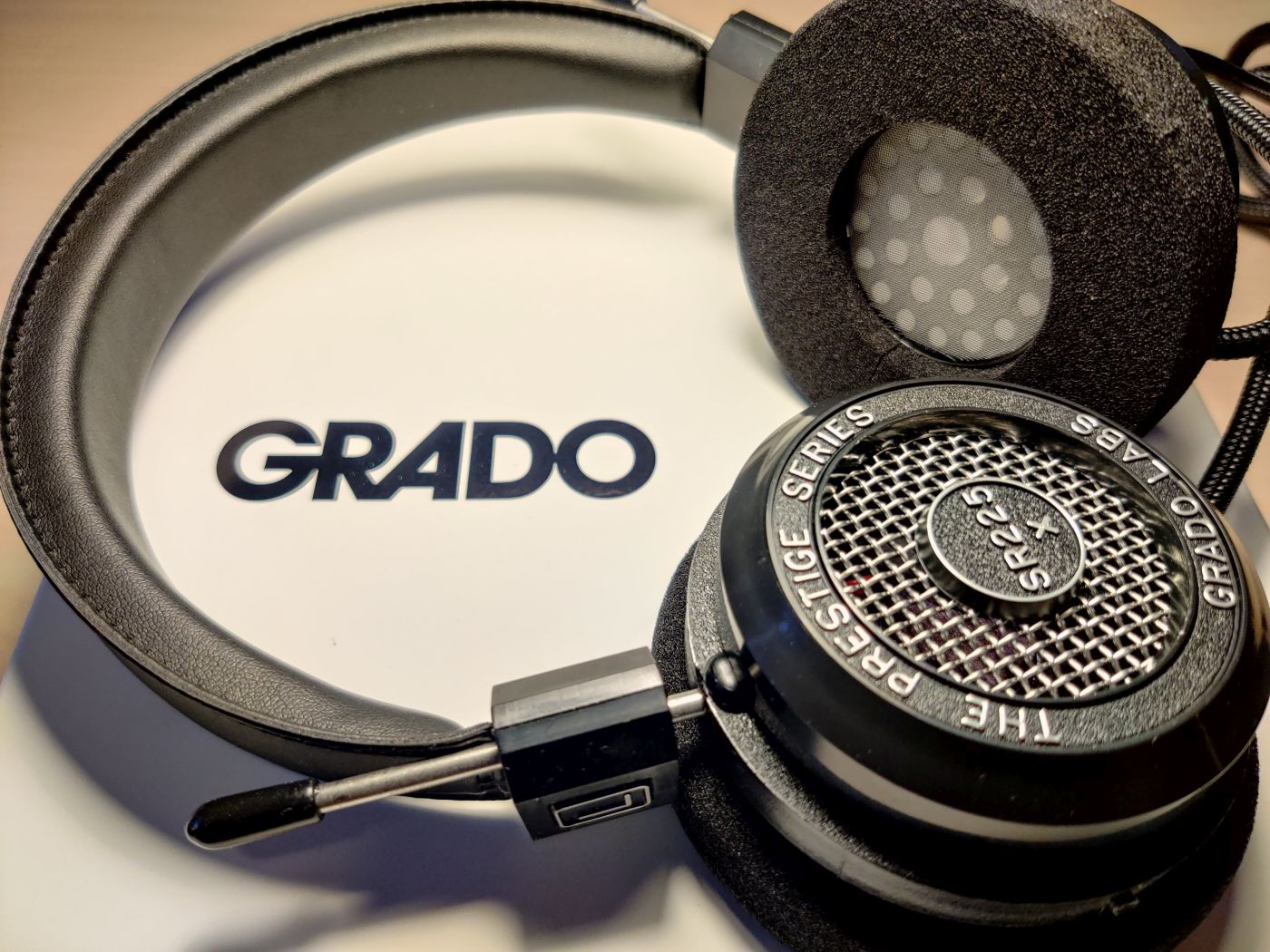 Succession isn’t an easy topic to talk about in families. It often comes bound by remnants of filial piety with a dose of courage needed to take the next step. It’s not easy ‘living up to’ anything. Whether it be taking on your father’s business or proving to the world that you live up to your family’s name, it all comes down to a simple fact of courage. The courage to leave one’s comfort zone and go beyond, further than where you have ventured before. Just like how a son or daughter is not necessarily their parents. So too are successors in products. Despite a familiar name, the PS5 has to prove itself to live up to the powerhouse that the PS4 was.

Today, I’d like to introduce a successor to a titan of our generation. Grado has unveiled their new SR225x ($225). The direct successor to their well-beloved SR225e; a favorite for almost a decade now amongst headphone enthusiasts. I can remember it like it was yesterday when I was a greenhorn to the hobby. The ‘e’ prestige series Grados were all the hype and crowd favorite for the price range. It was for good reason too. Not only were they affordable, they also sounded great for any genre you threw at them.

The SR225x brings about new upgrades while keeping many of its original family features. It still sports the iconic Grado look and to the untrained eye, has the eyes and nose of its father, and the warmth of its mother; it’s immediately apparent what family the SR225x is from. It differs in
that it now sports an updated “F cushion” which Grado says will open up and provide more textured tones. Also a new and improved headband and cable increase durability and comfort. The real star of the show is Grado’s new 4th generation X Series Driver. Grado states that these have a “more powerful magnetic circuit”, decreased mass, and reconfigured diaphragm on the 44mm drivers.

As was with past Grado headphones, these are still hand-built in Brooklyn NY. The unboxing experience is quite minimalist. You get a simple easy-open box with the headphones, a quarter-inch adapter, and some minor documents. Grado minimizes waste, increases recyclability, and honestly makes it as easy to start enjoying your new headphones as possible. I’m quite impressed with just how simple their packaging is while maintaining enough information to the consumer and with their ease of opening.

During my month-long experience with the SR225x, I’ve found it to be usable around the house with my DAP. The headphones themselves are light enough and the cable can ‘mostly’ be coiled. However, due to the heavier construction of the cable used, I can’t see the SR225x as an ‘ultra portable’ option that I know many in the past had used Grados for. It’s more of something you use at your desk, around the house, or bringing on trips to use in the hotel.

I personally would prefer a lighter and shorter cable for my use cases but I can see what Grado is going for. The thing about inheritance is that it still features the same ‘style’ of pads used even if they are now upgraded to F cushions. While perfectly workable for one or two hours, I found that the comfort of them is something I’ll need to perform the popular ‘sock mod’ on for extended usage. The good news is that there is very little clamp pressure and my chagrin is more so on the pads themselves. This makes it a relatively easy modification to do.

Much to my surprise, the SR225x fulfills another part-time role I wasn’t expecting; PC Gaming. I typically run demo units through a gamut of day-to-day tests including when I’m lounging at my desk, working, and in this case, gaming. The soundstage of the SR225x was open and the upper bump in the mid-range made gunfire sound realistic and enemy footstep and targeting locations easy to pick up on. The Grado’s famous house sound with the upper treble peak made window breaks in Valorant, and footsteps behind the wall much easier to pick up on past the jumble of battlefield sounds. While the soundstage and ‘feel’ wasn’t as wide as say a high-end over-ear planar magnetic, it was remarkable how well the SR225x fared given its price point and size. Whether it be in single-player campaigns of Battlefield or competitive FPS titles like Valorant, the SR225x’s mid-range and dynamic bass response impressed with how much range it could cover and make shine. The downsides again being the comfort over extended periods on my ears. After a few hours, treble fatigue would set in for me as well and are another point to consider.

The Grado SR225x was used for a period of over a month with over a hundred hours ‘burned in’ leaving it on with my DAP. If you want to stop reading here, I recommend checking out Grado’s own sonic description of the SR225x under “Signature Sound” on their website. Grado to this day has the most accurate and succinct descriptions of their own headphone’s sound signature and characteristics of any manufacturer I have met. Big shoutouts to their transparency and neutral overlook at their lineup.

The SR225x delivers an incredibly warm sound with a sharp and nuanced middle range, present and fairly punchy lows, and captures the majority of genres thrown at it. There’s a slight dip right under the middle range before a curve back up in the lows to make sure the bass response is there. This makes it so that I found some male voices to just have a tad sloped off at the lower octaves and frequencies. The mid to upper vocal range is excellent for its price range and produces a detailed and vibrant sound packed in detail and sharpness. There is a slight filtering/veiling effect present around the mid to lows covering a bit of detail retrieval in that gap I mentioned but I’ve noticed this in Grado’s other lineups as well. I like to think of it as an intentional tuning that gives their family that famous sound signature.

First up is “Feeling Good” by Michael Bublé from his album “It’s Time”. The Grado’s start the song strong with a large soundstage and sense of depth. At times, it feels almost transcendent with how well it is able to hit above its price for the transparent background it creates. As the brass instruments join in and the famous melody kicks in, it’s apparent that the SR225x handles dynamics well. Contrary to headphones tuned such that we get an awkward signature providing
nuance to one range. I found the headphones to be musical and fun in how no part of the song felt out of place. Like a good garage jam session, the Grado fits right in and doesn’t try to upstage the other members. The SR225x is mixed expertly to balance the song’s strengths with a knack for accentuating the upper mid vocals. The song ends on a strong note with the performance being well contained and with just enough lows and mid instrument engagement to
keep the ante going. However, the lower vocal dip I mentioned earlier is noticeable and was one reason for using Michael Bublé as the example here. As great as the composition was, there is just a tad bit sloped off in the lower vocal range. The SR225x is preferential to the more intimate voices of female artists.

Following that up, we have “Fly Me To The Moon” sung by Yoko Takahashi and originally by Frank Sinatra. For die-hard Sinatra fans here, I’ll beg for your forgiveness just once. My consumption of ’90s and 2000s TV shows like Neon Genesis Evangelion have heavily colored my tastes towards Yoko’s version; to my generation, it may perhaps be the more listened to version than Sinatras. I found that the SR225x captured the charm of this song well with its
more prominent hump in the upper mid vocals while the string instruments and piano took a more intentional background role. Yoko’s vocal performance here is captured in great detail as more of the higher vocal ranges she uses are what the SR225x excels at. Later in the song, as she hits the high notes, I was surprised at how steady the Grado was in producing the note rather than a scratchy tone which often occurs at this range. In some senses, I can see the
tuning of the SR225x to be that of a cozy late-night jazz bar. Prominent and peaky vocalist up front with instruments in the rear. In this sense, I found the headphones to be deliberately designed and engineered to recreate this experience and offer the listener a more ‘personal’ live experience to a T of what you’ll actually get.

Overall, I found the sound of the Grado SR225x to be excellent for what it brings to the table. It’s engaging and well-balanced in its sonic reproduction. It’s remarkable in its mid-range stability and the ability to hold notes with ease without getting scratchy and for its compatibility with a wide range of genres with just its 44mm X Series driver. The SR225x at the end of the day is still a ‘small’ on-ear headphone and thus is limited by this physical size meaning the ‘fullness’
and enveloping nature of its sound will also be limited. But it packs a punch for what it offers despite its small size.

The Grado SR225x had big shoes to fill. It inherited the namesake of one of the most beloved headphones in the $200 price point range (which also happens to be one of the most popular) and knocked it out of the park. The increased build quality has given it more durability and it packs serious sound for its small size. The soundstage hits far above its class and the midrange is fluid, sharp, and smooth. I would like to see increased comfort in the future however but for now, I’ll go with the ‘sock mod’. The Grado SR225x succeeded the SR225e and sets forth a new bar to beat. Grado’s updates live up to the namesake and will now extend the SR225 name for more years to come and more listeners to come and enjoy.