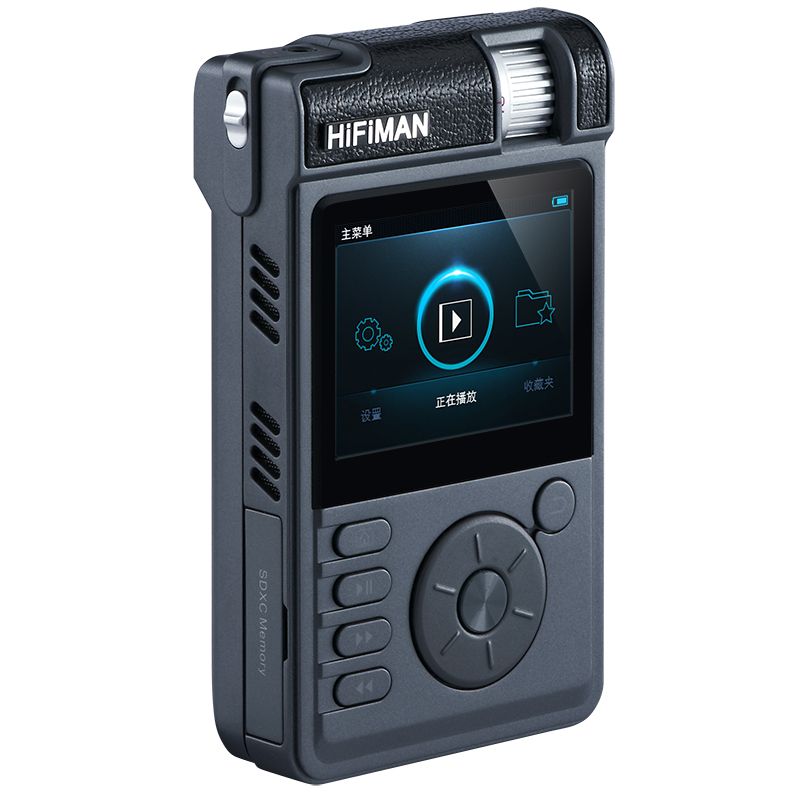 Hifiman Audio is based in the city of Tianjin and was founded by Dr. Fang Bian in 2007. Most people in audiophile circles hear the name Hifiman and connect it to excellent sounding headphones, IEMs, and amps. Speaking as someone who has heard their HE-500, HE-560 HE-6, and owns the HE-400 I have no qualms in saying Hifiman is manufacturing some of the better sounding headphones available today. As well as making headphones, IEMs, and amps, Hifiman also manufactures their own line of portable players; the HM-601, HM-602 Slim, HM-650, HM-700, HM-802, and their flagship player, the HM-901. Personally, after receiving the HM-802 for review I’m rather surprised that Hifiman hasn’t made a bigger splash in the audiophile DAP market.

The HM-802 is one of their top tier players situated directly under the flagship HM-901. Anyone who has ever seen or handled a Hifiman player knows that the Hifiman is unique. In a sea of flat, brushed aluminium, minimalist slates, the weirdly shaped and bulky plastic form factor of the HM-802 stands out like a sore thumb. Holding the HM-802 in my hand I can’t help but think of my distant teen years during the ‘80’s when I used to bop around school with a similarly sized hard plastic Sony Walkman or an off-the-shelf handheld radio. I’m not going to sugar coat it; I love stuff that has a retro feel and look to it. In my opinion, if done right, it lends character to a product. That aside, it wouldn’t be surprising to me if enough potential younger consumers have passed up on the HM-802 based solely on its looks. If so, it’s a real shame because the HM-802 with its hi-fi sonics and good Tai Chi 2.0 UI user experience is far and away an excellent product when put up against other so-called audiophile mobile players.

When you buy the HM-802, it comes packaged in a beautiful black display case with the Hifiman logo embossed in gold on the lid. Inside you get everything you need to get the player fired up and rocking, USB cable, S/P DIF input RCA line out cable, charger, a Li-ion +7.4V 1600 mAh removable battery, users guide, and the amp module of your choice. Unlike other players on the market Hifimans player’s internal amp section can be swapped out, allowing the consumer to tweak the player to attain the best sonic results for their IEM/headphone. When ordering, the consumer can choose from the standard amp module or opt for the Balanced, IEM, or Minibox amp modules. If you’re unsure which amp module is for you or if you intend to drive various different gear with the HM-802, you can purchase the different amp modules for a nominal fee.

The DAC chip utilized is the Wolfson WM8740 Dual DAC chip. To my knowledge, with the exception of the DAC chip and its implementation, the HM-802s circuitry and functionality is essentially the same as the flagship HM-901m, right down to the stepped attenuator dial used to control volume. The amp module can be accessed by popping out the removable battery and the amp module itself can be mounted to the players motherboard by simply sliding it in not unlike sliding in a video card into the motherboard of a desktop computer. The removable battery is rated at 11 hours but your mileage may vary depending on what type of load you’re driving. Think hard to drive orthos such as the Hifiman HE-560. File support is excellent with support of 16 and 24 bit WAV, FLAC ALAC, 16 bit AIFF, AAC, APE (44.1 khz and 48 khz), and DSD (DFF).

As mentioned above, the HM-802s body is constructed of hard durable plastic and has the exact same rugged look as the HM-901. In essence, the HM-802 can be thought of as a baby HM-901. The player’s dimensions are 72mm W x 117mm H x 29mm D and weighs in at 250g. The HM-802s body is covered with buttons and switches offering the consumer all sorts of functionality. All buttons, wheel, and switches are firm, unobtrusive and placed in a well thought out methodical manner.

Along the right side from top to bottom you have a lock switch, which will lock the player and all its other external controls, a gain switch, an HD/vintage switch, a vent, and a power on off switch. The HD/Vintage switch is an added sonic tweak that alters the DAC frequency response. When on Vintage you get a 3 db roll-off at 20 kHz but when on HD there is less roll-off in the high frequencies. The bottom of the player is bare with the exception of a release switch for opening the back panel, allowing access to the player’s battery and amp module, and a 24-pin dock used for connecting the player to your PC or charging.

On the left side from bottom to top is a SDXC card compartment, a series of vents and a normal/balanced switch. The HM-802 has no internal memory for storing your files. All files must be stored on an external SD card that the player supports up to 128GB. Along the top you have a headphone output jack and nothing else.

The front of the player is quite busy. On the top front you have a recessed wheel that is the stepped attenuator for controlling the volume. Personally, I love how Hifiman chose to mount the volume control due to the fact it’s eliminated the problem of accidentally turning the sound up to ear deafening volumes when the player is sliding around in your pockets. On the bottom front left you have four buttons; home, play/pause, forward, and reverse. Center front you have a nice well implemented scroll wheel for navigating the UI icons with a button in the center. Once you scroll to the UI icon you want you can access via pushing the center button and further navigate the UI. Just above the scroll wheel is a small back button. Above the scroll wheel you have a standard no frills screen that takes up roughly half the front of the player. The screen is not a touch capacitive screen.

TaiChi 2.0, the latest player OS installed on the HM-802, can be described with one phrase; it always works as advertised. In comparison to the touch command enabled flashy UIs of players such as the CalyxM, AK120, or even the mainstream UI king, the iPod Touch, TaiChi 2.0 looks like a primitive throwback. As flashy and cutting edge as these OS’s may seem TaiChi 2.0 was able to accomplish something that none of the three other players I’ve mentioned were able to. In the short time I had it in for review I never experienced one single bug. Although TaiChi 2.0 may appear primitive at first glance, the OS has everything needed to provide a good user experience and I was able to browse my music via genre, artist, or album or, if I decided I didn’t want those browse options, I could browse my SD card directly folder by folder. All album art appeared as it should, and playlists functioned as expected. In short, TaiChi 2.0 may not be the prettiest OS I’ve ever seen on a player but it worked without a single quirk or misstep for the entire time I had it. Considering I’ve owned and reviewed various DAPs from the audiophile player market, that’s extremely rare.

The following impressions were gathered using my UERM custom as well as my AKG Q701, Fostex T50rp Paradox, and Hifiman HE-400. Amp modules used were the standard, IEM, and balanced amp modules. Most sound impressions were formed while using the IEM and standard amp module though. Throughout the review most sound impressions were formed with the player set to its HD setting. Various different types of source material were used while evaluating the HM-802 comprised of 24 and 16bit ALAC and FLAC as well as 24bit binaural. Some of the key records used to evaluate the HM-802 were: Jazz At The Pawnshop, Random Access Memories by Daft Punk, Audioslave by Audioslave, The Very Best Of Fleetwood Mac, Vegas by The Crystal Method, The Tron Legacy Soundtrack, Jazz In The Key Of Blue by The Jimmy Cobb Quartet, Fat Of The Land by The Prodigy, and Up Close by Otto Liebert and Luna Negra.

The HM-802 has a wonderfully addicting sound. Although I can’t say it’s the best I’ve ever heard, at slightly over $600 MSRP it delivers a lot to the table. The player packs an addictive rich musical sound with a very well developed bottom end. The lush bass extends low and deep. Although lush with a slight mid bass bloom, the lows are far from bloated and smearing is nearly non-existent. Control is excellent with only minimal leeching into the lower mids. The mids have slight warmth to them and avoid sounding overly dry. Vocals are slightly forward and male vocals especially sound quite nice. Note presentation is slightly on the meaty side but not overly phat sounding. Although on the warm side of life smearing is not a problem on the HM-802 and note decay is quite good. The highs are smooth with excellent energy and avoid the pitfall of sounding overly metallic or harsh that lesser gear is guilty of. Extension in the high end is quite good and I have to give Hifiman top marks for not rolling off the highs. Tonality is another strong suit of the HM-802 and instruments sound quite accurate for the most part. Staging is good as there is an acceptable amount of air between instruments. Depth is not to bad but could stand for some improvement. Mind you, I’m a stickler for depth when grading soundstage.

The HM-802 may not look like the sexiest player on the market but I doubt those looking for a true hi-fi sound will ever care. Personally, I think Hifiman players with their retro look have character and this is something seriously lacking in the market. Also, the fact that the HM-802 can be tweaked by swapping the amp modules is a great feature that allows real flexibility to better enjoy the sound.