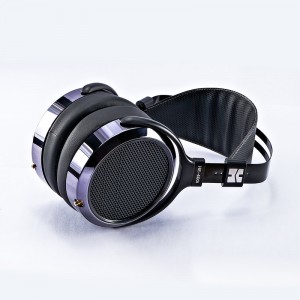 What makes a truly great headphone? Is it sugar, spice, and everything nice? Or is it an exotic combination of the dark arts, the eye of newt, and the working hands of a magical sonic sorcerer? The answer remains an elusive mystery. There are boundless amounts of theories (just search online using the word “best”) on what makes the best headphone or how to even tune headphones to desired effect. Most companies want to create the “perfect” headphone. Who wouldn’t?

Hifiman was founded by Dr. Fang Bian in 2007 and the company offers a variety of products ranging from planar magnetic headphones to amps, to IEMs and to DAPs. Hifiman is a company hot on the pursuit of perfecting headphone playback and they are highly regarded for impressive fine-tuning philosophy and high quality product line. The history of the headphone we have today – the HE-400i – began with the HE-5 introduced in 2009. It was quickly followed up by the HE-5LE, before the HE-6 and then HE-500 made an appearance. Needless to say, they’ve been churning out a healthy amount of planar cans throughout their relatively short existence. And their lineup is impressive, to say the least. The Hifiman HE-400i is the newest product from Hifiman. The HE-400i, along with the co-released product, the HE-560, will replace the HE-400 and HE-500, respectively.

The HE-400i is more lightweight than the burly HE-400 design. It features a suspended headband connected on the two sides by the band structure. This, along with its driver housing design makes the headphone much lighter and airy than the previous generation. The usage of thick metals and overly plush surfaces were reduced. The extra material added unneeded weight that didn’t affect the headphone, and so in its place, the suspended headband and hard plastic connectors enable the headphone to be lightweight, comfortable, yet still sturdy.

The headband and earpads add a different level of comfort. Unlike the plush headband and pads on the HE-400, the 400i’s suspended headband delivers comfort without being too thick and the pads also seem to be a bit lighter and more breathable. Whereas the old version felt like an Audeze LCD2, the new version feels like an AKG Q701.

The pads use a removal method that relies on tabs that push into a thin slot between the housing and driver. On paper, it seems to be much easier to remove and replace, but it follows a specific pattern. The first step is to question yourself whether you should even attempt to remove the pads. The second step is denial, as after you’ve taken off the pads, you realize that you don’t know how to put them back on. The third step is anger as you struggle for five minutes getting the pads on. The fourth step is anxiety as you realize that the pads have an orientation to them so that you must repeat the entire process again. And finally, the fifth and last step, is when you learn how to do it well, you become a warrior at the removal and adjustment of HE-400i pads. Because admit it, we go through this pattern with all our new headphones when we attempt to manipulate the pads. It’s a rite of passage for every headphone owner.

Hifiman once again uses the same connection format used with their past headphones. And this is the one concern I have with the design. We are given two small connectors on the headphone and a cable with a screw-on lock and then the cable itself. The issue with this is that it is often difficult to screw only the ‘screw’ part, which results in the user having to twist the cable to attach the cable. This curls the cable and it is impossible to uncurl it without fixing the attachment. While this process isn’t difficult, it is a bit time consuming, especially considering you will have to put away and re-connect the units many times in your life.

The new HE-400i’s seems to be designed specifically for home and office users, but it is possible for portable use. The 400i’s are undeniably bulky and large compared to something like a V-Moda M 100 and this keeps it in the same usage market as its predecessor, the HE-400 – it’s mainly a stationary unit meant to be plugged into desktop rigs. This is made most obvious by the cable connection format, the large connector band at the top, and the open-back nature of the cans. All hope for portability is not lost, however, the new duos from Hifiman have weight on their side. Rather, lack of weight. They are feathery light compared to the older generation and slightly more compact in size. Perhaps Hifiman may one day position itself towards a more multi-purpose market for its keystone planar magnetics, and I think that this is a great starting point.

Overall, the build and design of the HE-400i is impressive given their tasks on making the headphone lighter while maintaining integrity. It feels luxurious and improves upon the HE-400 it is replacing.

The sound signature of the Hifiman HE-400i can be described as balanced, although with slightly enhanced bass end and a great vocal performance. The sound is sweet while maintaining lots of detail and I find that it tends to lean analytical on specific recordings (many people will desire this).

The bass is extremely punchy and is heard in proper proportions. It’s balanced with a darker timbre. Listening to the track “Kyoto” from Bangarang EP unveiled the low end performance. The sound was thick but boasted a conscious thump. The bass flowed like ocean waves on this EDM track. It was an insightful look at the planar magnetic qualities of the 400i and their prevalence in delivering heaps of information. The mid-bass was powerful without going overboard, but the sub-bass was slightly lacking. You can feel the sub bass throughout the headphone on rap tracks, but it’s a bit subdued. On the other edge of the spectrum, “Nolitus” by E.S Posthumus and “Hotel California” by the Eagles showcased the 400i’s ability to accurately place bass notes and produce them with exacting speed and accuracy. The bass was always in control and properly placed in relation to the rest of the frequencies. The only issue I noted was that the bass wasn’t as seamlessly integrated as much higher priced planars deliver. And there are rarely any units even in that range performing on those highest of levels. Thankfully, the HE-400i has adequate bass reproduction and only delivers booming performance when the recordings ask for it. I like this a lot. On Classical music the low end is properly placed within the orchestra, it is not overly emphasized, yet on rap music the bass comes alive. This tells me the 400i was designed and tuned to accurately reproduce any type of recording as opposed to being tailored to one specific sound or genre alone.

When it comes to the midrange, instrumentation arrives detailed and (depending on the track quality) with an almost sharp-like quality. It packs a monumental feeling to it when you listen to instruments from the likes of Jia Peng Fang on his album Erhu. The presentation of the tracks in the album from the 400i was perhaps one of the best I’ve heard. The sound was controlled and had just the right timbre and speed to match with the prowess of Jia Peng Fang. At the other end of the audio genre, I used Macklemore’s hit album The Heist for a more mainstream example of what the 400i’s could do. I was quite content with the performance the cans gave me on the slightly more compressed album, but I wasn’t as enveloped as I was with Jia Peng Fang (a better sounding record). The mid-range was a bit congested at times, and its forward presentation made it sound a bit bright at times. The quick sonic attacks and energy that mainstream tracks are filled with gave the 400i some trouble. It was still competitive against other units in the range for what it could produce, but it was by no means the best to take on such modern recordings (if price was no object, of course). The instruments are forward in their overall presentation and practically in-your-face. But this aspect of the HE-400i is greatly appreciated when listening to instrumental music. It puts you front and center to all the action. It places you there.

Vocals are the most outstanding feature of the headphone. They are intimate, clear, and full of life. The vocals are presented, as are the mids, with a forward lean and with an emphasis on detail. Vocals are active and have their own space apart from the instruments, which is a much desired quality. But the real winner is how the headphone mixes the instruments with the vocals. There is just enough overlap that it sounds like they are one thing, but not enough that they distort the other. In the track ‘Hanabi’ by ClariS, the vocals were absolutely stunning with the 400i’s sweet timbre and its ability to combine background and foreground mids. The 400i’s place you in a front and center seat to a private vocal concert, and the backing track is oozing from every crevice. Everything is placed where it should be.

However, despite the detail and forward ventures the HE-400i delivers, I have found that it has a slight veil that dilutes the overall naturalness and timber of the unit. Instruments simply don’t sound as natural as I would prefer. You can have beautifully articulated sound coming from this unit or something that sounds as if you are listening to music underwater. The timbre is also generally warmer and sweeter than normal, which while it isn’t a problem for the music, it is key look at the units overall performance in pitch adjustments.

The high range frequency of the 400i is precise and offers good balance in its delivery. It doesn’t waver in its production, and it isn’t overly bright. It’s pretty much what most people want. Adele’s “Rolling in the Deep” and the Eagles’s “Hotel California” were good examples of frequent lower-high ranges and quick high frequency explosions. They were less pronounced but held in producing the notes needed at the closest timbre that it could. I like my high range like my eggs, well done, never scrambled or burnt. It’s fine with me that there is a slight dip in the highs, as I would rather it be slightly dull than overly bright or even missing entirely.

I found the Hifiman HE-400i’s to work fantastic with certain recordings, but sometimes analytical. But, hidden behind my standards is a headphone that performs admirably against the Alpha Dogs, and most importantly, its predecessor, the HE-400. The 400i’s sonic performance will definitely turn many heads with its forward presentation and orientation to detail.

I am quite pleased with the HE-400i from Hifiman. We clearly notice many improvements that Hifiman have accomplished in regards to weight and comfort, and more importantly, sonic performance. One thought is to compare the price to its predecessor, but I think that rather than asking about how it performs from a cost perspective against the HE-400, the question should be how the 400i performs against headphones in the $499 range. And the answer is a highly competitive headphone that performs quite admirably on most musical genres and will be highly regarded by many for the unique things it does so well. The HE-400i will make waves in this price range.