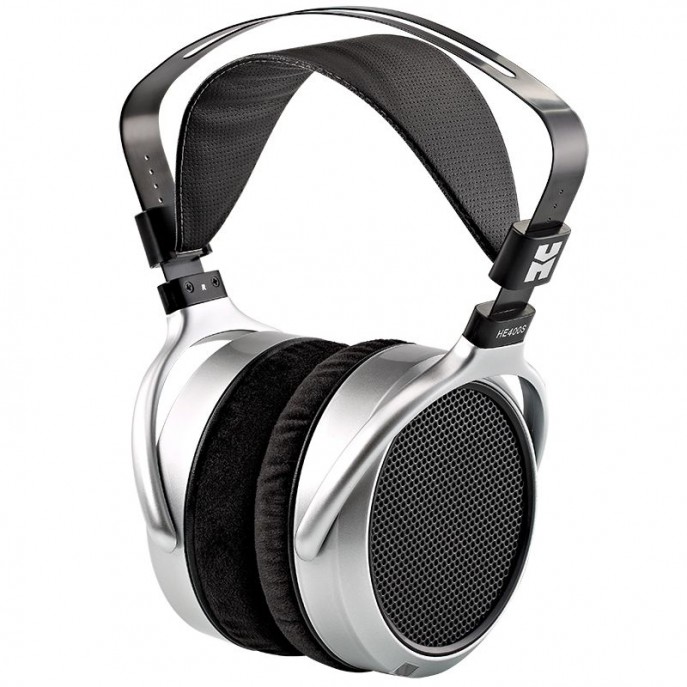 The last time Dr. Fang Bian delivered goodness to my door was last year with the HE-400i. I still remember walking home from Capital Audio Festival cradling the newly engineered headphones as if they were my first born.  At the time, I couldn’t believe the change that Hifiman surgically performed to their coveted headphone line. What used to be this circular look with a regular connected headband was replaced with suspension bands and a squared look.  It was different and it threw me off my game quite a bit.

Now in 2015, a new headphone engineered from Hifiman in China dropped itself off one day .  I knew it was coming but it got lost in transit earlier that week so I didn’t have any specifics for its arrival. But here it was in the here and now the Hifiman HE-400S.  T he newest entry to the HE line and the most affordable of them all as well. It’s the more affordable option priced lower the HE-400i. Priced at $299 it  competitive with units from Mr. Speakers, Beyerdynamics and Denon.

The new square look has replaced my mental image of the Hifiman line. What it hasn’t replaced though was the excitement of ripping open the package and seeing a new Hifiman. Bursting the brown cardboard shipping box open, I was met with the HE-400S’s retail packaging. It was the lightly colored rectangular box plastered with generic logos, brand pictures, and the works. What peaked my interest however was that it was in this nostalgic pull open packaging that you may find in older movies and years past. The slightly suctioned lid was removed by holding the box up from the ground and shaking it till the bottom came loose. Most manufactures these days have a slit, pull-open, or book design to their packaging. It was this fancier experience and memory from opening my first Apple iPod that really did it for me. I know as soon as it came out of the package that  I was going to have a good time with the headphone.

The Hifiman HE-400S’s build is near identical to that of the HE-400i’s but with material differences here and there. The headphone has the same scheme as the HE-400i; it’s a portly square chunk of metal and plastic. But whereas the HE-400i is a super glossy bluish-purple on the driver housing, the HE-400S is a semi-glossy light gray. I noted that these choices visually  striking  appearance  on the new luxurious looking  color design and how ‘shinny’  the new look  was made it different from other headphones currently s in price range and ‘class’.

Just like the 400i, the plastic housing is used in this design. On the 400S, the driver housing, driver attachment arms and the linkage bracket securing the driver to the metal headband suspender are  made from quality plastic. The headband is similar in design to all the new Hifiman line. The headband makes the headphone more comfortable and gives it its lighter feel thus making the headphone more comfortable.

The HE-400S includes a new removable cable attachment on the base of the housing.  Unlike prior designs  using a set of screw on connectors that always ended up twisting the headphone and  major improvement  over previous design. It is a dual set of 2.5mm plugs without any special connectors, gimmicks, or attachments. The new 2.5MM plugs makes people who like using aftermarket cables a breeze. This eliminated  the cable twisting issue and how troublesome  it was to remove or attach cables in previous designs .

Despite the fact that it doesn’t include any more retention attachments, the connector is solid.  No, your cable won’t plop and fall out from just walking around and yes it will unplug if you put weight on it if you sit on the cable and pull. This is something the old twisted connector wont do. I’d rather it unplug and fall out then to create a straining force on the headphone frame. I love this plug and commend Hifiman for solving the issue that plagued the prior connectors.

The cable on the 400S remains relatively unchanged. We are still given a nice outer braid textured cable with an angle 3.5mm jack. The cable maintains strength with its thicker than normal design while still producing flexibility for moving around. This time however, it terminates to the aforementioned 2.5mm cables on the two split off sides instead of the proprietary twist connector. The 2.5mm terminating sides on this cable do not exhibit any loose movement or build issues I could detect with my usage of it. I find the cable to be a great addition to the headphone giving it enough mobility for general use and durability for long-term hauls.

Planar Magnetics headphones are a god-send to headphones. Not only do their represent technology innovating on standard techniques (dynamic drivers), but also possibilities for the future in developing better solutions to accurate sound production. One of the costs for this achievement besides the obvious price tag is in driving it. An amplifier needs to have enough current and volts depending on the impedance of the headphone in where there is an inverse relationship of this need between high-impedance and low-impedance headphones.

For users with the 400S, they need enough current from the amplifier  to drive this low-impedance planar magnetic. In this case of drivability, the HE400S isn’t terrible but it isn’t optimal either. It can get decently loud with a general smartphone at full volume but not enough past that. I would recommend using a DAP or a dedicate setup with the 400S but you don’t need to go too crazy with the 22-ohm headphones. Amplifiers with decent power will drive the 400S easily.

The sound signature of the HE-400S  is balanced. It’s a fun headphone with a warm timbre and very dynamic elements. There really hasn’t been a genre or artist I’ve played with it that hasn’t’ come out at least ‘good’ with most being quite excellent in reproduction using the 400S.

The high frequency range of the 400s is one of the clearest and non offensive treble. Not many headphones in the sub $500 range do a high range that  is neither harsh or aggressive. Most headphones attempt  in this price range can be  extremely bright.  The 400S’s has the ability to not only hit that high but to keep the signal steady and clear. This can be heard on ELISA’s Euphoric Field where the higher end of the female vocal range and piercing background elements get the glory they truly deserve. The cymbals and quick violin ensemble hit all the right notes as they produce long and high-pitched music in quick succession. Just like the melody that the song creates, the HE-400S matches it with its elegant high-frequency reproduction. This is around the level of mastery that the more expensive  400i has and the less expensive 400S achieves.

The liquid vocals are a highlight listening to the 400S. Liquid in this case, means naturalness in the vocals and being unimpeded by other elements of the headphone and their frequencies. They have tremendous detail to each vowel that it makes it a joy to split apart what the artist is singing and bathe in their pronunciation. Egoist’s Extra Terrestrial Biological Entities displays these qualities well with their female singer Inori. Each breath she takes and  the warmth her words being heard takes vocal production to another level. The fine-elements of the song and how distinct each section is from the rest draws from the 400S’s abilities as a fun headphone to listen to0. While the vocals are fairly unimpeded and thus are liquid, there is a slightly darker veil on the midrange making them not as free to literally break from the headphone. While subtle the veil makes them a little less believable in vocal presentation.

Instruments on the 400S have similar deal to the vocals but with a twist. They aren’t failed by the 400S’s veil, but rather have everything going for them.hey aren’t as forward and bright as you would expect hearing about this slightly darker filter but this works out for them. It allows for much less ear strain on my part while still maintaining fantabulous (yep, I’m using this word). It’s pretty much what I would want to hear when listening to instruments on a fun go-getter headphone. This will not be liked by those that want unfiltered instruments though. To really hear a guitar rip or the whistling bells of tomorrow across a barren landscape you may want to check out the 400S.

The headphone doesn’t  grow with deep  bass but it does act as a great wing man. Like any great wing man, they gotta make you score.  In our case, they’ve got to help out its mid-range and high-range buddies play their game well. Thankfully they do just that with a nice reserved punch here and there. In songs by Lil Durk’s new rap album Remember My Name they produce a good enough low-end bump to keep the beats going but not enough to really get down with.

While you can’t tear up your private dance floor with the 400S while doing a few spins with Dr. Dre, you can enjoy their production qualities and sick verses. The 400S has its bass down to a fine quality of being there but not really trying to make the score like any good wing man will. It is barely there on clean songs from Angela Aki but makes a thump when Eminem drops. I would have liked a bit more personally,but for a universally fun headphone it  has enough to please most people listening to genres like classical, bass-light pop, rock, and others like it.

Overall, the Hifiman HE-400S is a favorite treat of mine. It hits all the right notes in my book for working with most that I can throw at it along with being comfortable. It solved most usability problems, is lightweight, and from one of my favorite manufactures. In another review, I noted the Fostex FA-011 as one of the best $200 headphones. Well it’s got a new friend with the HE-400S as the best universal sub $300 headphone I have heard to date. The Sennheiser HD650, AKG Q701, Beyerdynamic DT990 and Mad Dogs have nothing on this baby.

Whereas they all require auxiliary audiophile equipment to bring to full potential, the HE-400S comes organic. You don’t need a $600 amp or DAC combo to get it to shine. An Objective 2 or FiiO DAP is enough to get you great sound from the get go. Hifiman has really done something with the HE-400S making it my most preferred headphone out of the 400i and 560 in line. The others are superior in their key areas but the 400S’s multi-disciplinary sound fits the job. If you are looking for a great sounding audiophile headphone on a $300 budget, check these out. Just remember to bring your favorite album and tissues for the tears.