HiFiMan HE-R10P Headphone Review. The return of a classic! 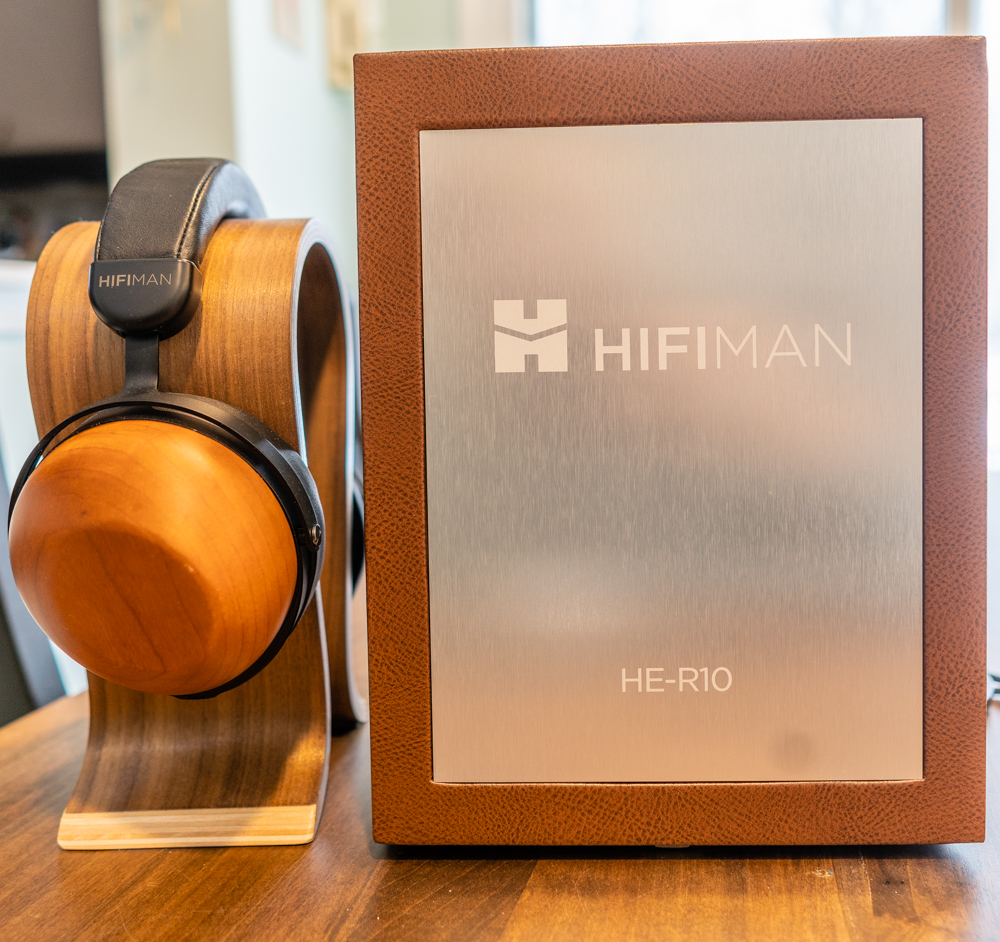 Sony in 1983 released the closed-back headphone the MDR-R10 with its bio-cellulose driver and wood cups offering an unusual and warm sound and innovative design, it was one of the most expensive headphones in the world priced at $2500.

The R10 was a neutral-sounding headphone that when first offered was a little light in the bass. Further revisions by Sony made the R10 available in a more bass-oriented model so the available models now included the bass light model as well as the better bass improved models.

The design was truly unique but some of the shortcomings included a closed phone that many listeners claimed was not all that private. Playing music at loud levels reduced the isolation and the headphones leaked. Sony in the late ’80s discontinued the model and in later years Denon issued a closed-back model AH-D7000 using a similar Foster made bio-cellulose driver similar to the one used in the R10.

The R10 became a legendary headphone that was discontinued and I first became aware of it in 2008 attending headphone meets in New York where one hobbyist had paid $6000 on the used market for a used pair in good condition. When I listened to the R10 for the first time I was taken with the decent soundstage that this closed design offered. I noticed that the isolation had leakage and the sound was more of an open sound much like my Denon D7000 which was available discounted by many for $699 pair.

The legendary status of the R10 was unique in that there were no other headphones selling used for up to 250 percent more than the original list with zero parts for repair available so it to this day remains a rare headphone that some collectors still have in their collections.

Fang Bian the founder and owner of HiFiMan is considered by many to be an inventor who many times thinks outside of the box and a planar magnetic driver creator decided to offer a limited edition HE-R10 as a tribute to the Sony R10. I believe Fang likes to push boundaries and therefore decided to use a planar driver that is efficient and can be driven easily by a portable player as well as by desktop headphone amplifiers.

The R10 looks almost identical to the original Sony design with its beautiful wood cups and leather pads, but unlike the original has a HiFiMan planar driver with a beautiful headphone band that makes this also a beauty to look at. The package features a beautiful carrying case, two cables for home use, and a smaller cable for portable use.

Terminated on the left side with a decent sounding cable with no noticeable deficiency during my evaluation, Priced at $5500 it is close to the cost of a used pair of Sony R10 but with a modern driver and a company who can do repairs if necessary.

Manufactured in China and using quality parts makes this an attractive offering for many with a price that many cannot afford especially in this tough pandemic-oriented marketplace with many out of work.

Fortunately, I was able to get a pair for evaluation for this review and it has made the last couple of months an enjoyable listening experience with many hours of evaluation and enjoyable musical enjoyment

Melody Gardot’s vocals on “If You Love Me” from her latest “Sunset in Blue” highlighted the outstanding transparency of the R10 midrange. The sound was crystal clear with excellent voice reproduction and free from any sibilance.  “Ninguém, Ninguém” has an excellent acoustic guitar arrangement and I could hear excellent detail with the R10. The soundstage, a HiFiMan trademark, was outstanding with excellent layering and sounded exceptional.

Charles Lloyd and the Marvels latest album “Tone Poems” has excellent melodies which replayed on the R10 with all the musicality I crave. For “Anthem” the sax was detailed and sounded musical while Bill Frisell’s excellent guitar was in the rear of the stage and musical. The Leonard Cohen tune came to life and was relaxing yet musically rich with detail and the soundstage was layered with the musicians defined in their own space, following Lloyd’s spiritual saxophone playing with beautiful tonality as if the instruments were all present in the room and beautifully played. Frisell’s guitar work was also outstanding. The sound coming from this album is a must-hear for music lovers looking for music to reach their inner soul.

Hilary Hahn’s “Paris” album showcases the violin and orchestra in “Poème for Violin and Orchestra, Op. 25” composed by Ernest Chasson is another excellent piece of music delivered in a layered soundstage, wide and deep,  by the Orchestre Philharmonique de Radio France and Mikko Franck. Hilary’s violin playing is outstanding and sounded delicate when the music called for it and at a low level on the Goldenwave GA-X amplifier, it comes to life through the R10. The outstanding Marantz SA10 DAC is detailed and has that magical Marantz sound. Never harsh the GA-X amplifier highlights the inner detail of instruments and the R10 with this combo is outstanding delivering exceptional musicality and a harmonic sound of instruments that never disappoints the listener and enriches me musically while listening. The sound is exceptional and the tonality of the instruments is accurate and sounds like instrumentation played in halls. Super sound delivered with believability and accuracy. Violin will bring out the worst in high-end but the R10 played the instrument flawlessly. Outstanding sound!

“I’ve Got You Under My Skin” from Willie Nelson’s “That’s Life” album, a tribute to Sinatra, showcases Willie’s voice now 88 years young and is losing some of the magic of his best years. The R10  was able to show the differences in this tune recorded by Willie.

His best years passed and the R10 was able to show what was misisng in his earlier recordings, but his guitar work is still excellent, and the R10 showecased his guitar and is a great instrument abd tool as it is accurate and balanced and won’t hide any shortcomings in the recordings.

“Bad Guy” from Billie Eilish’s Grammy-winning album showed the bass on the R10. Similar to other HiFiMan planars never boomy the bass is textured and turning up the GAX amplifier once again the bass was thumpin’ on this track always lively with excellent texture and her vocal was outstanding. The music was alive and made me tap the feet and the dynamic sound of the R10 came to life on this track and delivered an outstanding performance. The electronic sound of the Bad Guy was outstanding.

Listening to Mick Jagger singing “Brown Sugar” brought the Rolling Stones into my listening room with excellent rhythm and the majestic rock ability of the Stones was lively and just rock and rolled through the album in its entirety and brought back memories of listening to the Stones live in concert. The R10 once again performed admirably and showcased Jagger and the Stones with that realistic live sound I often hear at live performances.

Switching to Pink Floyd’s “Wish You Were Here” the acoustic guitar is outstanding with excellent detail and the body of the instrument is all present in the recording. The vocal performance is outstanding and the tune is one of my all-time favorites and hearing this on the R10 brought me back to hearing them do this song live.

Pink Floyd’s performance and Gilmore’s guitar work were delivered on this recording with conviction. The music was layered and well recorded and this track is outstanding and dynamically reproduced with outstanding musicality by the greatest rock band ever assembled. Floyd lovers will love the Replaying the catalog of Pink Floyd through the R10.

Fang Bian has always been a high-fi maverick and creating a limited edition of the Sony R10 is his boldest move. The R10 is a legendary headphone introduced in the early ’80s for a retail price of $2500 and selling on the collectors market for upwards of $6000 in today’s market and is not supported by Sony. If parts are needed as they are now almost 40 years old, the headphone user will have a difficult time getting it repaired.

The original R10s were offered in two versions, one was bass light, the HiFiMan HE-R10P is not bass light, but is still more textured and accurate.

The offering is $5500 for the limited edition. The sound is exceptionally balanced and the cups are almost identical to the original offering. The main difference is the planar drive in this new R10. The sound is well balanced and accurate. The closed version has that terrific soundstage that I find in better designed closed headphones.

The sound leaks at high levels, so it is not the best in isolation, but at normal listening levels people next to you will not be annoyed. The soundstage is impressive for a closed headphone and the sound has the HiFiMan house sound but this R10 is exceptional at recreating inner detail and musicality.

Listening never disappointed me and the inner detail retrieval was welcomed while the musicality is exceptional and always truthful to the recording.  Is the price expensive? That’s is surely a question only the listener will be able to answer.

The R10’s stellar performance is welcomed in a closed headphone and for me represents a remarkable achievement in a closed design. If you’re looking for a soundstage with excellent layering and midrange and treble that is exemplary this transducer delivers a stellar performance that is always magical with a dynamic sound that will let you listen for hours without fatigue and delivers.

The R10 gets a big thumbs up for being a headphone that will leave the listener smiling with how accurate and musical it delivers recordings and makes them alive and breathtaking. Big thumbs up to the Maverick for taking a big chance on bringing this to market. The R10 is a closed design that is exceptionally made and exceptionally musical. Highly Recommended.