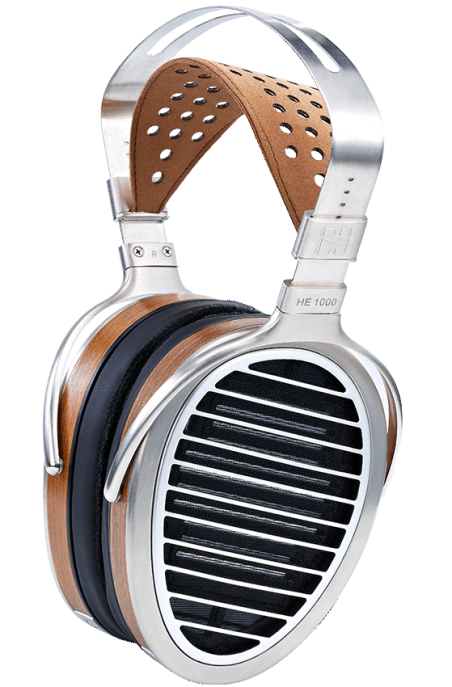 HiFiMAN first started out as a simple thought in a young man’s mind. A quasi-vision that was molded, shaped, and revisited a thousand times, until it finally became what we know it as today. They are currently a premier audio component manufacturer, who has opened a massive portal into our lives, which enriches and improves the way that we enjoy our music.

I met and became close friends with Fang Bian in 2007 (before he was Dr. Fang Bian), when he started attending my local NYC “Head-Fi” Meets. The meets always held a “silent auction” at the conclusion, where vendors who attended (some, only in spirit), donated to us some of their company’s wares to auction off to attendees to help fund the meet. It was and still is, a win-win for everyone in attendance. Fang and his company, formally known as Head-Direct, was more than generous, giving us a handful of earbuds or whatever was his flavor-of-the-month that they were selling to their customers.

In the mid-2000’s, there was a lull in the manufacturing of upper echelon headphones that audiophiles could purchase new, which was not keeping pace with the new wave and flux of a bold and exciting generation of CD players, DACs, headphone amps, along with their associated components. Tenured studio recording engineers like Rudy Van Gelder and Steve Hoffman were going deep into the cold, temperature controlled vaults of yesteryear, seeking out great recordings that were originally “dumbed down” to what was commercially known and available to us on recycled vinyl (due to the early ‘70’s oil embargo), noisy cassette tape, and the newer early ‘80’s introduction of the CD. They painstakingly sorted through endless caverns of archived music, which held, locked away in the deep dark reaches, the great original analog tape masters of well-recorded albums. They chose the masters that were worthy of being reintroduced to audiophiles, and carefully crafted re-masters of them. With the advent of SACD and DVD-Audio technology hitting the shelves, along with newer 24bit technology, which trumped standard Redbook 16bit/44.1kHtz productions, record labels started reintroducing this music to us, in all of it’s intended, musical glory.

Music lovers were on a constant quest to acquire headphones that were good enough to compliment all of this prodigious new technology and recording excellence.

Older TOTL (top of the line) headphones were in demand, at outrageous markups, and we sold our souls to get them in our homes. Headphones like the Grado HP-1 and 2, Sennheiser HE90 Orpheus, Sony R-10, AKG1000’s, etc. were all the rage. They bounced around from head to head, offering a better listening experience to what were the two current popular higher end brands known as the Grado RS-1 and Sennheiser HD600. Sure, good headphones were coming out in dribs and drabs, trickling down to us like water from a rusty faucet in the middle of a drought-ridden oasis. It was quickly realized that electrostatic headphone technology, in contrast to the more common dynamic driver style, was very capable of exceedingly impressing us with their ability to satiate our senses with creamy mid-range, sustained upper registers, and gobs of detail. But alas, who was still making this technology? You could spend $7500 and get an Orpheus that formerly sat on more different heads than a Babylonian whore, or buy an age-old Stax model, but both of these also required, selling the farm to fund a dedicated independent home setup, along with a stat-capable amplifier.

Enter Dr. Fang Bian into this seemingly dire, era of headphone drought. In 1996, while 17 year-old Fang was pursuing his Bachelor’s Degree in China, he didn’t have visions of sugarplums and ice cream. Rather, he had a burning desire to be a part of the blossoming Japanese portable audio market, which started in the early 1980’s and was inevitably back swimming over to China’s shores. When Fang was 21, he went on to pursue his Master’s education at Nankai University, in Tianjin, China, which is one of China’s premier research universities. Fang had a special interest in the Sony Walkman portable revolution. This pioneering movement had started out in Japan in 1979 as a cassette player, and had matured into CD technology by the time he started to dip his toes in the uncertain waters that would eventually become his passion and career.

China was getting paid in 2000, to absorb barges of electronic waste from Japan and America. As fate has it, Nankai University was situated near to the seaport where the barges would offload. Savvy Chinese businessmen would buy up the items by the boatload, set up shop and sell them there, in what we might call a flea market. Every weekend Fang would peruse through the Seaport’s disposed wonders of other’s discards, which were soon to become another man’s launching pad, teaching us never to burn a bridge that might open a door for us in the future. Dr. Bian would disassemble the parts from the buffet of components that came from the inoperative Walkman’s, along with their cables and earbuds, and concocted his own mad-scientist experiments. He would re-engineer new components from his scavenged parts, building no-name goodies and delicacies, from the ground up. Fang participated in Chinese Audio Forums (similar to Head-Fi) before they were popular in the States. He repaired, modded and sold his creations on those Chinese audio forums websites. His writings and contributions became popular on the forums and he started to become known somewhat as a “Walkman expert”. Editors on an E-Fashion Digital Magazine (China’s biggest digital magazine) noticed his work and asked Fang to write a book on the history of Walkman, Discman, and headphones in 2003.

That same year, after earning his Masters Degree at Nankai University, Dr. Bian was given an opportunity to come to Boston, MA for a Fellowship and earn his PhD. in Nanotech Chemistry. In 2005 he then transferred to NY to the CUNY Graduate Center, where he wrote his thesis, aided by teaching chemistry in Hunter College and performing Nano experimentation in Hunter’s lab. This is where he first got his ideas working with the diaphragms needed for Electrostat headphones. Up until then, Head-Direct had only been only earning a living distributing other manufacturer’s products. They sold earbuds from Yuin, like the PK1 and PK2, and VSonics, like the VS-R02. Then they started to manufacture and sell their own innovations, like their first RE-2 earbud.

Next came other earbuds, like the improved RE-1. In 2008, a car audio company (from the west coast of the U.S.) complained to them that the name “Head-Direct” was similar to their direct sales company. Fang obliged, and changed their trademark and company name to HiFiMAN, as we now know it. I will call them HFM for the remainder of this intro.

In 2007, at a bi-annual Head-Fi Meet in Babylon, NY, Fang and I were discussing how there was a deficit of top tier headphones available to us. This is when he began to help me imagine his long-time vision. He described to me, how he was working with Dr. He (the prefix of “HE” in the product line) in China, on creating a brand new Electrostat headphone, to be used with the great stat amps that were being produced by the likes of amp designers like Dr. Kevin Gilmore (KGSS, etc.) and Justin Wilson of HeadAmp (manufacturer of Gilmore’s famed Blue Hawaii). This first new headphone was to be known as the “Jade”. I handed him $1100 and told him that I desired the first one. When the vision came to fruition, it was an engineering marvel, featuring a diaphragm that was boastfully thinner than what Stax in Japan was producing. The only problem was, that it was very susceptible to environmental conditions, and any impurities or vast temperature swings, caused a crackling sound in the earpieces. Back to the drawing board!

Months went by, and while I visited friend’s homes and Head-Fi meets around the country (as I usually did each year), this time showing off to everyone my one-off pair of Jades, offering a look-see, Head-Direct was in the kitchen brewing up a better, more improved, less susceptible model, soon to be known as the He-Audio HE 1.2. Unfortunately, when that model was released, and was in the hands of many patient and eager early adopters, it also exhibited sound problems from environmental changes that occurred somewhere between China and America. The technology was too fickle!

Fang and company were at wit’s end, and was also losing a lot of capital. But, as with many failures that we have learned of throughout the centuries, this “one step forward, two steps backward” business fiasco, created even more fortitude, and out of the dark abyss of inevitable failure, sprung the idea to move forward using magnetic planar technology in it’s place! No need for specialized electrostatic bias voltage amps. But with all change comes new challenges, and these headphones required the need for an amp with an abundance of power to charge the powerful magnets required to drive an ortho-dynamic headphone.

This is what started the humbling beginnings of HFM’s first magnetic planar HE-5. The technology transitioned along the way, each model offering better sound, lighter weight, and less wattage requirements. All the while, paving the sonic path toward why we are here talking and reading today.

Timeline: At CES 2009, HFM introduced the original model HE-5. Unfortunate cracked wood housings led to the improved 2010 HE-5LE. In late 2010 the HE-6 premier model arrived. Offering a single-sided magnet array to lighten the weight, out came the HE-4 in late 2010. With lighter weight than the HE-6, improved mid-range presentation, and less power requirements, the HE-500 was released in early 2011. In 2012, the HE-400 and HE-300’s came on the scene. Since then, some of the models have been updated and re-released. In May of 2015, the Beta version of the HE-1000’s were shipped to Beta testers, and in June 2015, the production version started showing up on audiophile’s doorsteps.

*Author’s note: Recently, Fang informed me that he did indeed find a solution to the problems that they ran into, when manufacturing the Jade Electrostat headphone. With a coy, devious look on his face, similar to a cat with a tasty mouse in its mouth, Fang confided to me that he figured out how to make reliable diaphragms as early as 2011 after he completed his PhD degree. I don’t want to let the cat out of the bag (or the mouse out of the cat’s mouth), but I can safely say (spoiler alert) that HFM will be releasing a new electrostatic headphone soon. Ooh! Oh my!

a.k.a - Immtbiker (Moderator on Head-Fi). Aaron's audio addiction started in 1969 when he bought his first cassette player with the Beatles White album from money saved on his paper route. He knew then, that audio was going to consume his life. He started his illustrious career selling home audio/video while getting his degree in engineering. Aaron has since embarked on a lifetime musical journey, that has constantly fulfilled his needs to be at one with music and all that it represents.

Latest posts by Aaron (see all)