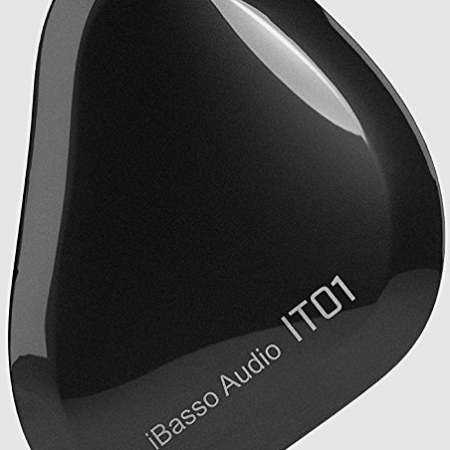 It was early in the morning when I arrived at CanJam NYC this year. I took a quick look around the exhibitor floor and plotted out my plan for the route I was going to take. iBasso had a stand at the very front of the room manned by some volunteer Head-Fiers. They were my second stop for the day after RHA and it was there that beneath a pile of expensive equipment, I found a gem.

The representatives (jamato8 and icefalkon on Head-Fi) were introducing me to all the new iBasso DAPs and balanced armature IEMs. Off to the side, however, I spotted an earphone with blue and red ear housings and it was then that with a twinkle in their eyes, they acquainted me with the new iBasso IT01 IEMs. They sported a beautiful solid coating on the outside with a gorgeous copper cable terminating it. Surely it must have been expensive, say at least $300? They laughed before telling me it was only $99 and came with 13 sets of tips and a hard carrying case with a detachable MMCX connector. My jaw literally dropped and at that moment, I knew I needed a listen, but let’s save that story for later.

Besides being a connoisseur of the arts of fine audio, I also try my hand at reviewing unboxings as well. How well a company packages their product, presentation, and ease of getting the good stuff out all burn deep within my heart.

My experience with the retail packaging for the IT01’s was positive and iBasso scored splendidly in this regard. The brushed white box with a slight accent of gray in it was both solid to the touch in terms of structural integrity and design. It was minimalistic and contained just the information you wanted on the front. The back, on the other hand, was a battle of eight languages fighting to describe the specs and a short features list.

The actual box is actually stuffed inside the outer shell which easily pulls away. It’s a dark blue chest design with a charming stamped iBasso logo in the middle. Inside, the presentation of the headphones is cordial and beautifully laid out. The drivers initially come detached from the cable which you will find in the metal case.

The IT01 come with a fair amount of stuff. You get the headphone as seen with the two detachable driver units and helical cable. The metal case is of course included and so are the bags of 11 tips inside them. Adding up the tips that come pre-installed on the headphone and we get a total of 12 different tips. iBasso provided a foam tip set but I found Comply TS 400 mediums to be a better fit for me.

The IT01s are sensitive and require a good source to eliminate hissing, noise, distortion, and added background noise. The versatility of this headphone is therefore dropped slightly as it was unbearable for use with consumer laptops or phones; the hiss was too much. You don’t commonly see these issues in $100 earbuds so it actually ends up being a nice #firstworldproblem situation. Where although the event is a nuisance, it also brings light to the fact that this event generally correlates with higher quality IEMs.

The sound signature of the headphones was warm with a dark background and a bassy kick. Vocals came across as slightly veiled and while fairly clear, lacked the finer micro detail production. Upper mids were stronger with nice sparkle up there and it finishes off with nice highs albeit with a roll off. The soundstage is of moderate size.

Starting off with “Hotel California” by The Eagles, we instantly get a dose of the dark sonic background as we are enveloped into the story of this song. The mid-bass has an attractive thump to it and offers a fantastic backing to the instruments. It does at times, however, come on slightly too strong from a neutrality standpoint. Users that enjoy a potent dedicated bass to their music will absolutely love this. As for sub-bass, it is also present but not in the same amounts as the mid portions. It brings a subtle rumble to the song but lacks a full enough body to complete the bass line at the beginning of the song.

Vocals have the same amplitude as surrounding elements but have a veil around the mid-speech portions. This covers up the detail but makes for a more forgiving listen. If I was to visually describe the vocals, it would be an 80s curvy coke bottle. There is fuller body to voices along the bottom and top but with a slight ingress in the middle where the meat is.

Instrumentals had great separation and macro detail was definitely a high point. Each strum of the guitar and quick transitions had sparkle to them. They were not as sharp or pronounced as I would have wanted but struck a good balance for an engaging yet also soothing experience thanks to its mellowness.

Next, listening to “Thanks to You” by Boz Scaggs brings us an insane stereo production of bass. It actually sounds like a real 2.1 speaker setup with a dedicated subwoofer to it. It attacks at the lower ends like a singular entity as if it was, in fact, a real sub. The energy here does cause for some escape into the mids but not as a muddying artifact but from the mid rumble this song produces. This could be from the driver technology iBasso has incorporated in; it uses a 5-micrometer multi-layered graphene diaphragm on dual Helmholtz resonators. In most other headphones with this amount of midbass rumble, the dynamic driver would start resonating with a breakdown event on the diaphragm surface causing muddying of the other frequencies. The IT01 pulled through here like a champ.

Finally, we have “Koko Kara, Koko Kara” which is the ending song for hit tv-show A Place Further Than The Universe. I wanted to test the speed and energy of the IT01 which this song has plenty of. Transition and vocal energy were fair in my tests and while enjoyable, didn’t bring out the true feelings of the song. The song features four female singers in sync with frequent tonality changes that the IT01s were so close to, yet unable to capture.

The IT01 pack incredible cohesion in its sound for a complete experience without the fatigue or BS of add-on techno jumble others have. It simply provides you some background on the driver technology within and sets you off on the journey to discover them for yourself.

So what did I think of the IT01 sonically in the end? I was critical of it in some portions of my review after all……. And that’s because I freaking love it. I loved it the moment I heard it at CanJam and found out it was only $99. I went on Head-Fi to see what others thought of it and noticed some users complaining that this wasn’t the perfect IEM some other’s short impressions made it out to seem. Some were jaded that it wasn’t the prince they were looking for from what they read.

And that’s because it isn’t. It’s $99 for what looks to be a $400 IEM complete with the same high-quality housing mold you see people with customs using with the same MMCX connectors and beautiful stranded cable. It’s not rocket science that these aren’t going head to head with behemoths in our world of audio.

And so here I am a month later with a more analytical look on the IT01. There are failings to this unit without a doubt, but I found the portions I liked, especially at the price, more than made up for the issues I heard. I would like to take a look at this headphone from the point of view of Macklemore and say, ‘but shiiiiit, it was only 99 dollars!’. Sure, there are some hundred dollar products that can sound a bit better, but they sure don’t have the vertical integration of housing, cable, and tips that the IT01 come with.

Everyone wants something that looks and feels just like the big boys. From Head-Fier’s with humble beginnings lusting after custom IEMs to motorcycle enthusiasts wanting a race-ready look, this fact has always remained true. The new Honda CBR300R’s aesthetic redesign changed the landscape when they gave their entry level bike the same aggressive look as the one 4x more expensive; it sold like hot cakes.

iBasso has given new and budget-conscious headphone audio enthusiasts the same ability with the IT01s which is incredible. It not only makes our hobby more accessible to newcomers but also more inclusive as these will be more visible to the public eye. These units are sexy and have drawn the eyes of everyone I have walked around, it only takes a question from them for a conversation on headphone audio to start. In a world riddled with Beats as fashion icons, these affordable, yet expensive looking headphones will spark the conversation giving others a look into the real world of headphone audio. Many custom IEM users don’t bring their units outside. With the affordability of the IT01, everyone can slam on a set and walk around and do their business.

The iBasso IT01 are simply my favorite IEMs for under $150 at the moment for the value they bring as a complete package. They are gorgeous and feature a cohesive sound signature making them a great choice as a daily driver. My go-to recommendation for non-audiophile friends is the iBasso IT01 from now on. Simply phenomenal value.